The ASUS Transformer Pad TF103C is a surprisingly snappy tablet ASUS is very well known for its convertible, hybrid devices, ever since its first foray into the Android ecosystem with the original Eee Pad Transformer in 2011. Ever since then, the company has been releasing a multitude of hybrids, ranging from phablets in the PadFone series, to even Android/Windows-capable devices in the Transformer Book series. Recently at Computex, ASUS also brought out the Transformer Pad TF103C, a 10.1-inch hybrid device that is aimed at serving the budget segment of the market, all for just S$399.

Like many of ASUS' other hybrids, the TF103C comes in two parts: the tablet itself, and a keyboard dock. Upon unboxing, the TF103C reveals itself in the "notebook" form, that is, the tablet and keyboard dock combined together. The case is made of plastic, with a good black texture reminiscent to that of the Nexus 7 or the Kindle Paperwhite. 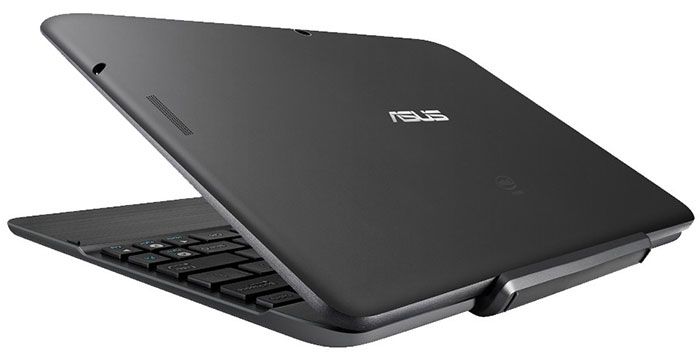 The TF103C weighs at 1.1kg with the dock, which is comparable to the weight of an 11-inch MacBook Air. Probably due to its smaller size (vs. the MacBook Air), the TF103C feels denser and chunkier. In addition, when closed, the hybrid resembles that more of a slim netbook than an Ultrabook. At 1.98cm thick when docked, it is thicker than the MacBook Air and devices in ASUS' own Zenbook series.

On the tablet portion of the hybrid, the micro-USB port and microSD slot are located along the left side. The power button is located conveniently on the top left side, with the earphone jack on the right side of the screen. The speakers are situated the back left and right side respectively. On the keyboard dock, there is a USB 2.0 port for users to plug in their mouse or mount a USB storage device. In essence, much like how Samsung pitches its high-end Galaxy Note Pro Android tablets, ASUS thinks that its budget hybrid can be just as productive. 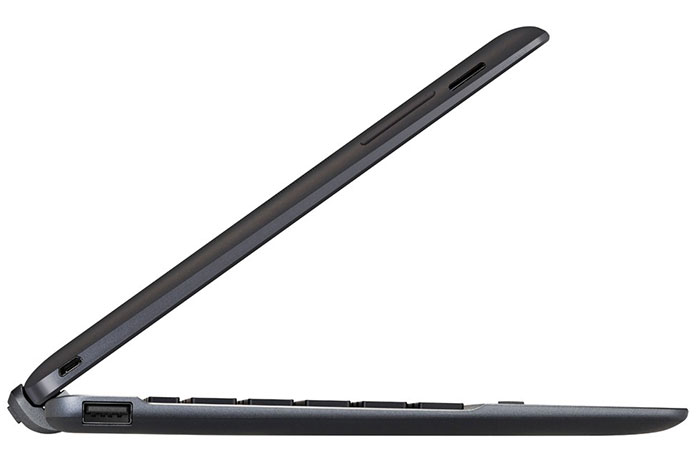 The TF103C has a rather huge docking mechanism. Due to its thickness, the whole hybrid is unable to fully lie on a flat surface. Thus, without the full grip on the surface, the TF103C feels like it is floating even when laid on surface. It is however easier to dock and undock than previous Transformer models.

When undocked, the TF103C looks like just any other tablet, with inch-thick bezels surrounding the 10.1-inch screen. Weighing at 550g in tablet form, the tablet feels heavy in the hand. Its 9.9mm thickness is also rather thick.

Speaking of the screen, the TF103C sports a 10.1-inch IPS LCD screen, with a 1,280 x 800-pixel screen resolution, yielding a pixel density of 149ppi. The low resolution means that pixelation is rather obvious when you're using it as a tablet (because you'll be holding it much closer to you). However, it becomes less of an issue when using it as a notebook, since your eyes will be looking at the screen at a further distance. 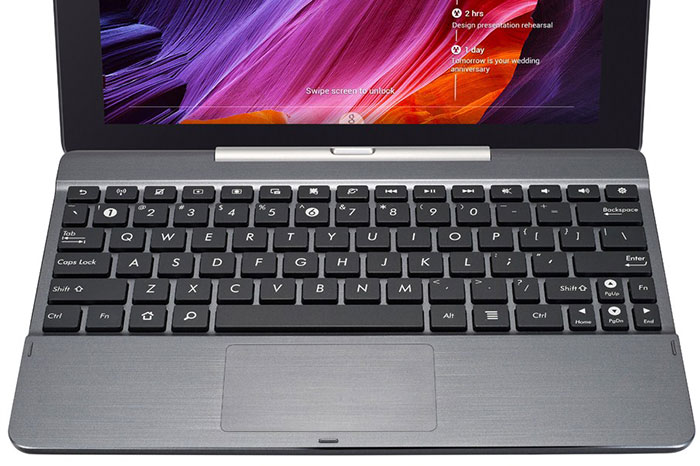 The keyboard dock sports a brushed metal finish. The layout is that of the typical Android keyboard layout, and it also sports a touchpad. Keys on the keyboard feel slightly soft and small though, but are still quite comfortable to type on. One major difference that sets the TF103C's keyboard apart from previous ASUS hybrids is the lack of an external battery in the keyboard dock, which means it draws power from the tablet instead. The pro is that the whole contraption is lighter, but the con is that you don't get additional battery life with the dock. 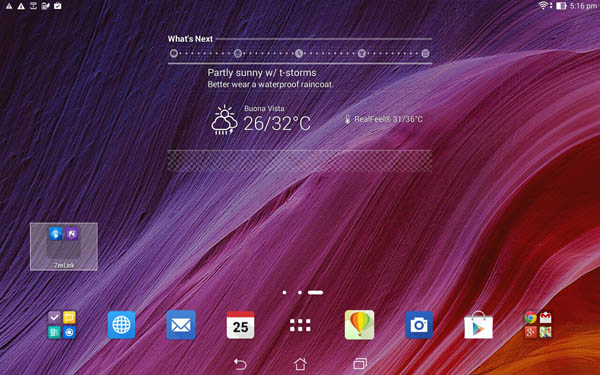 The ASUS Transformer Pad TF103C comes with Android 4.4.2, with ASUS' ZenUI as its UI overlay. Many of the ZenUI features here are the same as what we saw in the ZenFone 5 (without the phone portion, naturally). You can also check out this dedicated article where we detailed the five key features of ZenUI.

Here's a short clip from ASUS demoing the ZenUI:

Last but not least, the TF103C comes with 16GB of in-built eMMC storage. However, 5.14GB is taken up by system files, thus leaving 10.86GB of usable space. As mentioned earlier, one side of the tablet has a microSD card slot (supports up to 64GB) if you need to expand the storage.