ASUS’ ROG (Republlic of Gamers) sub-brand has grown to become a force to be reckoned with in high-end computing market. Today, the ROG lineup runs the entire gamut of computing hardware and products ranging from motherboards and graphics cards to notebooks, gaming mice, sound cards, storage and even monitors. And no matter what the product category, users can rest assured that if it is an ROG product, that means the bleeding edge of technology.

Today, we turn our attention to monitors and to be fair, ASUS’ has been offering gaming-grade monitors for some time. For example, the 24-inch VG248QE has been popular with gamers thanks to its impressive specifications - 144Hz refresh rate, 1ms response times - but it was not an official ROG product. 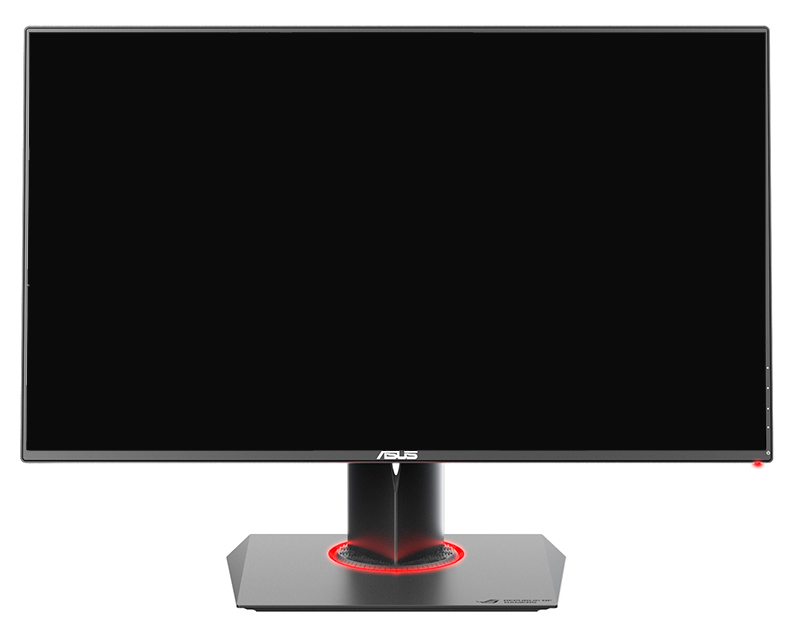 Fortunately, ASUS has just introduced a new ROG monitor, the ROG Swift PG278Q. We actually reported about this monitor as early as January this year, but production issues have delayed its launch. But now that it is finally here, let’s find out if it has been worth the wait. 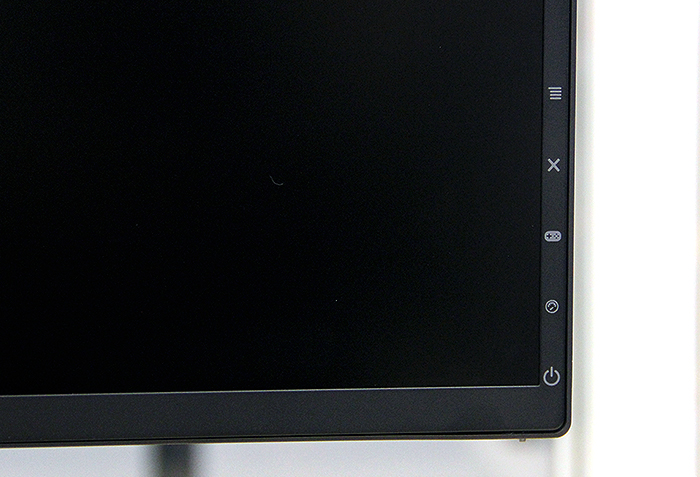 The first thing that strikes you about the ROG PG278 monitor is how thin the bezel is. The sides as well as the top measures just 7mm, while the bottom is slightly thicker at roughly 1.2cm. And as you reach out to adjust the display, you would find that the display itself is actually pretty light for a 27-inch monitor and that its stand allows for a wide range of adjustment. The stand adjusts not only for height and tilt, it can also swivel on its base and pivot, allowing users to use it in portrait mode for surround gaming. Speaking of which, the stand also features a base with intricate geometric patterns that light up when the monitor is powered. The base has rubber feet that gives the monitor is a firm stance, making it easy for users to adjust the display to their liking. Round the back, users will find slanted cuts that double up as vents to help keep the monitor cool during marathon gaming sessions. 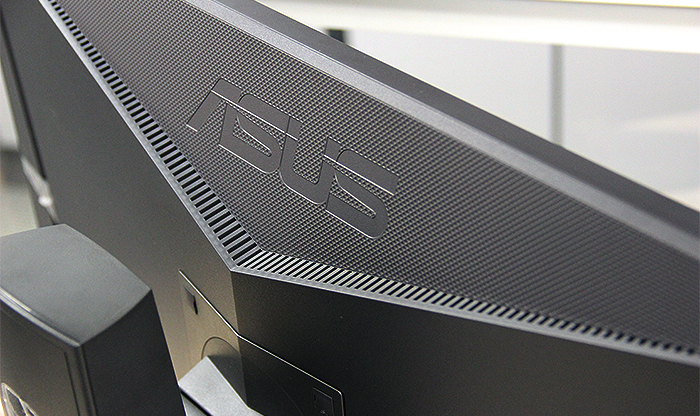 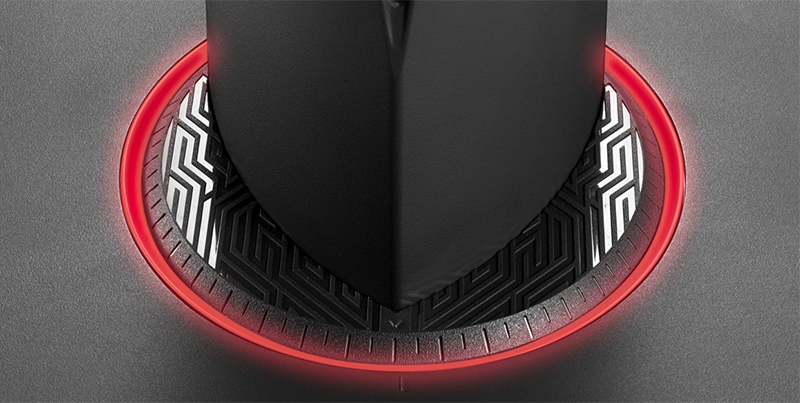 The ASUS ROG Swift PG278 looks great and we are thankful that the design team did not go overboard and make it look too outlandish. We think most gamers would be happy to have a monitor looking like this at their desk. Additionally, overall build quality is good and the stand is especially well-engineered, it feels fluid to adjust and yet retains just the right amount of firmness in its actions.

Moving on, the ROG Swift PG278 monitor is choke-full of cutting edge monitor features. To begin, the ROG Swift PG278’s display has a diagonal measurement of 27-inches and a native resolution of 2560 x 1440 pixels. It uses a TN panel for maximum responsiveness and it has a rated grey-to-grey responsive time of just 1ms. It also supports an ultra-fast refresh rate of 144Hz - typically most monitors have a refresh rate of just 60Hz. It also has a matte finish, so no reflections and glare is kept down to a minimum.

Speaking of refresh rates, the key feature of the ROG Swift PG278 is its support for NVIDIA’s G-Sync technology. G-Sync was announced late last year and addresses the incompatibility of a GPU’s draw rates and a monitor’s refresh rate. This incompatibility is the cause of stutter, lag and tearing. Inside the ROG PG278 is a special chip that synchronizes both the GPU and monitor refresh rates and the end result is that the monitor will have a variable refresh rate that can range from as low as 30Hz to as high as 144Hz. However, do note this requires a compatible NVIDIA graphics card, GeForce GTX 650 Ti Boost and higher. We will elaborate more on G-Sync further below.

It also supports two NVIDIA other technologies - 3D Vision and Ultra Low Motion Blur. 3D Vision has actually been around for quite some time and we first wrote about it five long years ago when we reviewed the NVIDIA 3D Vision Kit. The technology still works very much in the same way though we have now come a long way in terms of game and driver support and also performance, thanks to faster and more powerful graphics cards. Additionally, the ultra-fast 144Hz refresh rate of the ROG PG278 should also come in handy for anyone who is into 3D gaming. On the other hand, Ultra Low Motion Blur is a new NVIDIA technology that reduces the effects of motion blur that you sometimes see on slower 60Hz monitors, especially when there is fast scenes being displayed. 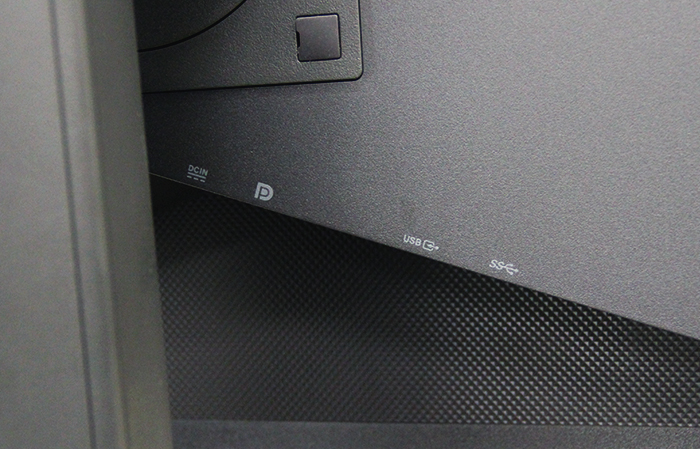 As for inputs,  the ROG Swift PG278 only offers a single DisplayPort, which is a bit of a downer. While only the DisplayPort interface has sufficient bandwidth to support the ROG PG278’s high resolution and refresh rates, the inclusion of HDMI or even dual-link DVI ports would make it easy for users to plug multiple sources such as a gaming console to the ROG PG278. The monitor also conveniently features two USB 3.0 ports, but their usefulness is negated by how difficult it is to actually access them. It would have been better if they were located at the sides of the display rather than at the back. 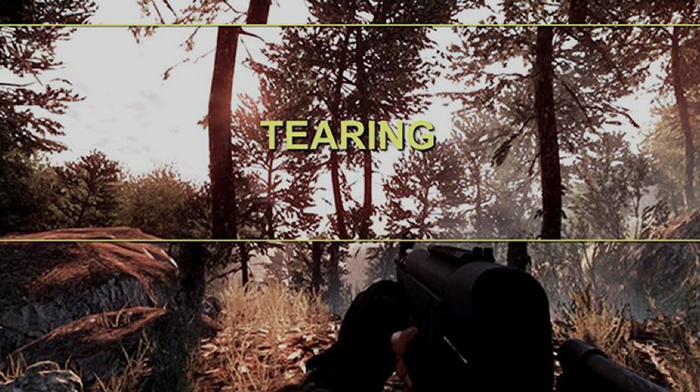 To understand how G-Sync works, it is necessary to understand first that monitor refresh rates are typically fixed. For example, if a monitor has a refresh rate of 60Hz, this means it refreshes its screen 60 times a second or once every 16 millisecond. However, as we all know, a GPU rarely renders frames at a fixed frame rate. Depending on the scene and load, a GPU’s frame rates can vary wildly and greatly. The incongruous nature of the GPU’s frame rates and the monitor refresh rate is why we experience tearing, lag and stuttering images.

Looking at the top most graph, we can see that the GPU is rendering frames at a rate that is asynchronous to that of the monitor’s refresh rate. What happens then is that the GPU presents the frame even before the monitor is ready to refresh itself and this causes tearing. There are existing technologies that are used to overcome this and you might have probably heard of V-Sync. What V-Sync does is that it forces the monitor to only accept a new frame from the GPU only when its refresh cycle is up. However, as can been seen in the graph directly above, since the GPU does not render every frame at an equal speed, this can cause lag and stuttering images. That is not to say that V-Sync is not useful, but its effectiveness is limited in instances only when the GPU can consistently render faster than the monitor’s refresh rate.

The on-screen display (OSD) controls are located on the bottom right of the display and features what ASUS calls a “5-way OSD Navigation Key”. This special key works like a joystick and is really intuitive to use, which is a joy because some monitors have really fiddly and confusing controls. 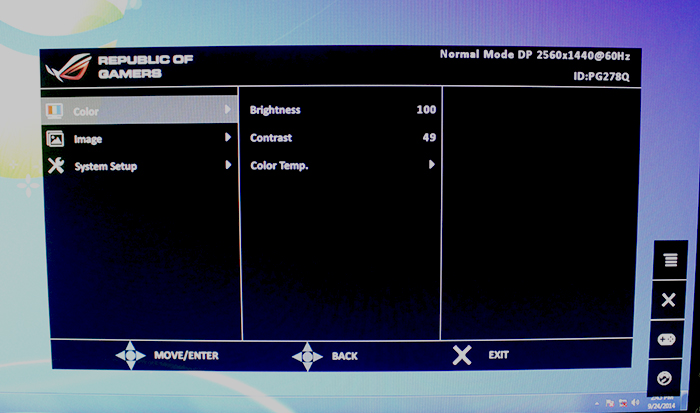 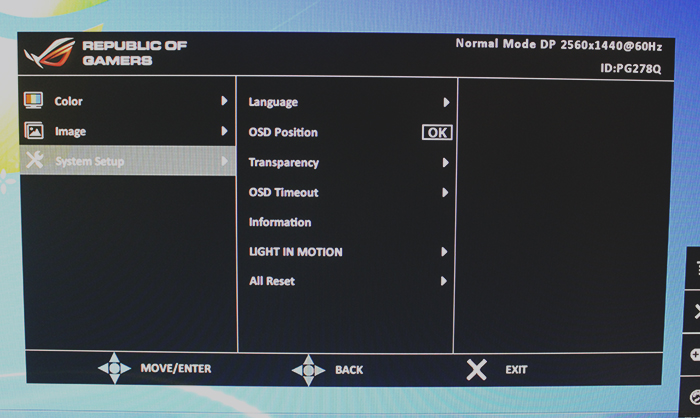 As for the options, the ASUS ROG Swift PG278 features the usual brightness and contrast settings as well as a colors setting with various presets and a custom mode for more picky users. 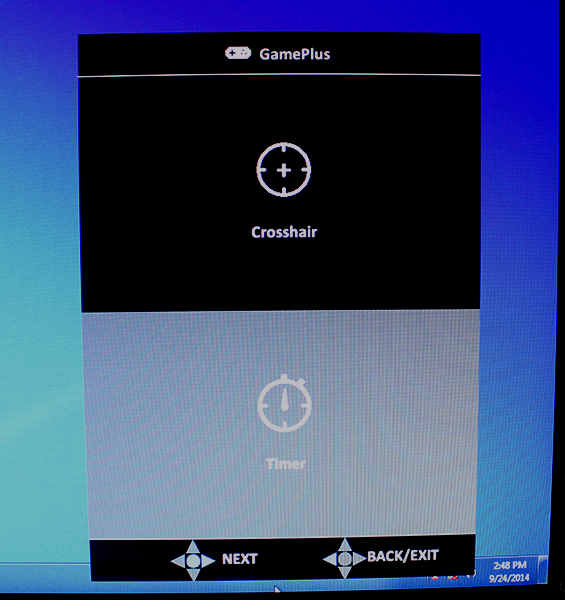 There also a GamePlus button that lets users quickly put a permanent crosshair overlay on their screens. Obviously, this will give gamers an added advantage when playing FPS games (quickscope anyone?). GamePlus also lets users put an on-screen timer, which can come in handy for RTS or MMORPGs.

And finally there’s a special Turbo button that quickly switches the monitors’ refresh rate. Users can pick from 60Hz, 120Hz and the maximum 144Hz. This changes the ROG Swift PG278's monitor on the fly and the switch is almost instantaneous, with only a slight pause before the new refresh rate takes effect.

Write a Review
Compare This | Specifications
Incorporates G-Sync technology
Easy to use controls and OSD
Well-engineered stand
Thin bezel
Fast and responsive pixels
Only a single Mini-DP input
Out of box color accuracy only decent
G-Sync only works with NVIDIA GPUs
Very pricey and it's not a 4K screen
Our articles may contain affiliate links. If you buy through these links, we may earn a small commission.
Sponsored Links