The Strix strikes back 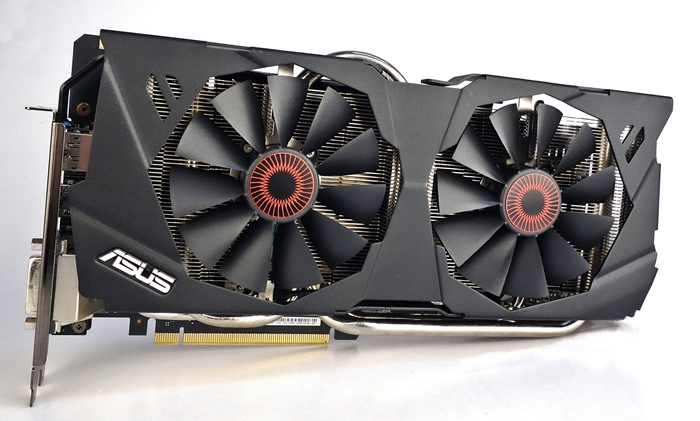 To do just that, the ASUS Strix GeForce GTX 980 features the GM204 GPU that has been factory overclocked to operate at a base clock speed of 1178MHz, and a boost clock of 1279MHz (up from 1126MHz and 1216MHz respectively on a reference card). Its 4GB of GDDR5 video memory operates at the default clock speed of 7010MHz over its 256-bit wide memory bus. The overclocked GPU takes advantage of its 10-phase Super Alloy Power (SAP) VRM system, with fine-tuned digital power delivery, for stable and reliable operation. 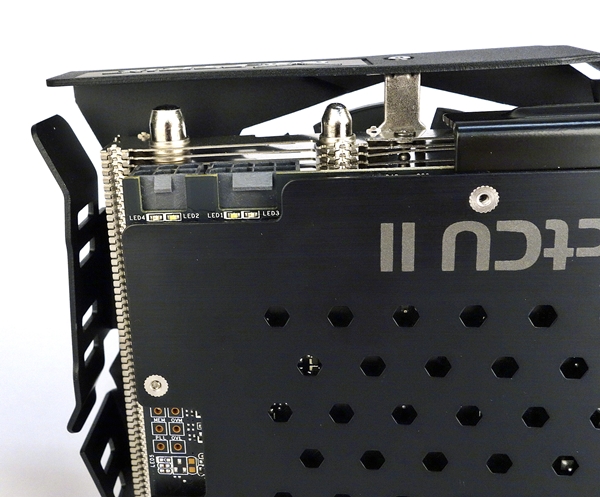 Speaking of power, the card draws juice (up to 300W) from two Molex PCIe power connectors; one that has 6 pins, and the other, an 8-pin one. They have LED indicators on the PCB to indicate if their corresponding power cables have been installed properly. When the system is powered up, the LEDs will glow red if the cables are absent or not properly inserted. 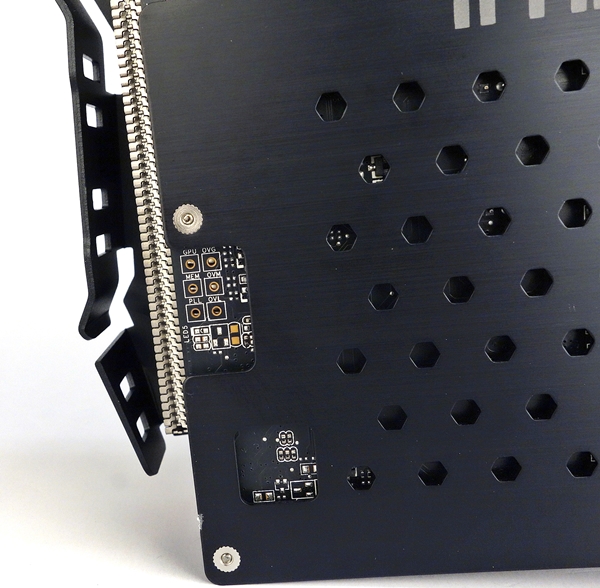 A little lower from the power LEDs, we see six voltage modifications points. When they are properly hotwired, power users will be able to bypass built-in safeguards for overheating and overcurrent protection, so that the card can be overclocked further. 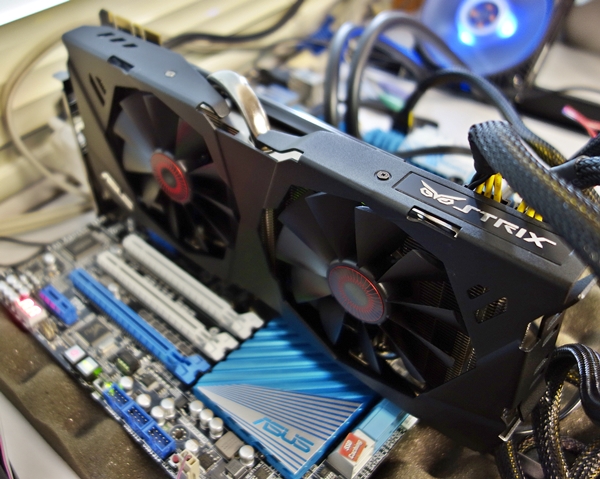 To keep the card running cool, especially under load or when it's overclocked, the DirectCU II cooling system is responsible. By leveraging on the significantly lower TDP of the GM204 GPU, at just 165W, the DirectCU II system comes updated with the 0dB feature where the twin cooling fans will cease operations when the temperature of the card falls below a particular threshold. The ASUS card has a metal fan shroud that is functional, and it doesn't house any fancy LEDs, unlike the other two competing GeForce GTX 980 cards mentioned earlier.

Four heatpipes can be seen snaking out from the bottom of the card. According to ASUS, there's one exclusive 10mm heatpipe and it can be seen at the top of the heatsink. 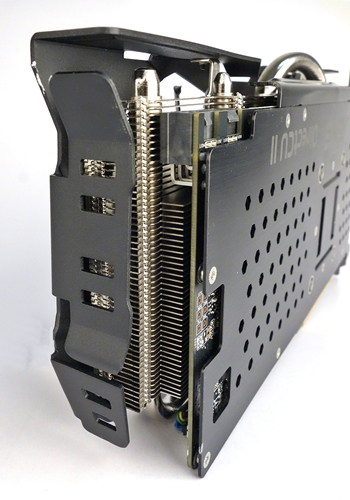 The entire DirectCU II cooling system gives the card an extremely chunky look; however, even with its metal backplate, the card still retains a two-slot profile, but putting two of these cards in an NVIDIA SLI configuration will definitely be a tight squeeze. 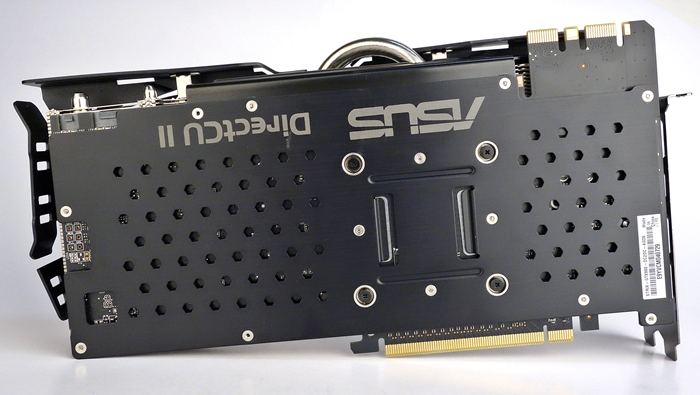 Like all high-end cards, it has a rear backplate for support and passive cooling while being devoid of any fancy embellishments, save for some ventilation cutouts.

In terms of video connectivity options, the card has one dual-linked DVI-I port, one HDMI 2.0 port, and three DisplayPort ports.

The cards used for comparison are a subset of the ones from recent review of the MSI GeForce GTX 980 Gaming 4G. We have excluded the GeForce GTX 780 Ti cards as we already know their performance standings. For the 3DMark 2013 benchmark results, all three GTX 980 cards from the add-in card partners were tested with latest GeForce GTX drivers; version 374.88. In addition, we tested all the third party GTX 980 cards with the 3DMark 2013 Ultra benchmark. And for the MSI and Gigabyte GTX 980 cards, we determined the updated drivers didn't affect their previous 3DMark 2013 results, which were carried out with an older version driver software (version 344.16). Therefore, their past temperature, power consumption and overclocking results will be brought forth for direct comparison with the ASUS Strix GeForce GTX 980 OC Edition card.

The cards involved are listed accordingly:-

This is the list of benchmarks that we'll be using for our benchmarking exercise since the full performance characteristics have been identified in our original GeForce GTX 980 reference card review:- 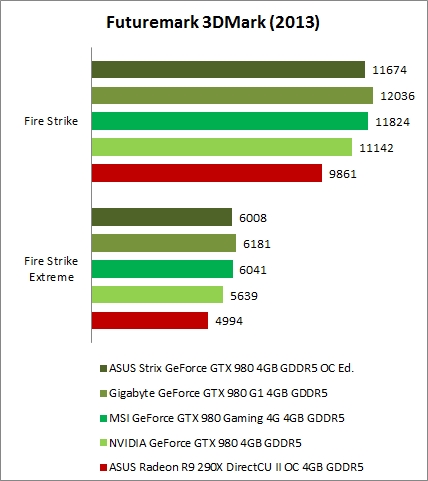 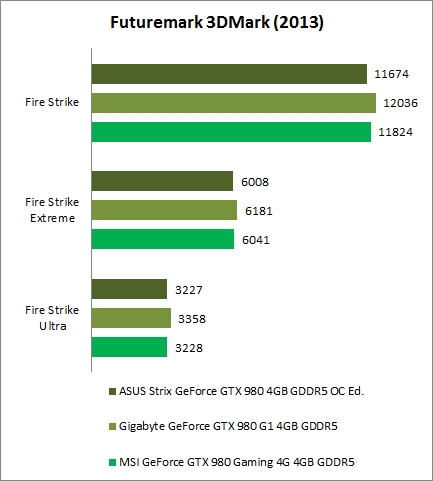 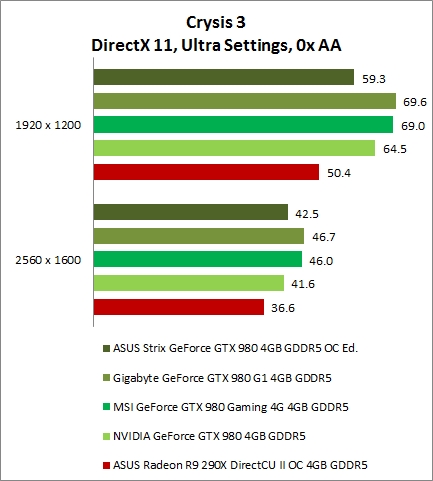 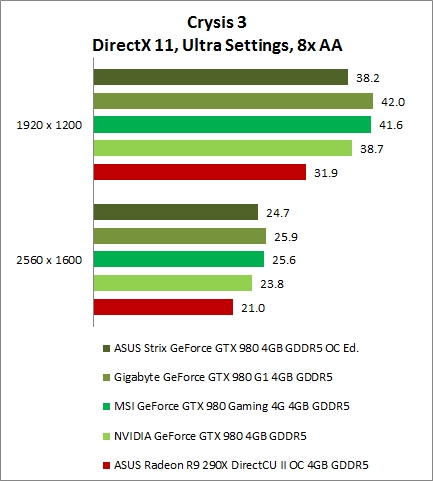 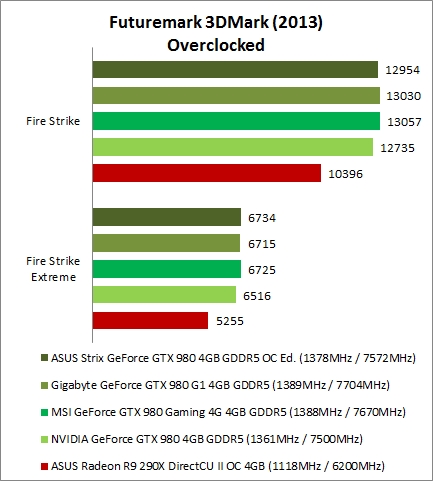 The ASUS GTX 980 card had the highest operating temperature, but its power consumption profile was similar to the MSI card. 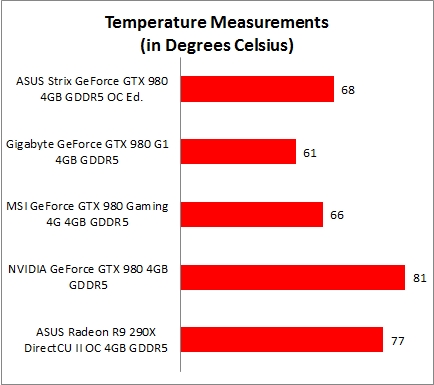 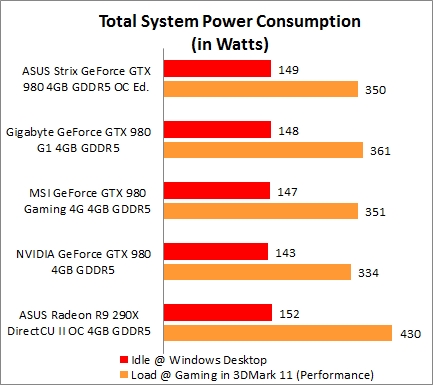 The performance of the ASUS Strix GeForce GTX 980 OC Edition was marginally lagging its competitors due to its lower operating clock speeds. Only in its overclocked state did the card make an impression on us. Its DirectCU II cooling system didn't do any wonders and its power consumption was similar to the MSI card, despite the latter having higher clock speeds. The card does have some interesting features, like its voltage modification points that will allow the tinkerer to bypass voltage and temperature safeguards for extreme overclocking. Also, the card has Molex connector LEDs for visual checks.

The ASUS card is priced at S$969 and the local ASUS spokesperson has said that the card will remain at this launch price for the foreseeable future. In comparison, the Gigabyte GeForce GTX 980 G1 price has risen from S$980 to S$1,035 due to the sharp appreciation of the USD. Also, the MSI GeForce GTX 980 Gaming 4G, with a launch price of S$949, may be due for a price increment due to the same reason as the Gigabyte card. So, as of now, the ASUS card's price point is in between that of the MSI and Gigabyte cards. In our opinion, the ASUS card will appeal to the system builders who like its tank-like appearance as well as those who are patient enough to tinker and coax the best performance out of this card by their overclocking efforts. 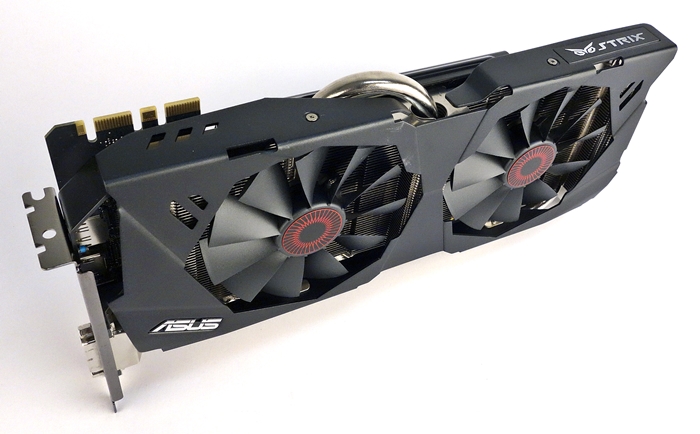 Write a Review
Compare This | Specifications
Sturdy appearance
Attractively priced
Appeals to tinkerers
High power draw despite modest factory overclocks
Our articles may contain affiliate links. If you buy through these links, we may earn a small commission.
Sponsored Links