Enter The Dark Knight - The Wait Is Over

Mention 'ASUS' a decade back, and people would probably associate it with motherboards and graphics cards. And who would have known that the humble ASUS RT-N16 would change that perception when it landed here three years ago? Yes, ASUS has finally come of age in the ranks of 802.11n routers (it was draft-N then). Fast forward to the present, ASUS has since established itself as a serious contender against the likes of Linksys or D-Link with formidable dual-band offerings of their own, like the RT-N56U 'Dark Diamond' which made its debut in late 2010. The Taiwanese's latest and highly anticipated networking maestro, the RT-N66U, supposedly evolved from the conceptual RT-N76U gaming router which never quite made it to retail shelves. Code-named as the 'Dark Knight' in its final materialization, the N66U appears to have all the angles covered as far as home networking needs are concerned. More on that when we discuss its features. We did receive an engineering unit from ASUS in December last year, but we had to postpone our review due to the premature and buggy firmware (the router hung when we tried to hook it up to the Internet). This was also an early build of the N66U which included a built-in fan. 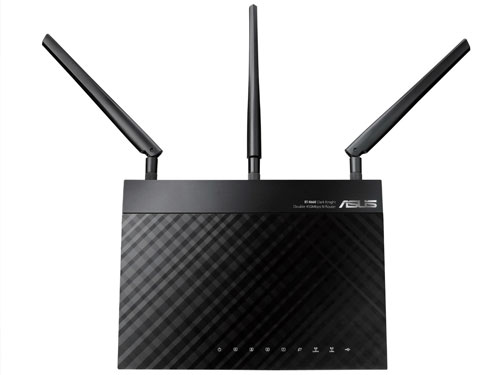 The final version of the  'Dark Knight' will carry a Broadcom BCM4706 processor (clock speed: 600MHz), plus a BCM4331 wireless chipset capable of 3x3 streams. Loyal followers of Broadcom solutions would be glad that ASUS hasn't jumped onto the Marvell ship as yet. At a glance, the N66U appears to be crammed to the brim with networking goodies such as print server and file sharing features as well as multiple SSID support. Plus, ASUS' latest router also supersedes the RT-N56U with theoretical top speeds of 450Mbps on both bands. In addition, we understand ASUS have upgraded their web browser interface (ASUSWRT Dashboard) along with the N66U's release. You may peruse our findings over at the next page if you'd like to find out more. Released in the States earlier this year, we're glad to say that the wait for this Dark Knight is finally over on our local shores. Local networking enthusiasts can get their hands on the N66U at the upcoming IT Show at a launch price of $279. Comparatively, that's just about 20 dollars more than the RT-N56U when it was first launched more than a year ago. For now, let's get on with this review and see if this true dual-band N66U is in fact worth the wait!

Write a Review
Compare This | Specifications
Dark and sexy design
Supports file sharing and multiple SSIDs
Breakneck downlink speeds
IPv6 support
Steep price
Our articles may contain affiliate links. If you buy through these links, we may earn a small commission.
Sponsored Links