To create a wireless network scenario, our routine test setup typically includes a desktop PC, the reviewed router, and a wireless client. The desktop system (with a Gigabit Ethernet port) is designed to simulate a host machine, while the router in question acts as the gateway. And lastly, a notebook plugged with a dual band Wireless-N USB adapter fulfills the role of a wireless remote client.

To gauge the router's peak potential and to prevent any possibility of varying wireless standards used, the evaluated router is locked down at the 802.11n-only mode if its features allow us to do so. The QCheck application provides an indication of the wireless throughput (TCP) and streaming (UDP) finesse between the host and client endpoints. TCP throughputs are measured against a 1MB data packet, whilst any significant packet loss is registered with the UDP test. On the other hand, NetIQ's Chariot benchmark offers a more detailed account with average throughput and response time readings recorded over 30 seconds, based on a High Performance throughput script. Range is determined by the distance between the router and wireless client. Now, let's run through the results proper.

As you can see from our table of results, the ASUS RT-N56U managed to deliver robust downstream throughputs within the 10 meter range. Interestingly, a faster data speed of 89.714Mbps was measured at the 10-meter mark, compared to a cozier range of two meters with a smaller figure of 77.584Mbps. Note that these numbers are crunched on the 2.4GHz band without any encryption. Also, the router offers 13 radio channels, and we've locked on the fifth channel for our tests. Moving on, even at a further throw of 25 meters, the N56U did hold its own with a stable throughput of 36Mbps for both uplink and downlink tests on the Chariot benchmark. Furthermore, it showed further resilience for UDP Streaming, which was a lossless affair with data arriving intact at the end points. That's right, no signal dropouts were encountered across. Most of all, the RT-N56U managed to transfer a 1GB file below two minutes when tested at 2 and 10 meters. This is by far one of the most impressive results we have observed with a ratified N-router. If you think the networking device did well on the 2.4GHz band, well, wait till you check out the router's 5GHz performance. 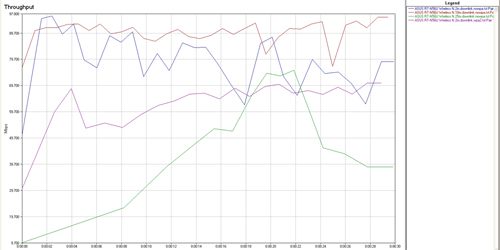