We've seen our share of funky routers over the years. Fortunately, ASUS has married what's trendy and stylish into the RT-N56U which should work in their favor. Slim, modish, feature-packed, and decked with an array of Gigabit ports, the N56U is a clear indication ASUS is serious about seizing a greater slice of market share from dominant names such as D-Link and Linksys. Talking about features, this AP achieves the best of what wireless-N routers have to offer. From data sharing to remote access to makeshift FTP and print servers, this shiny black baby does it all. The web interface is as user friendly as can be, with helpful links provided for selected fields. 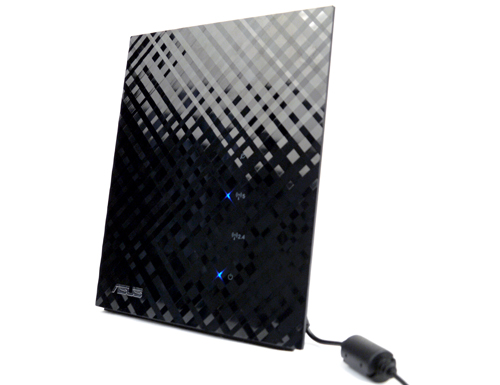 On the performance scale, this AP produced a stable wireless throughput  with a remarkable taste for speed. Judging from the 2.4Ghz band, the router fared better at the 10 meter radius rather than numbers gathered at close proximity. Average TCP throughput was measured at a healthy 89Mbps at 10 meters, compared to 77Mbps at 2 meters. What's significant, however, is the RT-N56U's delivery on the 5GHz band. If media streaming is what you're after, then its commendable data speeds of over 100Mbps on average should tickle your fancy. For those who do not wish to stick with the stock firmware, we have just confirmed with ASUS that the RT-N56U is based on an open platform. In other words, it probably won't take long for third party OS (think DD-WRT) to manifest itself for this model. To sum things up, ASUS has engineered a sexy, and capable simultaneous dual-band networking device with their latest bad boy. Be prepared to fork out more for it though since the N56U does not come cheap. ASUS was unable to confirm the price firmly as of publishing, but a ballpark figure of S$289 was made known.

Update: ASUS has debuted the router locally for S$259. This is the launch price, but it will certainly become more affordable as time passes by.