How do you increase your market share in a crowded networking space? Do something different, some of you might say. Sexy routers are rare as with most drab-looking networking peripherals you see around you. There's the occasional anomaly, of course, such as those from Linksys with their signature UFO-esque form factor, or D-Link's DIR-685 which sports a nifty LCD panel. However, ASUS takes the cake this time for engineering a router with a simple yet elegant styling. You'll have to agree that the "RT-56U" moniker is terribly boring. On the bright side, ASUS' "Dark Diamond" nick does sound more appealing and justifiable towards its fashionable and radical looks. 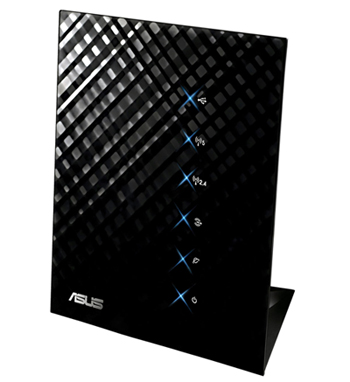 Fancy names aside, this 802.11n router is obviously more than just a pretty face. The N56U boasts of simultaneous dual-band radios, meaning you get to use the 2.4GHz and 5GHz bands concurrently which is ideal for streaming purposes, no doubt. Two USB ports also suggest that sharing of data on storage devices is possible over the network. Apparently, ASUS is also hard selling the router as a P2P maestro with its supposed ability to handle up to 300,000 data sessions. And with the advent of internet on fibre, ASUS is also touting improved wired WAN to LAN throughput speeds of over 900Mbps. There's more, but we'll save them for our latter pages. First up, more dips on its design and features following the jump.

Write a Review
Compare This | Specifications
Attractive Design
Simultaneous Dual Band
Feature-packed
Exemplary Performance On 5GHz
Expensive
Our articles may contain affiliate links. If you buy through these links, we may earn a small commission.
Sponsored Links