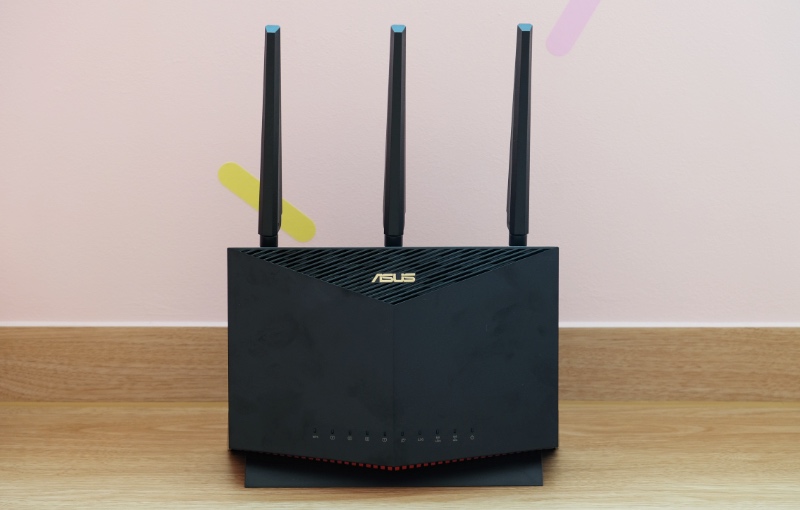 Call me cynical but my BS radar goes into overdrive whenever I’m presented with a gaming router. Unlike gaming notebooks which have discrete graphics that are crucial to running games, gaming routers often have wonderful but difficult to verify features that claim to give you a leg-up on your enemies. Furthermore, it’s not as if you can’t play games with a “regular” router. But that’s how the market is today, there’s a gaming version of everything you can think.

ASUS has been making gaming versions of its normal devices for a long time and it even has an entire division dedicated to doing just that – you might have heard of it, it’s called ROG. However, and quite confusingly, the new RT-AX86U that we have here isn’t a ROG-branded device. Instead, it’s a dual-band AX5700-class Wi-Fi 6 with features designed for gaming and gamers. Yes, much like its ZenBooks, ASUS wants to add confusion to its router lineup too. No matter, we’ll get into the router’s gaming features later. First, let’s talk about the way it looks. 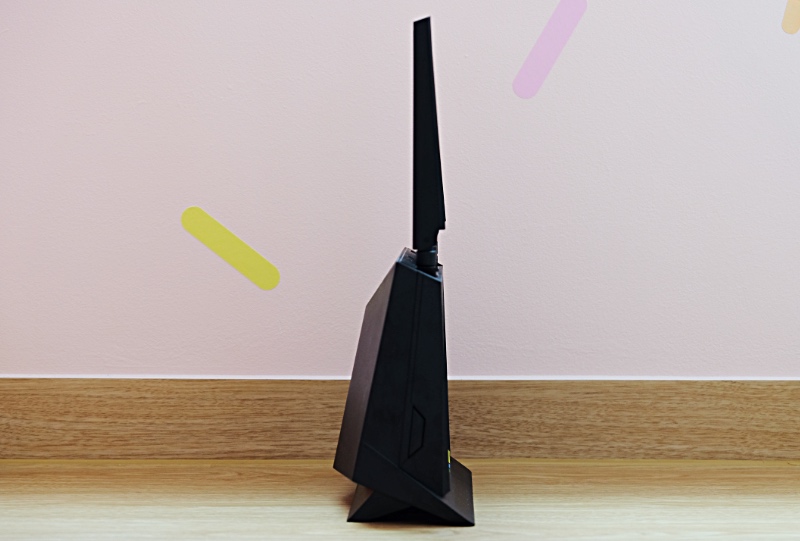 Why don’t more router brands have standing designs? I get it that their height can make them harder to place but surely that’s preferably the amount of space modern routers take up with their insane girth. Furthermore, I don’t think a shelf or cabinet is the right place to be positioning your router especially if you want the best performance and coverage.

As I said, the RT-AX86U has, by today’s standards, a small footprint. The only problem is that it’s quite tall – blame the three sizeable external antennas. I measure it at just a smidge under 32cm but this shouldn’t be an issue if you are setting it somewhere in the open – which you should, by the way, if you want the best possible performance. 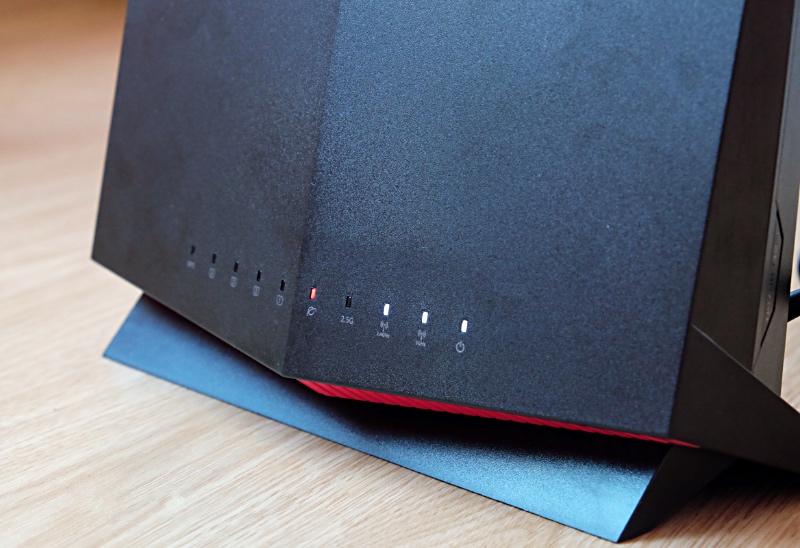 On the front is a row of LED status indicators for both Wi-Fi networks and all the individual Ethernet ports. Their incessant blinking can be annoying especially if you place them in the bedroom but they are absolutely invaluable for troubleshooting your connection. Furthermore, there’s a button by the side of the router that turns them off immediately should you find them too bothersome. 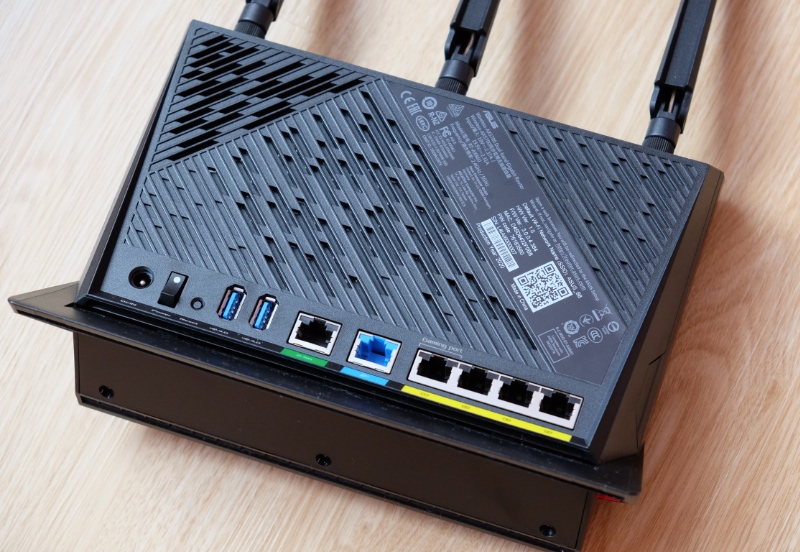 Behind the router, you’ll find two USB-A ports that support USB 3.2 Gen 1 (up to 5Gbps) and a varied selection of Ethernet ports. There are your usual single Gigabit Ethernet WAN port and four Gigabit Ethernet LAN ports. One of the LAN port is designated as the Gaming port and it gets priority over the rest. Finally, there’s an additional Ethernet WAN port that supports high-speed fibre of up to 2.5Gbps. You'll need an ONT that supports this too to make full use of it.

The RT-AX86U is a dual-band AX5700-class router. It supports Wi-Fi 6 and speeds of up to 861Mbps on its 2.4GHz network and 4,840Mbps on its 5GHz network. This sounds very exciting – 4Gbps over the air! – but bear in mind that most client devices still can’t take full advantage of these speeds yet. The Intel AX201 wireless card that’s found in many new notebooks “only” support speeds of up to 2,400Mbps.

One feature of this router that bears mentioning is support for DFS (dynamic frequency selection). When enabled in the router’s management system, it gives the RT-AX86U the ability to tap into wireless channels that are typically reserved for use by government services. Since these channels are less congested, users can get better Wi-Fi performance by using them. I covered DFS in greater detail in an older article here.

Another key feature is AiMesh which allows the RT-AX86U to form mesh networks with other compatible ASUS routers. This can be handy especially if the router you are replacing also supports AiMesh as it lets you create a mesh network without having to buy a new mesh networking system. I covered this in greater detail here. 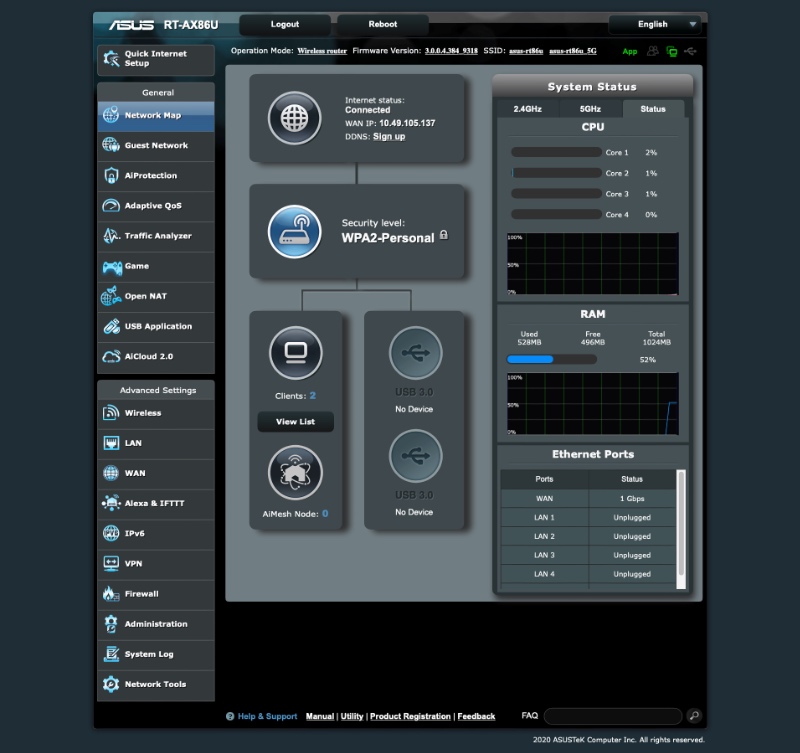 The router management system is classic ASUS. The interface looks daunting at first with its myriad of tabs and options, but it is quite easy to use once you start exploring it. There are the usual tabs for wireless settings including the setting up of guest networks, parental controls, real-time traffic analyser, QoS, LAN settings, firewall, and more. 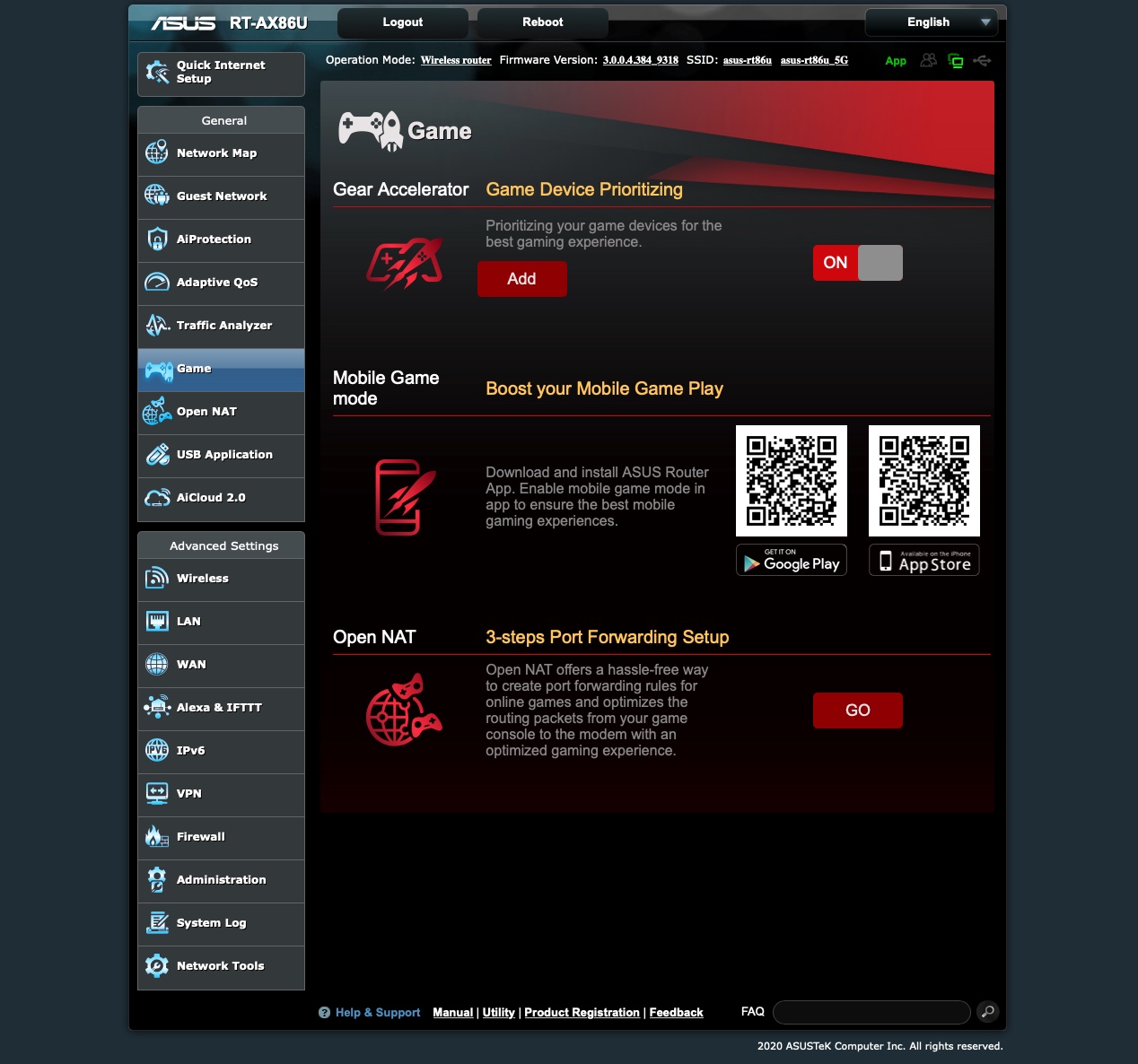 But there’s also a Game tab. Click on it and you’ll be greeted by three options: Gear Accelerator, Mobile Game mode, and Open NAT. Gear Accelerator is really a form of device-based QoS. It lets you prioritise connections based on devices so that your most important devices get the best performance.

Mobile Game mode can only be activated on your mobile device using the ASUS Router app. It optimises the connection on your mobile device for gaming by placing it as the highest priority device in your QoS settings. In short, it’s a one-button Gear Accelerator for mobile devices. I tried this feature but I can’t really tell a difference maybe it’s because my household is just me, my wife, and my little one, and we aren’t exactly fighting over bandwidth. This feature might prove more useful in a more mature family unit where there are more people streaming videos and games simultaneously. 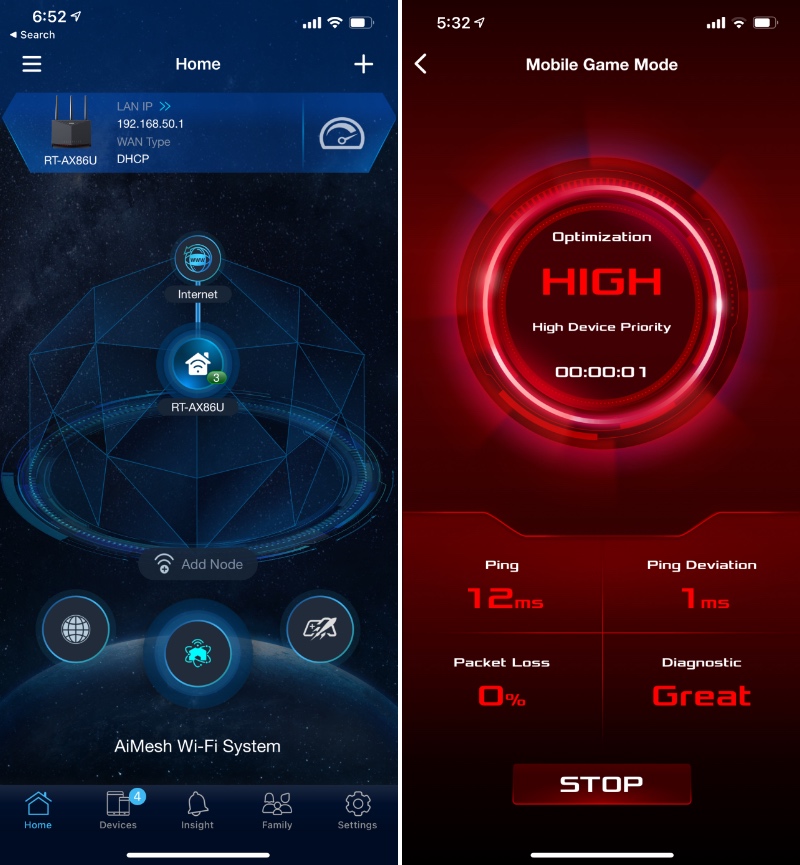 The last option in the Game tab is Open NAT which contains pre-configured port forwarding settings for specific games to help you get an Open NAT for the best possible connection to the game servers. Some titles supported by this feature include Dota 2, CS: GO, Fornite, Minecraft, League of Legends, PUBG, and more.

These features are pretty useful but the RT-AX86U can’t match features of a full-fledge ROG gaming router, like the ROG GT-AC2900. For example, the latter shows latency information like ping deviation – which is arguably more important than outright throughput – as well as the ping status of servers of popular games like Dota 2, League of Legends, and more.

Nevertheless, the RT-AX86U has a wealth of useful and powerful features that will more than suffice for most users. Gamers demanding the very best, however, should still look for a ROG-branded router.