Our routine test setup includes a desktop PC, the reviewed router, and a laptop to simulate a wireless home network. The desktop system takes on the role of a host machine, while the router acts as a gateway. And lastly, an external 802.11ac adapter attached to the notebook is used to fulfill the role of a wireless remote client. We'll be using Netgear's A6200 802.11ac USB adapter for our throughput tests to reduce the number of variables involved.

Here is a graphical representation of our network test setup.

The router is locked down in N-only mode for the 2.4GHz band, and 802.11ac for the 5GHz band, mainly to prevent the use of varying 802.11 standards. Typically, a channel bandwidth of 40MHz is selected where applicable, while 80MHz is used for the 5GHz AC band. The QCheck application measures wireless throughput (TCP) and streaming (UDP) speeds between the host and client endpoints based on a 1MB data packet. On the other hand, NetIQ's Chariot benchmark offers a more detailed account with average throughput and response time readings recorded over 30 seconds, based on a High Performance throughput script.

Looking at the results below, there is both good and bad news. The good news is that the RT-AC68U is generally quicker than its predecessor, especially on the 2.4GHz band. The bad news, however, is that despite the improvement, the RT-AC68U continues to trail behind its competitors on the 2.4GHz band. While it is appreciably faster than its predecessor, it still loses out to older routers like the Linksys EA6500, D-Link DIR-865L and Netgear R6300. That said, you would really not be maximizing the full potential of this high-end router if you were not on its 5GHz band.

Middling 2.4GHz band performance aside, we felt that it sufficiently redeemed itself with its performance on the 5GHz band. Uplink and downlink throughput speeds are among the highest we have seen and in our file transfer test, it managed to complete it for the first time under the 30 seconds mark. Not only was it fast, it was able to maintain its performance over range too. On top of that, its performance in our UDP streaming benchmark also showed that it was able to maintain a stable connection, crucial for intensive workloads like HD video streaming and gaming.

The graphs and charts for this performance overview is listed below.

ASUS has made significant leaps and strides in their router business in the past couple of years, rising from a newcomer to an industry veteran in just a short span of time. Past hits like the RT-N56U and the recent RT-AC66U have cemented ASUS as a serious player in the high-end consumer router space. The RT-AC66U is a hard act to follow up on, but we think ASUS has managed reasonably well.

However, we cannot help but feel that ASUS missed out on a chance to rectify some of the problems that plagued the RT-AC66U, the most pressing being its middling 2.4GHz band performance, which was its Achilles heel. Looking at our performance charts, the RT-AC68U did offer improved performance on the 2.4GHz band, but it was still some ways off its rivals.

As for design, the RT-AC68U can only be positioned upright, unlike its predecessors. Furthermore, it cannot be mounted to walls. Along with its massive antennae, this can make the router a bit difficult to position around the house and also makes it very conspicuous. Fortunately, it is quite a futuristic and good-looking router.

These gripes aside, the RT-AC68U has a number of pros going for it. For one and most crucially, its performance in AC mode on the 5GHz band is nothing short of blistering. If you thought that the older RT-AC66U was fast, this new router improves upon that appreciably. Of course, you would need a compatible device to be able to take advantage of this speed. On top of that, it was easy to setup and the ASUSWRT utility does offer lots of options, customizability and also ASUS AiCloud for setting up a personal cloud drive effortlessly. 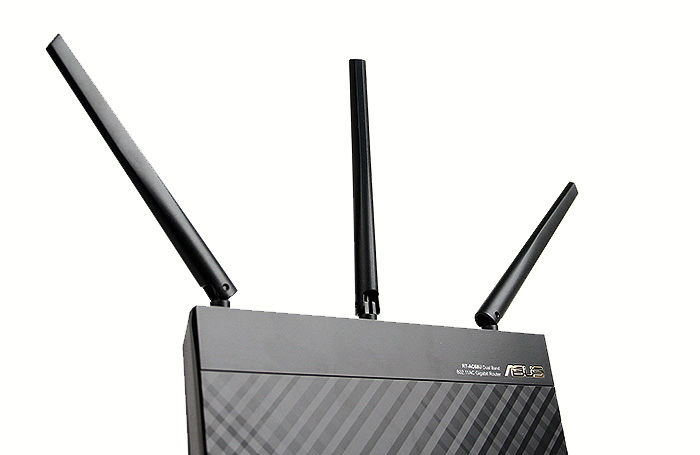 ASUS products have typically commanded a premium and the RT-AC68U is, unfortunately, no different. Its list price of S$359 makes it one of the priciest routers in the market right now. But for the price, you do get a smart-looking router with blazing AC performance and rich features.

Write a Review
Compare This | Specifications
Blazing fast 5GHz band performance
Attractive design
Comprehensive networking features
Can only be positioned upright
Average 2.4GHz band performance
Pricey
Our articles may contain affiliate links. If you buy through these links, we may earn a small commission.
Sponsored Links