Taiwanese hardware giant ASUS has made significant progress in recent years expanding its product portfolios and improving upon the quality of its products. Today, not only does ASUS continue to maintain a dominance over the components industry (motherboards and graphics cards), it is also a key player in the notebook, smartphone and tablet markets too.

However, it is only the past three or so years that ASUS has really come into its own in the networking market too. Back in 2010, ASUS released the formidable RT-N56U which won our coveted Editor’s Choice award thanks to its outstanding performance and attractive design. They then followed up with the equally stunning RT-N66U and most recently, the RT-AC66U. Thanks to this string of hits, ASUS is now recognized by many enthusiasts as amongst the top brands for routers. 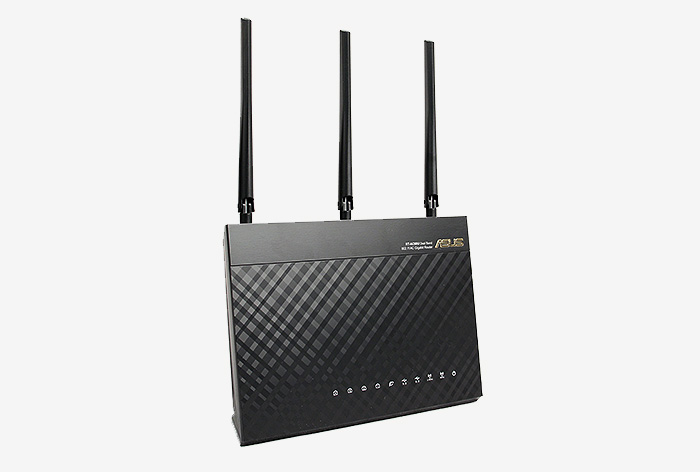 ASUS recently released their latest and fastest router yet, the RT-AC68U. This is a dual-band router capable of a combined dual-band data rate of 1900 Mbps. Let’s see if it can build on ASUS’ string of recent successes. 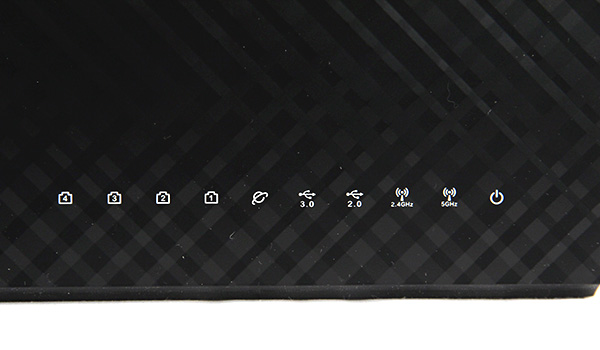 The new RT-AC68U shares many design elements from ASUS’ previous flagship routers. The checkered pattern on the front panel is perhaps the most distinctive and recognizable. Like its predecessors, the RT-AC68U also features massive external antennae, which, presumably, improves its range and performance. 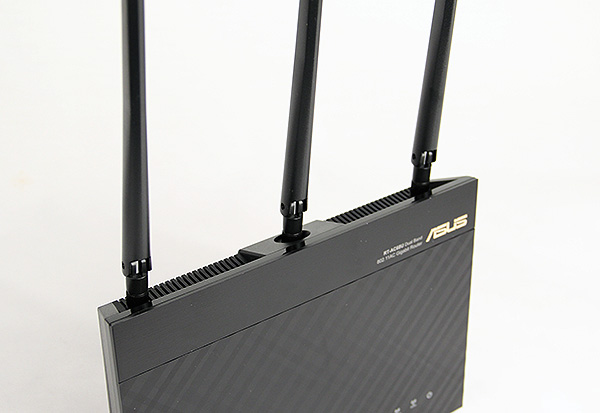 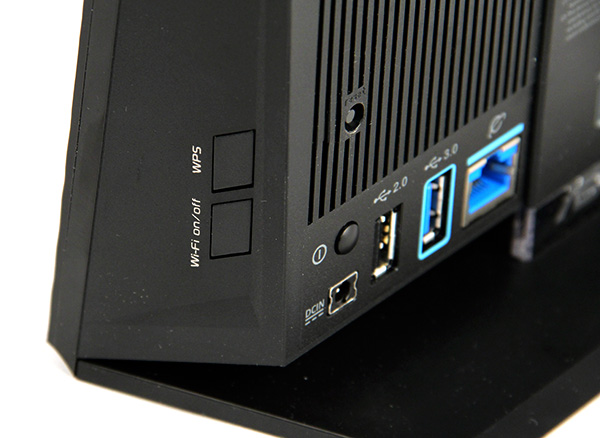 One thing to note is that, unlike its predecessors, the RT-AC68U can only be positioned upright and cannot be laid flat. And because of its massive antennae, users would need to ensure that the router has enough headroom.

On the bottom right corner of the front panel is a string of LED indicators, which is useful for determining if the router is working properly. Should you find the incessantly blinking and flickering too distracting, there is a button behind the router to turn these indicators off.

Behind the router is also where you will found the two USB ports (one USB 3.0 and the other USB 2.0) which can be used for wireless printing or backups, and also the single WAN port and four LAN ports. The WPS button is located on the right side of the router. And below it is a button to instantly turn off Wi-Fi. 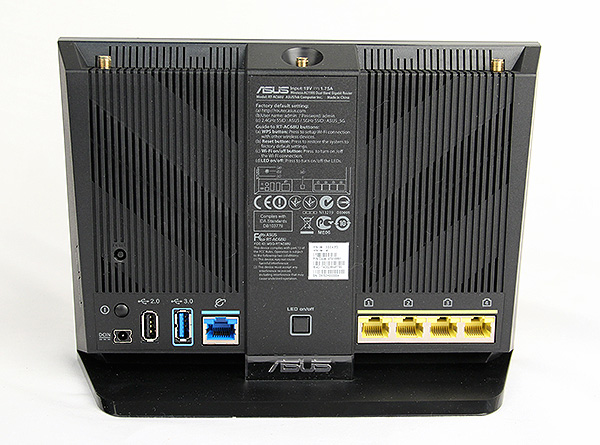 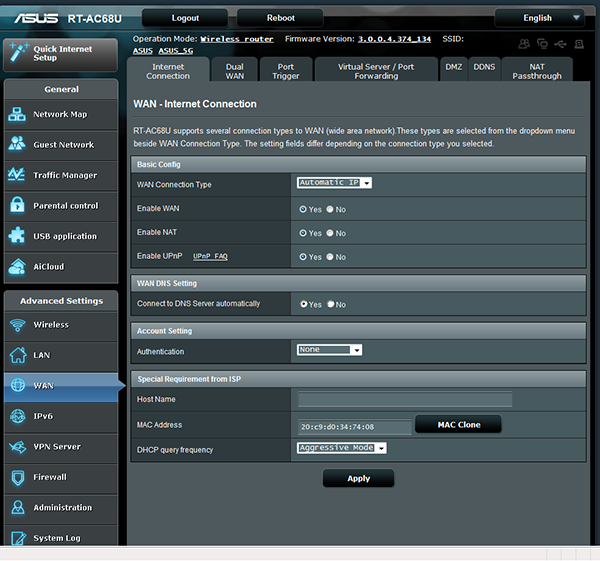 The RT-AC68U uses ASUS’ familiar ASUSWRT user interface that has been consistently upgraded and improved over the past couple of years. It is straightforward, easy to use and also very quick, thanks to the router's dual-core processor. It took us only a couple of minutes to connect to the Internet and setup the wireless networks.

Crucially, it is also easy to upgrade the firmware, which is important for receiving new updates. For instance, the latest firmware update (Version 3.0.0.4.374.291) to the RT-AC68U enables the router to read and write to HFS+ drive formats, thus allowing it to be used as a wireless "Time Machine" with Mac systems. It also enhances performance with drives that are formatted in FAT32. 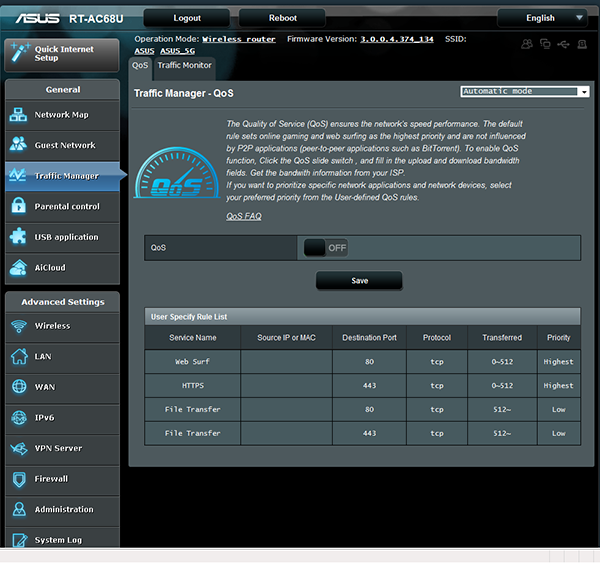 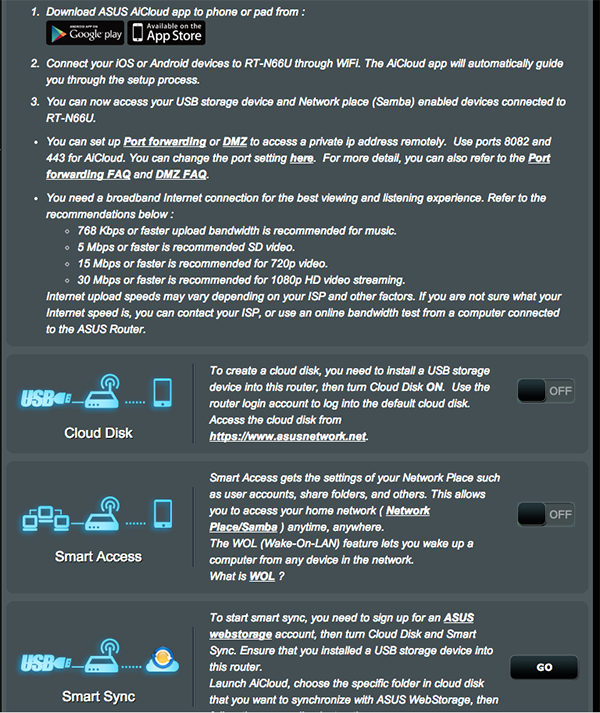 That aside, the ASUSWRT user interface also dishes up options such as QoS (Quality of Service), the ability to create and maintain multiple wireless SSIDs, and a rich variety of security options. Add to this is also ASUS' AiCloud functionality, which lets you create a personal cloud by attaching any external USB storage device to the router. Once setup, you can access your content on the drive using your Android or iOS device.

Write a Review
Compare This | Specifications
Blazing fast 5GHz band performance
Attractive design
Comprehensive networking features
Can only be positioned upright
Average 2.4GHz band performance
Pricey
Our articles may contain affiliate links. If you buy through these links, we may earn a small commission.
Sponsored Links