Once a dark horse in the networking trade, ASUS has pushed themselves to the forefront with a series of astute efforts, starting with the RT-N16U which marked a nice turning point for the Taiwanese firm two years ago. That said, ASUS' latest super weapon comes in the form of the RT-AC66U, a successor to the RT-N66U (codenamed "Dark Knight") launched earlier this year. The new dual-band router's fearsome weaponry includes 802.11ac support, which translates into top speeds of 1.3Gbps on the 5GHz spectrum, and 450Mbps on the 2.4GHz band. Trends do indicate that many network hardware makers are undoubtedly taking to the "clouds" in recent times, such as D-Link and Linksys for instance. Now, the RT-AC66U also happens to be the launchpad for AiCloud - a "personal cloud server" service from ASUS which enables users to access data on connected devices via external networks and mobile gizmos. AiCloud is said to be compatible with most operating systems, including Windows, OS X, and Linux. 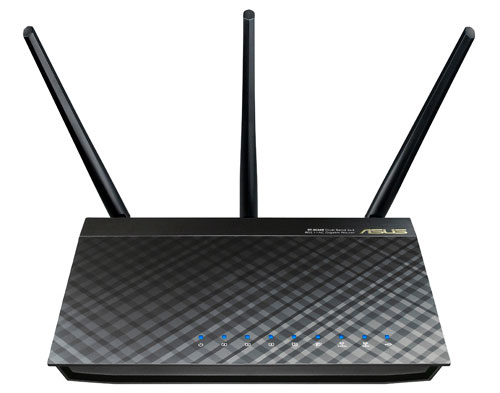 According to ASUS' marketing collateral, other perks of the stylish RT-AC66U include a 30-second setup, six guest SSIDs (three on 5GHz, and another three on 2.4GHz), and fancy cooling solution like the "high-density aluminum fins" built into the unit. Enthusiasts might want to know that the router is powered by a similar main chipset used by the RT-N66U, or more specifically, the Broadcom BCM4706 with a clock speed of 600MHz. On the wireless side of things, the device carries the Broadcom BCM4360 and BCM4331. As for retail matters, the RT-AC66U will make its official appearance during COMEX 2012. If you're planning to grab one, note that the router will be sold at its standard retail price of S$339 during the show without any discounts. Looking back, the slightly older RT-N66U did produce decent throughputs on both bands, although it somehow failed to outshine the RT-N56U by comparison. On the note, we're hoping the RT-AC66U will be capable of breaking the speed barriers established by the 802.11n dual-band routers, and hopefully leave the RT-N56U and RT-N66U behind in its wake.