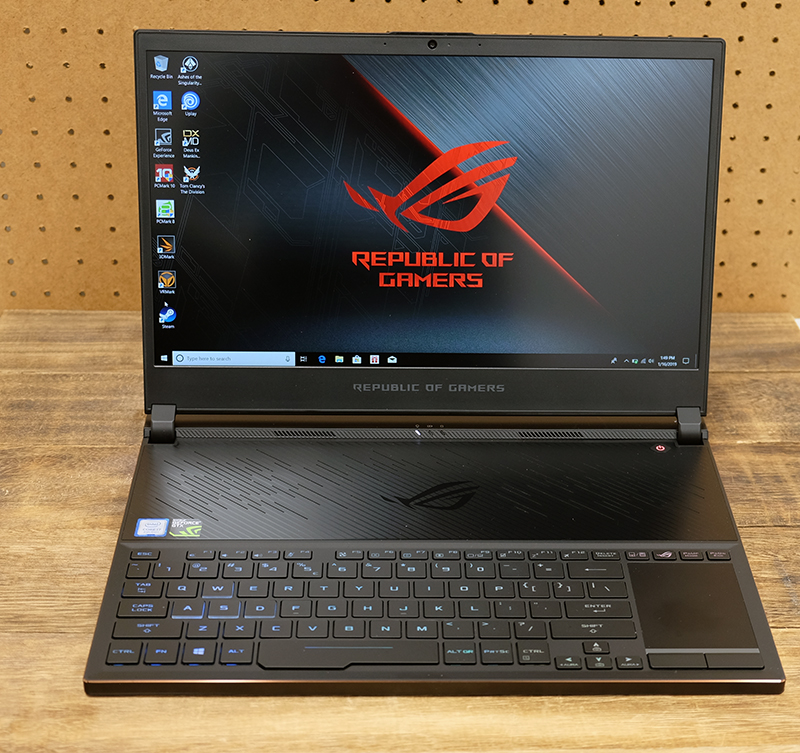 The Zephyrus S GX531 is a gaming laptop that’s looking to push the envelope in terms of mobility. At a mere 15.75mm at its thickest point, this may be the thinnest gaming laptop I’ve reviewed so far. This is one of those laptops that just exude luxury, and its aluminum and magnesium alloy chassis feels really good in hand. There’s barely any discernible flex anywhere, and this feels every inch like the premium notebook it is.

The finish on the notebook is impeccable, and the lid is bifurcated by a diagonal line that allows for the brushed metal finish on one side and a matte coating on the other. This contrasting look is pretty striking, and it gives the notebook more character. 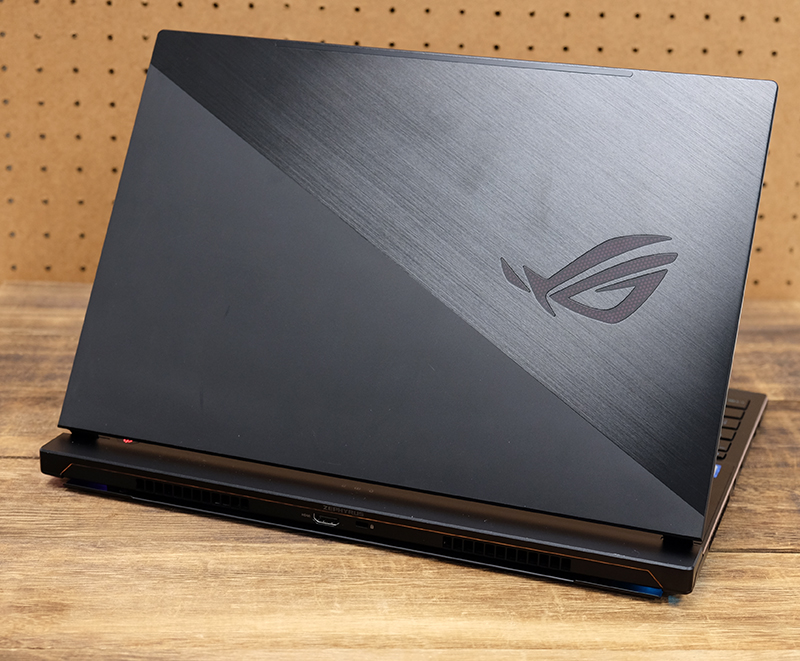 That said, it’s not the lightest at 2.1kg, but it’s still sprightly enough to slip into your backpack and take around with you. It’s also pretty competitive with what other brands have to offer.

ASUS was able to make the laptop so thin because of its innovative cooling design, like the one we saw on the first Zephyrus. The keyboard has been pushed to the edge of the notebook, making room for a huge intake vent at the top of the laptop and the rest of the cooling system. The company calls this its Active Aerodynamic System (AAS), and it comprises 12V cooling fans, five heatpipes, and no fewer than four heatsinks. The fans are built from liquid crystal polymer, so ASUS has been able to make them even thinner, while still boosting air flow with a high number of blades – 83 actually – on each fan.

When the lid is raised, the laptop base opens by 5mm to create an additional intake vent for air to enter the laptop. The vent is also lit by a tantalizing underglow which is pretty cool to look at. 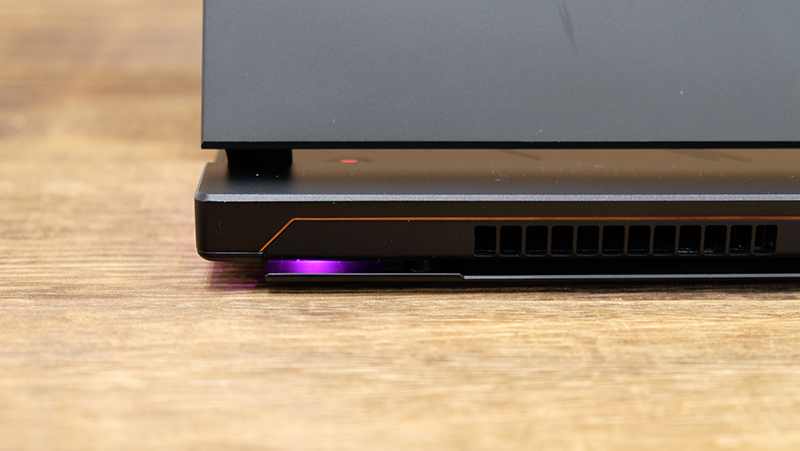 Furthermore, the cooling system has been improved over the first Zephyrus, featuring more heatsinks than before and an extra vent on the right for more efficient heat dissipation. In addition, the anti-dust tunnels from ASUS’ TUF Gaming FX504 also make an appearance here to prevent dust build-up and degradations in cooling performance. These work by leveraging centrifugal force to drive dust out of the dust tunnels, so the heatsinks remain cleaner over time.

The fans follow their own algorithm and adjust their speeds accordingly, but you can also configure the fan speeds manually in ASUS’ Armoury Crate utility. Alternatively, hitting Fn + F5 lets you toggle between Turbo, Balanced, and Silent modes. Unfortunately, the Zephyrus S can get really noisy under load, and the fans can ramp up to a high-pitched drone that is pretty annoying. You’ll probably want to play around in the settings to see how you can mitigate this, but it’s safe to say that you’ll want to game with your headphones on.

The good news is that the unconventional keyboard placement didn’t seem to affect my typing experience much. The keyboard isn’t the most tactile, but key travel distance is still comfortable and I didn’t really have many complaints when typing. ASUS also made the spacebar extra tall, presumably to make it easier to access during crucial moments in-game. 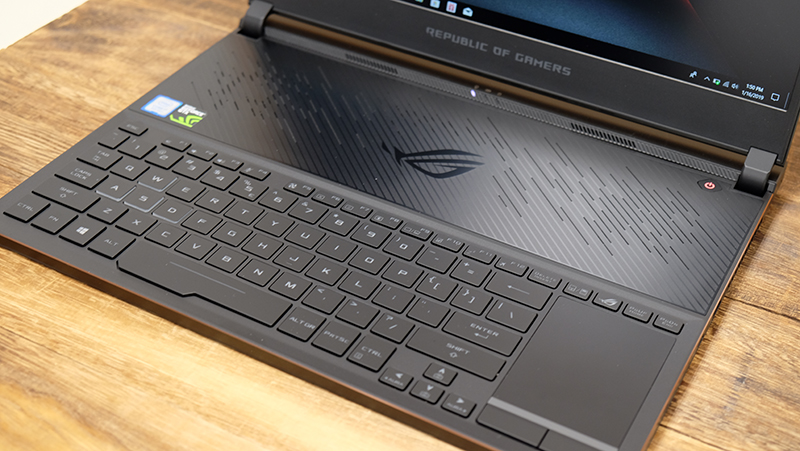 One of my favorite features from the Zephyrus GX501 also makes an appearance here. The touchpad doubles as a number pad, so you technically have access to a full-sized keyboard with as few compromises as possible. The only thing that’s missing is per-key RGB customizations as you’re limited to just four independent zones. 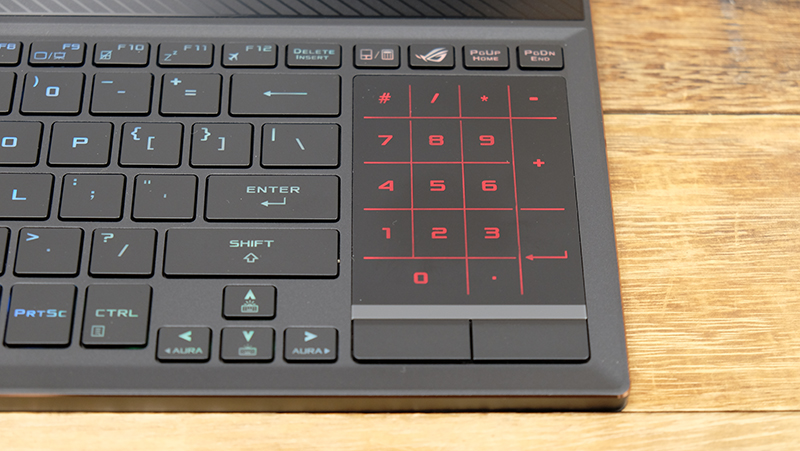 The non-traditional layout probably raises more than a few eyebrows, but it’s actually not that hard to get used to in practice. Furthermore, ASUS practically eliminated the possibility of having warm palm rests here, so you don’t have to worry about that. The keyboard also feels cooler since it’s located away from the main heat-generating components. I quite like the positioning of the touchpad as well, and it feels surprisingly natural and intuitive to use. It helps that this is also a Windows Precision Touchpad, so your gestures feel super precise and accurate. Yes, it's a little narrow, but I find that it works well enough for basic navigation without having to rely on an external mouse.

When it comes to the design though, there are a couple of changes coming from the original Zephyrus. The hinges look larger and more robust, and the new design now creates more room at the back of the chassis for the cooling system, which is how ASUS managed to make the laptop so slim.

The bezels have also slimmed down significantly on three sides, a particularly welcome change that helps give the laptop a far more modern look. In addition, the large vent above the keyboard has taken on a more stylish look, featuring diagonal slits instead of the rather boring perforations that characterized it before. 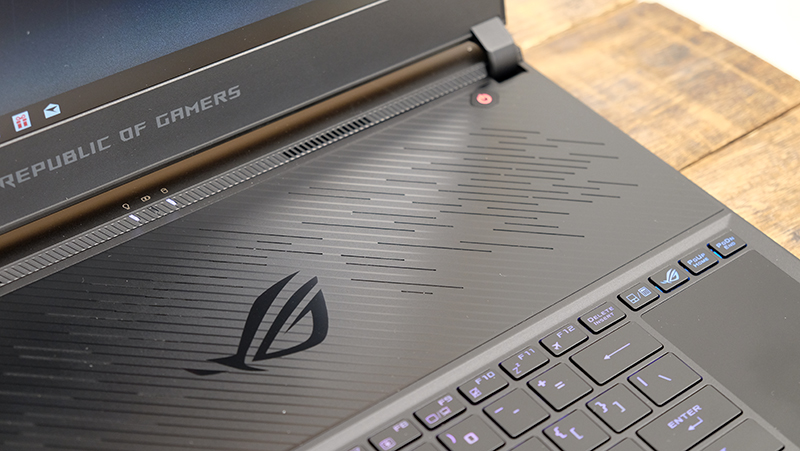 The 15.6-inch IPS-type display could use a little boost in brightness, but colors otherwise appeared accurate. Contrast levels were pleasing to the eye as well, and I was overall pretty happy with the panel. The screen also features a 144Hz refresh rate, so games should appear super smooth and fluid. There’s no G-Sync support, but that’s no big loss with a high refresh rate panel like this one.

On the audio front, the speakers are actually pretty decent, especially considering how thin the laptop is. It’s a little anemic on the low end, but the sound was otherwise pretty clear and loud. 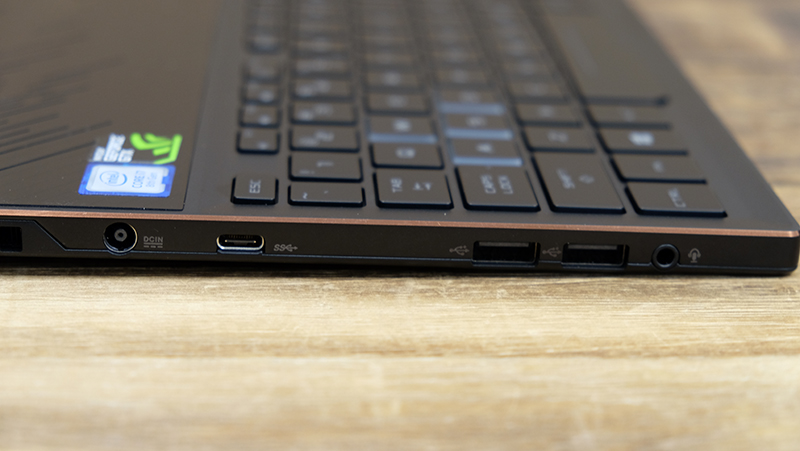 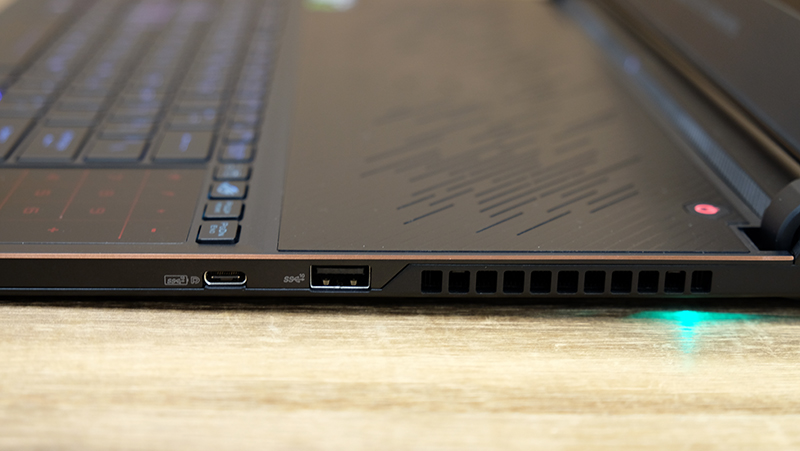