The ROG Zephyrus S GX531GW did surprisingly well in PCMark 10, topping the charts in terms of overall scores. What's impressive is that it even managed to edge out the Gigabyte Aero 15Y, which comes with a more powerful Intel Core i9-8950HK processor and a GeForce RTX 2080 Max-Q.

On the storage front, the new Zephyrus S managed to keep pace with the other laptops in terms of overall scores, but it fell behind when it came to storage bandwidth. As I mentioned earlier, the Zephyrus S now uses QLC NAND for its SSD, which can suffer in certain performance aspects, and that looks like its showing here. That said, this isn't necessarily something that you'll notice during daily use, although QLC NAND still does have lower endurance. 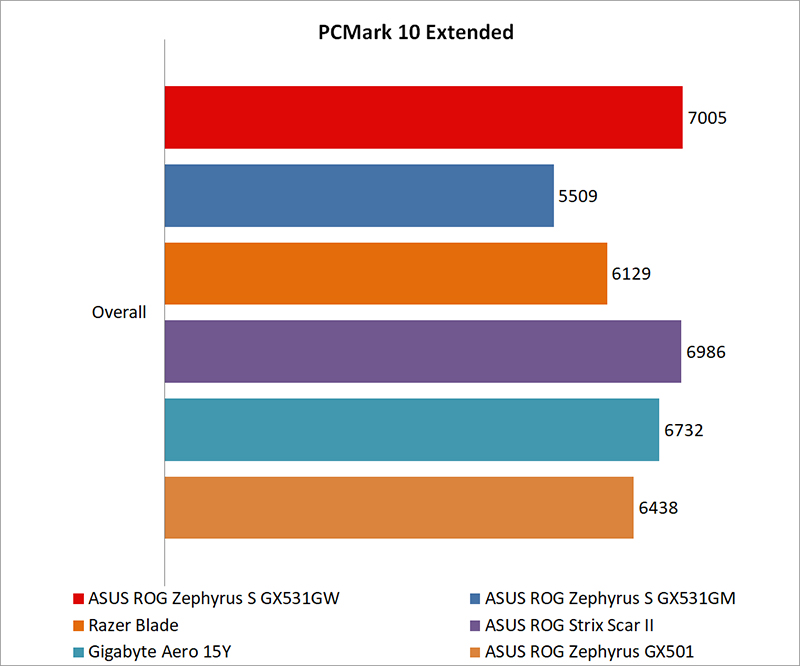 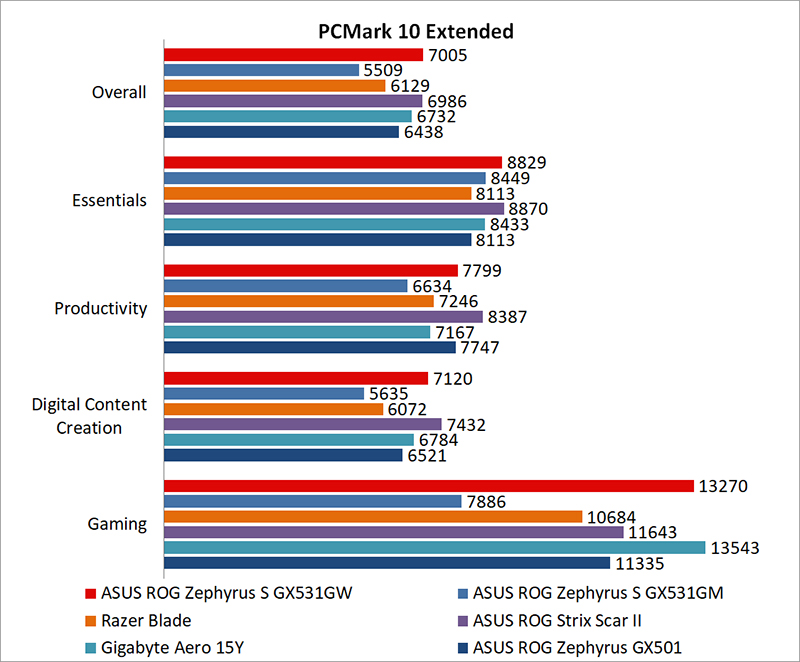 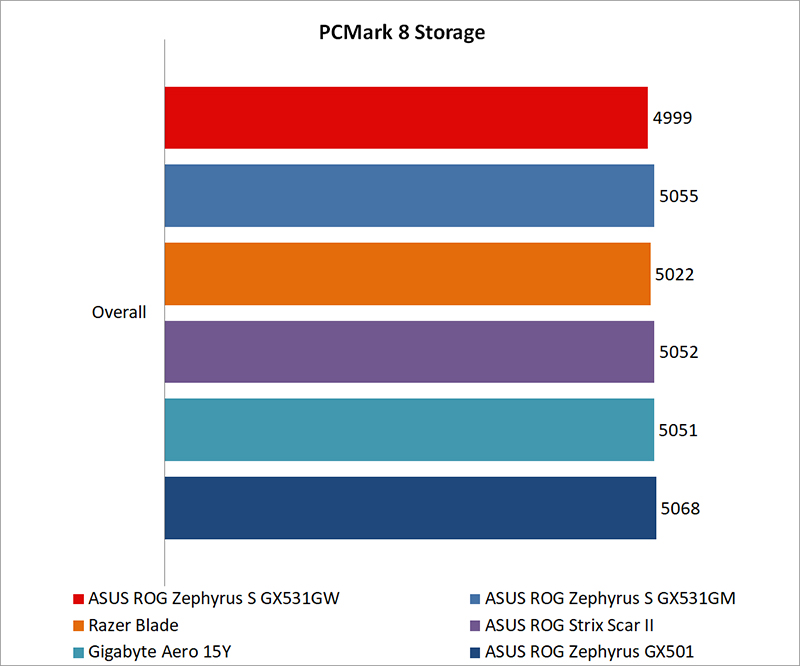 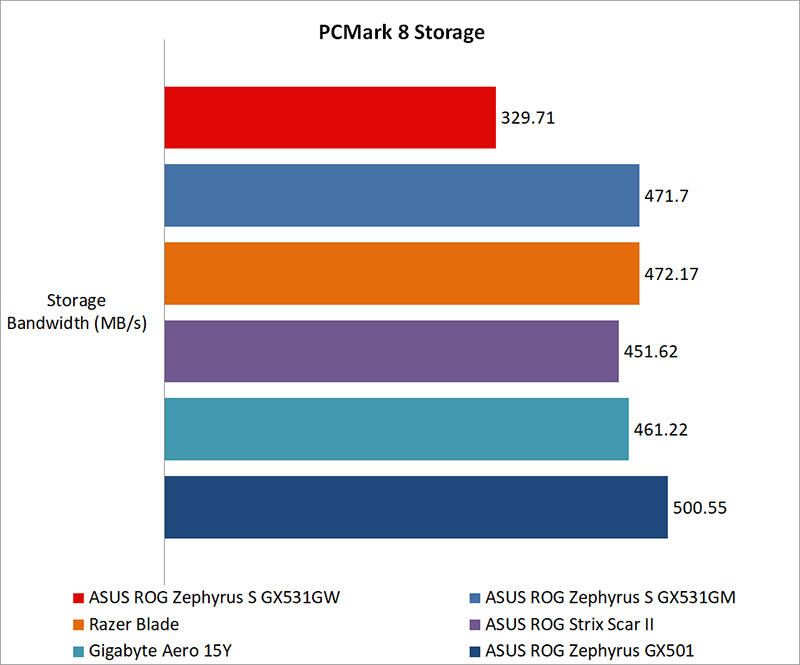 The ROG Zephyrus S GX531GW does really well in our gaming benchmarks as well, coming in only slightly behind the GeForce RTX 2080 Max-Q in the Gigabyte Aero 15Y in 3DMark . Having said that, things like thermal design play a big role in how well mobile GPUs perform, and there have been reports that other GeForce RTX 2080 Max-Q are actually faster than what the Aero 15Y was able to muster. In other words, the results here may be less about the strengths of the Zephyrus S than the flaws of the Aero 15Y.

The new Zephyrus S was even quicker than the Aero 15Y in Deus Ex: Mankind Divided and Tom Clancy's The Division, which makes it seem even more likely that the GPU on the Aero 15Y is suffering from some serious thermal throttling. Either way, the Zephyrus S has acquitted itself really well, and it is even faster than the ASUS ROG Zephyrus GX501 and its GeForce GTX 1080 Max-Q, coming ahead by roughly 12 per cent in Mankind Divided. Compared to the GeForce GTX 1070 Max-Q from the previous generation, it is nearly 30 per cent faster. 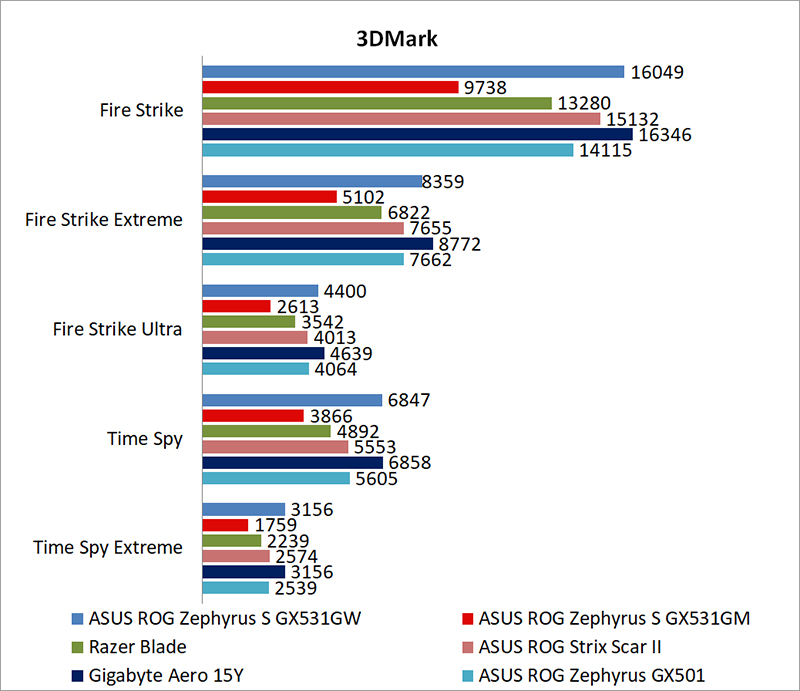 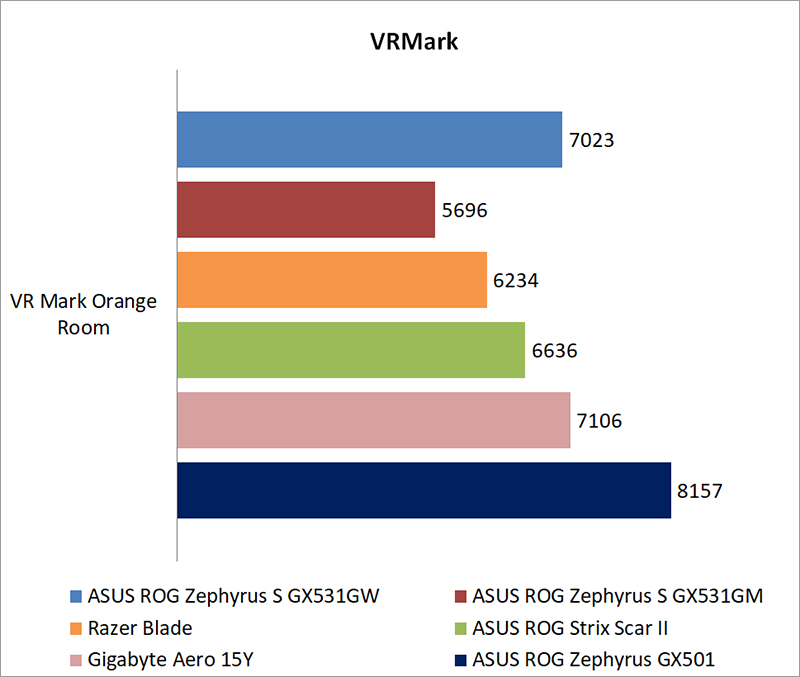 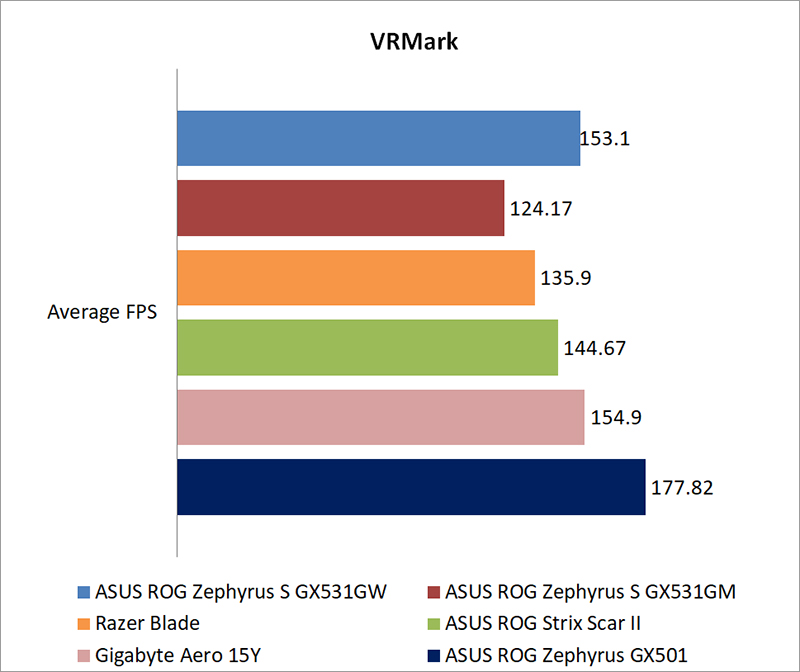 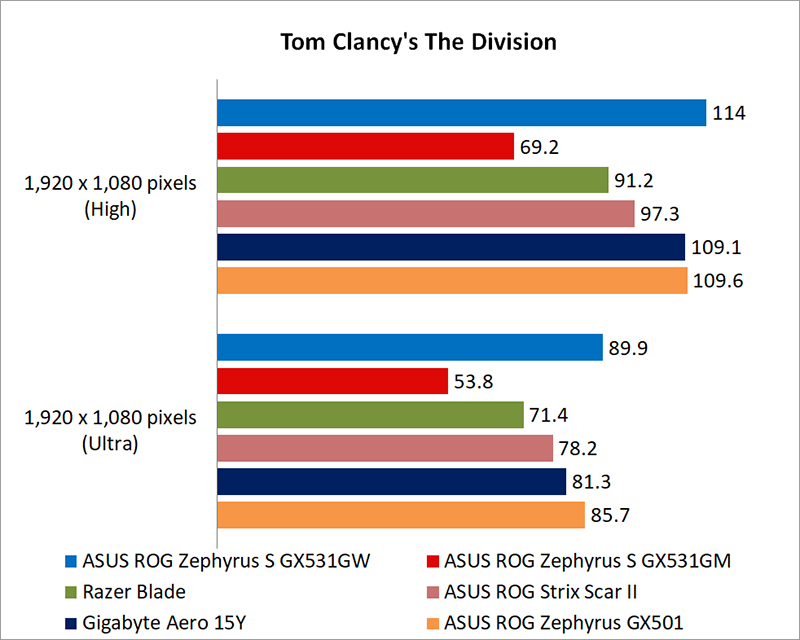 How is its battery life?

ASUS has managed to significantly improve battery life in this generation of the Zephyrus S, effectively doubling it even though battery capacity has gone up by just 18 per cent. That's reflected in the vastly improved power consumption figures, and ASUS says that's thanks to improvements made on Windows 10's end as well.

This means that the new Zephyrus S is also a lot more portable than before. Our portability index is intended to be an objective measure of how portable a notebook is, taking into account factors like size, weight, and battery life, so the Zephyrus S was able to greatly improve its score in this department.

I've found battery life to be a key weakness on previous notebooks with the Zephyrus name, but I'm happy to report that things seem much improved with this iteration of the notebook. 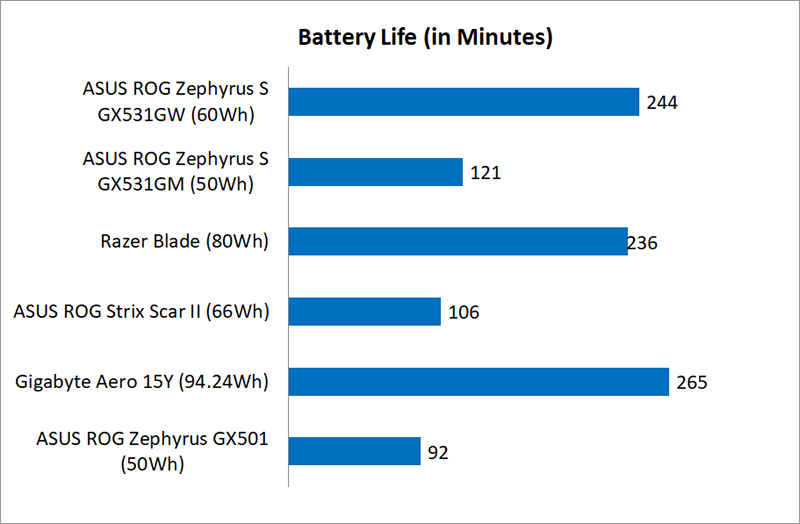 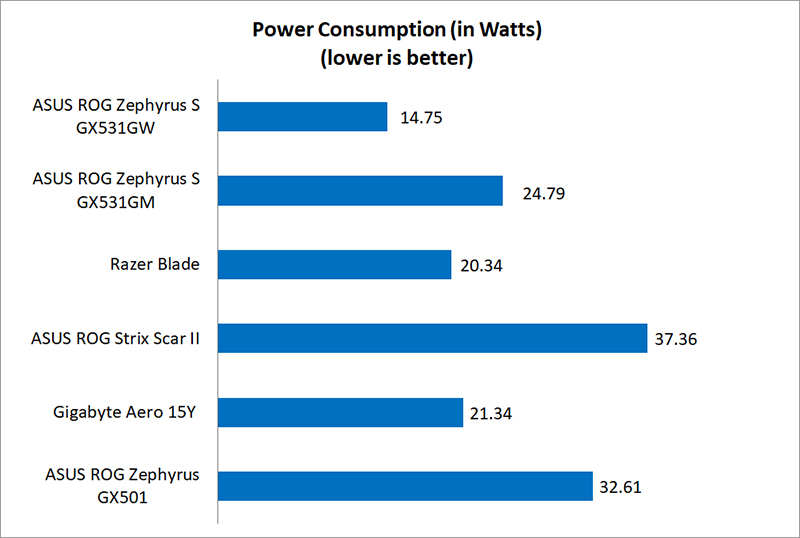 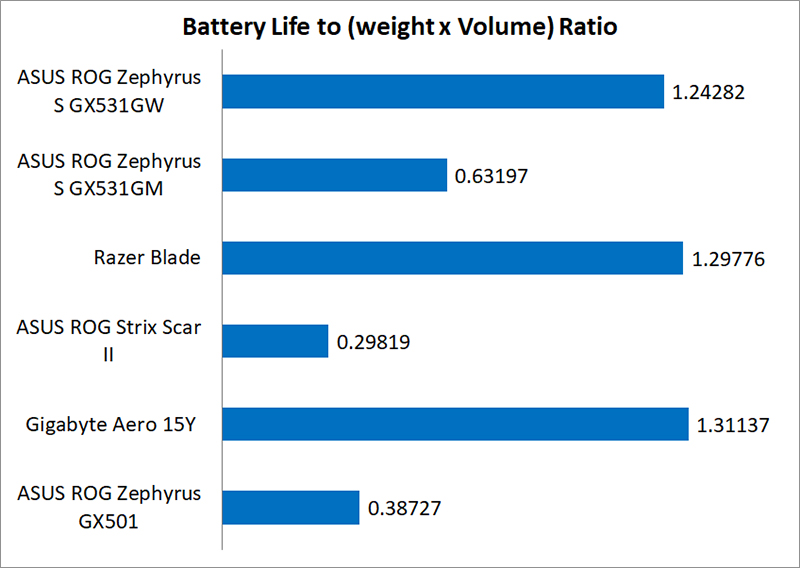 Temperature is always a concern with any slim and light gaming notebook, and it can really drag performance down, as seen with the Gigabyte Aero 15Y. Fortunately, it looks like the unconventional cooling design on the Zephyrus S has paid off here, and the notebook never became uncomfortably hot to touch. CPU and GPU temperatures are definitely higher than on the Pascal version of the notebook, but it doesn't look like performance has been affected much.

That said, its cooling performance comes at the price of a lot of noise, so you'll want to use the notebook with headphones on. 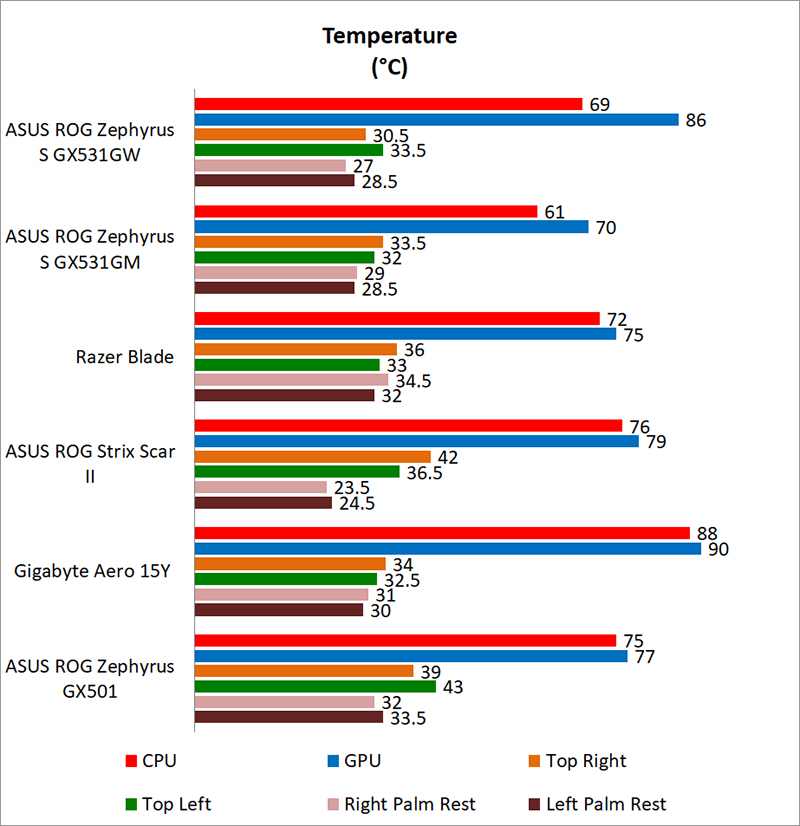