What's new in this Zephyrus? 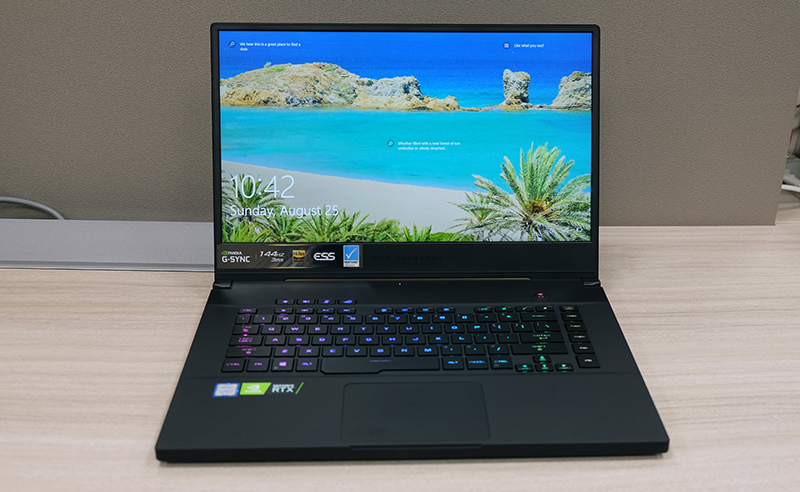 The biggest change coming from the ROG Zephyrus S GX531 is probably the keyboard layout. It looks like ASUS has decided to ditch the former's unconventional look, where the keyboard was located all the way against the front edge, in favour of a more traditional design where there are actual palm rests.

I wasn't that enamoured with the previous design, so I'm perfectly fine with this change, and I'm guessing most folks will be too. It's not that it was bad, but it wasn't necessarily better than the conventional design either.

The new Zephyrus S now has a distinctive blocky design that kind of reminds me of the Razer Blade 15. It features a sturdy magnesium-alloy chassis that is reinforced by a honeycomb structure under the palm rests to minimise flexing, and the result is a robust-feeling notebook that seems really well put together. Build quality is top-notch, and I have no complaints about any creaking or unwanted sagging in crucial areas. 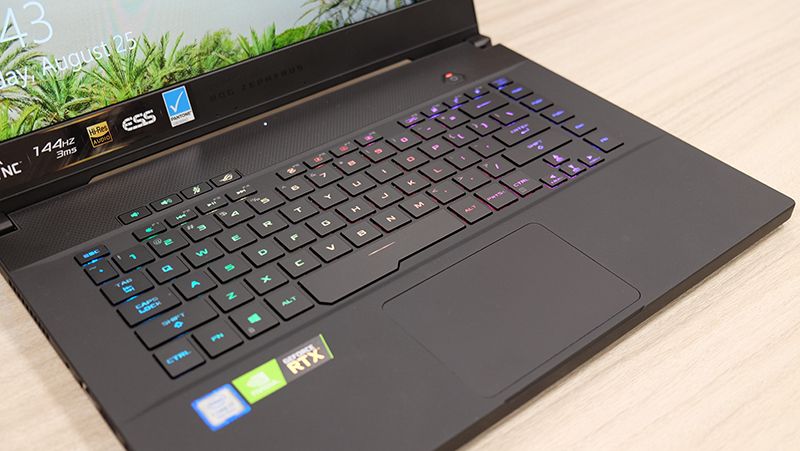 The chassis is coated with a soft-touch finish that I really like, and it appears to resist fingerprints quite well. There's a subtle sparkle in the paint if you look closely, but I do think ASUS could have done away with that entirely. 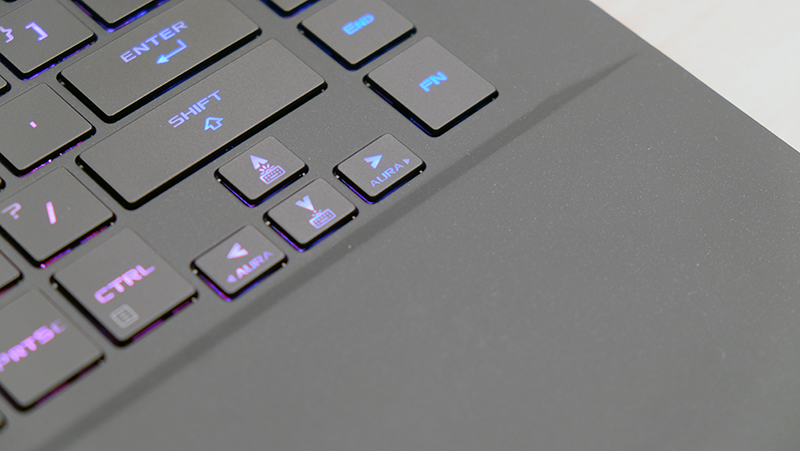 The lid boasts an attractive brushed metal finish that runs diagonally across its surface. It is topped off by a backlit ROG logo that glows a deep red when the laptop is powered on. Quite frankly, I think it looks great, and the design is pretty tasteful overall. When viewed from the front, it looks like it could almost pass off as a business notebook, and ASUS did say that it hopes the laptop will appeal to content creators as well and not just gamers. 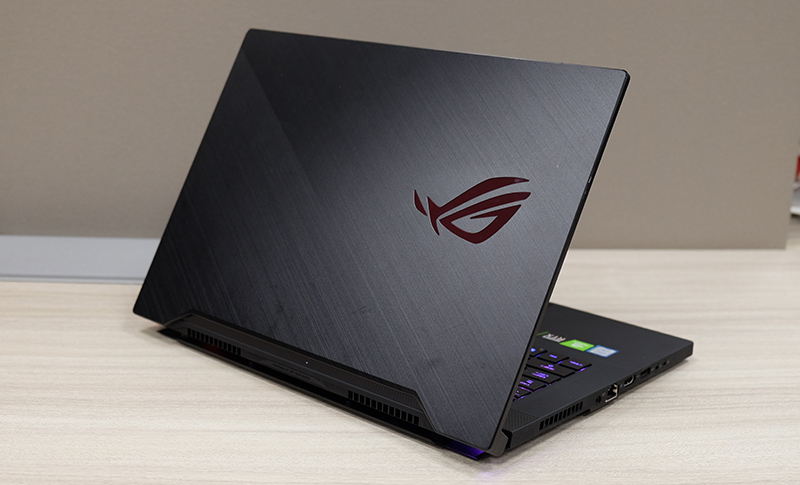 Is there anything special about it?

As far as I know, this is the only so-called portable gaming laptop to come with an NVIDIA GeForce RTX 2070 Max-P. That's pretty interesting if you ask me, and it possibly pushes the laptop toward GeForce RTX 2080 Max-Q territory while still remaining under S$4,000 (albeit barely). The GPU is also higher clocked than most others, boasting a 1,315MHz base clock and 1,540MHz boost clock in Turbo mode, compared to the 885MHz base clock and 1,185MHz boost clock on other Max-Q laptops. 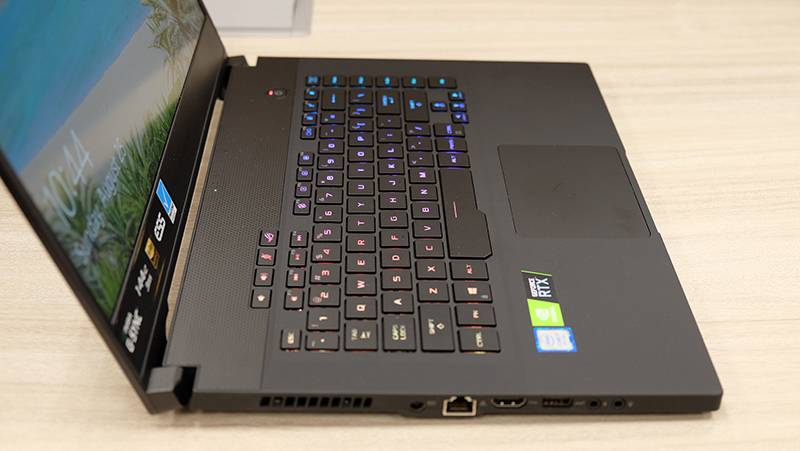 But what's really impressive is that ASUS has managed to cram the full-fat GeForce RTX 2070 into a chassis that is still extremely competitive with the slimmest Max-Q notebooks out there, such as the Razer Blade 15. Faster performance with perhaps a small hit on the battery front? I'll take it. ASUS has shown that you don't really need Max-Q to make a portable gaming machine, and I expect that this system will garner a fair bit of interest among those looking for a high-end gaming laptop.

That aside, the Zephyrus S still retains a few key design innovations from last year's model. First and foremost is the trapdoor-like bottom, which swings out when you open the lid. This lets the bottom fans draw in more air, and hot air is in turn exhausted through four vents at the back and sides of the laptop. 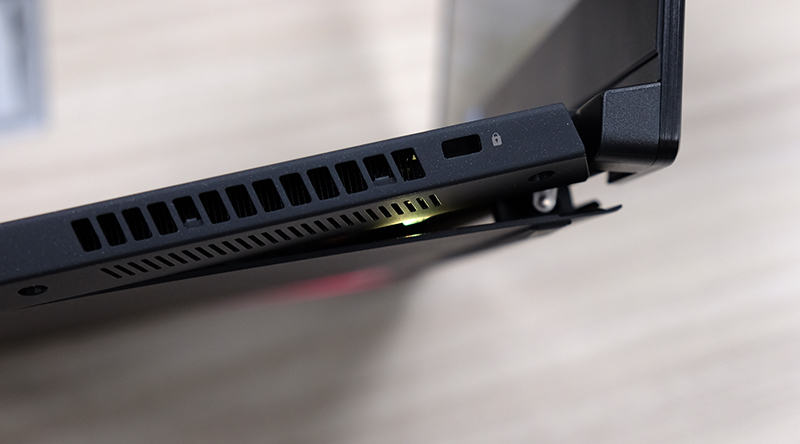 The cooling system comprises two 83-blade 12V fans and four copper heat pipes that lead to four finned heatsinks. The fans themselves also feature the anti-dust cooling design that we've seen on many ASUS laptops of late. This system relies on centrifugal force to drive dust particles into special dust tunnels so they don't clog up the cooling fins in the long run and ensure more consistent cooling performance further down the road. 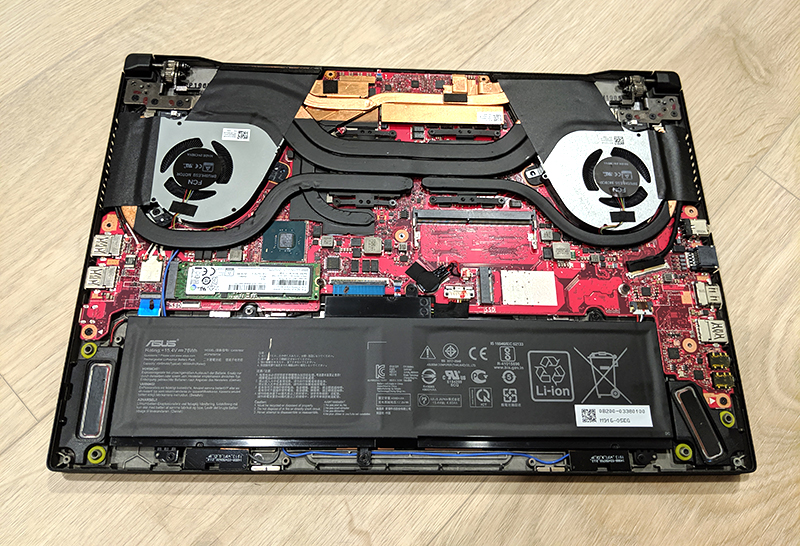 How are the display, keyboard, and speakers?

The 1,920 x 1,080-pixel display features a speedy 144Hz refresh rate and support for NVIDIA G-Sync. It also boasts a Pantone-validated screen for supposedly more accurate colours. I didn't evaluate the screen with any objective tools, but I have to say that I'm pretty happy with it. The screen was bright enough for the most part, and colours appeared sufficiently vivid, with no particular bias toward the warmer or cooler end of the spectrum.

That said, one thing to take note of is that the laptop actually ships with G-Sync disabled. You'll need to enter the Armoury Crate software and change the GPU mode to "Discrete" in order to enable G-Sync, so don't panic if you don't see the option for it in the NVIDIA Control Panel at first. By default, the Zephyrus S runs in Optimus mode, which is supposed to intelligently deactivate the GPU to save power when needed. 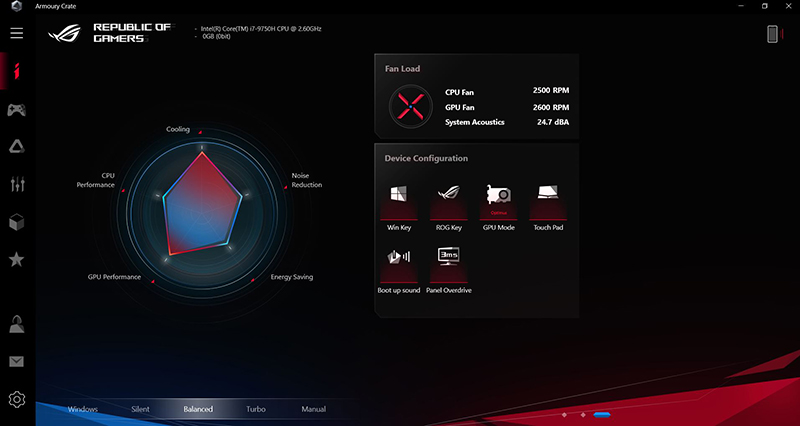 If you're not particularly concerned about battery life, you'll probably want to make the switch to Discrete mode to take advantage of G-Sync. NVIDIA's variable refresh rate technology gets rid of stuttering and tearing, and together with the 144Hz refresh rate, you should get a butter-smooth gaming experience. However, the high refresh rate alone does actually help mitigate any problems with stuttering and such, so you won't be missing out on too much if you opt to stick to Optimus mode.

The screen is framed on three sides by pretty slim bezels, which helps reduce the notebook's footprint. ASUS has also chosen to ditch the built-in webcam this time around, opting for an external GC21 webcam that is capable of 1080p60 capture. This could work out nicely if you've often wished for better camera and microphone quality on a laptop, but it does mean that one USB port will always be occupied. 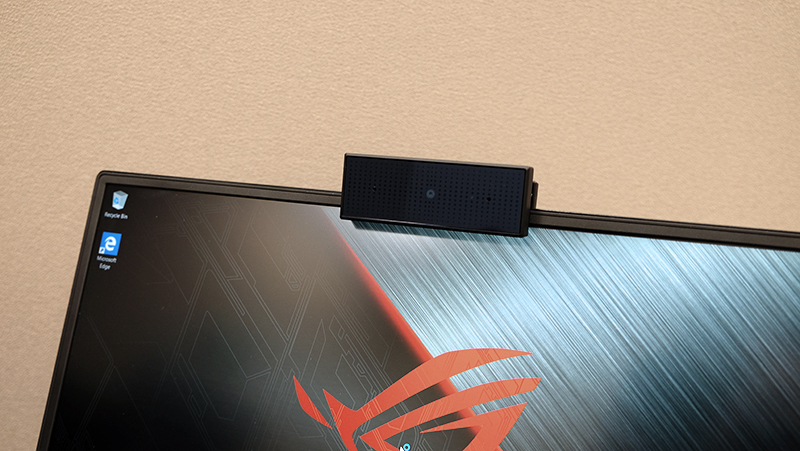 The keyboard has been improved compared to the Zephyrus S GX531, and it now offers decent travel and feedback. I like that the layout has been modeled after regular desktop keyboards as well, with the appropriate spacings between the blocks of function keys. Above the keyboard, you'll find dedicated volume adjustment buttons and a microphone mute key. The latter is especially handy as you never know when you might need to quickly mute your mic, and not all headsets come with an equivalent button. The fourth button launches Armoury Crate, in case you need to quickly change the performance modes or lighting settings. 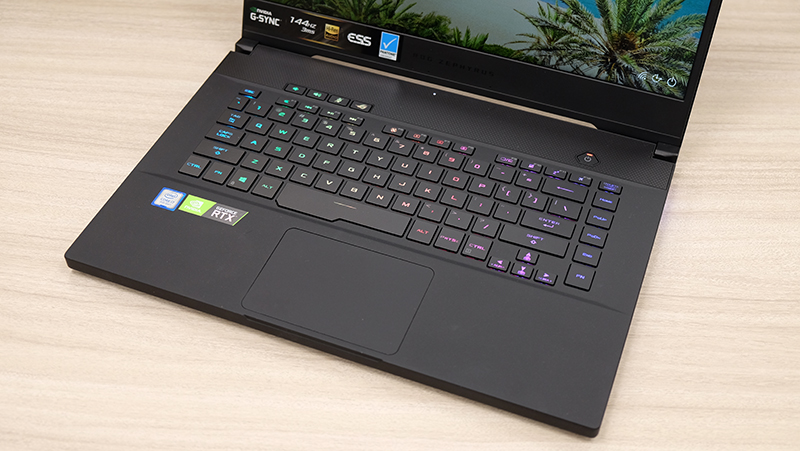 Per-key lighting customisations are supported, so you'll have plenty of freedom to create a lighting scheme that's truly yours.

The precision touchpad feels great as well, and the integrated left- and right-click buttons help create a cleaner and more modern look.

Finally, the dual 2.5W stereo speakers sit at the bottom of the laptop. They're about average for laptop speakers, and while they do get loud enough, they tend to lack definition. The low-end also sounded kind of anemic, and there's noticeable distortion at maximum volume.

The selection of ports is quite decent, and you get one USB 3.1 (Gen 2) Type-C, one USB 3.1 (Gen 2) Type-A, two USB 3.1 (Gen 1) Type-A, one HDMI 2.0b output, and a Gigabit Ethernet jack. The USB-C port supports video output over DisplayPort 1.4 as well, in addition to USB Power Delivery so you can charge the Zephyrus S using a universal Type-C charger or portable power pack (both of which are optional and isn't bundled). 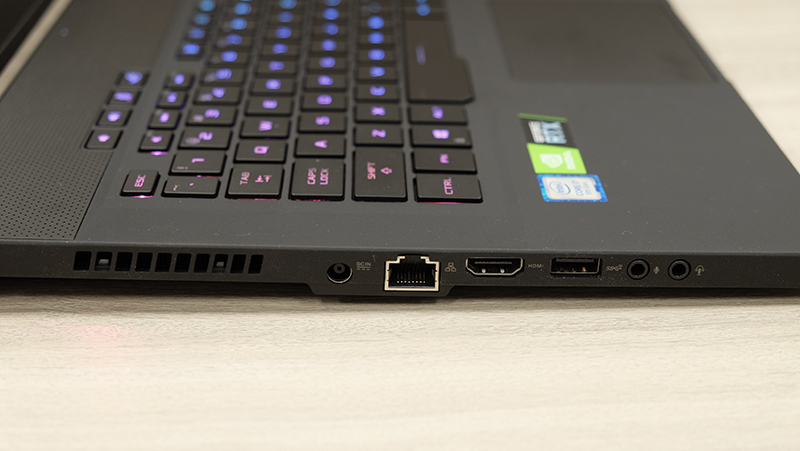 Furthermore, with both HDMI 2.0b and DisplayPort 1.4 outputs, you can connect up to two 4K HDR monitors. There's no SD card slot of any kind, although that may not be too big a concern for a gaming laptop. 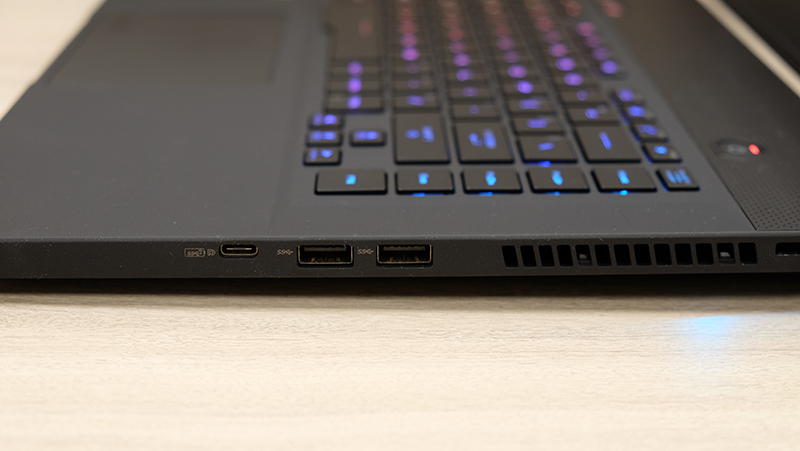 For onboard Wi-Fi, you get an Intel Wireless-AC 9560 wireless module, which supports a maximum wireless throughput of up to 1.73Gbps. 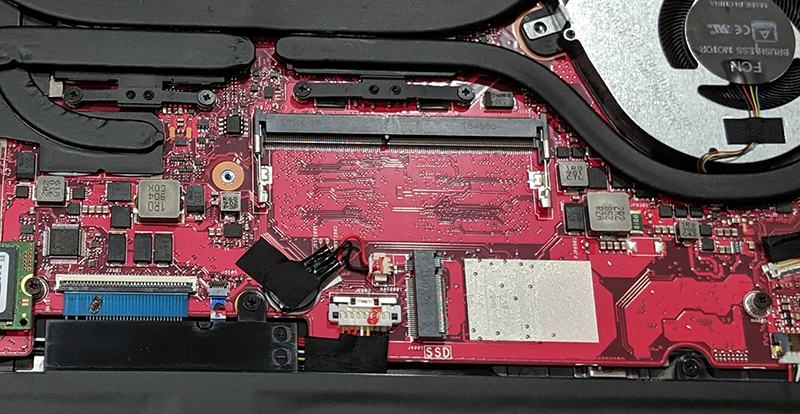 The Zephyrus S is a great laptop, but there's a catch. Like the ROG Strix Scar III GL531GW, it comes with just a single stick of 16GB memory. What's more, this stick is soldered onto the rear side of the motherboard, and ASUS has left free a single SO-DIMM slot for you to do your upgrades.

While I appreciate the company's intention to offer an upgrade path to expand memory when the job on hand requires it, this design choice comes with major drawbacks. Firstly, single-channel memory results in a huge performance deficit when compared to dual-channel memory, and secondly, it doesn't seem reasonable at all to expect someone to pay S$3,998 for a performance laptop and still have to fork out more for an extra stick of RAM to obtain optimal performance.

This problem is unfortunately made worse by how certain games or applications manage system memory. All GeForce RTX systems running Intel processors with single-channel memory that use MS Hybrid, which is Microsoft's implementation of NVIDIA's Optimus technology, are reportedly affected. But that said, the onus is still on ASUS to provide the best possible performance it can, and there should be no excuses at this price point. What's the actual impact of not having dual-channel memory? Find out on the next page.