For my comparisons, I have opted to refer to past notebooks that we had reviewed before. These are:

Admittedly, choosing the notebooks to stack up against the ROG Zephyrus G14 was challenging not least because we do not have any recent AMD-powered notebooks that we can use as a baseline to compare it with. So, I have picked these four gaming notebooks to not only check how the GeForce RTX 2060 in the Zephyrus G14 stacks up against its 2070 Max-Q variant brethren, but to also provide an indicator of how the AMD Ryzen 9 4900HS, with a base clock of 3.0GHz (max boost clock up to 4.3GHz) match up to Intel-based gaming notebooks using H-series performance processors.

These are the games and benchmarks that I ran on the Zephyrus G14:

PCMark 10 is a synthetic benchmark that evaluates systems based on workloads that can be categorized into four distinct groups, comprising Essentials, Productivity, Digital Content Creation, and Gaming. This includes tests such as app start-up times, web browsing, word processing and spreadsheets, photo and video editing, and rendering and visualization tasks. Finally, gaming performance is evaluated using the Fire Strike benchmark. 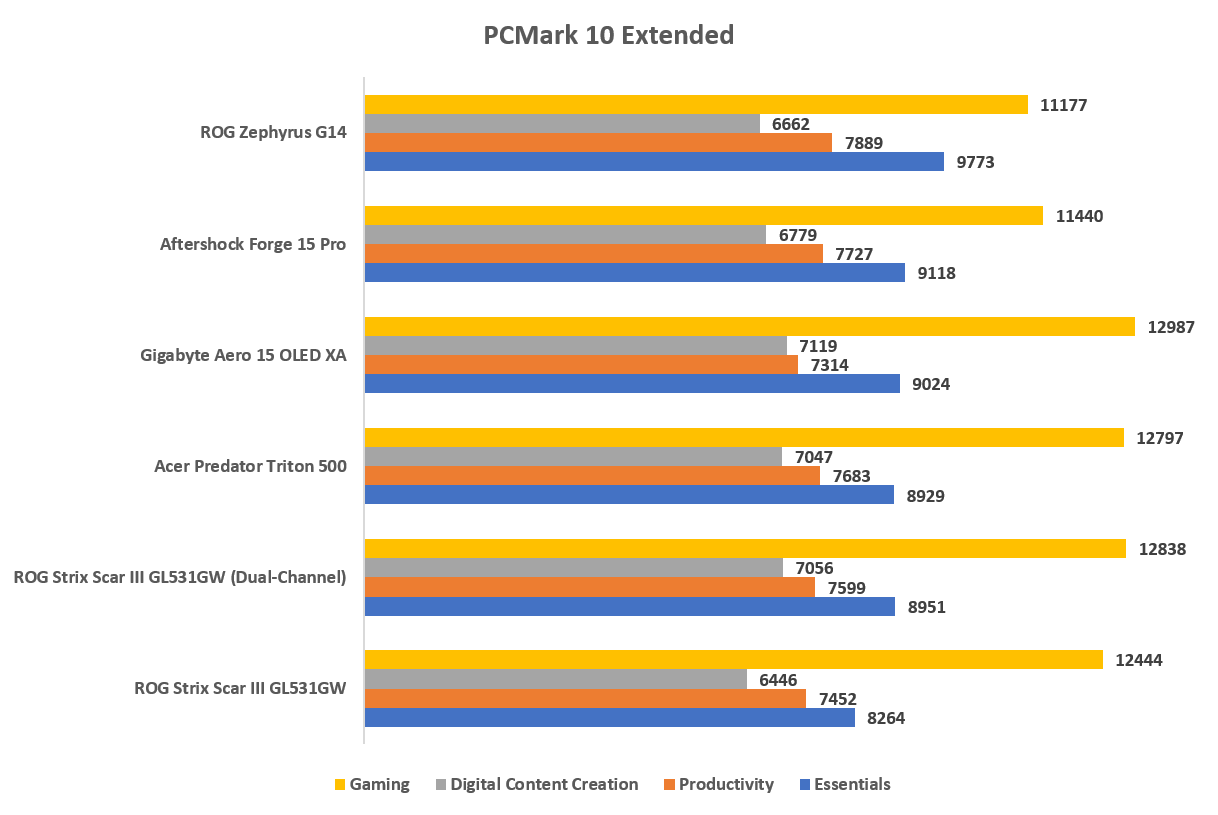 ASUS has been known to produce top notch gaming products, but their continued insistence in using single-channel memory as opposed to dual-channel (as with almost all of their competitors) for their notebooks is a handicap to performance – as seen in the results below where we had previously compared how the ROG Strix Scar III GL531GW would have performed if it was running on dual-channel memory (2x8GB). The results above are quite clear for both productivity or gaming - dual-channel memory does have a positive impact on performance. ASUS’ reason for this, was to give consumers a spare DIMM slot for when they wish to upgrade their ROG notebooks’ memory count to 32GB (2x16GB), but the downside here also meant that their notebooks do not perform to its full potential out of the box.

What about games performance?

That the Zephyrus G14 lags behind the rest of the notebooks here is not unexpected, as its RTX 2060 is slower than the superior RTX 2070s but not that far off from the Aftershock Forge 15 Pro, which also uses the same RTX 2060 chip. But the interesting observation here is how, if a CPU bound game like Shadow of the Tomb Raider is optimised for Ryzen processors, that the Zephyrus G14 can come close to – if not outperform – the Intel notebooks. 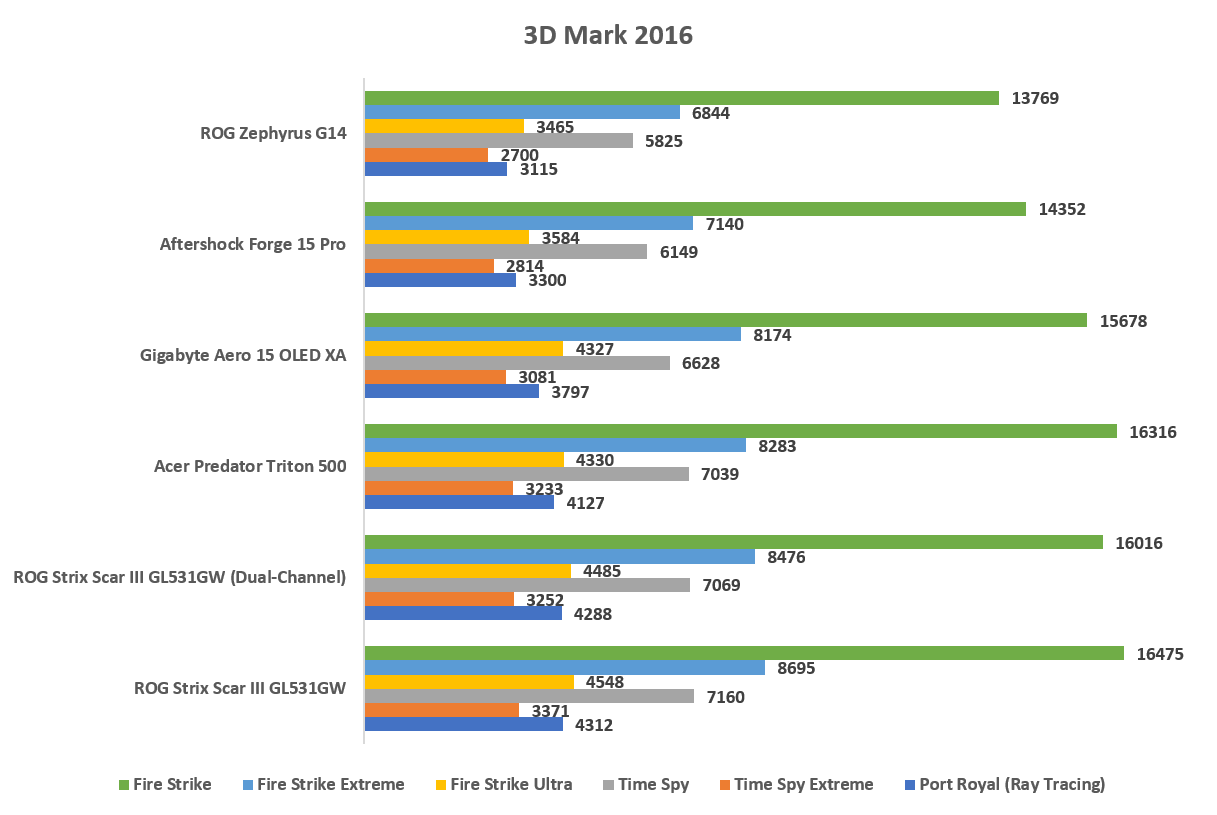 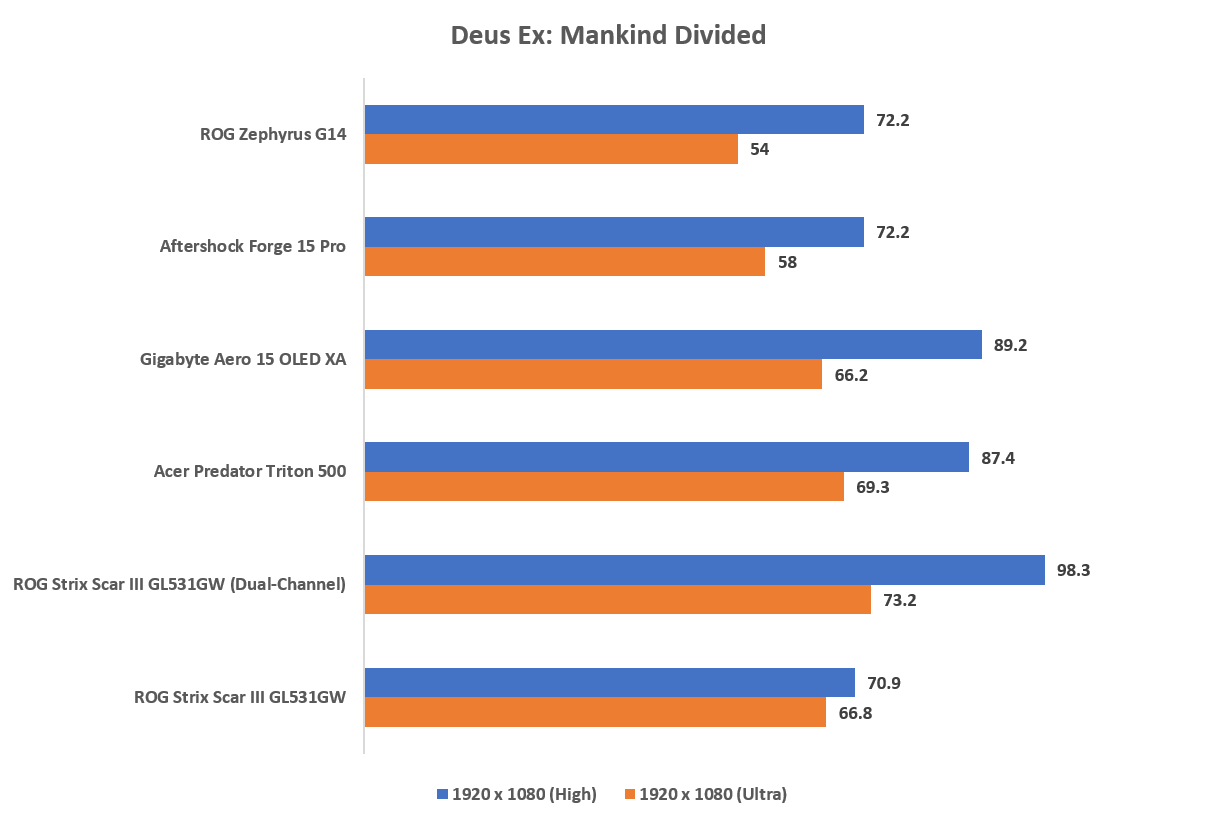 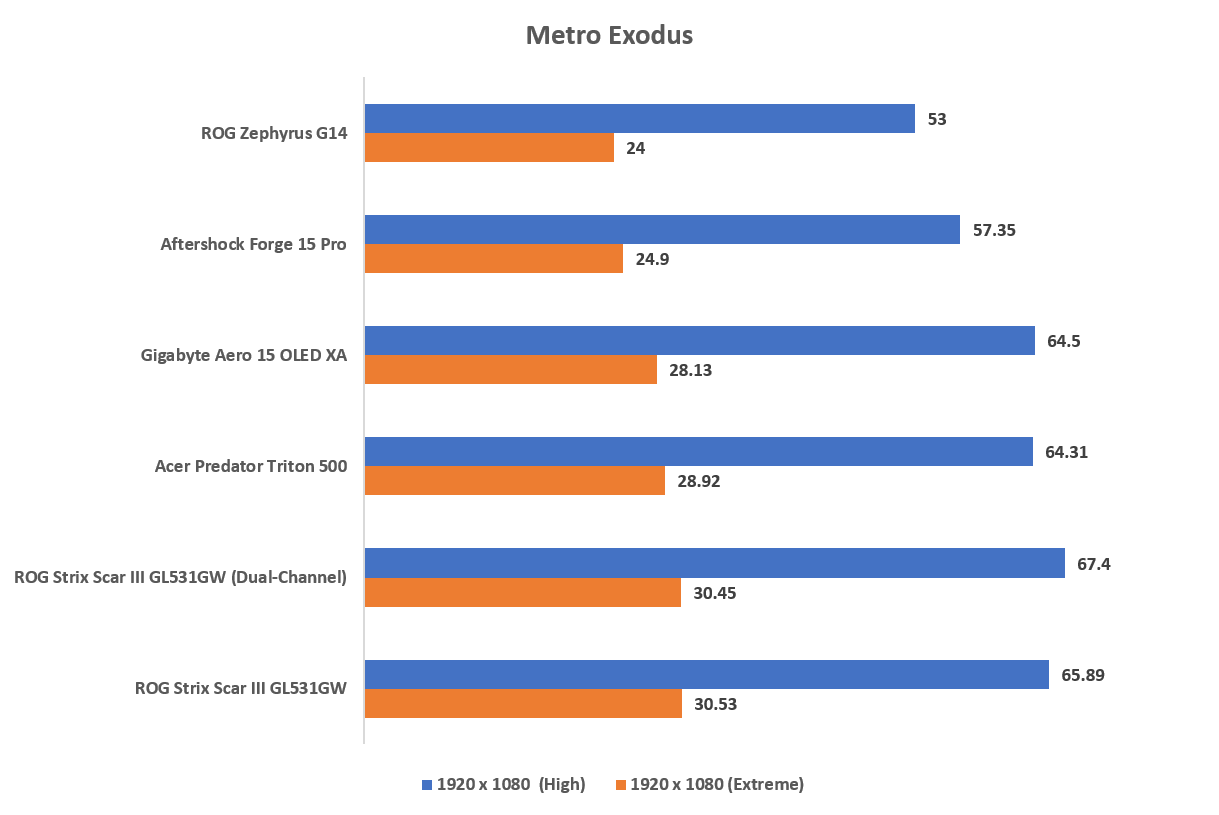 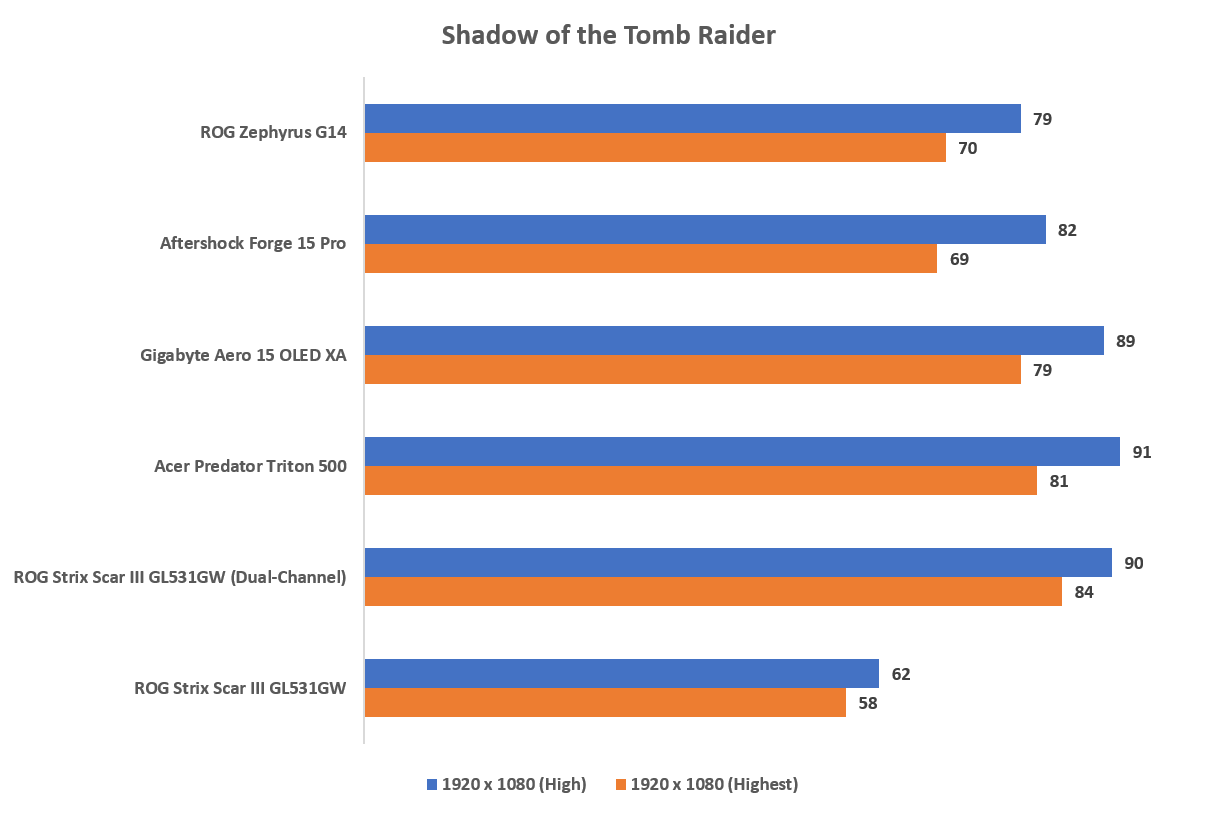 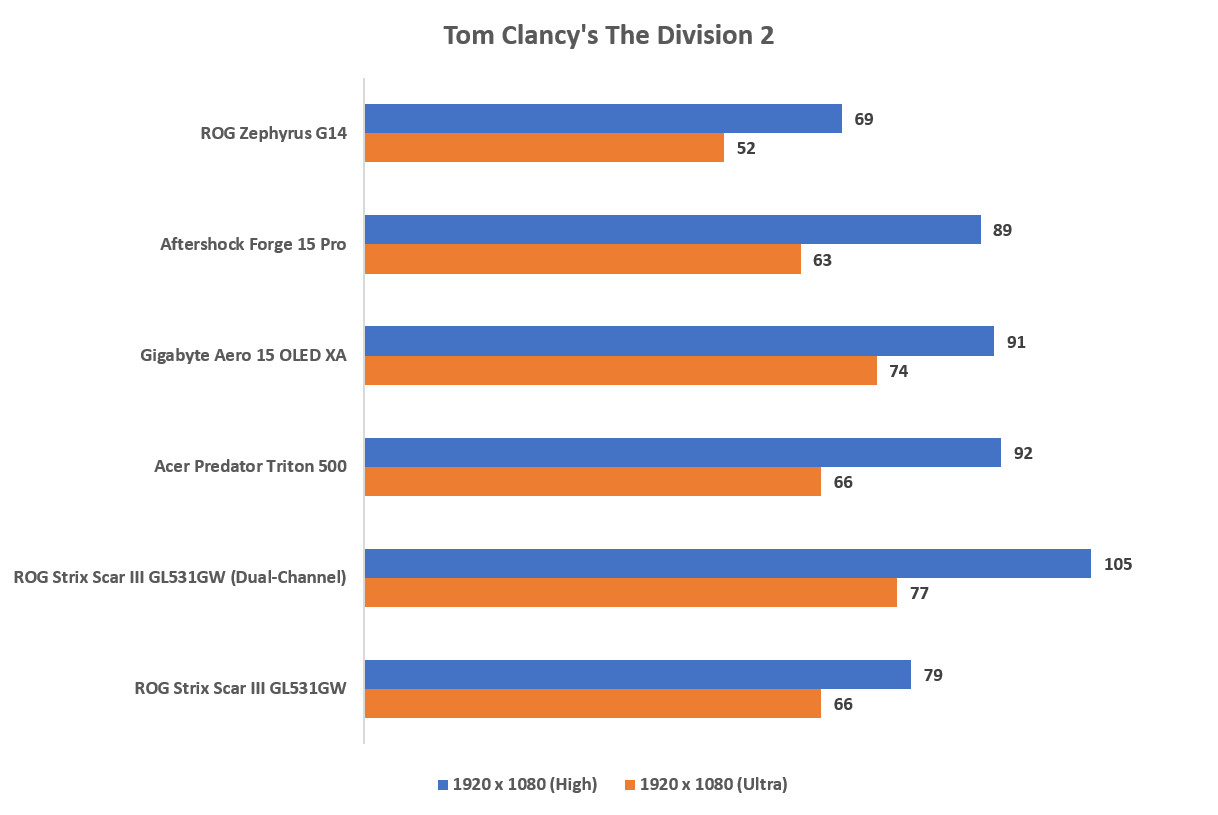 So, the question is this. Will the ROG Zephyrus G14 perform even better if it had been crammed with two 8GB of memory instead of one 16GB? Very much so, especially in games that are CPU bound – like Tom Clancy’s The Division 2 and Shadow of the Tomb Raider. These are really impressive results.