What a battery life!

For battery life tests, I settled on PCMark 10's new Modern Office and Gaming battery life benchmarks and the results were quite eye-popping. The Zephyrus G14 outlasted the rest of the other notebooks and then some. To find out more about how this benchmark works and why we are using it, here's our investigative piece. 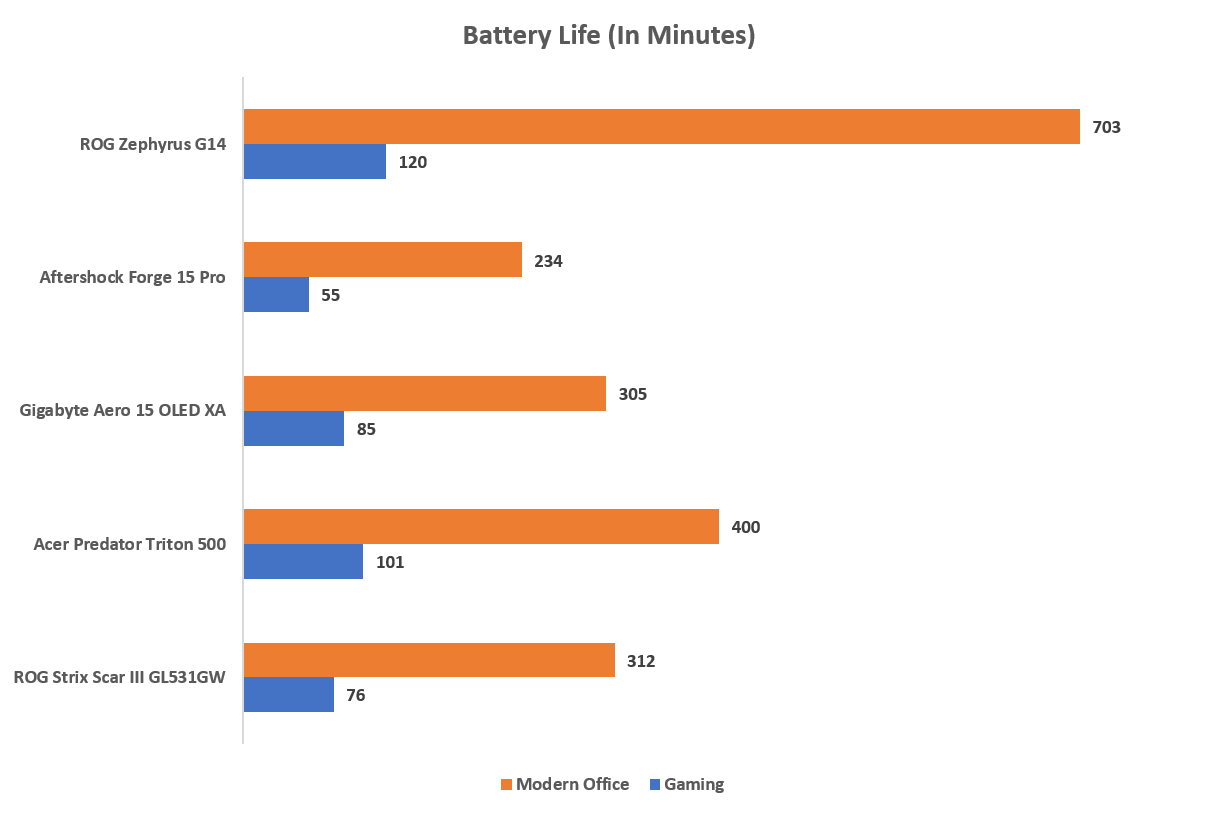 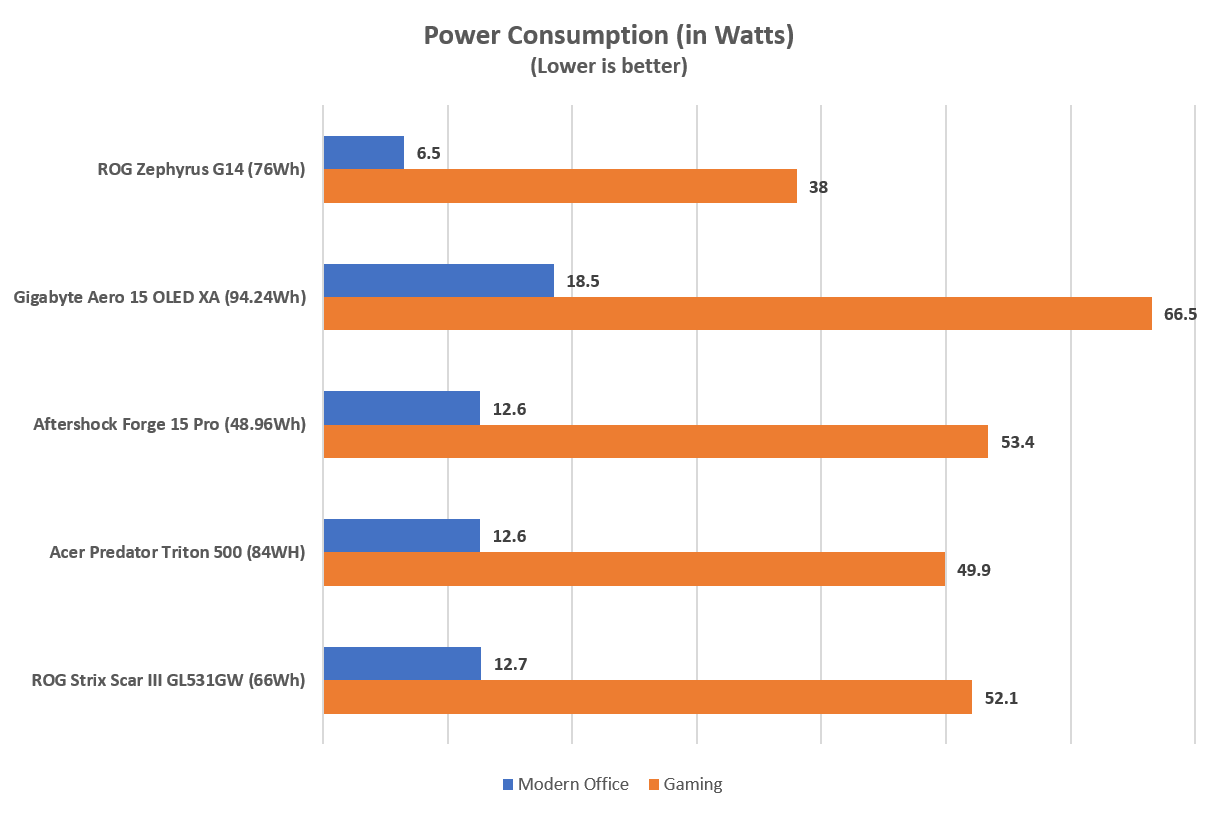 It’s also quite impressive that ASUS has managed to cram in a large 76Wh battery inside a 14-inch chasis, and combined with NVIDIA and AMD’s newest Ryzen 4900HS optimisations for battery, power efficiency and design, it gives the ROG Zephyrus G14 an excellent balance of performance and battery life of any gaming notebook for the moment. We've literally never seen such high battery life uptime on any decent gaming notebook... ever. 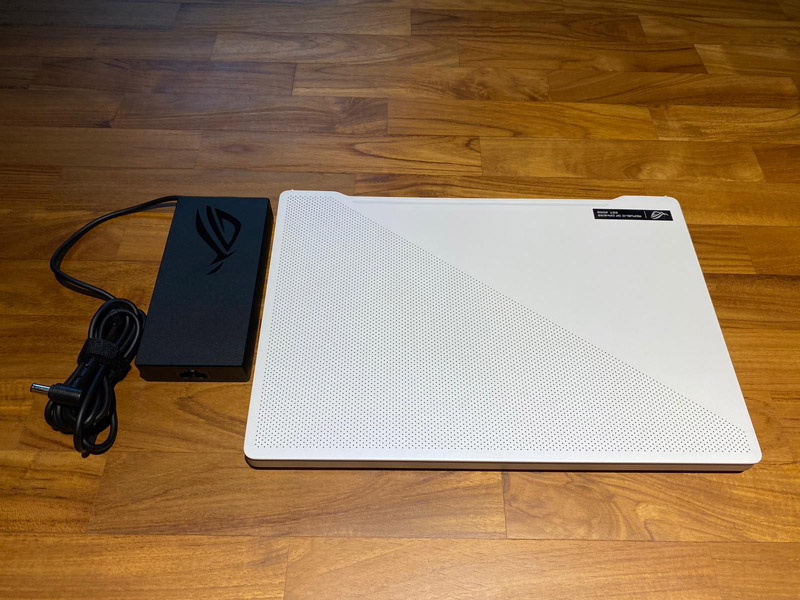 I really like the ROG Zephyrus G14. I really do. It can charge via USB-C, albeit slower, if you do not wish to use the chunky 180W standalone adaptor. Thunderbolt 3 is non-existent though, unsurprisingly, since that’s Intel’s proprietary standard. It’s the downside of using an AMD system but the Zephyrus G14 also comes with HDMI and DisplayPort, so I don’t feel that many (especially gamers) will miss out. The notebook has a Full HD resolution screen with a 16:9 aspect ratio that runs at 120Hz, which is the norm for the better specced smaller gaming notebooks these days. There is no 4K panel option, which would be a big ask of the GeForce 2060 Max-Q anyway (not to mention a hike in price and a hit in battery life, plus not being able to appreciate 4K resolution on such a small screen). 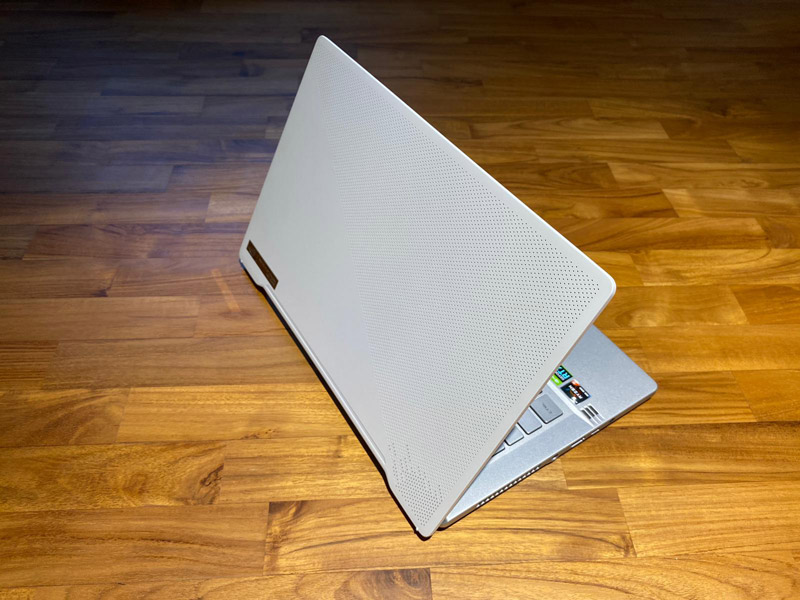 The ROG Zephyrus G14 is a triumph for both ASUS and AMD, having successfully worked together to put out a gaming notebook that can finally put Intel on notice. As it is, the notebook has plenty to offer, but I will still have to take a retail unit (once I get my hands on it) for a spin before I can draw conclusions on its overall worth. While ASUS has let on that the Zephyrus G14 will be available in Singapore sometime in May, they have yet to talk about the elephant in the room – pricing. AMD has traditionally targeted at price-conscious consumers and I will be surprised if ASUS steers the Zephyrus G14 towards the same price direction as their Intel-based products.

Regardless, one thing is clear. AMD has finally thrown down the gauntlet on what a gaming notebook can be.