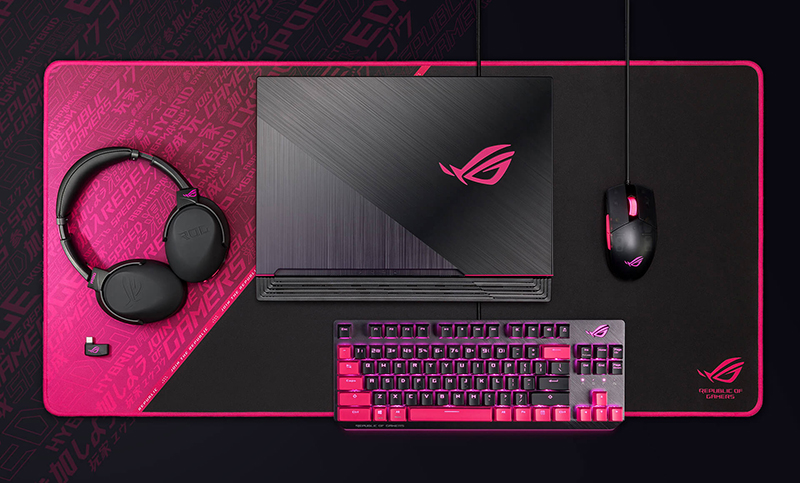 ASUS' new Electro Punk peripherals are all decked out in black and neon pink, a striking colour scheme that will probably be as polarising as it is bright. That's not to say that it is unattractive though, and I personally enjoy the fresh burst of colour that ASUS has injected into this line up. However, the products here are mostly recolours of existing peripherals, so they largely stand and fall on the merits of whatever they're based on. ASUS may be attempting to capitalise on the hype surrounding all things cyberpunk in the lead up to the release of CD PROJEKT RED's Cyberpunk 2077, one of the most hotly anticipated games of the year, and I expect there'll be an audience for it even if it deviates from the game's distinctive yellow.

The ROG Strix Scope TKL Electro Punk gaming keyboard is basically a pink ROG Strix Scope TKL, featuring the same tenkeyless form factor, Cherry MX switches, and brushed aluminium top plate. The chassis is mainly plastic, but the aluminium top plate helps confer some extra rigidity and there's no flex to the board at all. The floating keycap design is also a plus, since it makes it easier to clean the keyboard without removing the keycaps. 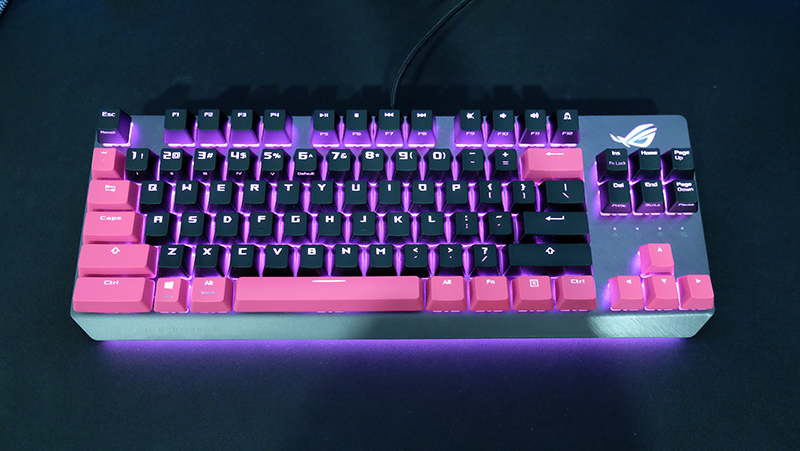 I also like the more compact tenkeyless form factor, since it provides more mousing room for low sensitivity players and makes the keyboard easier to centre and more ergonomic to use. Full-sized keyboards are an absolute no-go for gaming if you ask me, and I've always found them too large and unwieldy.

The pink keycaps aside, the thing that most sets the keyboard apart from the competition is its so-called Xccurate layout. It has an extra-wide left Ctrl key, so FPS players will have an easier time hitting it to crouch. This is a thoughtful design decision, but I'm not too sure how much value it really adds. Having played FPS games for most of my life, I can't recall an instance where I missed the Ctrl key or wished it was wider. Furthermore, the extra-wide key means that the keyboard has a non-standard bottom row, so shopping for third-party replacement keycaps is going to be a lot harder. The stock pink keycaps are nice, but I'm not sure that I'd give up the option to customise my keyboard for a larger Ctrl key. 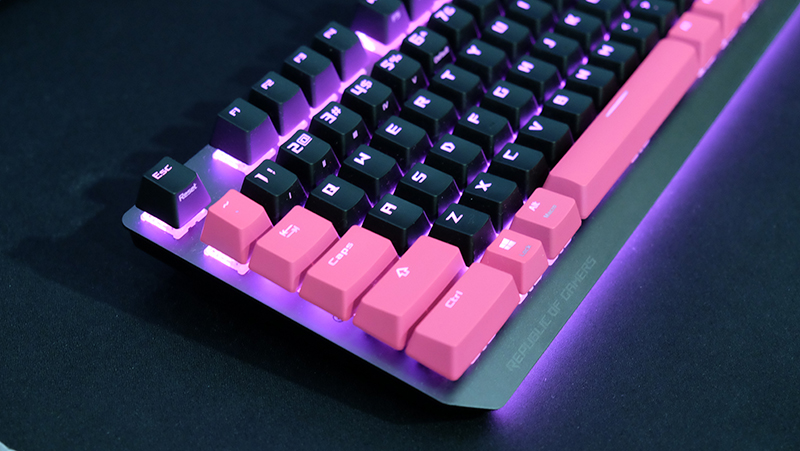 Elsewhere, ASUS has built a bunch of useful shortcuts into the keyboard. My favourite is the Stealth key, which is bound to F12. It instantly hides all apps and mutes all audio, ensuring privacy quickly when you need it. Pressing it again returns everything to the way it was, so you can resume what you were doing right away. ASUS has also chosen to make the media control keys the default key bindings on the F5 to F11 keys, so you get things like pause, play, skip, volume controls and mute. This is a good stand-in for dedicated media keys as the function keys aren't used that often unless you need them in game. Alternatively, the Quick-Toggle switch will let you switch between function and media key inputs if you find yourself needing the function row more.

You can also disable the Windows key without using software by simply hitting Fn + Windows, which is pretty useful and convenient. Separately, Armoury Crate does let you disable more key combinations in Gaming Mode, including Alt + Tab and Alt + F4. In addition, you can switch between different profiles by holding down Fn and one of the assigned number keys from 1 to 6.

The ROG Strix Scope TKL Electro Punk also supports per-key RGB lighting customisations via the Armoury Crate software. The default colour is a vibrant pink that matches the keycaps, and there's also a pleasant underglow along the front of the keyboard. It is part of ASUS' Aura Sync ecosystem as well, which means the effects can be synced with compatible peripherals and even ASUS motherboards and graphics cards. Armoury Crate gives you a total of 11 presets to choose from, but you can also head into Aura Creator to create your own effects. 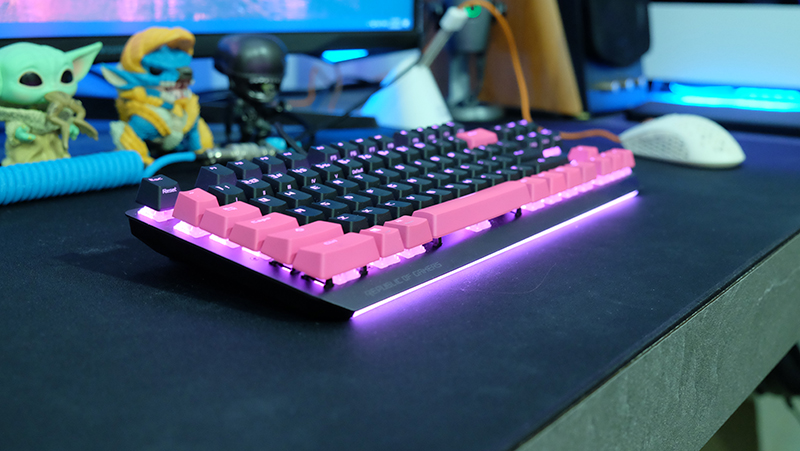 Backlighting is reasonably even, particularly since the secondary legends are on the same row as the primary legends and sit directly above the individual LEDs on each switch. However, I do find the legends on the keys a little too wide and thick, which gives the lighting a more diffuse effect.

My review unit comes equipped with Cherry MX Red switches, which are relatively light linears with an actuation force of 45g. They're great for gaming and I'd take them over clicky blue switches any day. There is some key wobble present, but it's nothing too egregious and you won't notice it in game. The keycaps are ABS plastic, and they don't produce as satisfying a "thock" sound as denser PBT. They're also going to shine over time, which only makes me wish even more that ASUS had gone with a standard bottom row of keys so replacements would be easy to find. 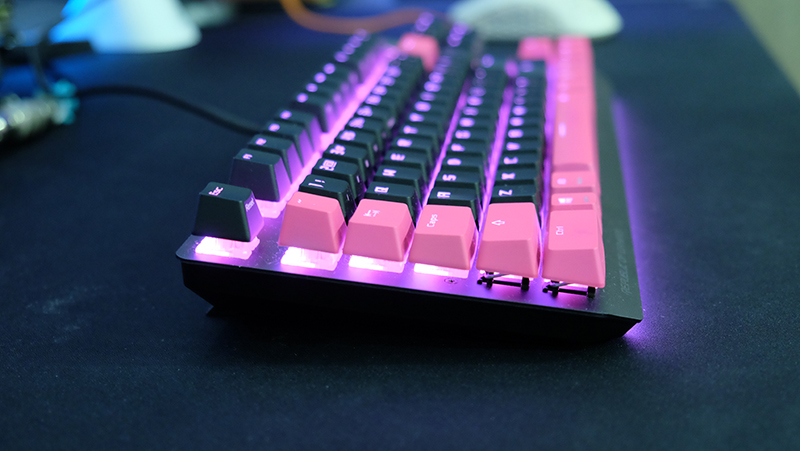 One final gripe I have is how difficult the USB-C cable is to plug in. The board ships with a detachable USB-C cable, which should make transporting it a little easier, and I do like that ASUS has ditched the antiquated micro-USB connector. However, the cable is weirdly difficult to plug in, and I found myself checking if I was even using the correct one. The USB-C port on the keyboard sits in its own recessed niche, and you have to align the cable with it perfectly and use quite a bit of force to push it in. This niche also means that not all custom cables will work with it, yet another thing to consider if you enjoy customising your keyboard with keycaps and cables of your choosing.

At S$259, the ROG Strix Scope TKL Electro Punk is no small investment. Unfortunately, I'm not sure it does a lot to justify the price tag, especially considering that there are better and cheaper alternatives out there like the S$219 Razer Huntsman Tournament Edition. The latter comes with doubleshot PBT keycaps, optical switches, a standard bottom row, and a better designed USB-C interface that will also easily accommodate custom cables. The backlighting also looks better to my eyes and I find its design a lot more tasteful. 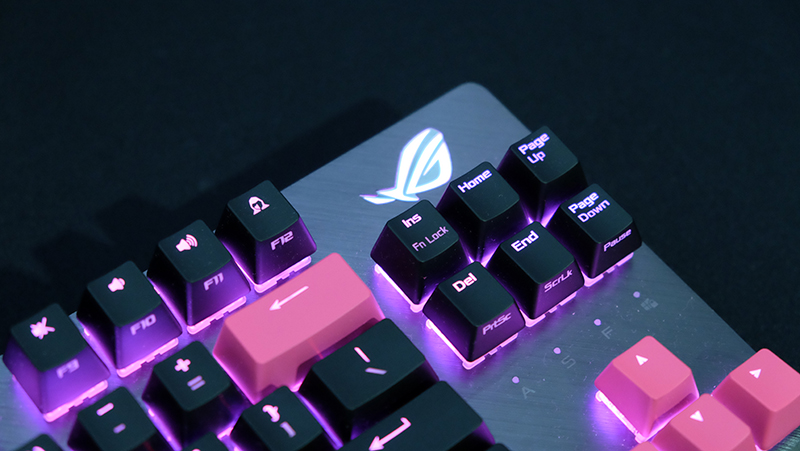 The ROG Strix Scope TKL Electro Punk isn't a bad keyboard, but it is up against some stiff competition, and I think it needs to do more to differentiate itself in terms of design and hardware. The shortcuts like the built-in Stealth mode are helpful, but not life-changing, and I'd like to see ASUS step up to the plate with more enthusiast-oriented options such as PBT keycaps and better support for third-party keycaps and cables.