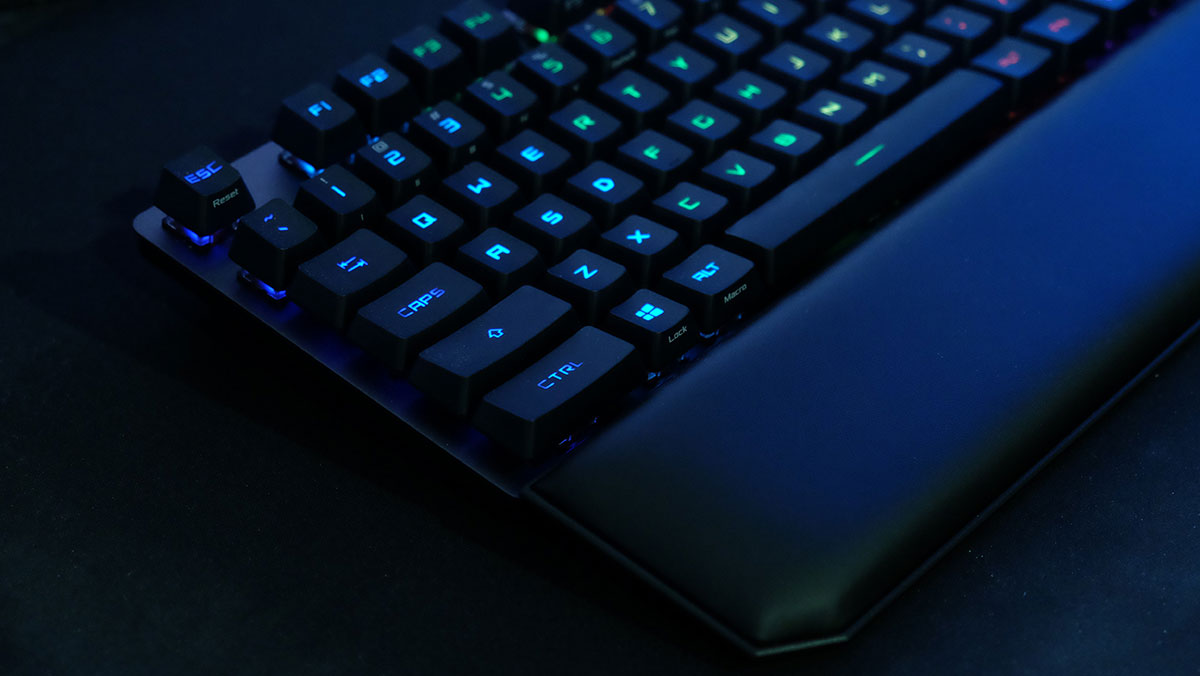 While its name may be a mouthful, the ASUS ROG Strix Scope RX TKL Wireless Deluxe has been designed with a clarity of purpose that few other gaming keyboards can match. It was made specifically for FPS players, with unique features such as an extra-wide Ctrl key to make crouching easier.

It's also a solid keyboard that offers just about everything you could want from a TKL, including three different connectivity options and durable PBT keycaps. The more compact tenkeyless form factor provides more room for your mouse as well, although you'd still be better served by a 60% keyboard.

Together with a plush magnetic leatherette wrist rest that snaps on without a hitch, its versatility and comfort also make it an excellent all-rounder. 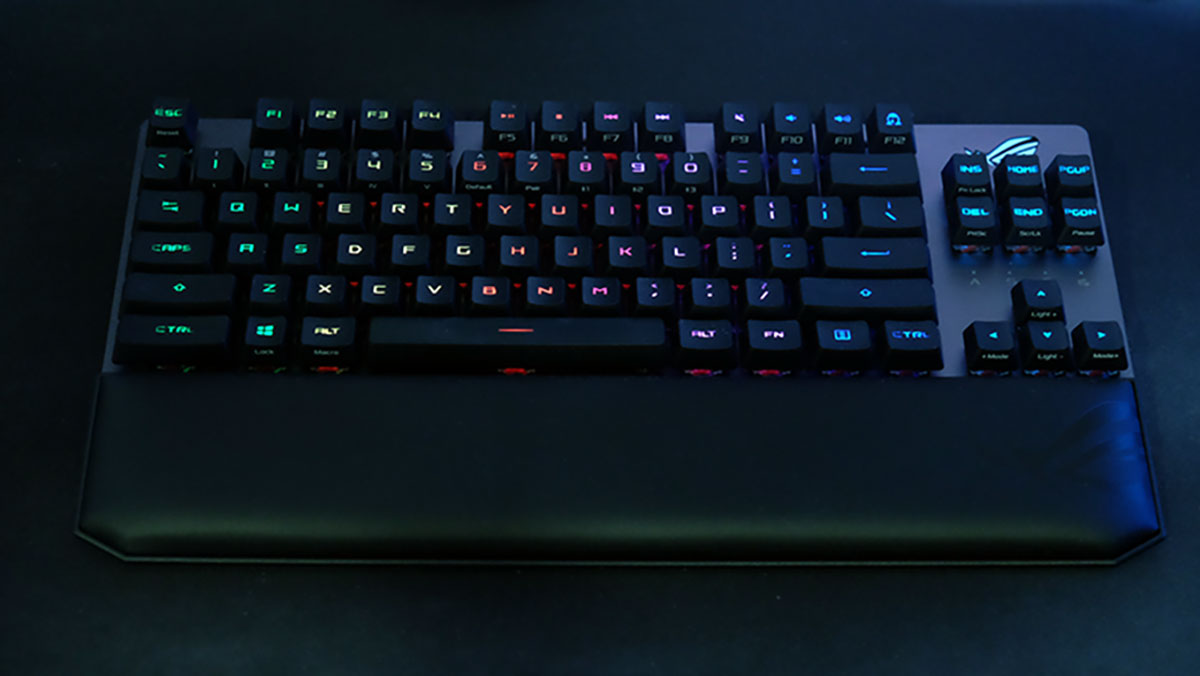 There is support for Bluetooth, 2.4GHz wireless, and wired USB-C connections. A switch at the back of the keyboard lets you toggle between each of the three modes. There is also a dedicated niche next to it for storing the dongle, making sure you don't lose it and transport slightly easier.

The 2.4GHz mode is rated for up to 76 hours of use on a single charge, and I didn't notice any delays or missed keys. This mode, or the wired option, is preferred for gaming, since the latency with Bluetooth is noticeably higher.

The ROG logo in the top right doubles as a convenient battery life indicator, changing between green, blue, and red according to the battery level. 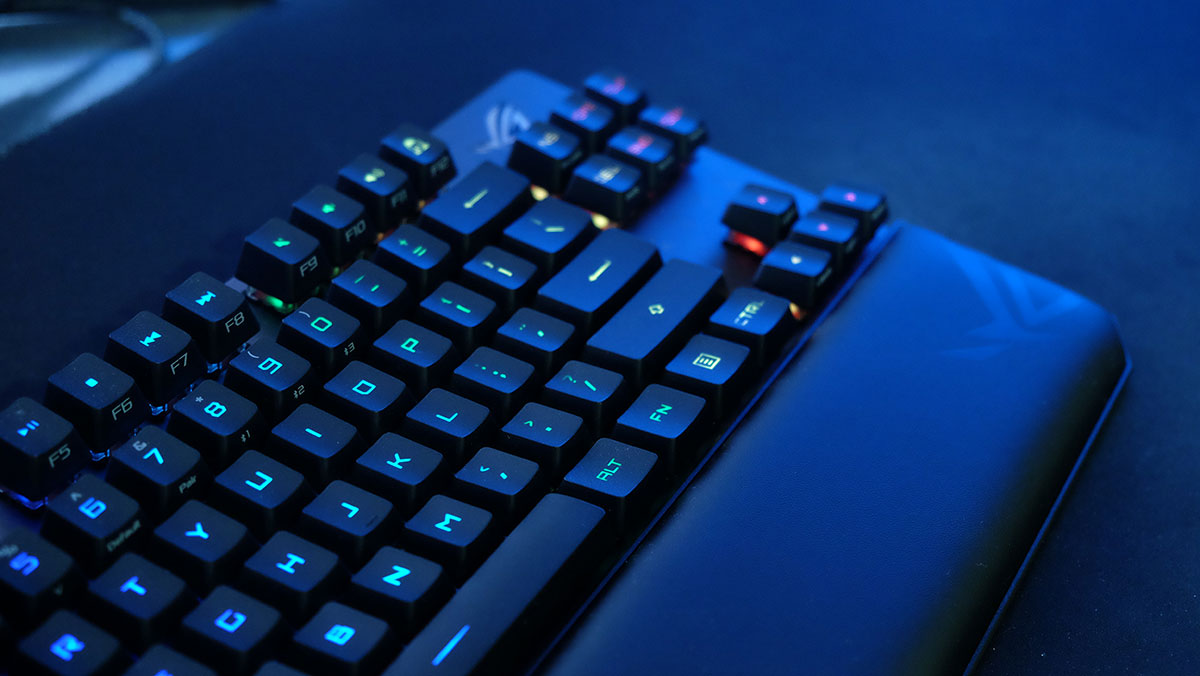 There is also an included wireless dongle extender to interface between the braided cable and the dongle, allowing you to bring it closer to the keyboard if you need.

The Bluetooth mode may come in handy if you also use the keyboard for work or productivity purposes. It can pair with up to three different devices, and you can switch between them on-the-fly using the 8, 9, or 0 number keys.

The RX Red optical switches provide a smooth and satisfying typing experience. These are progressive 55g linear switches with a 1.5mm actuation point, which means they are fairly light and responsive. The amount of force required actually starts out at 40g, before ramping up to 55g at the bottom of the keystroke.

The switches use what ASUS calls a "wobble-free X-stabiliser" to help reduce switch wobble. It comprises a large, hollow square stem with four corner latches, which is more stable than the narrower MX-style stems on most other switches. This appears to have been successful at keeping wobble to a minimum, at least when compared to competing mechanical keyboards that use Cherry MX switches. This also makes it a better keyboard from a stability perspective than their ROG Strix Scope NX TKL that we reviewed earlier using ROG NX switches. 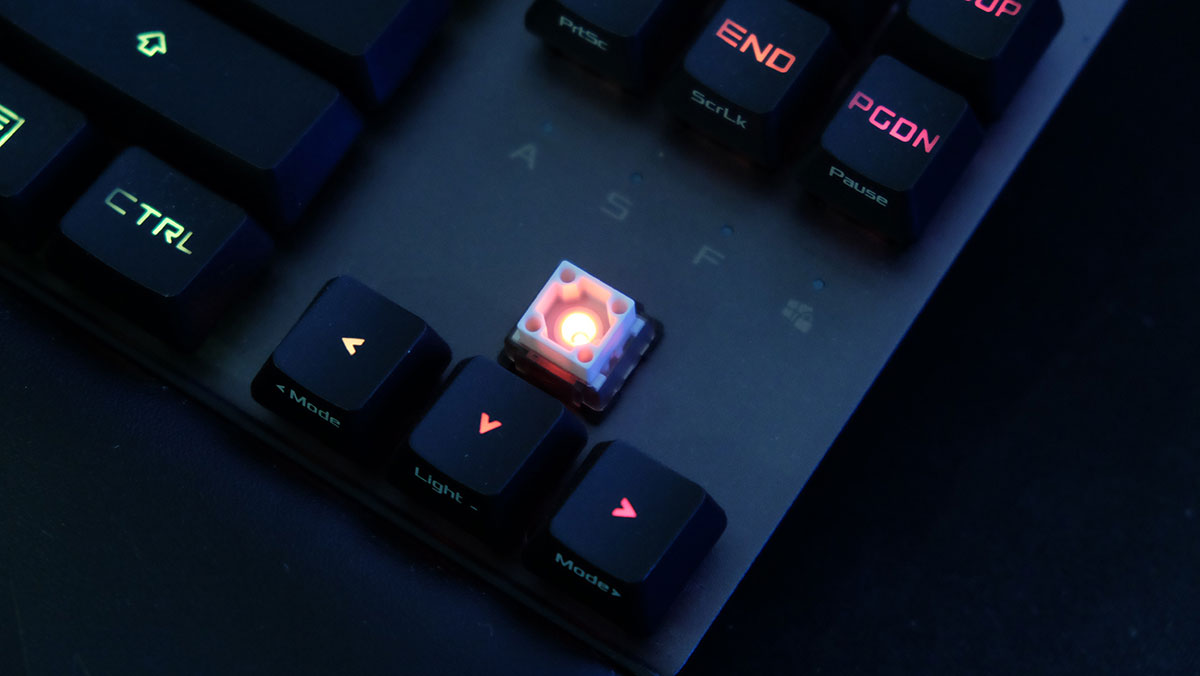 A light tunnel in the middle pipes the LED lighting straight to the keycap, allowing for brighter and more even illumination that doesn't have to diffuse through any translucent plastic. You can customise the lighting and effects of each key on a per-key basis in the Armoury Crate software, and the keyboard can be synced with other Aura Sync compatible products.

Elsewhere, the optical switches rely on light, instead of metal contacts, to register key presses. In theory, this means quicker actuation because there is no need for any debounce delay. In practice, however, it's difficult to say that there is a tangible difference.

The PBT doubleshot keycaps are also an upgrade over cheaper ABS plastic, offering a more textured surface that is resistant to shine. The denser plastic also delivers a deeper sound profile that contributes to an overall better typing experience. At the same time, the doubleshot molding process means that the legends will never fade. 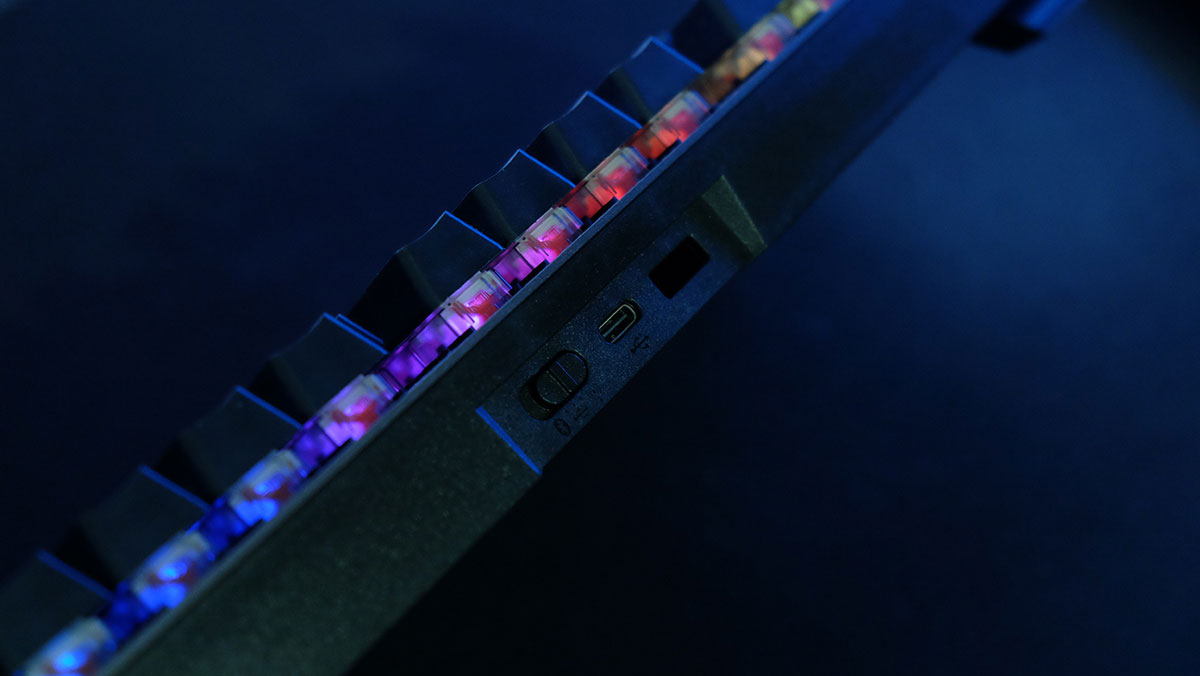 Unfortunately, the non-standard switch design with its four latches means that you're stuck with the default keycaps. There is no option for third-party keycaps at all. This is as unlike the ROG Strix Scope NX TKL which still offers this possibility, though not for all the keys.

In the end, it depends if key wobble is of utmost important, along with switch stability, which this keyboard excels in, along with robust build quality, with an aluminum alloy top plate and plastic base. The metal helps confer extra rigidity, and there is no noticeable flex whatsoever.

Other nifty features include a one-press Stealth key on F12 that instantly hides all apps and mutes audio if you suddenly need privacy. Fn + Win also activates Game Mode, deactivating the Windows key to avoid accidental key presses while in-game.

The function row is set to media controls by default, but you can toggle to the function commands by hitting Fn + Ins. This provides a quick way to switch between function and media commands as you go between work and play. 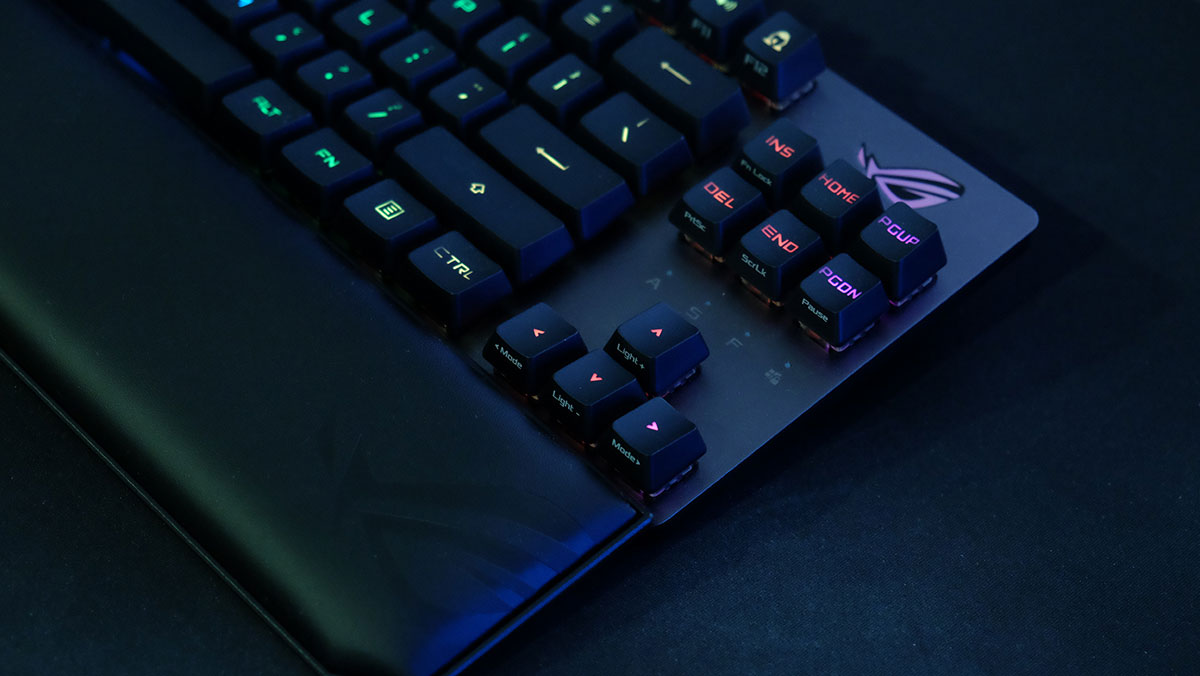 At S$299, ASUS is asking a steep price for all these features. The ROG Strix Scope RX TKL Wireless Deluxe is a premium keyboard with a premium price tag, but it is without a doubt one of the best gaming keyboards available at this price.

Few, if any, of the features feel extraneous, and the keyboard is designed with focused functionality in mind. With three different connectivity options and thoughtful additions like the PBT keycaps and wrist rest, it's difficult to find anything lacking with it. Combine that with the well-designed optical switches, and ASUS has created quite the winner here.

The only downside is the non-standard key layout and switch stem. Many gamers enjoy their custom keycaps, so it's unfortunate they will not have that option here.

But if you can live with the default keycaps, the ROG Strix Scope RX TKL Wireless Deluxe will make you pretty happy. It is available to buy now on both Lazada and Shopee.

ASUS also has wired full-sized edition of this same keyboard going for a lot less, along with the previously reviewed ROG Strix Scope NX TKL if you don't mind losing out on wireless functionality using the NX switches instead.

Write a Review
Compare This | Specifications
Feature-rich, functional design and excellent build quality
Smooth switches with minimal wobble
Versatile connectivity options
Expensive
Non-standard layout and switches mean no support for third-party keycaps
Our articles may contain affiliate links. If you buy through these links, we may earn a small commission.
Sponsored Links