Note: This review was first published on 27 December 2021. 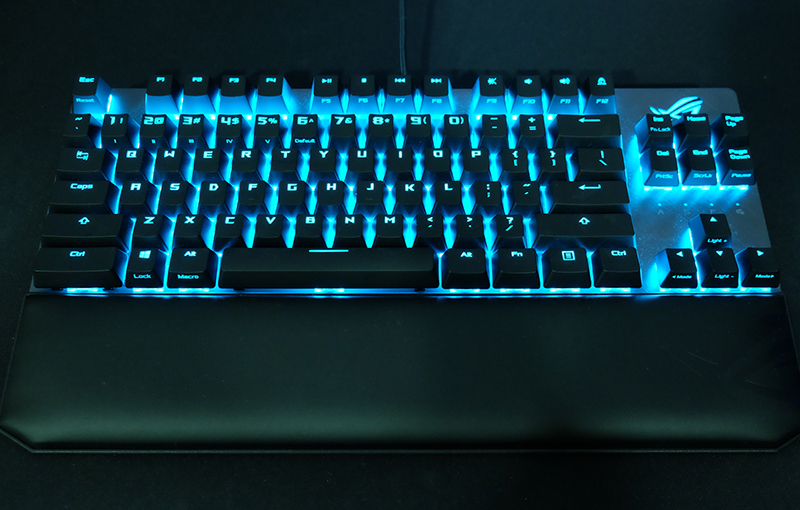 Meet the ASUS ROG Strix Scope NX TKL Deluxe, just one in the sprawling ROG Strix Scope family of keyboards aimed at FPS players. Two things set this particular model apart from its siblings – its exclusive NX switches, made by ASUS itself, and the magnetic wrist rest.

The keyboard sits on a brushed aluminum top plate, which helps add some extra rigidity and durability. There is no flexing or creaking to the board, and its build feels plenty premium. The ROG logo on the top right is illuminated as well, and you can customise the backlighting in the Armoury Crate software. 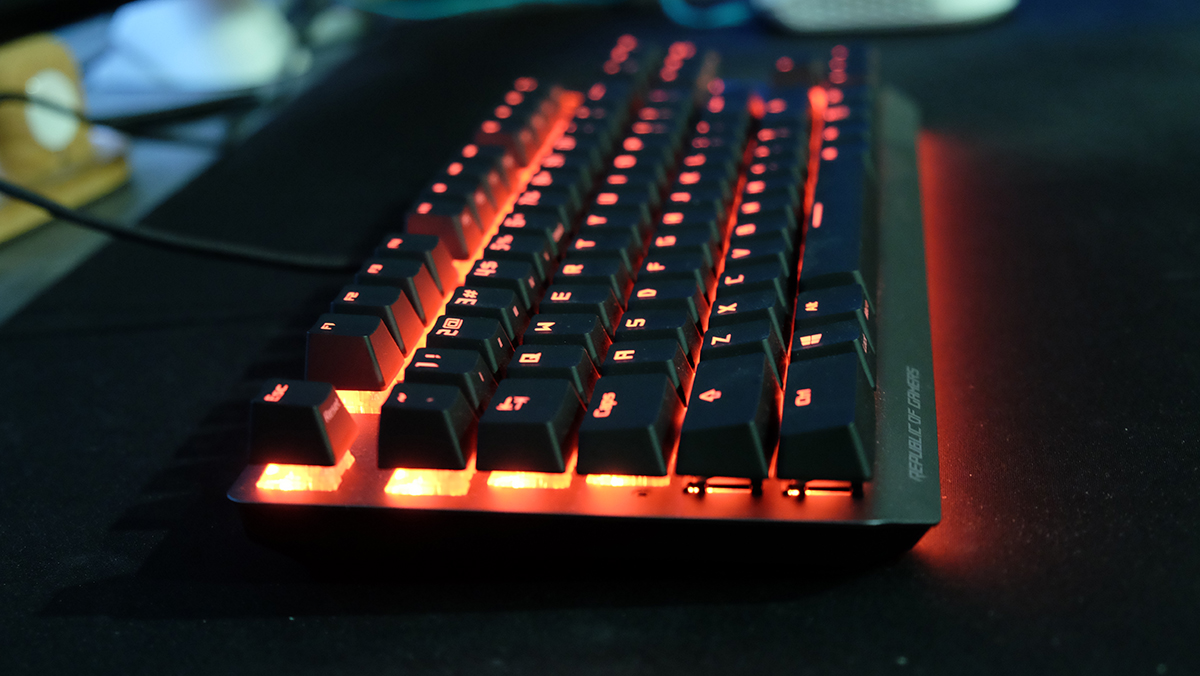 The board puts on quite a stunning visual display when plugged in, with a brilliant lighting strip on the front that adds a neat underglow. I'm not a fan of the font ASUS uses, but it does fit the overall aesthetic of the board. The ROG NX Blue switches feature transparent housings to allow the backlighting to shine through more clearly, and there are helpful side-printed labels as well to show you what each key doubles up as. For instance, the function row is divided between F1 and F4 and media controls, with F5 to F12 printed as secondary legends on the latter.

You can switch between the Function row and media keys by hitting Fn + Ins, which serves as a quick toggle function to change what the function row does. Another useful shortcut is the Stealth key, which instantly hides all your apps and mutes your microphone if you need privacy in a jiffy. 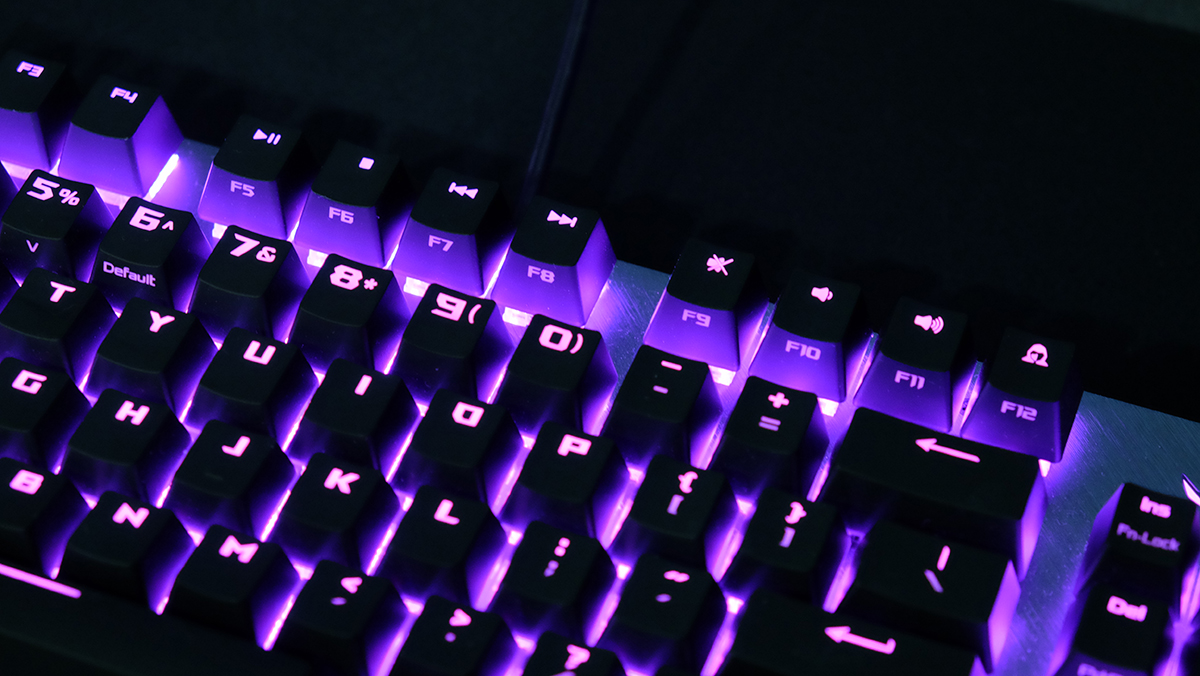 The ROG NX Blue switches are tactile, clicky switches, not unlike Cherry MX Blues. The stem is coloured a lovely baby blue, and the switch has a fairly heavy 65g actuation force. It actuates at 2.3mm, with a reset point at 2.2mm. It looks like ASUS has tried to keep the actuation and reset points as close to each other as possible to still allow for rapid switch presses. One problem with clicky switches is hysteresis, which is the difference between the actuation point and the reset point, and the NX Blues try to mitigate that somewhat. 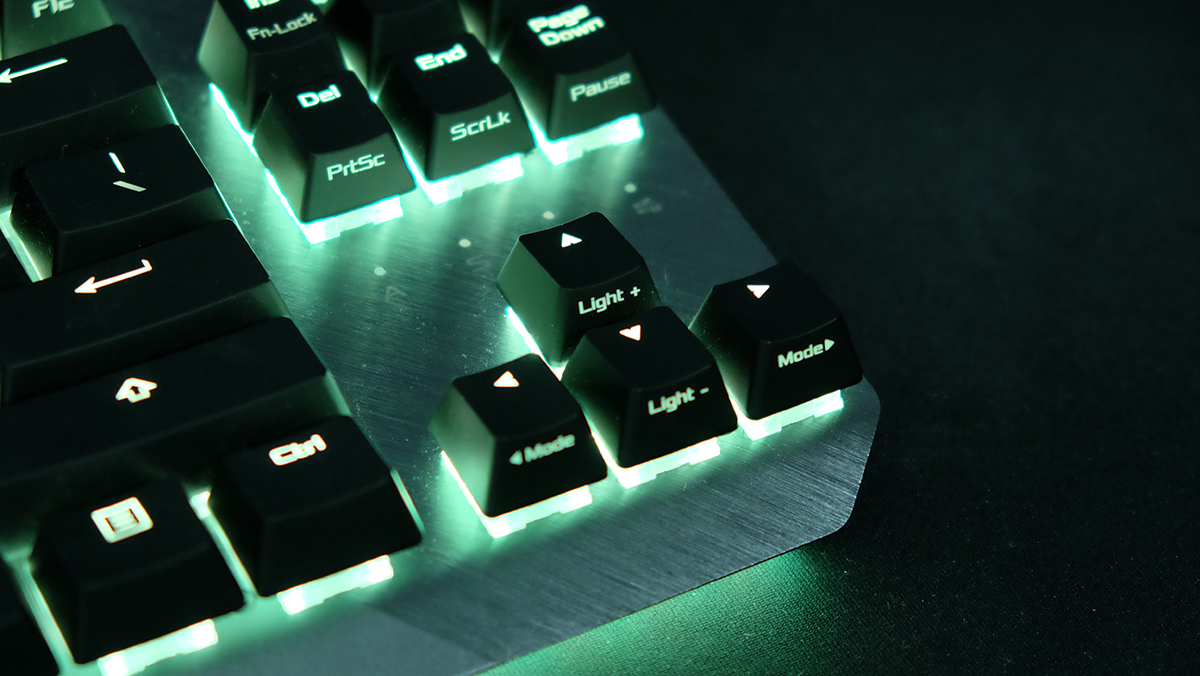 I'd personally still stay away from them for gaming though, and the linear NX Red switches are definitely a better fit. There is also noticeable switch wobble, which could definitely be improved somewhat for a better typing experience. 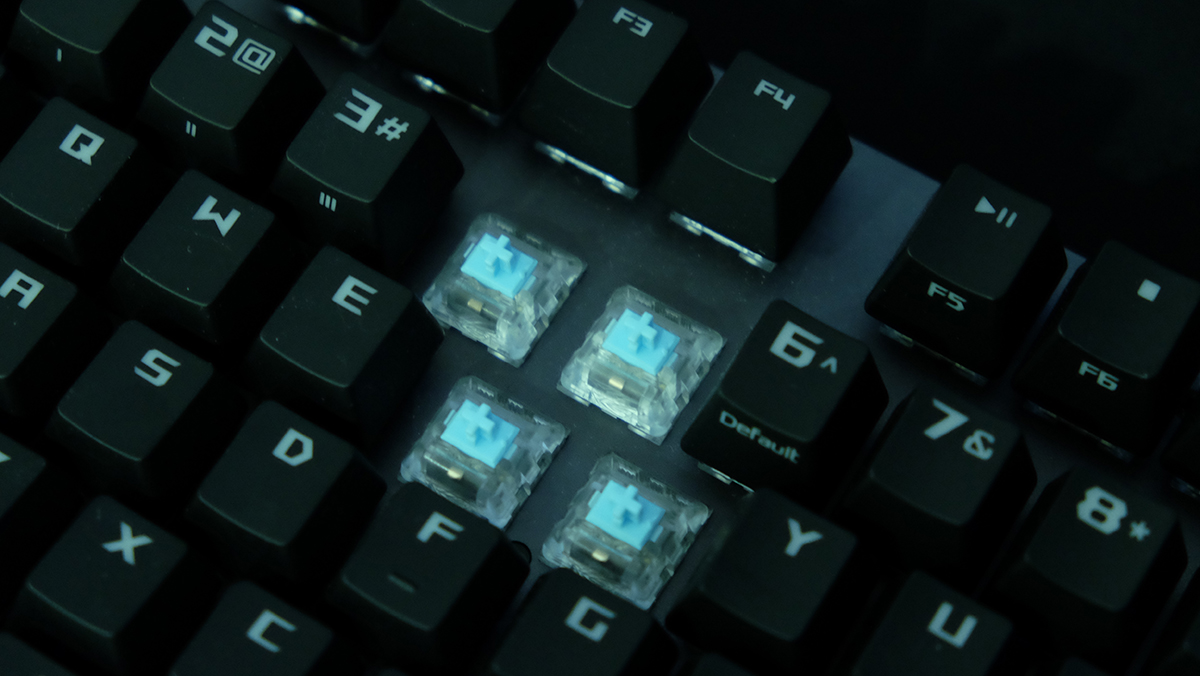 But like the rest of the ROG Strix Scope line, the left Ctrl key is extra large to cater to FPS gamers. That usually corresponds to the crouch function in FPS games, so it should be easier to hit in theory. Having said that, I'm not convinced on the merits of this design, and the non-standard bottom row now means that finding a third-party set of replacement key caps is going to be that much harder. 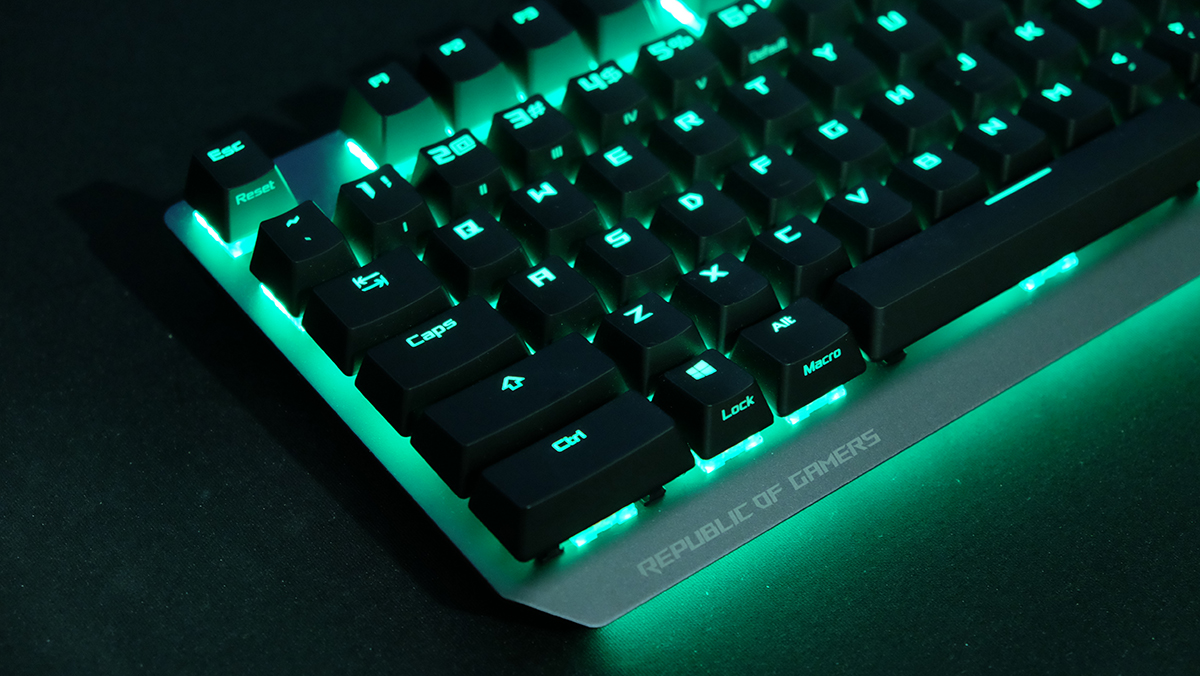 The Armoury Crate software lets you program the individual keys and lighting effects, and you can save up to five custom profiles in the onboard memory. A separate interface in Aura Creator opens even more granular customisations for greater control. 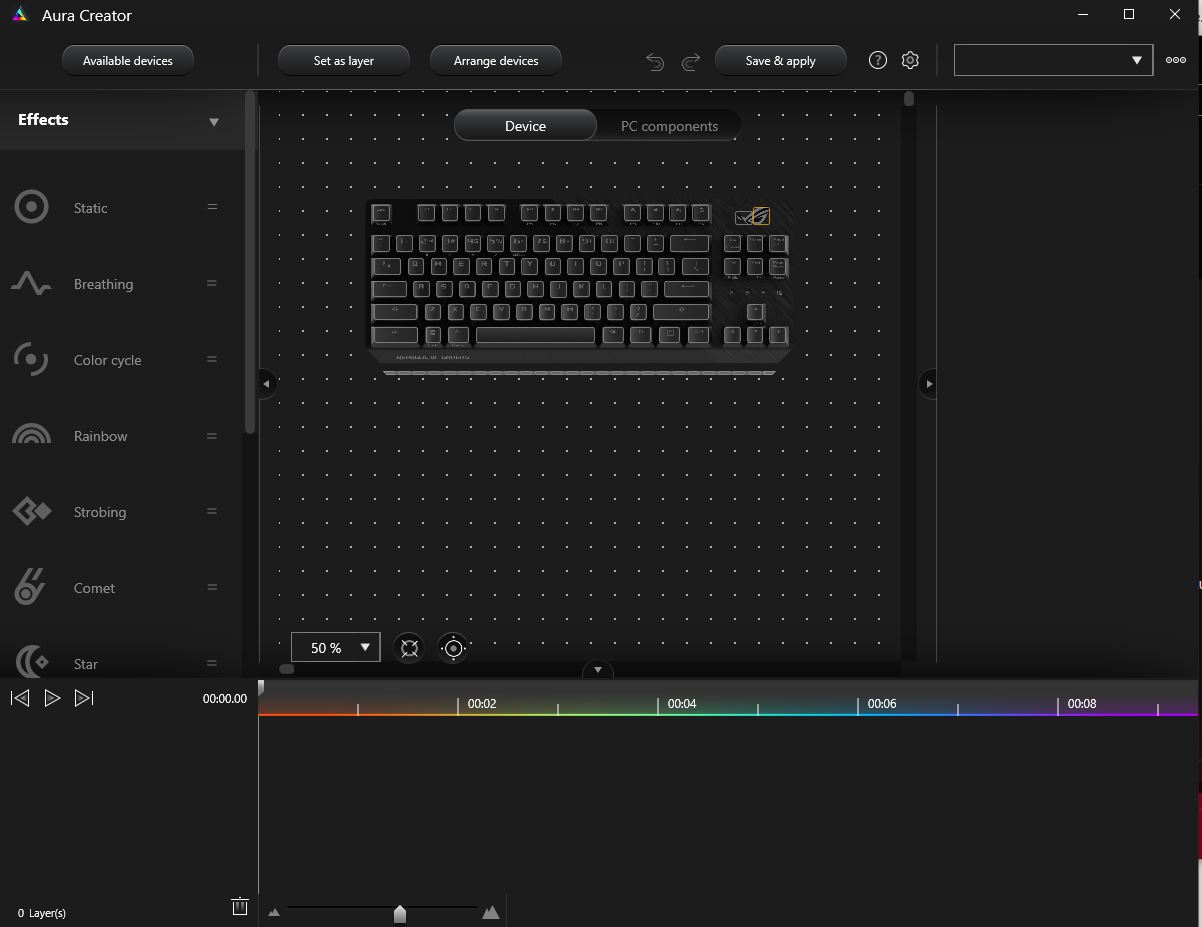 Finally, the magnetic wrist rest snaps on for some welcome support. It's filled with incredibly soft and plush padding and topped with leatherette. However, attaching it hides the front underglow lighting, so it'd have been nice if ASUS included light rails on the sides too. If you need to transport the keyboard, both the wrist rest and cable are easily detachable for a more compact form. The braided USB-C cable slots neatly into a niche at the bottom of the keyboard, but the cable slot also means that most custom cables won't fit. 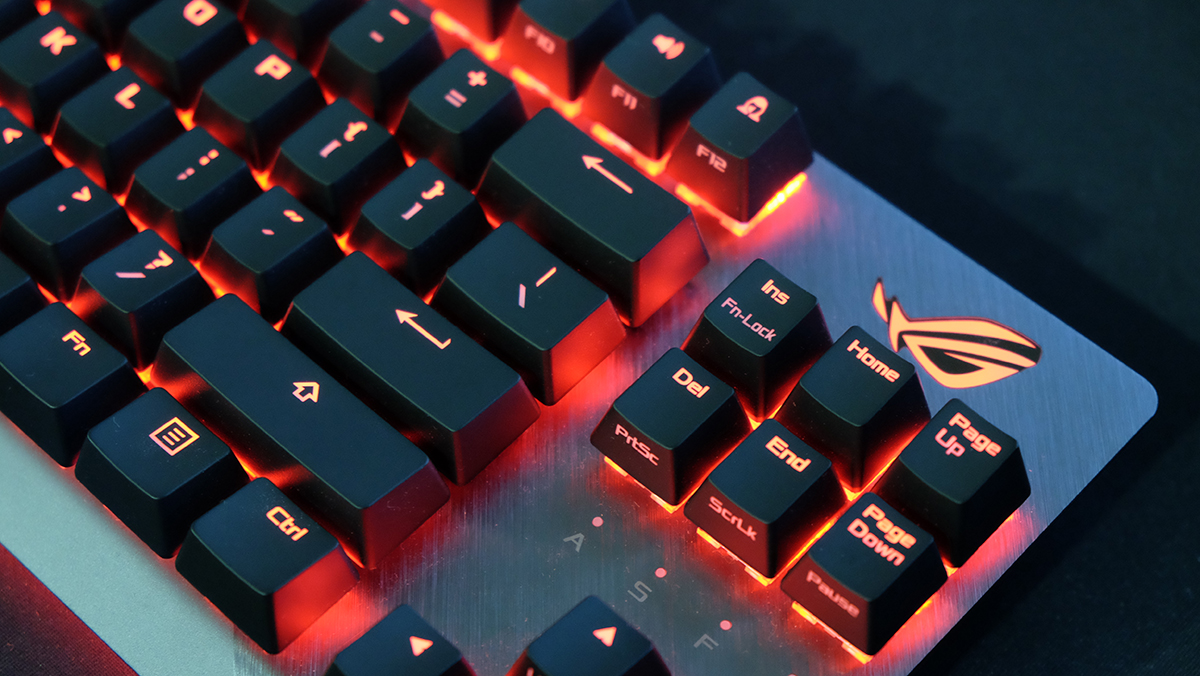 If RGB lighting is a priority for you, the ROG Strix Scope NX TKL will make you pretty happy. The backlighting is bright and even, and the board comes with plenty of features that help make things more convenient for the user, including a Win key lock, media and lighting controls, and a Stealth button.

However, at S$199, it's on the higher end of the price spectrum, despite not doing a lot to meaningfully differentiate itself from the rest of the competition. It nails all the essentials and then some, but the larger Ctrl key is a design quirk that could actually set it back among enthusiasts looking to put their own keycap sets on. There's also no hot-swappable PCB, in case you prefer to personally customise selective keys with a switch type of your preference. But if you already have existing ROG peripherals, the ROG Strix Scope NX TKL is a nice addition that can sync up with the rest of your ecosystem.

More recently, ASUS has carved up another reason to consider the ROG Strix Scope NX TKL thanks to a Moonlight White colour scheme. While it looks really gorgeous in this unique colour scheme, it's also more expensive at S$259. Whichever you fancy, the ASUS brand and design undeniably carries a price tag to match too.