So what's changed from the Scar II? 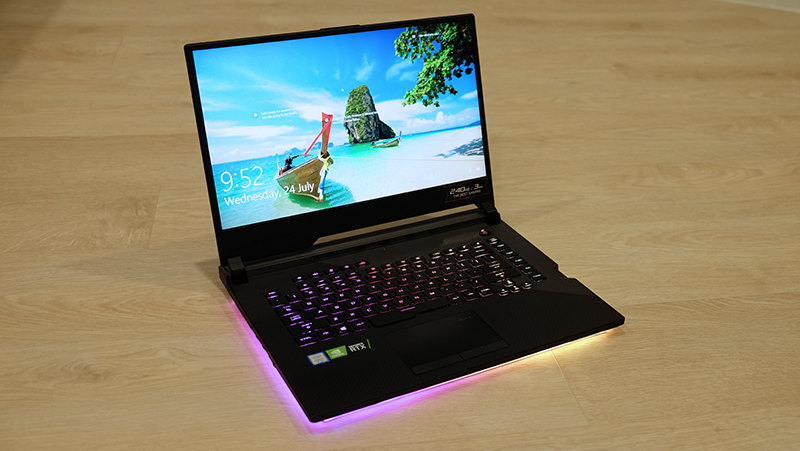 The Scar III's design is a product of a collaboration between ASUS and the BMW Designworks Group, so it looks pretty different from its predecessor, which is a good thing. The cheap-looking camouflage pattern has been replaced by a carbon fiber print, and a portion of the bottom bezel has been sliced off. While the laptop has gleefully thin bezels on three sides, it still has a really chunky bottom bezel, but that impression is somewhat softened by the gap between the base and the bezel.

According to ASUS, the asymmetrical cut also further facilitates airflow when the laptop is in use.

Elsewhere, the base is framed by a series of raised ridges that correspond to the ventilation areas on the notebook. These also echo the design of the company's Face Off concept notebook, but I'm not sure they do much for the overall look of the laptop. If anything, they're pretty distinctive, so you'll be able to recognize the Scar III easily. 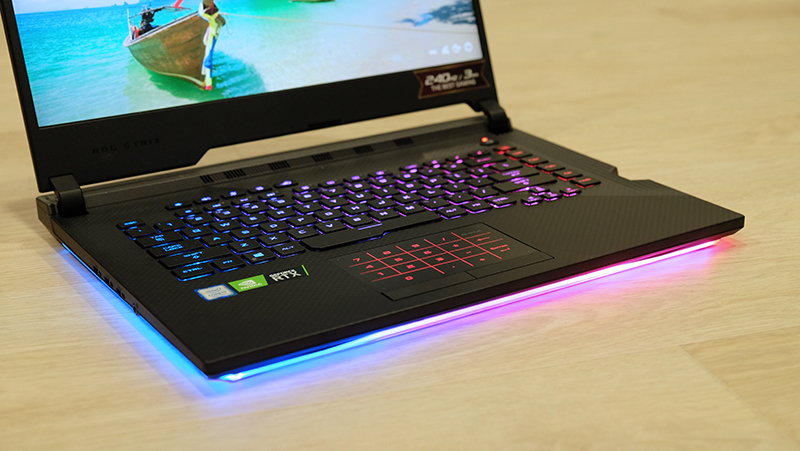 Finally, the Scar III now comes with a wraparound light bar. This is sort of an evolution of the Scar II's design, where it had a shorter light bar that was limited to the notebook's front edge. The laptop is now rimmed with LEDs on three sides, which makes for quite a stunning underflow effect when you turn the lights off. Still, if that's not your thing, you can always turn them off.

Is there anything special about it?

One unique feature is something ASUS calls the Keystone. This is an NFC-enabled key that fits into a dedicated niche on the Scar III's right side. When slotted in, it adds a translucent orange accent to the laptop, but the main point of the Keystone is to give you secure access to an encrypted Shadow Drive and various game-specific profiles or lighting effects. This is not unlike what we saw on the ROG GT51CA desktop, which used a wearable NFC band to unlock its hidden drive. 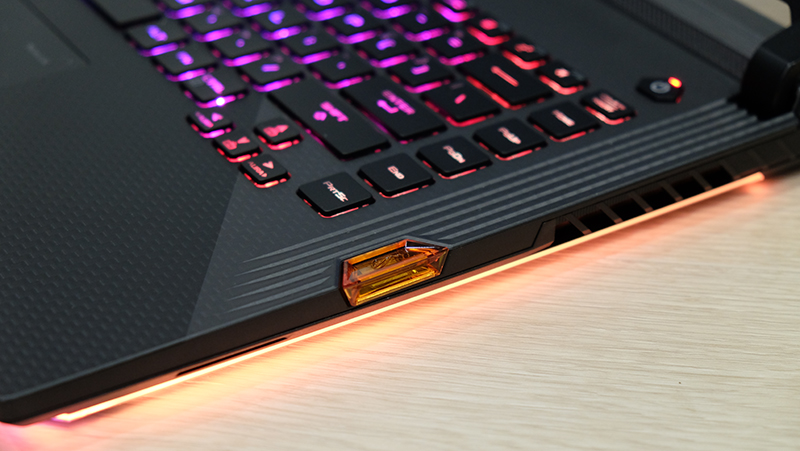 When you first install it, you'll be prompted to pair the Keystone with your laptop, after which you can customize your profile in the Armoury Crate software. Your settings will then load every time you insert the Keystone, and switch back to default once it's removed. Unfortunately, Shadow Drive encryption requires Windows 10 Pro, but local units only ship with Windows 10 Home.

If you have multiple Keystones, you could also technically use different ones for different settings. I could see the Keystone being pretty useful for some people, but it still doesn't feel like something the average user would really benefit from.

The other unique selling point of the Scar III is that it is supposedly designed for FPS players. I've always been skeptical about this claim, since there's not a lot you can do to make a gaming laptop specifically better for FPS games, short of additions like accented WASD keys and a high refresh rate screen. But all games could benefit from a 144Hz or 240Hz display, and gaming laptops within a certain class pretty much use all the same hardware anyway. 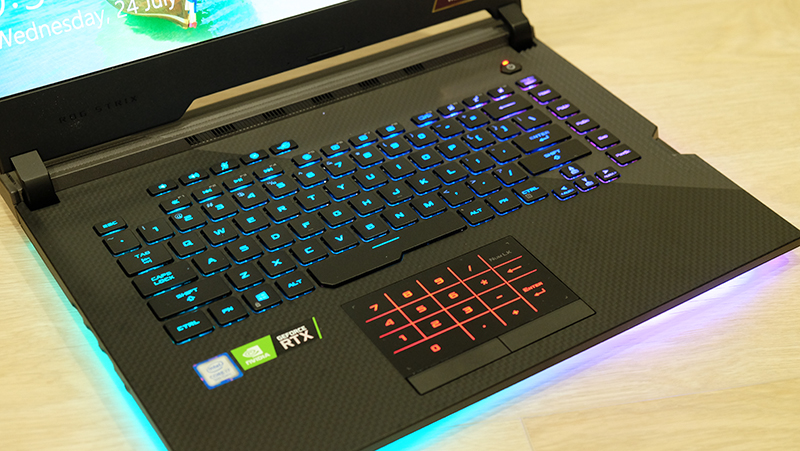 Still, ASUS is trying anyway, and you'll find an asymmetrical spacebar that's wider on the left, so hey, you'll never miss hitting the largest key on your keyboard ever again. There's also a tiny homing bump on the 'W' key to help you find your movement cluster without having to look.

On the software front, it comes with Sonic Radar III, which you might recognize from ASUS' ROG motherboards. This adds a radar overlay to your game and translates in-game audio to visual cues, so you can tell which direction gunfire is coming from. Unless you're hearing-impaired, I honestly can't see any self-respecting FPS player using this. It sounds useful in theory, but some games already have a mini-map that gives you an idea of enemy locations. And if your enemy is on the other side of the wall, I'm not sure you'll have time to even look at the radar overlay.

How are the display, keyboard, and speakers?

The FHD 240Hz display is super responsive and bright. It's excellent by the standards of gaming laptops today, and colors were vivid and really popped. You'll have no problems using this under bright overhead lighting, and the matte coating is pretty nice too. The 240Hz refresh rate is great, but no consumer card today can actually make full use of it, let alone the GeForce RTX 2070. Still, it's a nice-to-have feature, and if there's anything that helps in FPS games, it's definitely a high refresh rate. 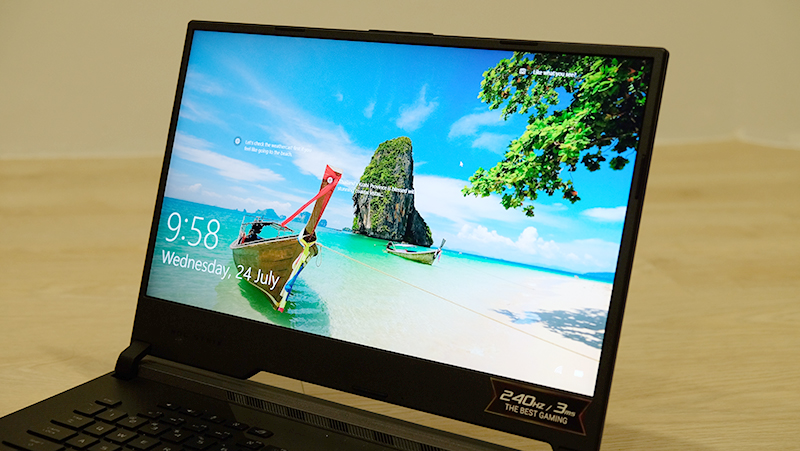 ASUS has also done away with an integrated webcam entirely this time. That's partly because of how thin the top bezel is, and it's instead opting to bundle a more capable external GC21 webcam that is capable of 1080p60 capture. This is not entirely a bad idea. I don't think many people actually use their webcams these days, and if you do, you get a better unit now. 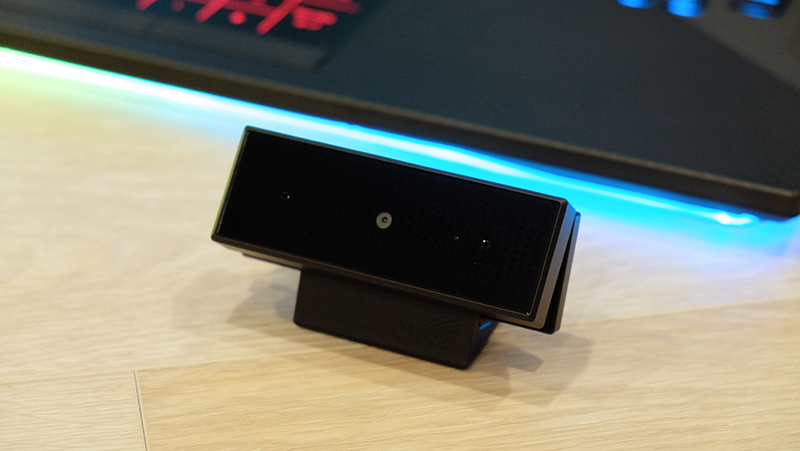 The keyboard supports per-key RGB lighting and offers decent key travel and feedback. ASUS says it also moved the actuation point on each key higher to enable faster inputs, in addition to implementing full N-key rollover. I don't think the higher actuation point translates into a tangible advantage in game, so this is really one of those things that you know are there but won't really feel. I do like the dedicated hot keys though, which give you quick access to volume controls, microphone mute, different performance modes, and the Armoury Crate software. The microphone mute button is particularly useful, since you never know when you might need to step away from Discord for a second. 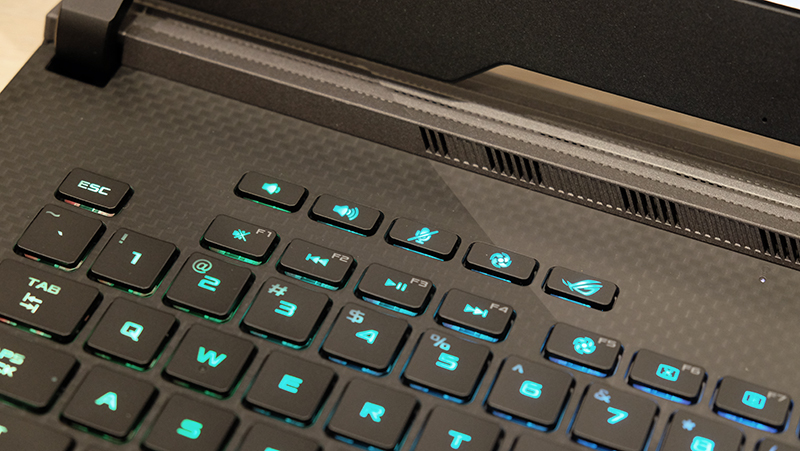 The Windows Precision Touchpad also has an integrated digital number pad that you can manually toggle on and off. That's similar to what ASUS does on its Zephyrus S notebooks, and it's quite a neat way to maintain number pad functionality.

The dual 4W speakers are more than loud enough, but they could use better clarity as it generally sounded like there was a veil over the sound. The low-end could also use a little boost, but they're overall decent for laptop speakers.

The laptop offers a pretty decent selection of ports, comprising one USB 3.1 (Gen 2) Type-C, three USB 3.1 (Gen 1) Type-A, one HDMI 2.0b output, and one RJ-45 jack. The USB-C port supports DisplayPort 1.4 as well, so you can also plug in an external display there. 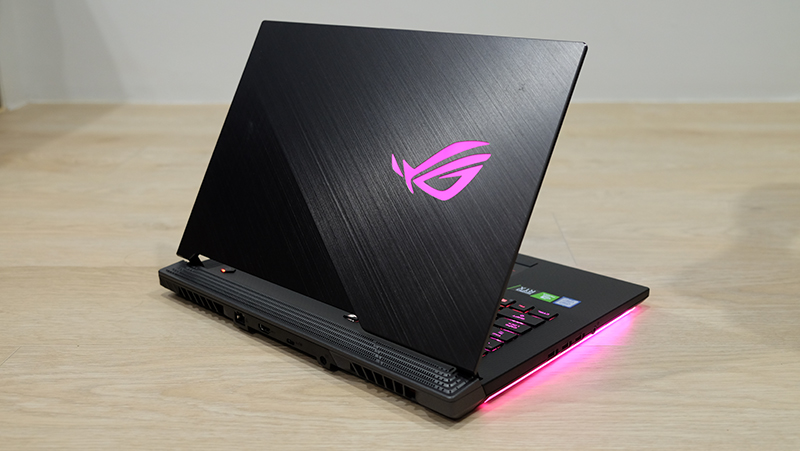 The power connector is located at the rear, although its placement between the rear ports and exhaust vents mean that the cable might end up blocking one or the other. There are also zero ports located on the right. This means that if you're using a wired mouse, your cable would need to loop all the way around the back of the laptop from one of the Type-A ports on the left. This feels a little cumbersome to me, and I think ASUS should have included one Type-A port on the back at least. 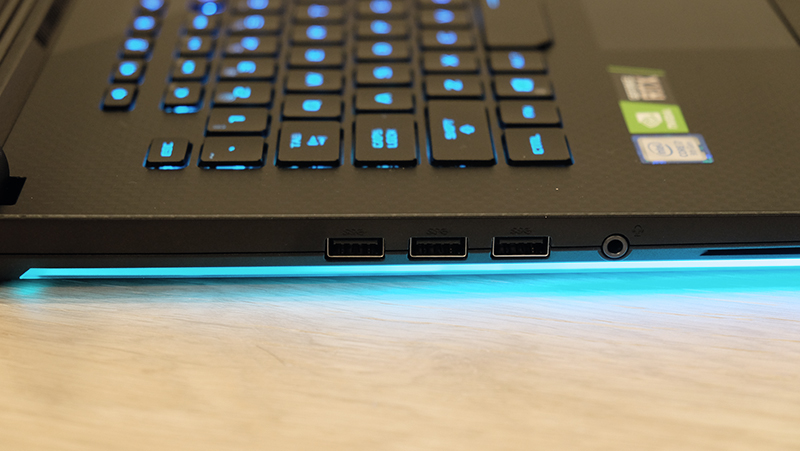 So far so good,but what's the catch?

Well, I'm glad you asked. The Scar III only comes equipped with a single 16GB stick of memory, which immediately halves the available memory bandwidth and is a huge drag on performance. As you'll see on the next page, that means a performance deficit of over 20 percent in some games compared to similarly configured notebooks.

Single-channel memory is simply a no-go these days, and even though ASUS' rationale is that it wants to leave an additional slot available for users to upgrade, I certainly don't want to have to buy a notebook knowing that I still have to buy something extra to unlock its full potential. And we're not even talking about a few percentage points here. With just single-channel memory, you're pretty much not getting your money's worth in terms of performance. 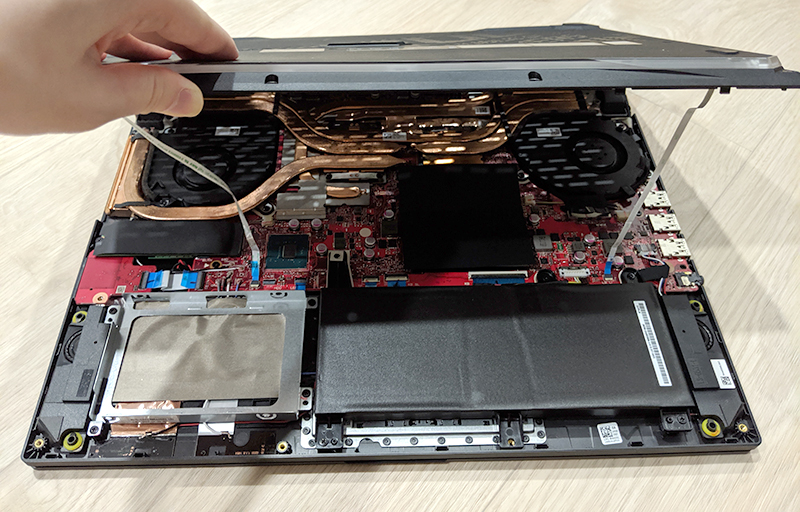 To be fair, this is supposedly a fault with how the game or application manages system memory. All GeForce RTX systems that use MS Hybrid, which is Microsoft's implementation of NVIDIA's Optimus technology, are reportedly affected.

But regardless of whose fault it is, I'm not a fan of the assumption that users will generally be comfortable with buying an additional stick of RAM and installing themselves. It's true that ASUS has made the upgrade process relatively hassle-free – just unscrew the bottom panel and it pops right off to reveal the DIMM slots – but there's still the issue of sourcing for a single stick of RAM. I want my notebook to run at its best right out-of-the-box, and I don't think that's an unreasonable expectation here.

Write a Review
Compare This | Specifications
Good build quality
240Hz IPS display is bright and vivid
Easily accessible DIMM slots and storage bay
Single-channel memory comes with a massive performance hit
Not a Max-Q notebook, so chassis is rather thick and heavy
Mediocre battery life
Our articles may contain affiliate links. If you buy through these links, we may earn a small commission.
Sponsored Links