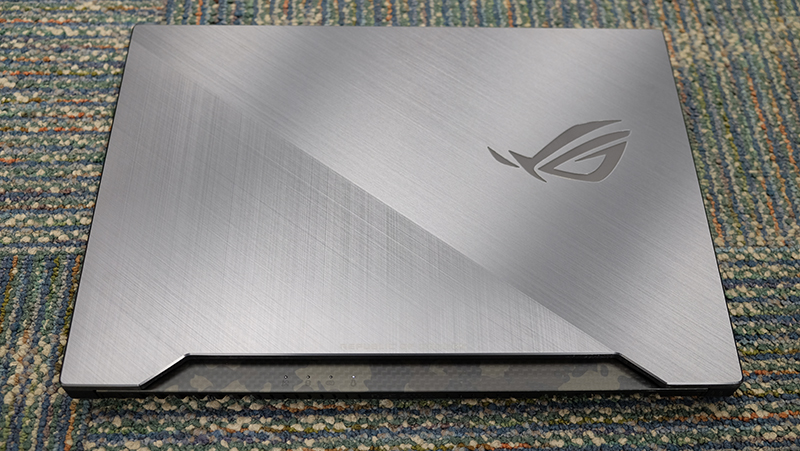 By most measures, the ROG Strix Scar II GL504GS is a great laptop. It’s fast, well-built, and has a great display, speaker system, keyboard and touchpad.

At 2.4kg and 26.1mm thick, the notebook is a little heavier and chunkier than the recent slew of slim and light laptops. However, it isn’t ridiculously bulky either, and actually slots into a niche between the Max-Q laptops and a full-fledged desktop replacement. It won’t be the most fun to lug around, but it’s definitely doable.

However, the lack of Max-Q optimizations also means that battery life isn’t great compared to the competition. You’ll never be able to stray too far from a power outlet, and the and gratuitous camo means that this is probably not a system that you’ll want to double as your work machine.

However, the Scar II’s FPS-focused branding could puzzle some folks. The Hero II shares very similar specifications, down to the 144Hz IPS-type display with a 3ms response time, and the main difference is that it can only be equipped with up to an NVIDIA GeForce GTX 1060 6GB. In addition, the Scar II supports larger 256GB PCIe SSD. The QWER key cluster is also highlighted on the Hero II’s keyboard, but that’s a superficial difference.

Do MOBA players need a less powerful GPU and less storage? I suppose, if you’re talking about games like Dota 2 and League of Legends, but the fact remains that they could benefit from a more powerful card anyway.

Put simply, other than the highlighted WASD key cluster and awful camo, the Scar II offers little else to justify its branding as an FPS-focused laptop. The 144Hz display is probably the strongest point it could make, but the MOBA-oriented Hero II offers that as well, and I’d argue that all game genres can benefit from a high refresh rate.

The Scar II and Hero II marketing may not amount to much for those who know what they are looking to get. Instead, this differentiated marketing effort by ASUS is their way to offer a quick product recommendation for gamers who don't necessarily want to pore through the spec details, but can easily identify themselves with the marketing alignment.

Branding matters aside, there’s no doubt that the Scar II is a very capable machine. The biggest question then is whether or not you should get this over a Max-Q laptop. If you ask me, it all comes down to price and whether you value mobility or raw performance more.

At S$3,398, the Scar II is much cheaper than the S$3,899 Razer Blade and S$3,799 Gigabyte Aero 15X. It’s roughly 10 per cent faster too, although your mileage may vary according to the game you’re playing. However, for a tiny performance trade-off, a Max-Q laptop could offer you considerably better battery life and a slimmer and lighter design - if you don't mind forking out another S$500, which is no small sum.

Ultimately, if you’re not looking for a laptop that can double as both a gaming system and a portable work machine, the Scar II is a great choice.

Otherwise, you’re probably better off considering one of the Max-Q laptops on the market, but be prepared to pay even more. ASUS too has a great alternative for those can spend more and that's with their Zepherus M.