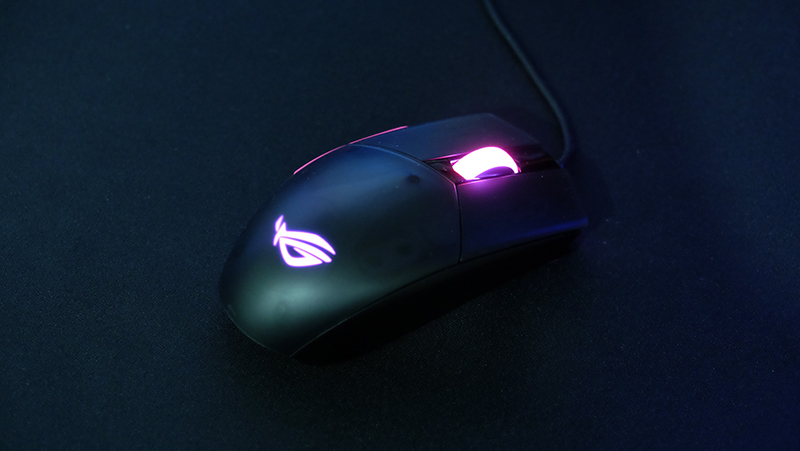 ASUS has released a new Electro Punk line of black-and-pink gaming peripherals, adding a fresh pop of colour to its traditionally black-and-red colour scheme. The company describes this as a cyberpunk-inspired line decked out in neon pink, but despite the cyberpunk references, there's no relation to the upcoming Cyberpunk 2077 game that has seen multiple tie-ups with various brands.

The ASUS ROG Strix Impact II Electro Punk takes its place among other cyberpunk-themed peripherals, including a keyboard, wireless gaming headset, and mousepad. You'll be able to create an entire setup around this theme, if you feel so inclined. However, ASUS has basically given a fresh coat of paint to its existing peripherals, so don't expect anything groundbreaking.

The colour aside, the ROG Strix Impact II Electro Punk is identical to its non-Electro Punk counterpart. At S$109, it is a bit more expensive than many of the excellent, ultra-light mice out there, such as the Razer Viper Mini, Glorious Model O-, and Cooler Master MM710. It is going up against stiff competition, and it's not immediately clear that it brings anything to the table that will help it stand out from the crowd. 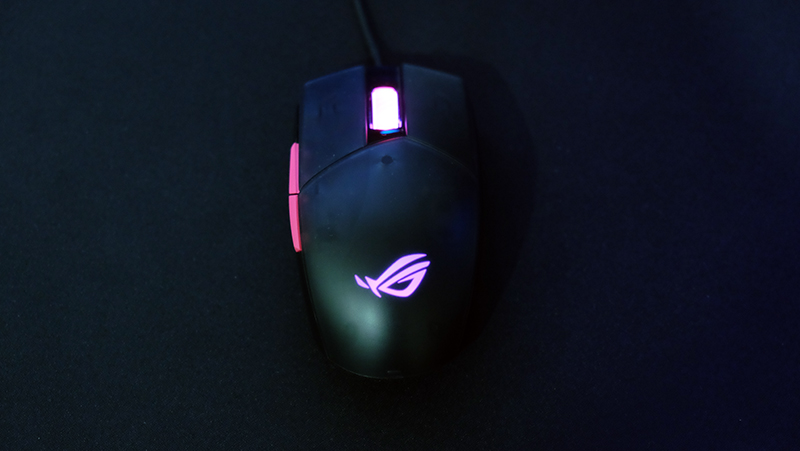 This is a small-ish mouse with an ambidextrous shape, measuring just 120 x 62.5 x 39.5mm. However, it features two neon pink side buttons on the left, which means its really designed for right-handers. Its shape reminds me of a slightly larger Logitech G Pro gaming mouse – it has a relatively flat hump situated toward the rear. This is a pretty versatile shape that makes it comfortable for all manner of grip styles.

The mouse's shell is a vaguely translucent plastic, which offers a hazy peek at its innards. Unfortunately, this isn't as cool as it sounds – you can see the outline of the switches beneath the mouse buttons and some of the other parts, but that makes the mouse look cheap rather than futuristic. I'm also not a fan of the lighting implementation. The entire scroll wheel is illuminated, but the lighting is not completely even and is dimmer toward the front of the wheel, which again doesn't convey an impression of quality. Elsewhere, the ROG logo on the mouse is backlit as well, but the lighting has a soft and fuzzy effect to it that doesn't look great. At 79g, the ROG Strix Impact II Electro Punk doesn't really threaten any of the ultra-light mice available today. It's a decent weight that I was able to get used to pretty quickly, but it is noticeably clumsier in hand than something under 70g. It's difficult to go back to a heavier mouse once you've gotten used to a super light one, and it's difficult to replicate the same feeling of nimbleness and agility. The stock mouse feet on the ASUS mouse also aren't the best, and they somehow manage to feel kind of sluggish with the Fnatic Dash mousepad, which is one of the fastest cloth pads around.

The rubber cable is relatively flexible and soft, a huge improvement over the stiff braided cables of old, but it still isn't quite as good as the paracord-style cables on many mice today. There's minimal side-to-side wobble on the left- and right-click buttons, which is a good sign, but the buttons don't feel as crisp as I'd like. This may be a personal preference though, as I generally favour stiffer switches with clearer feedback. In comparison, the feel of the switches on the ASUS mouse appear to be deliberate. ASUS says it has used something called a pivoted button mechanism, which provides shorter travel for faster clicks. It comprises springs and metal hinges to balance the keys and minimise the distance between the buttons and switches, which allows for minimal travel and quicker return for improved responsiveness.

The side buttons are well-placed and easy to access. They feel nice and springy, and I have no complaints about them. One unique feature is the push-fit switch sockets, which makes it easier to swap out and install your preferred switches. There are four rubber pads at the bottom that you can remove to expose the screws holding the shell together. Take out the bottom screws to lift up the mouse cover and reveal the switches. You'll then be able to pull out the existing ones and drop in a different Omron D2F or D2FC series switch without any soldering required. This gives you the freedom to switch to a stiffer or lighter switch to suit your preferences and also allows for easier replacement if you encounter pesky double-clicking issues. The switch sockets aside, I like that the screws aren't located under the mouse feet, so you don't have to peel them off and potentially ruin them if you want to modify the mouse.

This is a valuable addition to have, and as someone who is really particular about how the clicks on my mouse feel, I'd like to see this option on more mice. 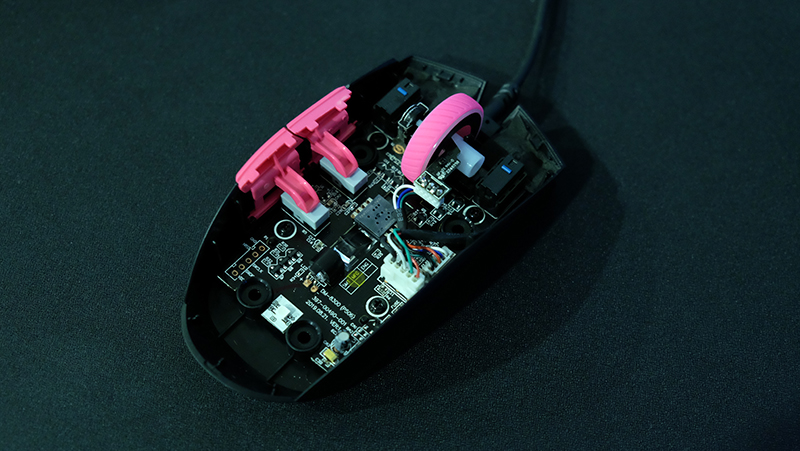 That said, the scroll wheel on the mouse could use more clearly defined notches, and it's also a little on the noisy side when scrolling quickly.

Finally, the sensor is a 6,200 DPI PixArt PMW3327 optical sensor, which tracks up to 220 IPS with 30G maximum acceleration. While I didn't observe any issue with tracking, acceleration or spinning out, this is not a sensor I expect to find on a mouse that costs over a hundred dollars. I'd much rather have seen a PMW 3360 or PMW 3389 here.

You can switch between 400, 800, 1,600, and 3,200DPI using the button at the bottom of the mouse or customise the DPI sensitivity in the Armoury Crate software. 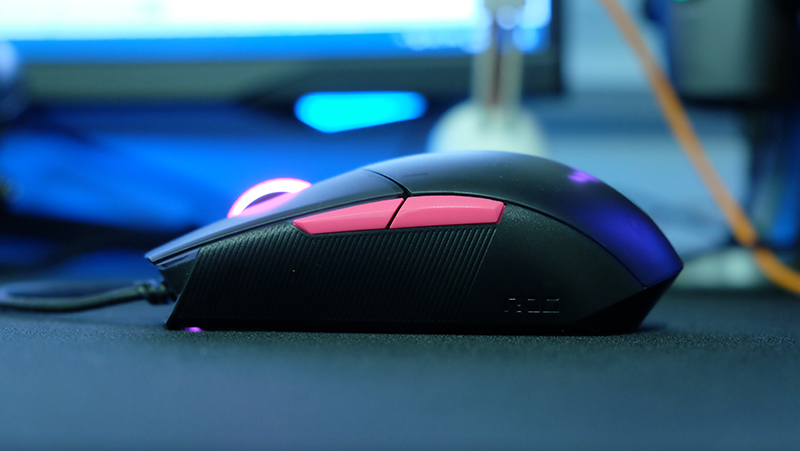 The ASUS ROG Strix Impact II Electro Punk is a questionable rehash of the ROG Strix Impact II it is based on. They are both the exact same mouse, but the Electro Punk version has neon pink side buttons and a scroll wheel. However, this simply doesn't feel like a mouse that costs S$109. Build, design and specifications feel lacklustre, and it is also not super competitive when it comes to the sub-par mouse feet, 79g weight, and lack of a paracord cable.

The best thing about the mouse is the push-fit switch sockets, which let you easily swap out the switches, but other than that, the ROG Strix Impact II Electro Punk fails to impress. You'd be better off spending that money, and saving some of it in the process, on something like the Razer Viper Mini. Don't get me wrong –this mouse is perfectly serviceable. If it was more affordable, it'd be easier to recommend, but there are simply lighter, better, cheaper and better built mice available. For the price, the ROG Strix Impact II Electro Punk just doesn't cut it, unless the hot pink accents are a must-have for you.

Write a Review
Compare This | Specifications
Push-fit sockets allow you to easily swap out the switches
Disassembling the mouse doesn't require you to remove the mouse feet
Comfortable and versatile shape
No paracord-style cable
Relatively heavy
Sensor isn't as competent as the one on more affordable mice
Design and build quality feel cheap
Our articles may contain affiliate links. If you buy through these links, we may earn a small commission.
Sponsored Links