The ROG Strix GL702ZC will find itself going up against laptops equipped with Intel processors and NVIDIA graphics, most notably the Intel Core i7-7700HQ and NVIDIA GeForce GTX 1060 6GB.

To give you a better idea of how this AMD-powered notebook compares against NVIDIA’s product stack, I’ve included laptops powered by the NVIDIA GeForce GTX 1050 Ti to GeForce GTX 1070 Max-Q.

You can expect the Radeon RX 580 to sit somewhere between the NVIDIA GeForce GTX 1060 and 1070 Max-Q, and the results show as much.

All the laptops were put through the following benchmarks:

We used the 3DMark Fire Strike Extreme Stress Test for temperature measurements, and the battery life benchmark in PCMark 8 Home to test the battery (PCMark 10 doesn’t yet come with a built-in battery benchmark).

Despite its 8-core CPU, the ROG Strix GL702ZC fell right in the middle of the pack. In fact, the MSI laptop took the lead in terms of overall scores, largely thanks to the stronger gaming performance afforded by its NVIDIA GeForce GTX 1070 Max-Q GPU.

PCMark 10 may not be the best way to bring out the multi-threaded prowess of the Ryzen 7 1700, but it does show that many applications today still don’t benefit from that many threads. 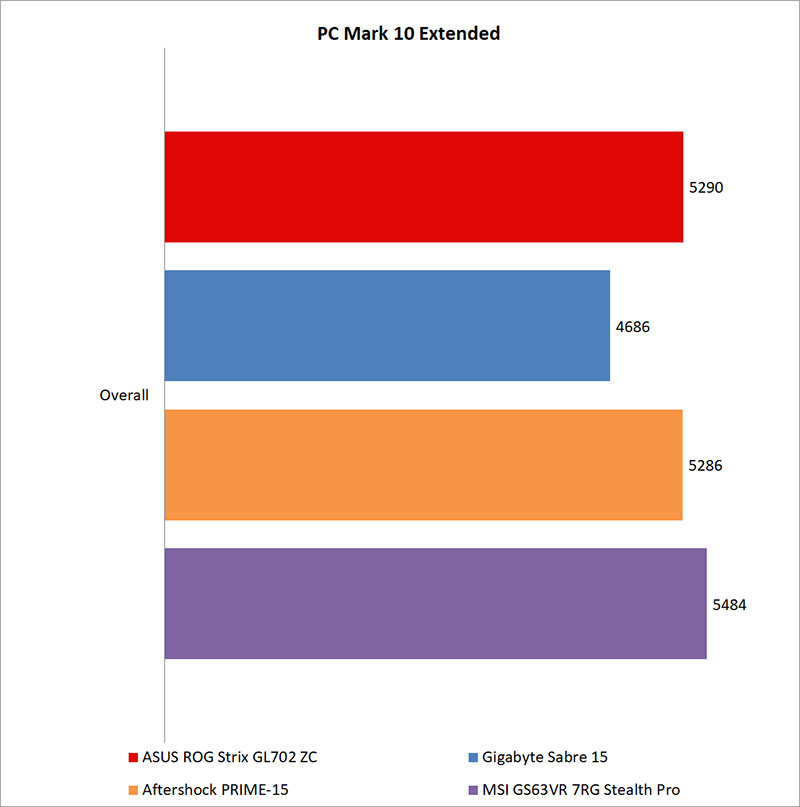 3DMark looks explicitly at gaming performance, and it puts systems through a range of graphics and computational performance tests at different resolutions, starting at 1080p and going all the way up to 4K.

Unfortunately, the Ryzen 7 1700 and Radeon RX 580 4GB combination don’t seem very potent in terms of graphics performance either, where it was just over seven per cent slower than the Aftershock PRIME-15 and its GeForce GTX 1060 6GB.

The gap narrowed in the more CPU-intensive Time Spy benchmark, but the fact remains that most games today are still primarily GPU-bound. Futuremark’s VRMark benchmark is designed to assess a PC’s ability to handle high-performance headsets like the HTC Vive and Oculus Rift. If a PC passes the Orange Room test, it is ready for the latter two systems. The second graph shows how the VRMark score translates into FPS, where 109FPS is the passing mark.

The good news is that the ROG Strix laptop held its ground here, although it was still slightly behind the Aftershock and MSI notebooks. 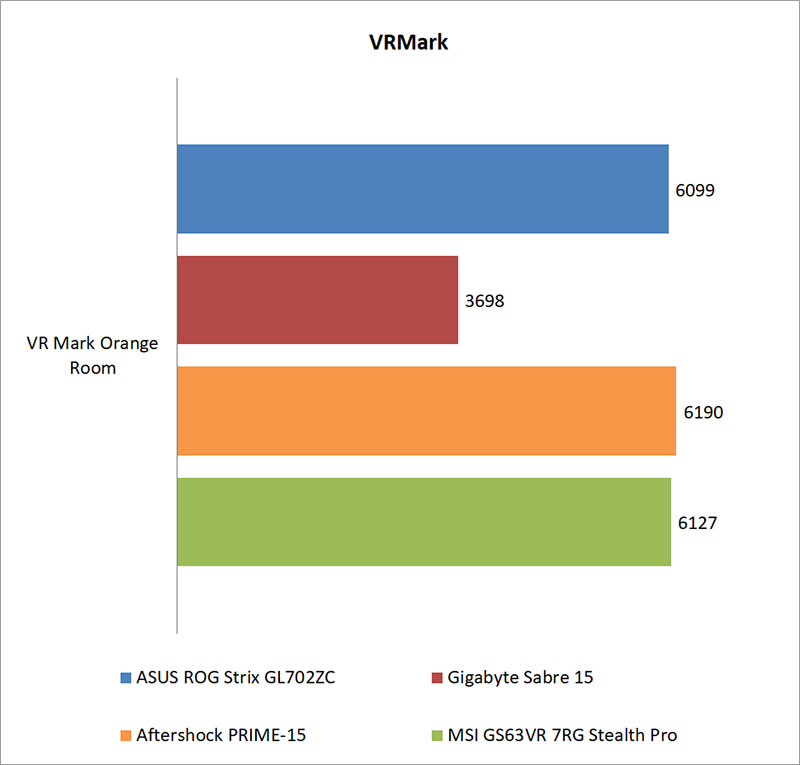 Note: The Gigabyte Sabre 15 won’t run the game in DirectX 12 mode, which is why there aren’t any figures for it in the relevant graph.

Ashes of the Singularity is a demanding real-time strategy game that puts thousands of units on screen, and it’s capable of pushing even the most powerful GPUs. However, it’s also rather limited by the CPU at lower resolutions and settings, a rare instance of a CPU-bound game.

The ASUS laptop did rather poorly here, and the Aftershock PRIME-15 was a whopping 64 per cent faster at High settings (DirectX 11). The latter also outdid the MSI GS63VR 7RG by around 19 per cent, despite the MSI laptop having a more powerful GeForce GTX 1070 Max-Q GPU.

However, it’s important to note that this is an outlier of sorts, and most games don’t show any significant benefit from moving over to dual-channel memory, even if it is better in theory.

But once you turn up the settings and shift toward a more GPU-limiting scenario, this bias toward dual-channel memory isn’t as prevalent. For instance, the MSI notebook took the lead over the Aftershock at Crazy settings.

That said, the ASUS ROG Strix GL702ZC still lagged behind, and the Aftershock PRIME-15 was still 39 per cent faster. 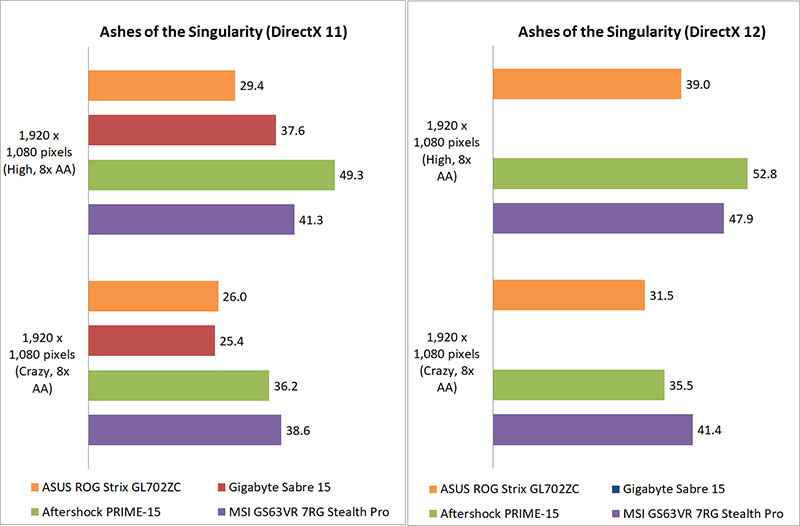 Mankind Divided is one of the most demanding titles to run today, and it’s capable of pushing even the most powerful of cards.

The ROG Strix GL702ZC did better here, tying the Aftershock PRIME-15 and its GeForce GTX 1060 6GB for the most part in DirectX 11, and outstripping it in DirectX 12. The ASUS laptop was 25 per cent quicker than the Aftershock at High settings in DirectX 12, and it also managed to inch ahead of the MSI notebook.

AMD’s hardware is clearly better at taking advantage of DirectX 12 than the Intel/NVIDIA combination in the case, and it helps make up for the shortcomings in DirectX 11.

The ASUS and Aftershock laptops were once again effectively tied, and at this point in time, it’s difficult to say that the ROG Strix notebook has any significant advantage over an equivalent GeForce GTX 1060 6GB laptop in terms of gaming performance.