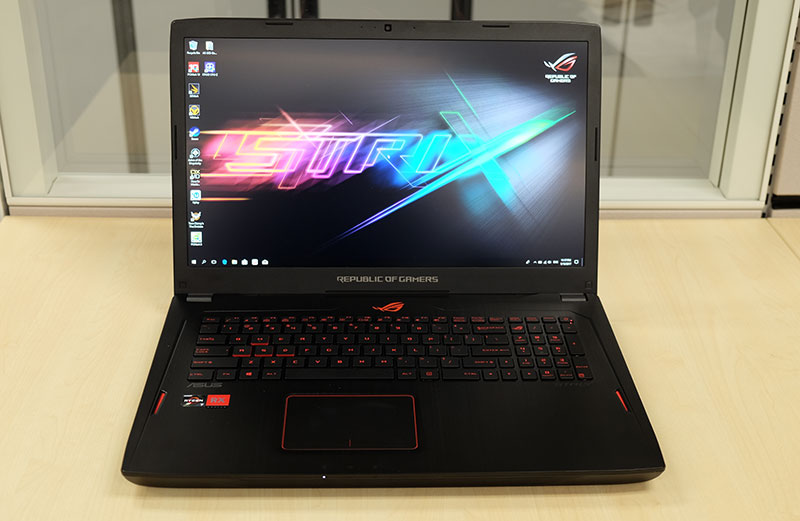 A laptop powered by AMD’s well-received Ryzen desktop processors and the Radeon RX 580 sounds really interesting. When you’ve had years and years of both Intel and NVIDIA providing the CPUs and GPUs that go into all gaming laptops, any break from the status quo feels like a breath of fresh air.

The status quo is indeed changing in the desktop space; Intel is no longer the obvious choice for content creators, gamers, and streamers who need strong multi-threaded performance. Santa Clara is still very competitive, but it’s no longer the only horse in the race.

As a result, it only seems fitting that we’re seeing a similar broadening of horizons in the laptop segment. As the first laptop to feature a desktop Ryzen 7 1700 processor and a Radeon RX 580 4GB GPU, the ASUS ROG Strix GL702ZC appears poised to rattle a few cages.

That said, as I mentioned earlier, it’s not immediately clear that this is the best idea for a gaming laptop, especially given Ryzen’s less-than stellar track record at 1080p gaming, which is precisely the resolution that this laptop is equipped with.

Furthermore, other than the obvious boost to multi-threaded performance you get with an 8-core/16-thread CPU, the laptop doesn’t appear to offer any other compelling performance advantage to gamers. It isn’t particularly thin or light at 3.2kg and 35mm thick, and our results confirm that it isn’t too great at power efficiency. Overclocking on the GPU also isn't supported, although you can do that for the CPU.

Maybe I’m being too harsh, but my first impressions of the laptop are one of a hardware showcase as opposed to an attractive alternative for gamers. To me at least, this is an ROG Strix laptop, so its first priority should be delivering the best possible performance in games.

That doesn’t mean I don’t like anything about the laptop however. Even though it qualifies as fairly thick and heavy, it’s actually quite manageable considering that you’ll need a beefy cooling system to handle desktop-grade components.

The Ryzen 7 1700 chip on board is also socketed, so the CPU is actually upgradeable. However, the Ryzen 7 1700 has a 65W TDP, which already poses a challenge for a laptop cooling solution. So while you can replace it with a 95W part, you may run into throttling issues, especially since the CPU and GPU share the same cooling system.

That aside, other components like the RAM and storage devices can be easily upgraded. ASUS has gone with single-channel memory to leave an extra upgrade slot open for you, but it'd have been nice to see dual-channel memory right at the start. 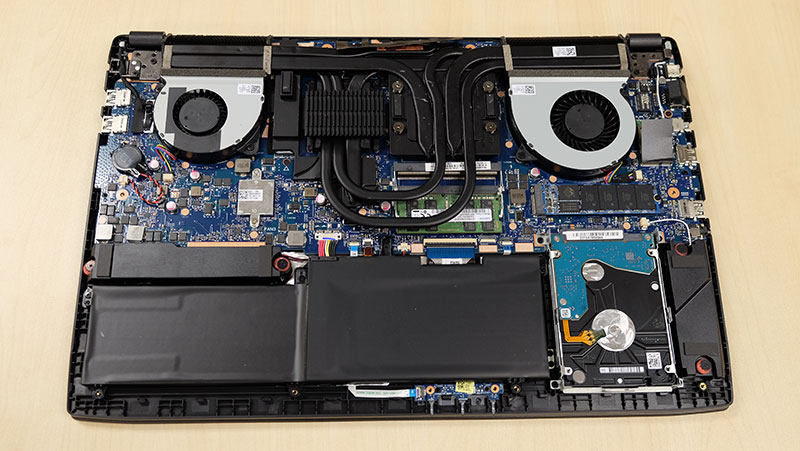 Heat is exhausted out the back of the laptop, and there are no vents at the side. I like this design, as I find that side vents, particularly ones on the right, can be quite annoying as they spit hot air directly onto my hand when using a mouse.

One odd thing about the cooling design is how fewer dedicated heat pipes appear to be assigned to the GPU than the CPU. The Radeon RX 580 has a TDP of 185W, and even though it’s been tweaked to be more suitable for use on a laptop – the base clock speed has been dropped from 1,257MHz to 1,077MHz – it probably still puts out more heat than the processor.

The dual fans are also asymmetrical, with the smaller fan dedicated to cooling the GPU. Two separate heatsink fins complete the cooling setup, where they help soak up the heat put out by both the CPU and GPU. 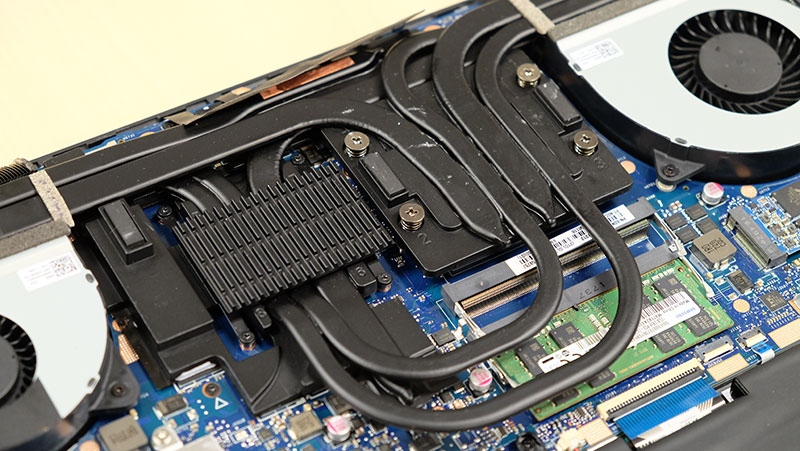 As you'd expect, the laptop is rather noisy, and you can quite clearly hear the fans working hard to cool those desktop components. Headphones are probably a good idea when using it, unless noise doesn’t bother you at all.

Design-wise, this is one of the less garish gaming laptops I’ve come across. Still, as a member of the ROG Strix series, it has orange accents on the speaker grilles, the ROG logo above the keyboard, and around the trackpad.

One new design feature is also the backlit ROG logo and accents on the lid, which powers down to leave a mirror-like finish when the laptop is turned off. 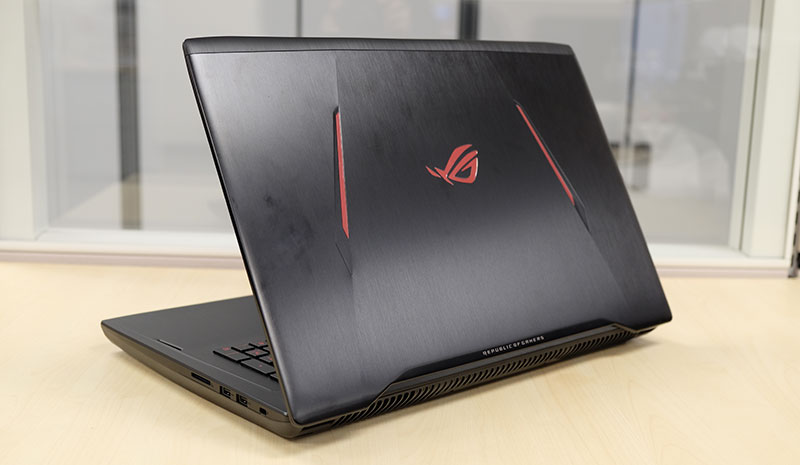 Most of the laptop uses a black brushed metal finish, and you can see it on the lid and the area framing the keyboard. And while the laptop is built predominantly from plastic, the lid actually has a thin brushed metal coating that isn’t present on the palm rest area.

The keyboard feels good to type on, even though it doesn’t use one of those fancy, low-profile mechanical switches. The 1.6mm key travel distance feels okay to me, but there’s some flex to the keyboard base when typing. It’s not a particularly big problem, unless you're really fussy about things like build quality. 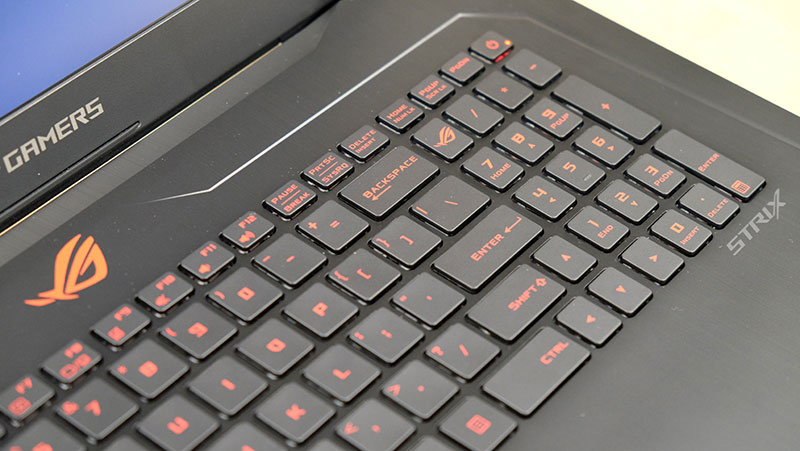 And as befits a gaming notebook that’s this large, there’s a decent select of ports and connectors. You’ll find a Mini DisplayPort and HDMI connector for display outputs, in addition to three USB 3.1 (Gen 1) and one USB 3.1 (Gen 2) Type-C port. A headphone and microphone combo jack and multi-format card reader rounds out the package. 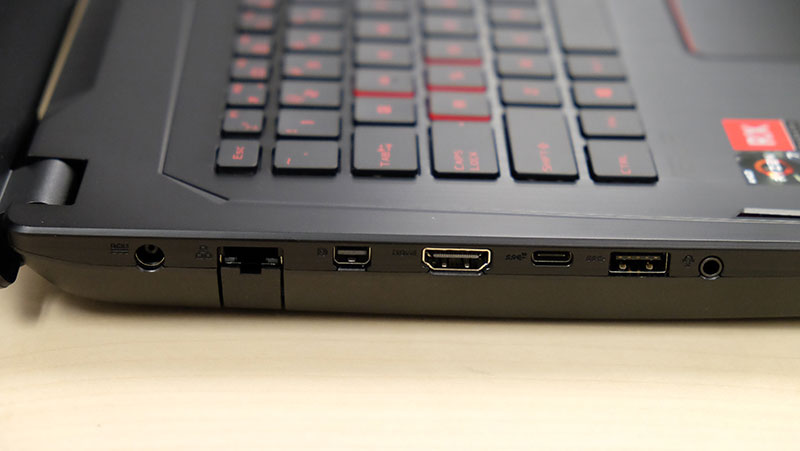 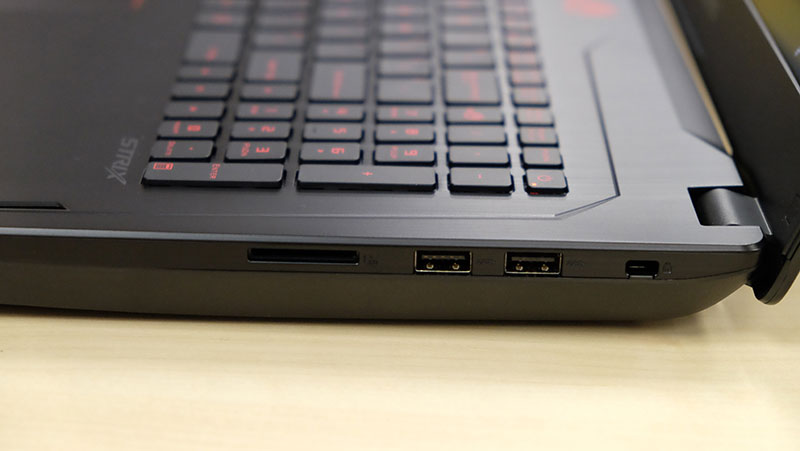 When it comes to the screen and speakers, I’ve no complaints. The 17.3-inch display doesn’t bother with any bezel-free shenanigans, but it’s bright and reproduces colors quite faithfully, to my eyes at least. I’d expect no less from an IPS screen, and the wide viewing angles don’t disappoint either.

Finally, the speakers are also excellent, and the sound put out by the two small, unassuming speaker grilles (or slits, rather) is loud and quite clear. It handled the first Avengers: Infinity War trailer with finesse, and Samuel L. Jackson’s baritone voice sounded lush and detailed.