Note: This article was first published on 14th September 2016. 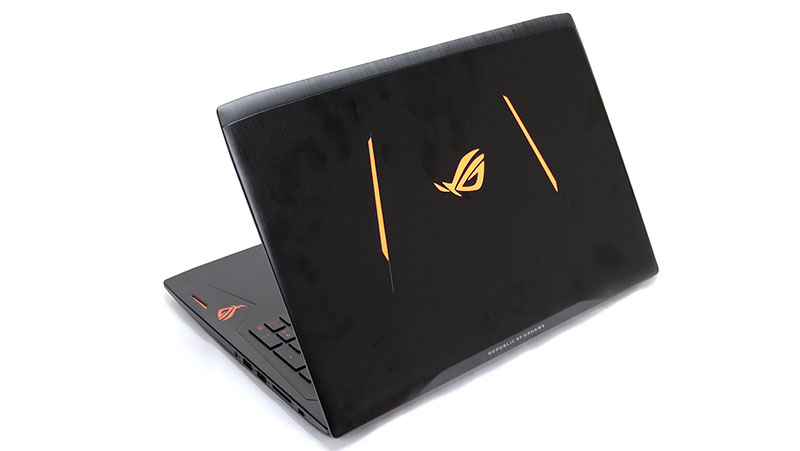 Oh, not another gaming notebook you say. Fortunately, we’re in the midst of another graphics card refresh, which means that there’s something you can legitimately get excited about in the form of NVIDIA’s new Pascal mobile GPUs.

This isn’t your usual year-on-year refresh of mobile GPUs either. For one, this is the first time that NVIDIA has dropped the -M suffix from its mobile graphics card line-up. The new Pascal “mobile” GPUs aren’t pared-down mobile parts at all. In fact, they’re full-fledged desktop chips – albeit with very slight tweaks – that have been stuffed into the incoming wave of refreshed gaming notebooks, and NVIDIA wants you to know that (hence, away with the superfluous -M).

Just how much faster are they than their older Maxwell counterparts? Well, NVIDIA is claiming less than a 10 per cent differential versus their desktop equivalents, which means that the new Pascal cards are fast, very fast indeed.

So when we heard that ASUS was updating its ROG Strix GL502 gaming notebook with NVIDIA’s 10-series Pascal cards, we were more than a little interested. The ROG Strix GL502 was first announced back in May as the first laptop to debut under the ROG Strix brand, espousing a fresh new design ethos while remaining faithful to the ROG name.

A new spin on a familiar design 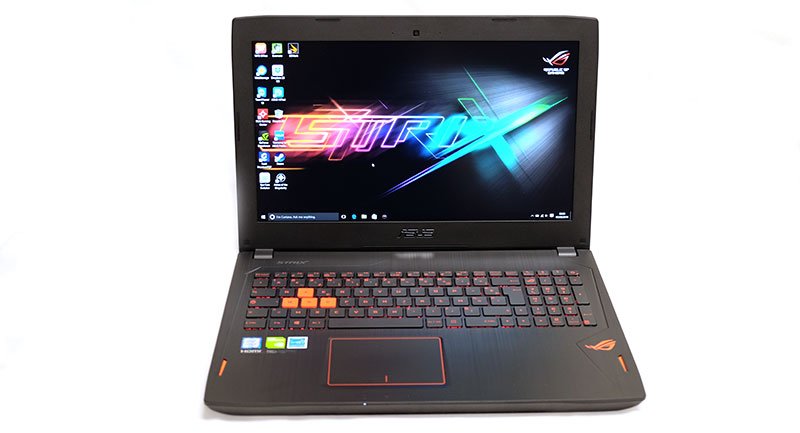 You probably recognize the ROG Strix name primarily from ASUS’ graphics cards, but ASUS has actually since extended it to motherboards, and now notebooks, as well. As an offshoot of the ROG brand, the Strix GL502 retains certain signature ROG design elements, like asymmetric lines around the keyboard and two sloping lines that flank the ROG logo on the lid.

That said, the most arresting part of the Strix’s appearance is its bright neon orange highlights. It is a refreshing departure from the red, black, and copper that has dominated ROG products in recent years,

Almost every aspect of the notebook has been infused with the Strix’s signature orange. For starters, the ROG logo and lines on the lid glow a bright orange, and the orange fins of the thermal module are clearly visible from the rear. And of course, the lettering – and backlight – on the keyboard is the same neon orange, and the WASD key cluster has been drenched in the same eye-popping hue. As a final detail, the speakers on the palm rests have also been outfitted with a neon orange mesh. 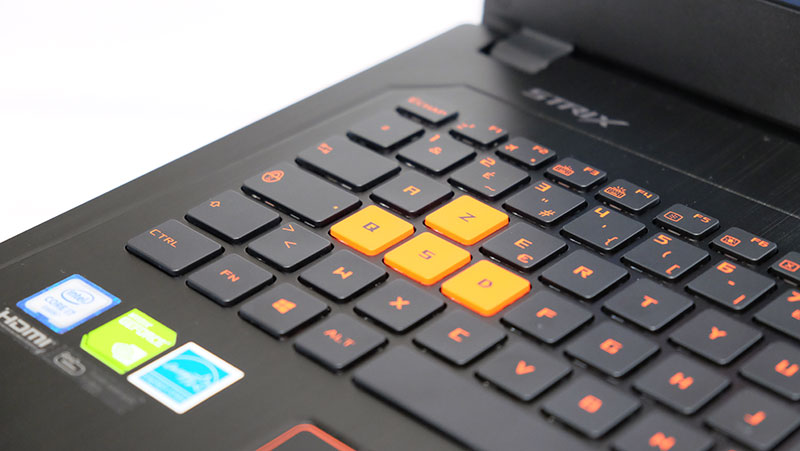 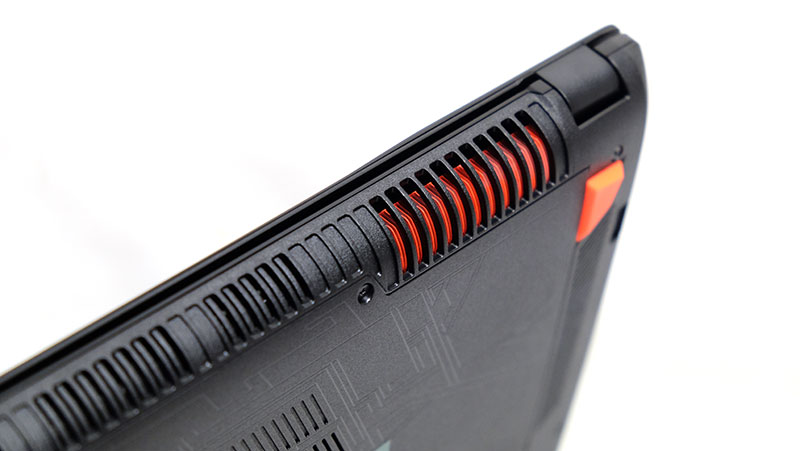 Unfortunately, the keyboard on our review unit is not of the regular QWERTY variety, so the key layout you see here will be different from what you get on an actual retail unit. That said, there was nothing remarkable about the typing experience. Key travel distance was good, but this isn’t one of those notebooks that distinguishes itself with a mechanical keyboard or an emphasis on especially far key travel distance. If we were to nitpick, one issue would be the narrow arrow key cluster, which took some getting used to.

Other design refinements over existing ROG notebooks include a wider spacebar, and yes, orange highlights around the touchpad that help delineate the left- and right-click zones more clearly. We also really like the brushed metal finish on the palm rest, which proved quite effective at resisting fingerprints during our use and helps convey an overall more premium feel. 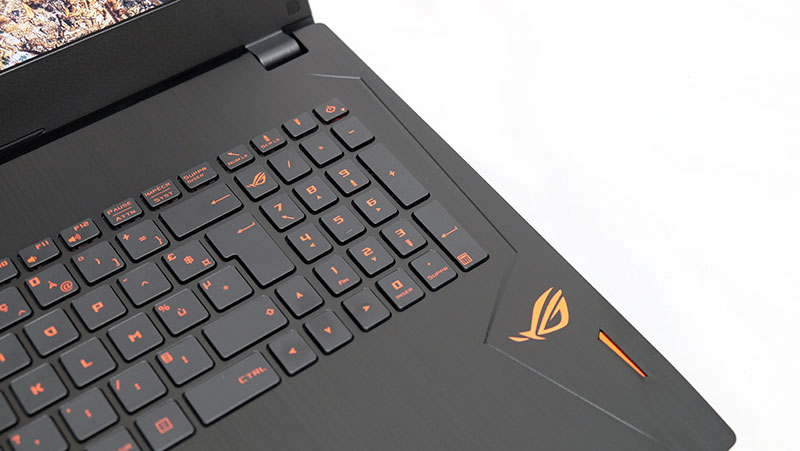 And in case you’re wondering, the rubber feet on the notebook is the same retina-searing color as everything else.

As far as gaming notebooks go, this is quite sprightly at 2.3kg. It cannot be considered light, but the good news is that it doesn’t feel like a ton of bricks either. The GL502VS with the GeForce GTX 1070 is the thicker of the two models, coming in at 30.1mm thick versus the 23.5mm on the GL502VM (which is equipped with a GeForce GTX 1060).

As mentioned above, the ROG Strix GL502 is actually available in two variants – the GL502VM and GL502VS. Our review unit was the latter, which also happens to be the more powerful of the two configurations. Here’s a quick rundown of its specifications:

The lower specced GL502VS shares nearly identical specifications, but it comes equipped with an NVIDIA GeForce GTX 1060 instead.

In order to keep the hardware running cool, ASUS has implemented quite a beefy cooling solution in the form of a pure copper thermal module with three flat heatpipes that help keep the notebook slim. ASUS calls this its Hyper Cool Duo-Copper module, and it can supposedly keep the Pascal cards running at their boosted clock speeds. Both CPU and GPU are also cooled independently, and ASUS says the cooling is powerful enough to allow for GPU overclocking. In comparison, older GeForce GTX 970M and 980M notebooks were only able to guarantee the official standard clock speeds, and even throttled below it at times.

We were also happy to see that ASUS has made it easy to access the memory modules, hard drive, and M.2 slots. The back panel can be popped off after removing the 10 screws holding it in place, allowing you to upgrade certain components – or add new ones – if you wish. 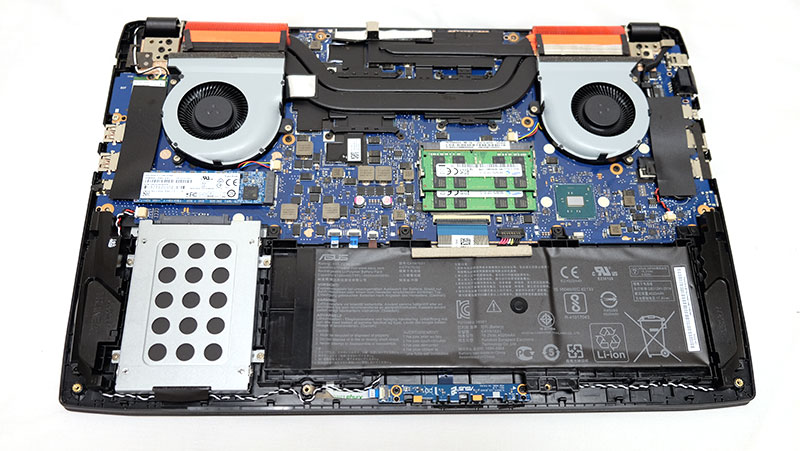 As is typical of most gaming laptops this size, ports and connectors are aplenty. You’ll find a total of three USB 3.0 ports and one USB 3.1 Gen 2 Type-C port for hooking up your peripherals, which should be sufficient for most users. The left port will even let you charge your devices when the notebook is powered off. Strangely enough, the higher-end GL502VS model's Type-C port doesn't support Thunderbolt 3, whereas the GeForce GTX 1060-equipped GL502VM does.

Other ports and interfaces include a single HDMI 2.0 port, one Mini DisplayPort 1.2 connector, a headphone and microphone combo jack, and a 2-in-1 card reader. Finally, there’s a Gigabit Ethernet port for high speed wired connections.

This is an ASUS laptop, which means it comes bundled with a bunch of proprietary performance tweaking software. The ROG Gaming Center is a familiar presence on ASUS laptops by now, and there is a dedicated hotkey on the keyboard that will launch the program in an instant.

The processor in the ROG Strix GL502 doesn’t support overclocking, so you’ll instead find here things like game profile settings or various tweaks like the option to disable the trackpad or Windows key. One of the more useful options is probably the ability to set up individual profiles for up to four games, where you can select custom display or audio presets to best suit the game. 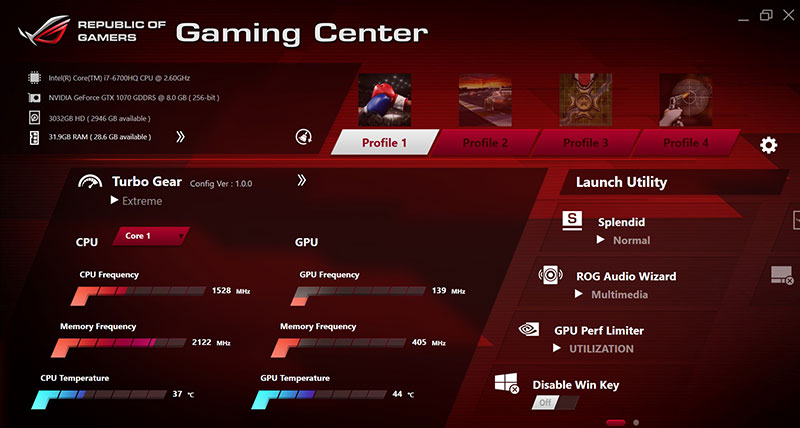 Then there’s the GameFirst IV network management software that can prioritize game data packages and boost the bandwidth available to the game. It’s also able to monitor the bandwidth demands of various programs and applications, so you know which one is hogging your bandwidth, if any. 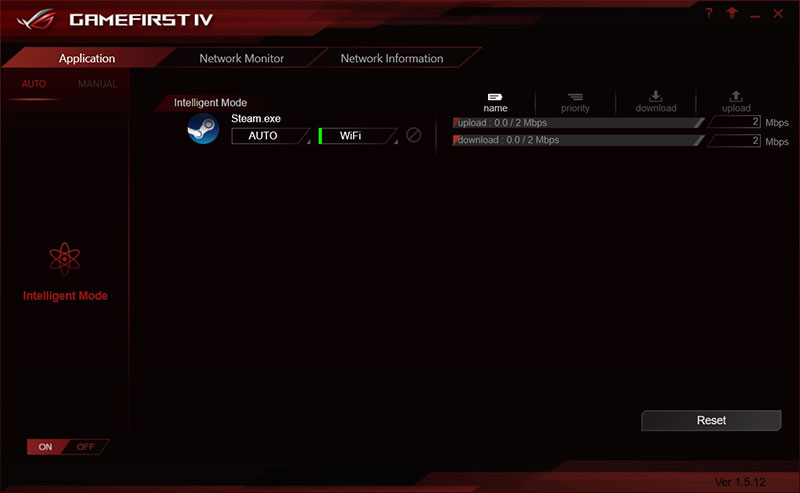