ASUS ROG Strix GeForce RTX 3080 Ti Gaming OC review: It doesn't get much faster than this 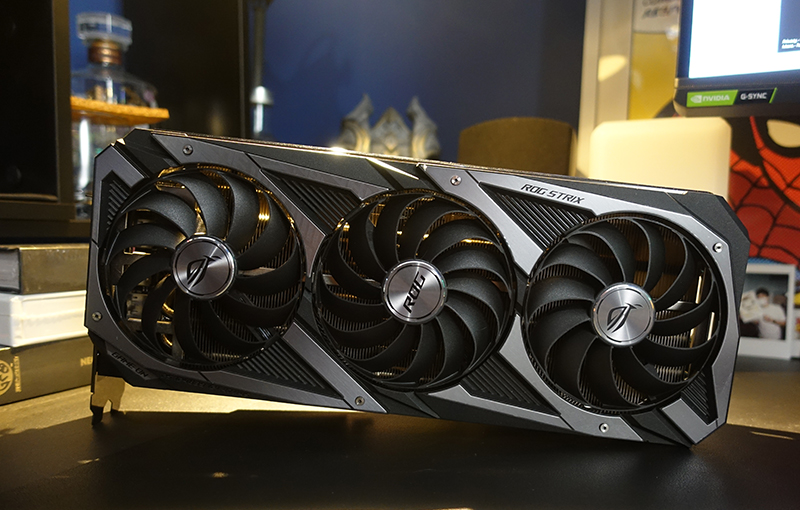 The brand new ASUS ROG Strix GeForce RTX 3080 Ti OC takes NVIDIA's flagship GeForce RTX 3080 Ti and kicks it up to 11. I have no doubt that it'll be one of the most coveted custom cards around, assuming you can stomach the price. At an eye-watering S$2,799, it costs as much as a whole system. If you're buying this, you'd better be making the most out of it with a 4K gaming monitor (or just have plenty of cash to burn).

This is one of the most aesthetically pleasing cards I've seen, although it's the same look we've already seen on the ROG Strix GeForce RTX 3080. The tough-as-nails industrial look is brought out by its hulking 2.9-slot design and triple-fan cooler. It's a behemoth of a card, measuring a good 318mm long. You'll need a good-sized case to fit this in comfortably, and small system builders will want to take a hard pass on this.

Compared to the previous generation, ASUS has beefed-up its design with more metal around its fans, a new fan rotation scheme, and an even larger heatsink with more fins to soak up all the heat the card is going to put out. The PCB has been tweaked too, as has the backplate. 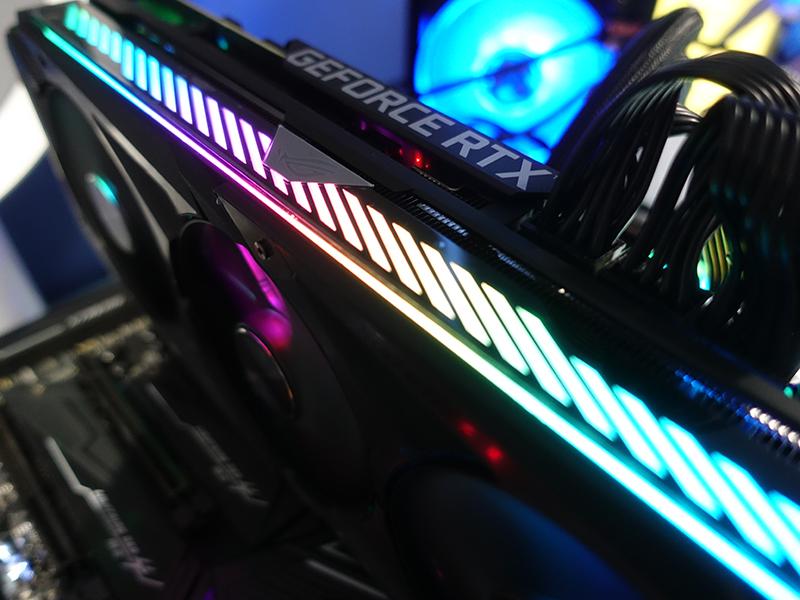 One of the most significant changes is the new Axial-tech fan design. It has been optimised for the larger heatsink with a higher blade count, with 13 on the centre fan and 11 on the auxiliary spinners. The barrier ring on the side fans has also been slimmed down for more air intake at the sides, providing better airflow through the heatsink. On top of that, the centre fan's extra blades and full-height barrier ring provide increased static pressure to channel air directly onto the heat spreader.

The rotational direction of the centre fan is reversed as well, reducing air turbulence inside the cooling array, similar to what Gigabyte does on its WindForce cooler. In addition, the fans shut off completely when card power consumption is low and the GPU temperature falls below 50°C, keeping noise levels down when the system isn't working hard.

But all that wouldn't work if the GPU die cannot offload heat to the fin array efficiently. To help with that, ASUS says it uses its MaxContact tech to improve surface smoothness of the heat spreader at a microscopic level. The extra flatness is supposed to allow for better contact with the die and enhance heat transfer. 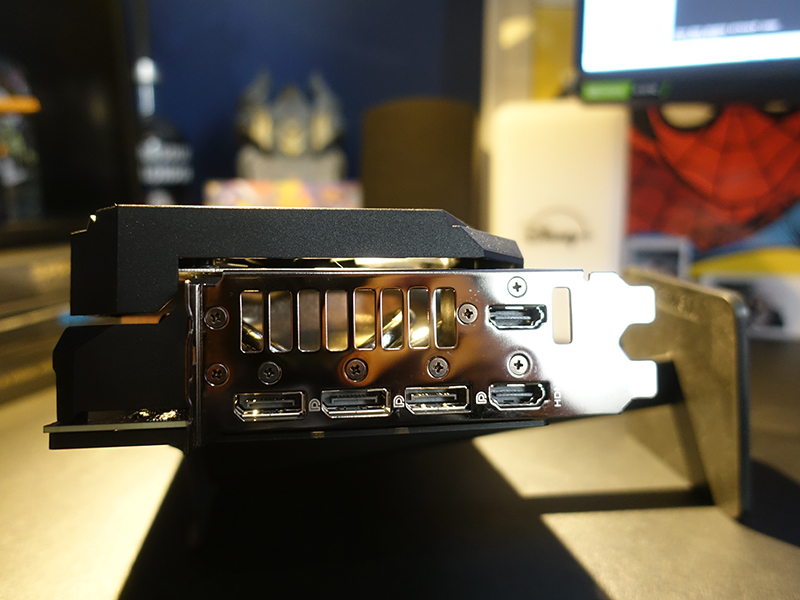 The capacitors, chokes and MOSFETs on the PCB have also been selected for smooth power delivery. They're soldered on using ASUS' Auto-Extreme automated manufacturing process, which is supposed to eliminate human error and ensure smooth solder joints on the rear of the PCB.

Out back, the backplate now features a wide vent, which works in tandem with the shorter PCB to allow hot air to escape towards the chassis exhaust fans instead of being recycled by the cooler. A GPU bracket that runs the length of the card provides extra stability for the critical connection between the die and the heat spreader. This is topped off with the stainless steel I/O bracket, which mounts securely in your case and protects the ports. You'll find access to two HDMI 2.1 and three DisplayPort 1.4a ports at the rear. 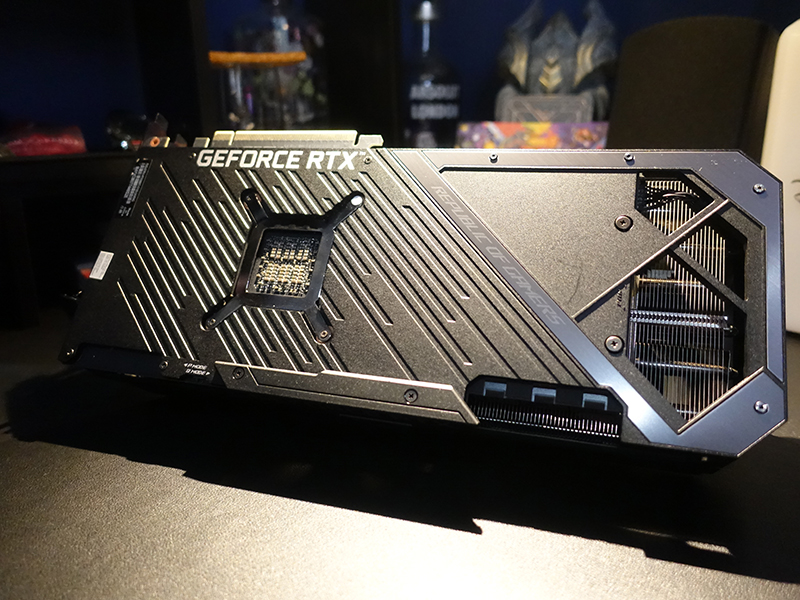 A Dual BIOS switch at the edge then lets you switch between Performance and Quiet modes for quick and easy customisation without software. 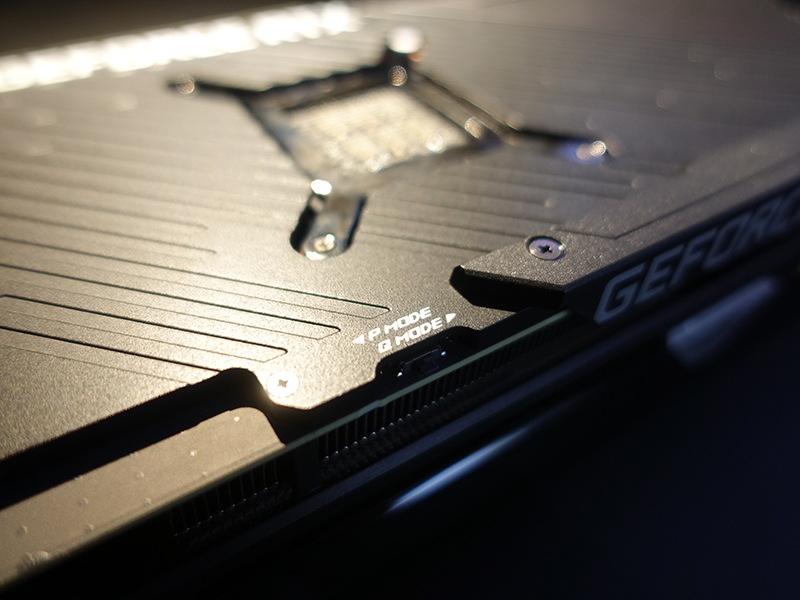 Finally, you'll need a whopping three 8-pin connectors to power this beast of a card, but at least it isn't NVIDIA's finicky 12-pin connector. 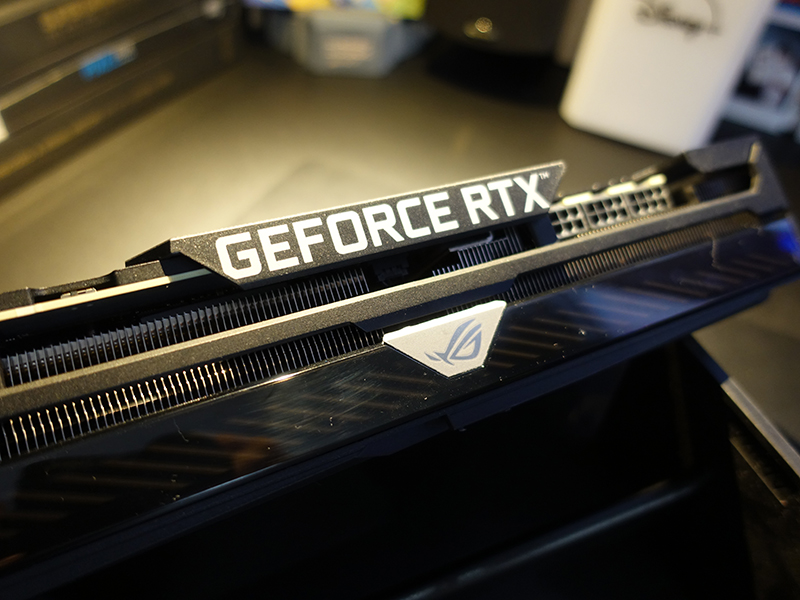 Write a Review
Compare This | Specifications
Cool temperatures
Exceptional performance, even at 4K
Robust build quality and attractive design
Incredibly pricey
Requires three 8-pin connectors and an 850W PSU
Our articles may contain affiliate links. If you buy through these links, we may earn a small commission.