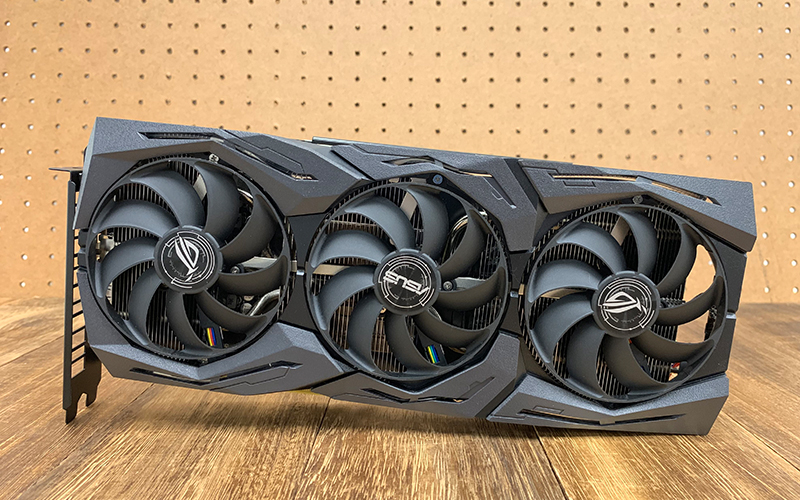 Turing for the masses

NVIDIA today announced the latest piece in its line-up of superfast Turing cards. The GeForce GTX 1660 Ti is the first card based on the Turing architecture to retain the GTX branding, and it’s also the most affordable model yet.

At US$279, it’s attractively priced and clearly intended to penetrate even deeper into the mainstream gaming market. The GTX designation does mean that this is also the only Turing card to not feature ray tracing acceleration capabilities or Tensor cores, so it’s shaping up to be an attractive option for gamers who want the benefits of the Turing architecture without paying extra for the RT and Tensor cores.

Furthermore, it’s priced the same as AMD’s new Radeon RX 590, so it’ll compete directly with that card for gamers who just want to game at 1080p. It's also the proper successor to the long-reigning GeForce GTX 1060, which has cornered the mainstream market for way too long.

So what exactly are the benefits of Turing?

The Turing GPU is all about efficiency. It has dedicated cores for processing floating point and integer operations simultaneously. In addition, its CUDA cores can also take advantage of the latest techniques in programmable shading so the GPU doesn’t expend resources unnecessarily. On top of that, the Turing GPU has a new cache structure that delivers greater flexibility, higher capacity, and better bandwidth.

Turing adds a second parallel integer execution unit next to each CUDA core that can carry out these instructions at the same, which reduces the number of instruction slots needed. Turing also introduces something called Variable Rate Shading (VRS). This comprises the Content Adaptive Shading and Motion Adaptive Shading algorithms, which let the GPU adjust the shading rate for different regions of a scene or for specific objects. For instance, if a certain patch of wall had a uniform texture, the GPU could decide that it didn't need to be rendered in full detail. It would then take fewer samples and expend fewer resources.

Motion Adaptive Shading bases the shading rate on the amount of motion present in a particular region, where fast moving objects could be rendered in lower detail without the viewer noticing anything amiss. Similarly, Content Adaptive Shading is based on the spatial and temporal color coherence across frames. So if a certain element like the sky or a wall persists between scenes, they can be rendered in lower detail as well.

Games have to be coded to take advantage of this though, and one example of a game that can do this is Wolfenstein II: The New Colossus. On top of that, Turing features a new unified architecture for shared memory, L1, and texture caching. The L1 cache is configurable, which means it can grow larger when shared memory allocations are not using all of the shared memory capacity, thus increasing its hit bandwidth.

According to NVIDIA, one game that benefits hugely from the new cache architecture is Call of Duty: Black Ops 4 . 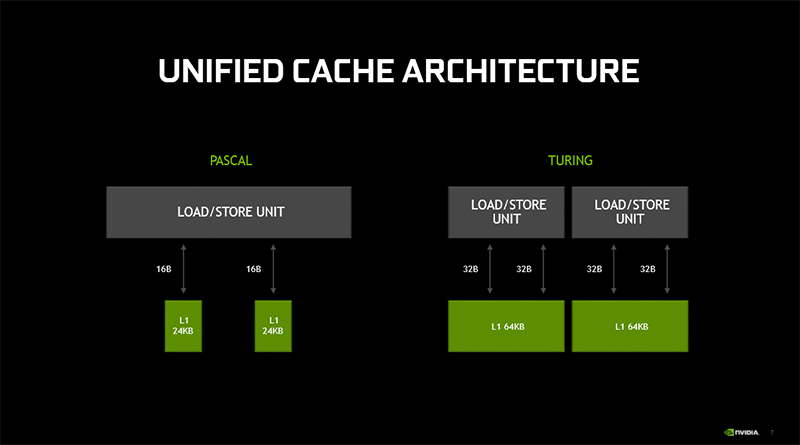 Finally, Turing features an improved NVENC encoder unit that adds support for H.265 (HEVC) 8K encoding at 30fps. The new NVENC encoder supposedly offers up to 25 per cent in bit rate savings for HEVC and up to 15 per cent for H.264. In addition, the NVDEC decoder now supports decoding of HEVC 8/10/12-bit video streams with a chroma subsampling rate of 4:4:4.

NVIDIA says it also worked with OBS to allow the software to take advantage of Turing's new video enhancements. The idea was to reduce the need for a dedicated streaming PC for encoding video content and also lower CPU utilization, which should help improve the quality of life for streamers.

NVIDIA isn't releasing a Founders Edition version of the card, and it's launching right away with custom cards from its partners. The ASUS ROG Strix GeForce GTX 1660 Ti Gaming OC reviewed here today has a base clock of 1,530MHz and boost clock of 1,890MHz in OC mode, but I tested the card at its reference clocks to get an idea of the baseline performance.

NVIDIA says the TU116 GPU in the GeForce GTX 1660 Ti was built to deliver over 120fps in competitive titles like PUBG, Apex Legends, Fortnite, and Call of Duty: Black Ops 4. Furthermore, when compared to the GeForce GTX 1060 6GB, it is better equipped to take advantage of the latest technologies employed by modern games.

The ASUS card is powered by a single 8-pin power connector and features two HDMI 2.0b and two DisplayPort 1.4 outputs. NVIDIA says the VirtualLink USB-C connector is optional, and it is up to partners whether or not they want to implement it. 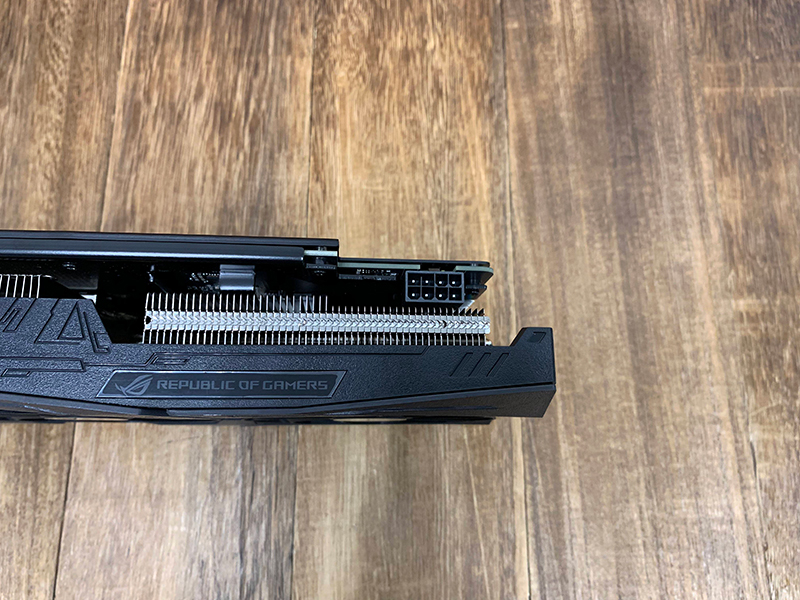 Like other cards in the ROG Strix series, build quality on the card is excellent. It boasts a metal backplate and also features an additional metal brace that further shores up the structural integrity of the PCB. A 6+2-phase power design is also employed here, and ASUS says it has used quality capacitors and chokes that can last longer. 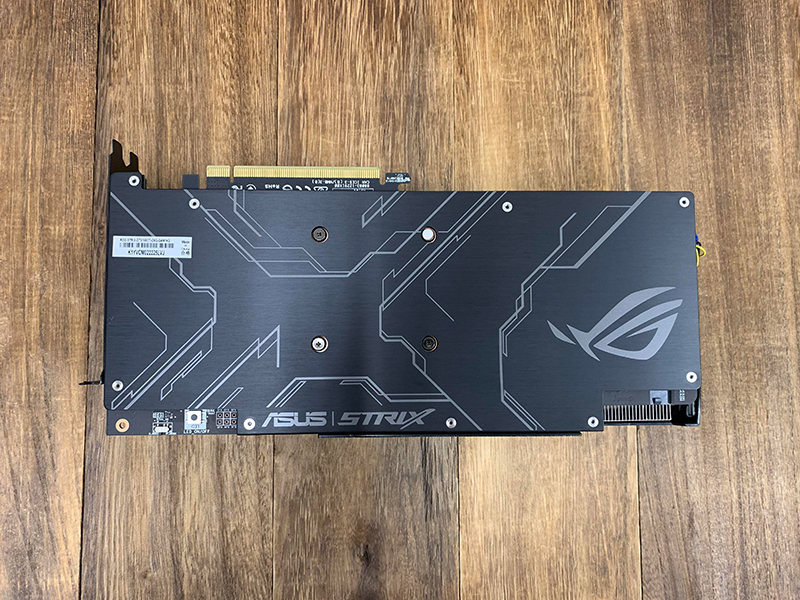 The upgraded cooler we saw on the earlier RTX cards makes an appearance here as well. The card is cooled by three "axial-tech" fans that run really cool and quiet. A BIOS switch also lets you toggle between Quiet and Performance modes, where the former supports semi-passive operation and allows the fans to stop spinning entirely when GPU temperatures fall below 55°C.

In addition, there are two 4-pin fan headers at the front that will work with both PWM and DC fans. These are quite useful as they allow you to peg your system fans to the GPU temperature for better cooling.

Write a Review
Compare This | Specifications
Great cooling performance
Will run any game at 1080p, usually at max settings
Attractive price
No RT and Tensor cores
Our articles may contain affiliate links. If you buy through these links, we may earn a small commission.
Sponsored Links