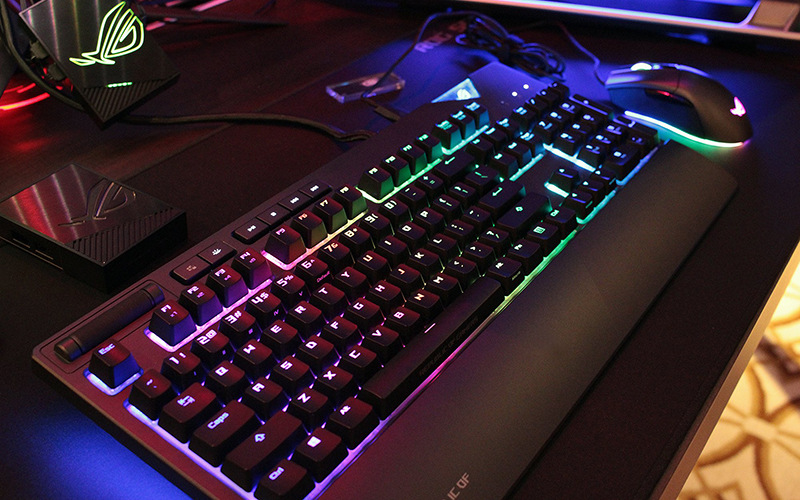 We’ve seemingly reached maximum saturation when it comes to RGB lighting in the PC and gaming peripherals market. For better or worse, ASUS has been at the forefront of the RGB game, and its motherboards, graphics cards, and peripherals tend to look like they’ve rolled across the entire length of an actual rainbow.

The company also has its own RGB lighting ecosystem dubbed Aura Sync, where Aura Sync-compatible products – both from ASUS and third parties – can be synced to the same lighting effect.

The ASUS ROG Strix Flare gaming keyboard plays into this RGB craze in a big way, but it’s also surprisingly one of the more tasteful keyboards that ASUS has released.

The entire keyboard is covered in a plain dark gray matte finish, and it’s blissfully clean of the Mayan styling that ASUS is so fond of. There are also no gratuitous angles, protrusions, or odd shapes, and ASUS has thankfully stuck to a basic rectangle this time around (I still fail to see why a keyboard should be any other shape).

That said, it is of course drenched in RGB lighting, but it looks pretty good. I’m particularly fond of the soft underglow on both sides of the keyboard, which lets you extend your lighting effects beyond the keys. It creates a pleasing effect of light seeping out from beneath your keyboard, and it’s a nice touch that adds some extra flair to the overall design. 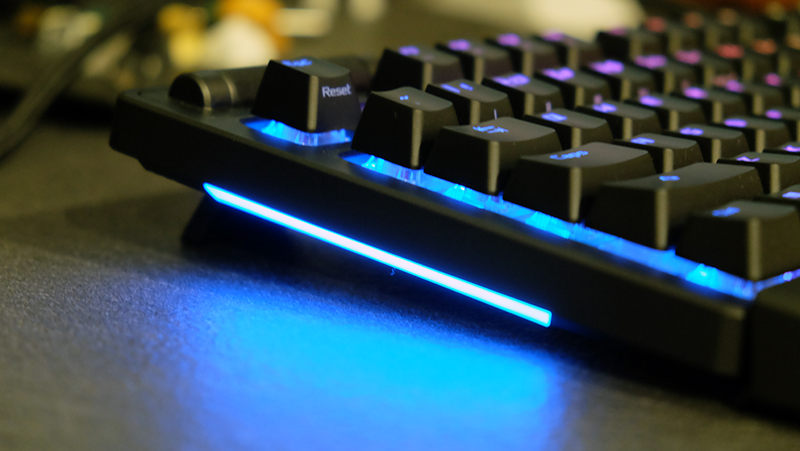 The Strix Flare also supports per-key lighting customizations, so you get super fine-grained control of the color and effect on each key. If you don’t feel like going through the trouble of setting up your own effects, there is a selection of 13 different lighting presets, including new raindrop and current patterns. 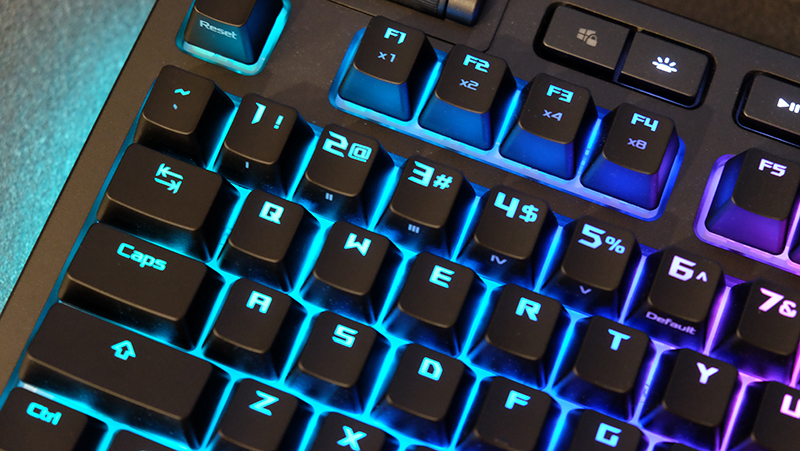 One distinctive feature of the keyboard is the customizable illuminated “badge” that fits into a niche at the top right. The default acrylic badge comes with the ROG logo emblazoned on it, but ASUS also includes a blank piece that you can apply your own design onto.

Design-wise, the badge does help the keyboard stand out from the crowd, and it breaks the monotony of what would otherwise be blank space at the top right of the keyboard. 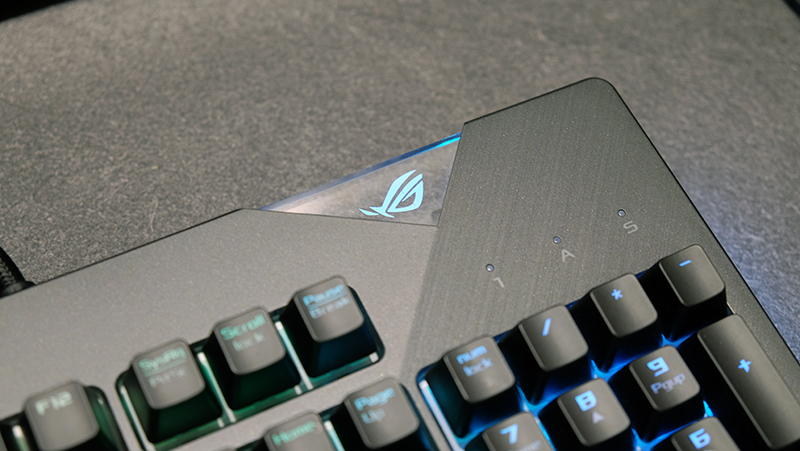 In addition, the Strix Flare sports a white base plate, which helps diffuse the light more evenly and creates a nice contrast with the black keycaps. Overall, the keyboard looks great when lighted up, and I can see it blending in nicely with the RGB lights on an adjacent PC.

The keycaps themselves are made of ABS plastic, which is likely to wear down easily and shine over time. That said, this is unfortunately pretty much par for the course for most mechanical gaming keyboards.

My review unit of the ROG Strix Flare comes equipped with Cherry MX Red RGB switches, a light, linear switch that is probably best suited to gaming. It has an actuation force of just 45g, and I’ve heard people complain about accidental key presses with Red switches. I didn’t encounter this issue, but the Red switches are still so light that it’s difficult to avoid bottoming out with them while typing. 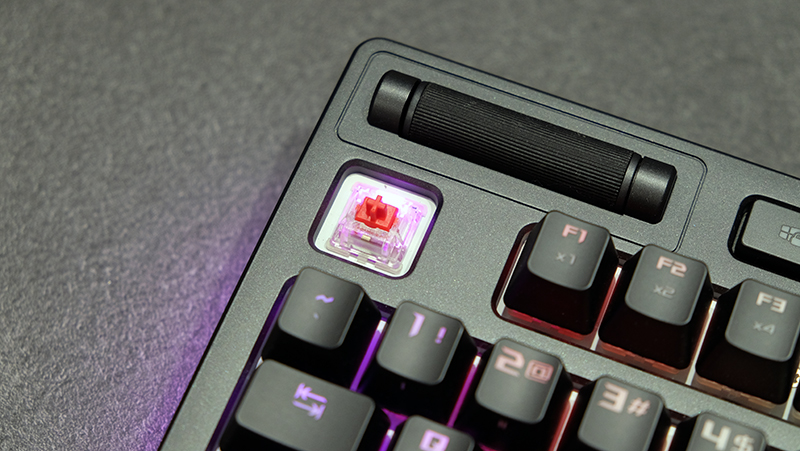 ASUS also designed the keyboard with a focus on ease-of-use, which is why things like the volume wheel and media keys are located on the top left-hand side of the keyboard (which is unlike the Corsair K95 and Logitech G810). This means you don’t need to take your hand off the mouse to make adjustments, and I found this arrangement to be pretty convenient. 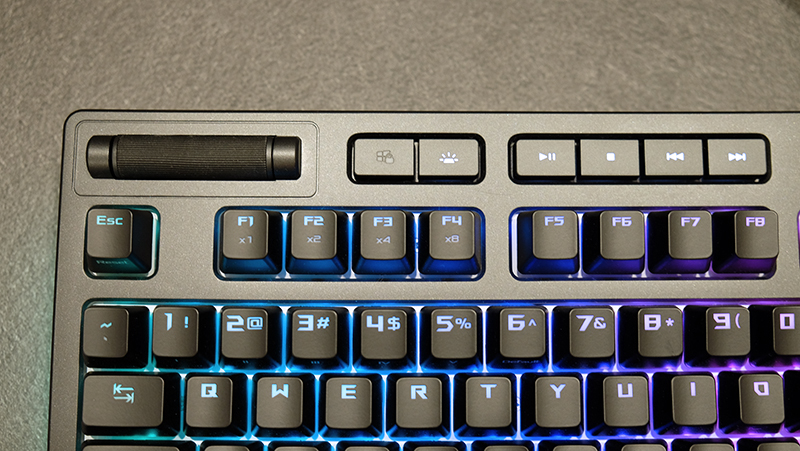 There’s also a color-matched plastic wrist rest bundled with the keyboard. This clips onto the bottom of the keyboard via a couple of notches, and it feels secure enough. However, it’s also rather narrow and feels kind of cheap, a far cry from the padded wrist rest that ships with the Razer BlackWidow Chroma V2.

And make no mistake, the ROG Strix Flare is anything but cheap. At S$299, it’s also S$10 more expensive than the BlackWidow, so it seems reasonable to expect a higher quality wrist rest in the box.

Furthermore, the predominantly plastic construction doesn’t quite convey the feel of an S$299 keyboard, especially when cheaper models like the S$129 Logitech G413 and S$199 HyperX Alloy Elite already incorporate some aluminum alloy or steel. That said, the ROG Strix Flare still feels rigid enough, and if it didn’t cost as much as it did, I’d have few complaints about its overall construction. 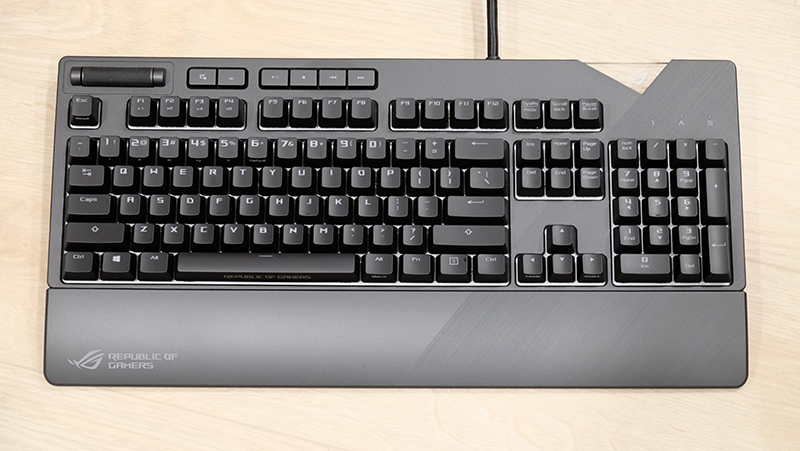 I prefer to use the keyboard slightly elevated, and the rubber-tipped feet do a good job of lifting the keyboard to a comfortable angle. They also feel sturdy and grippy enough, which is good news as the last thing you want is the keyboard slipping around on your table.

The keyboard also comes with a USB 2.0 passthrough, so you gain an extra USB port for connecting your peripherals. Nevertheless, one downside of having the USB passthrough is that you have to deal with a thick and unwieldy cable that splits into two separate USB connectors. 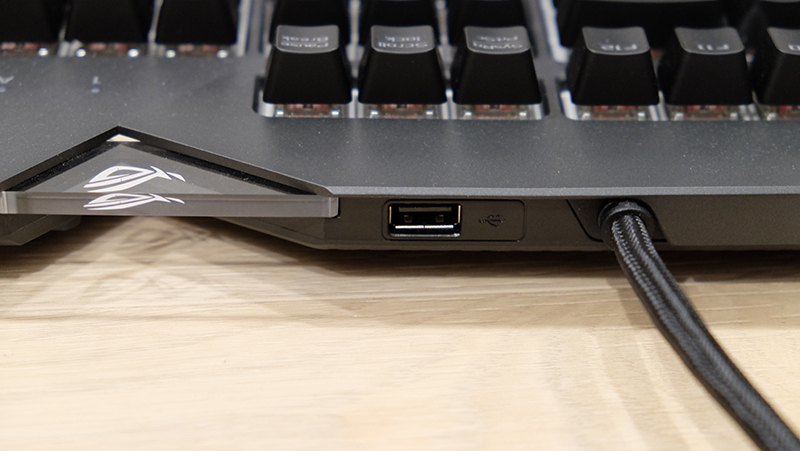 At 454 x 155mm, this is also a fairly large keyboard, so you’d do best to make sure you’ve space for it on your desk.

All told, the ROG Strix Flare is a capable keyboard that won’t disappoint, but mostly if you’re already invested in ASUS’ Aura Sync ecosystem. It’s enjoyable to use and looks great, but if you don’t necessarily need an Aura Sync compatible keyboard, and don’t require all its lighting features, there are better options out there for its asking price.

Write a Review
Compare This | Specifications
Excellent per-key RGB lighting system
Thoughtful media keys layout
Customizable acrylic badge helps it stand out
Very expensive
All plastic construction and wrist rest is disappointing for the price
Thick, inflexible cable
Our articles may contain affiliate links. If you buy through these links, we may earn a small commission.
Sponsored Links