Note: This article was first published on 3 August 2019. 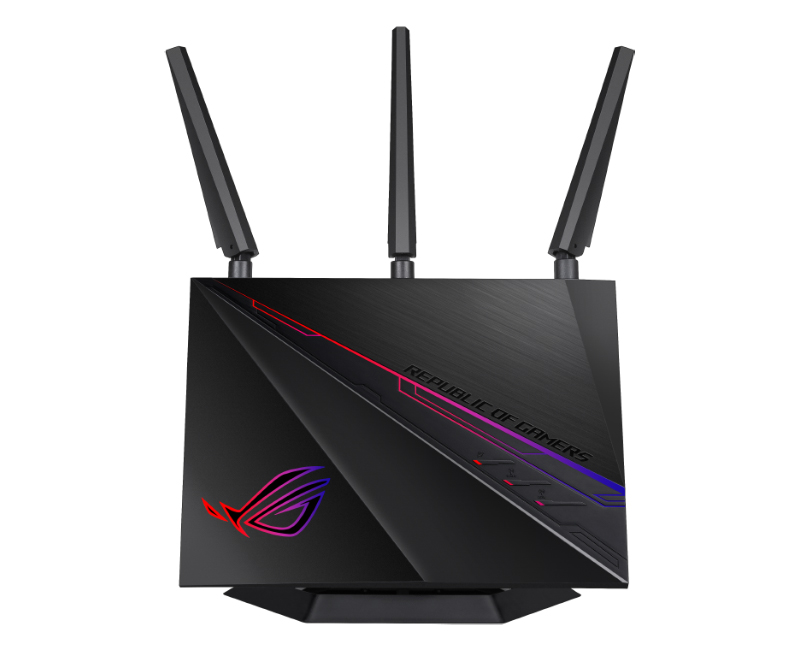 I bet it lacks many of the features found in the higher-end models?

No, it doesn’t. It has all the gaming features found on other ROG routers like Game Radar, game traffic prioritisation, AiProtection, AiMesh, and many more. This is one router that is packed with features. But more on that later.

So how did ASUS make it cheaper? 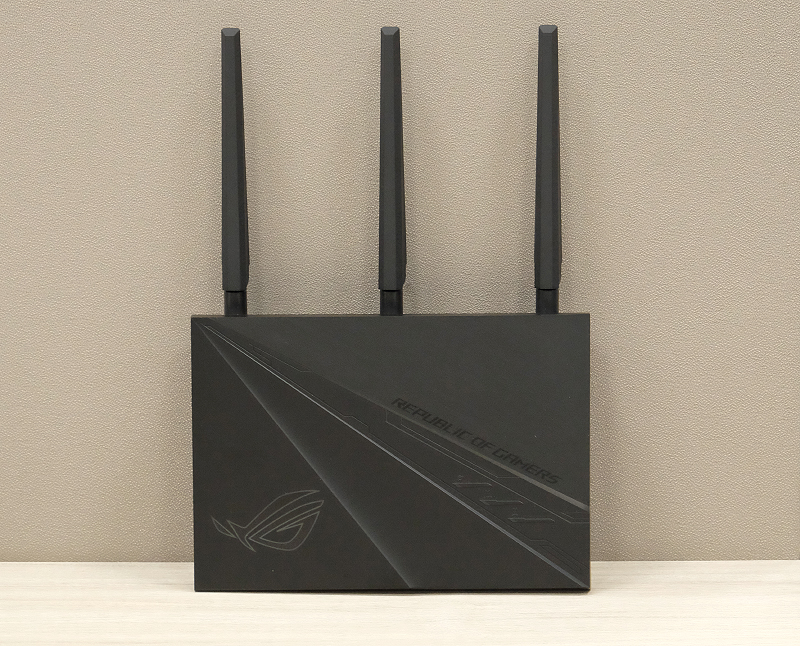 Yes, longtime readers will no doubt spot the resemblance to the legendary RT-AC68U. The benefit of this design is that it has a relatively small footprint, which makes it more flexible to position around the house. Unless today's massive routers, you don't have to clear an entire desk just to make space for the ROG Rapture GT-AC2900.

Can it be wall-mounted? 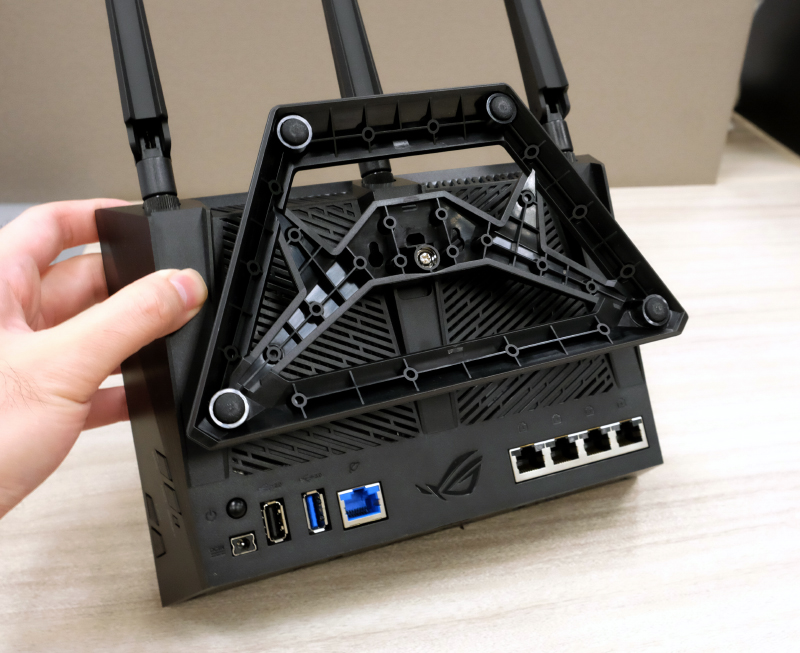 Yes, it can. Its stand doubles up as a wall-mount bracket. Also helpful is that the router is fairly light at just 780g. 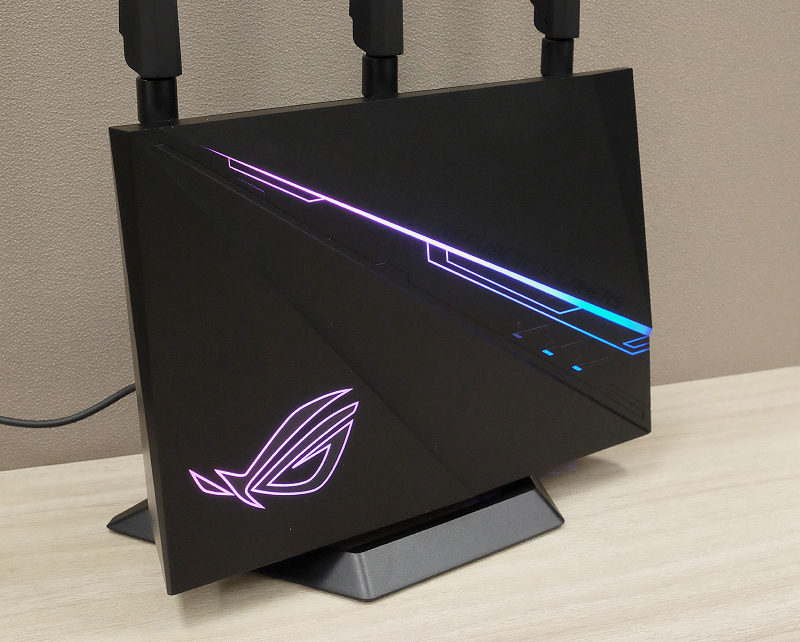 Glad you noticed. One of the features of the ROG Rapture GT-AC2900 is that it supports ASUS Aura Lighting. Say what you want about RGB lighting effects but some players are passionate about customizing the way their gear looks. Besides, if RGB isn’t really your cup of tea, you could always customize it to show a single color or simply turn it off. There’s a handy button at the side of the router that switches all the lights off.

How fast are its Wi-Fi speeds then?

The ROG Rapture GT-AC2900 is an 802.11ac (Wi-Fi 5) dual-band router that supports maximum data transfer rates of up to 750Mbps on its 2.4GHz network and 2,167Mbps on its 5GHz network, which is plenty for most current generation client devices. Best of all, it even supports DFS.

DFS stands for dynamic frequency selection and it’s a useful feature that isn’t supported by many routers. In a nutshell, it allows the router to use less congested channels that are typically reserved for government services. Since these channels are less congested, users can get better Wi-Fi performance by using them. I covered DFS in greater detail in an older article here.

Let’s get to the meat, what gaming features does it have? 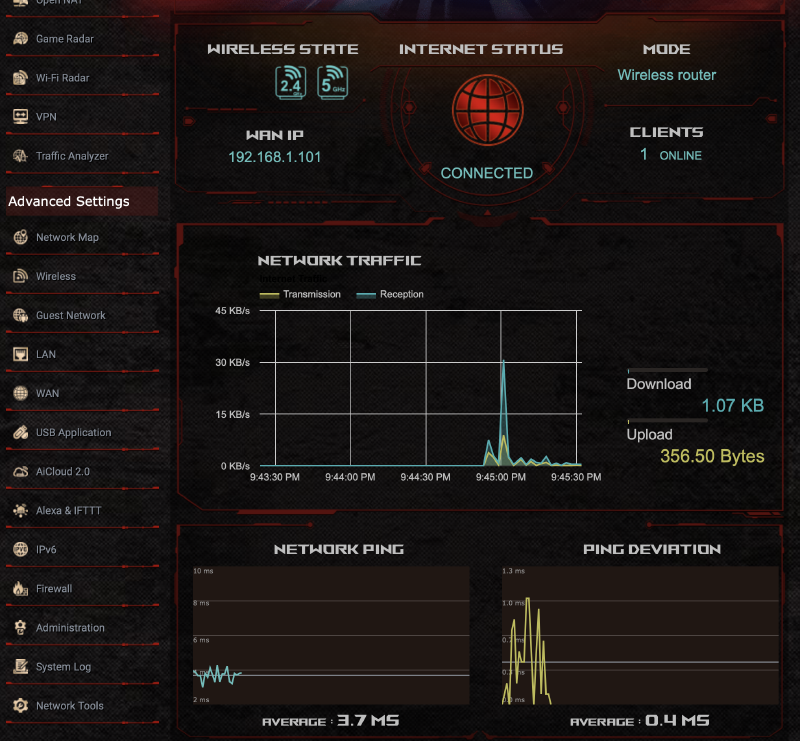 It has a good number. Some help by reducing latency and improving speeds, while other are features that monitor your latency so that you know your game connection status.

First of all, the interface is different from non-ROG ASUS routers. Ok, sure, it looks somewhat familiar but everything has been skinned in red and the main page now shows you network traffic and ping. This way, you can quickly tell if someone else on the network is streaming video or downloading large files and affecting your bandwidth. 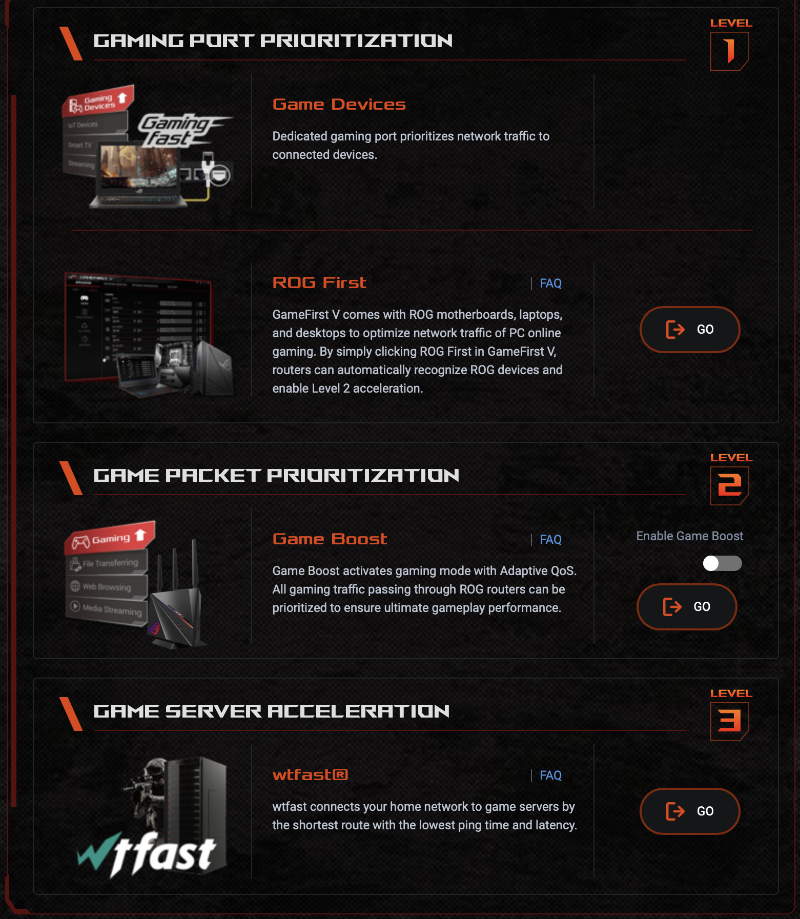 One key feature of ROG routers is Triple-level Game Accelerator. As you might have guessed, it’s made up of three separate features. The first is the dedicated ROG gaming port, which is the LAN port that’s numbered one. The device that is plugged into this port has priority over every other device that’s connected to the router. This can be boosted even further if you have an ASUS ROG motherboard that features GameFirst V. The second component is Game Boost, which is an adaptive QoS technology that actively prioritises gaming data packets. Finally, the last component is wtfast, every ROG Rapture GT-AC2900 comes with a subscription to the wtfast gamer’s network. It claims to provide the shortest connection possible to popular game servers, thereby minimising latency and ping times. 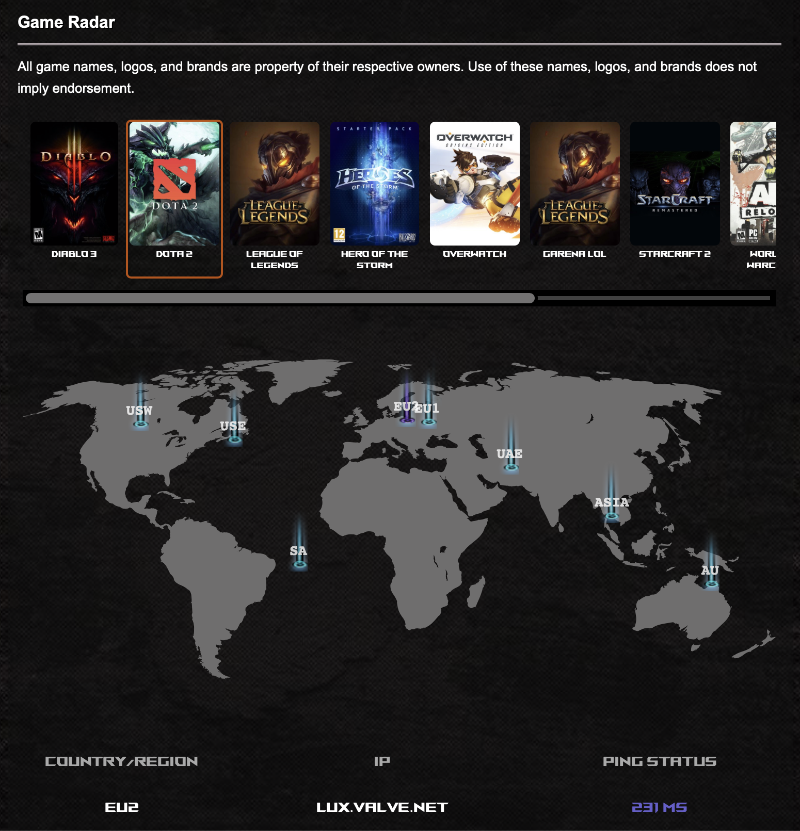 Another nifty utility is called Game Radar. It shows users, at a glance, the ping status of popular games like Dota 2, League of Legends, Hero of the Storm, and more. 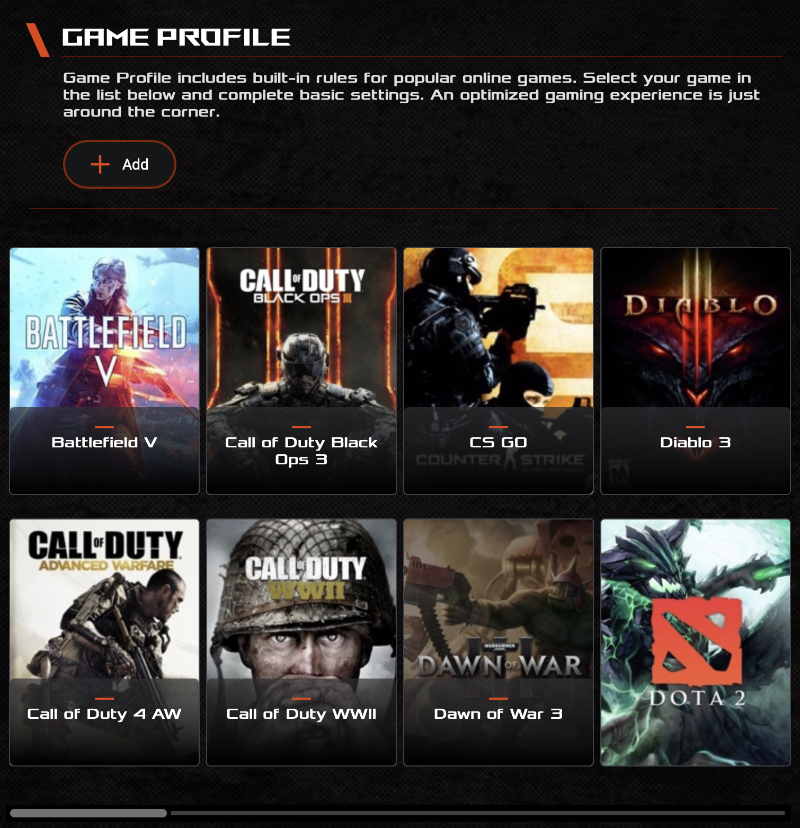 If you have problems with port forward and closed NAT, you’ll be happy to learn that there’s a feature called Open NAT. You can quickly load port forwarding rules for popular games like Battlefield V, Call of Duty 4: Advanced Warfare, CS: GO, PUBG, World of Warcraft, and more.

What're all these buttons on the side?

On the right side of the buttons are five buttons. They can be easily accessed. One is for WPS-protected setup, another is to turn Wi-Fi off, and then there’s one more to activate and deactivate the LED lights. The button with the ROG logo is the Boost key which can be mapped to one of four functions: Aura Shuffle, Game Boost, GeForce Now and DFS channel. 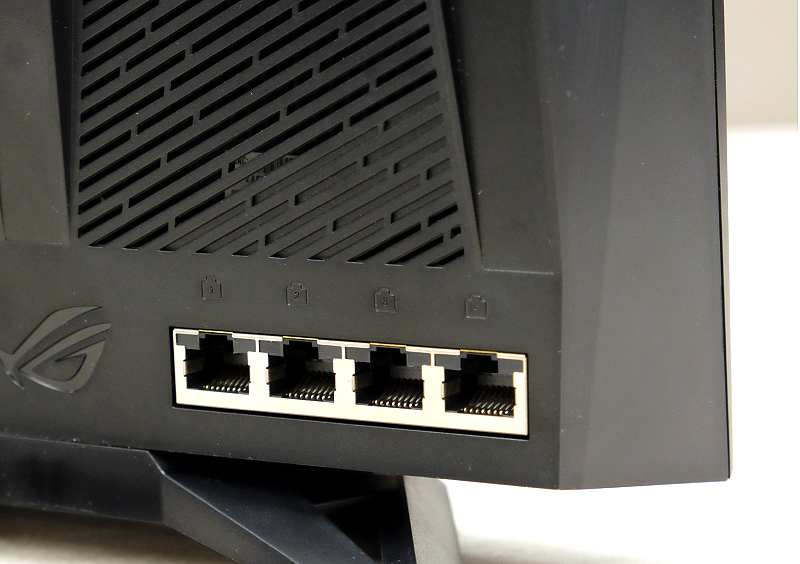 It has a single Gigabit Ethernet port and four Gigabit Ethernet LAN ports. Two of the LAN ports support link aggregation, so they can be combined to create a single 2Gbps connection — useful if you have a NAS that supports this feature. Additionally, it also has a single USB 3.0 port and a USB 2.0 port. These two USB ports can be used for file or printer sharing.

ASUS' routers are chock-full of features and the ROG Rapture GT-AC2900. Covering all of them is going to be akin to writing a book, so here are some other features that are noteworthy and potentially useful:

AiProtection — This is a suite of protection and security features that are provided in part with Trend Micro. It can scan your router to find vulnerabilities (like weak admin passwords), block malicious sites, detect and block compromised devices from connecting to the router. Parental Controls are found under this category. 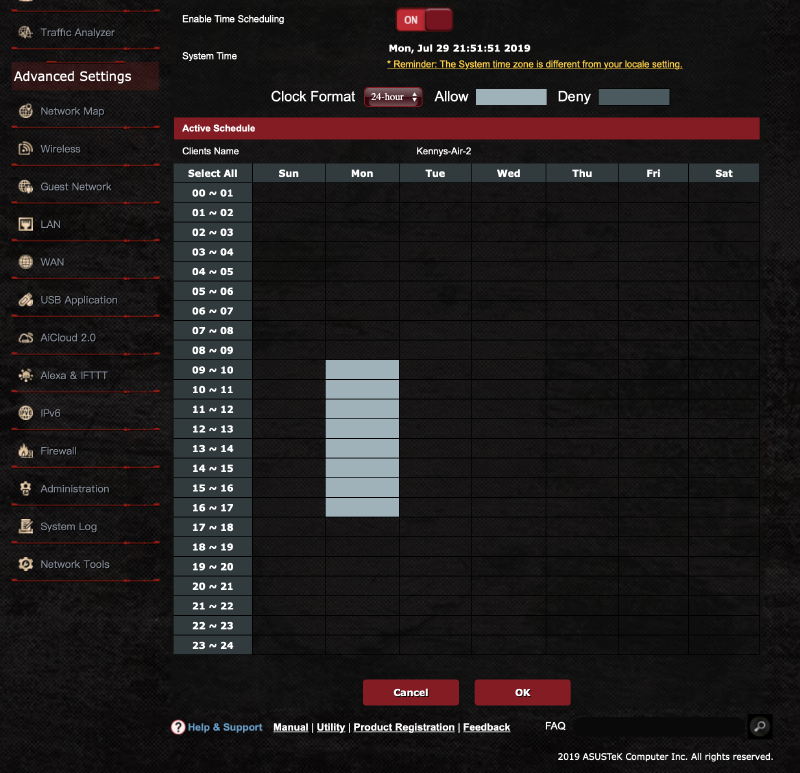 Parental Controls — This is invaluable for any parent. This allows you to manage and control your children’s access to the Internet. One thing to note is that you can only block off one-hour blocks. So you can only restrict Internet access from say, 10pm to 8am, and not 10:30pm to 7:45am. There are also filters you can apply to restrict access to sites and services. The Adult filter blocks access to pornographic or violent sites, while the Instant Message and Communication filter blocks messaging apps and social networking sites. 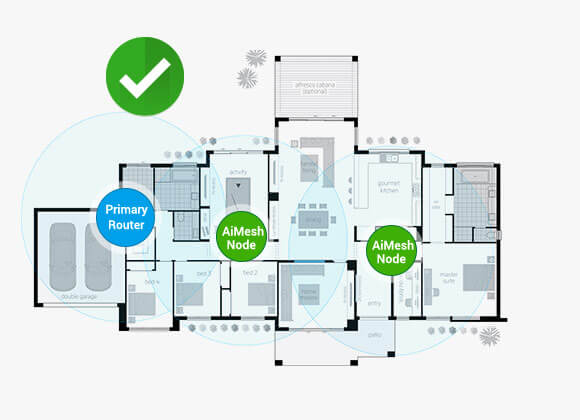 AiMesh — This enables you to create a mesh network with any other ASUS router that supports AiMesh. If you are already using an ASUS router that supports AiMesh, you can put your old router to good use by getting it to function as a mesh networking node and expanding your home’s Wi-Fi coverage. I have covered and tested AiMesh in greater detail here and I have found that it works pretty well. 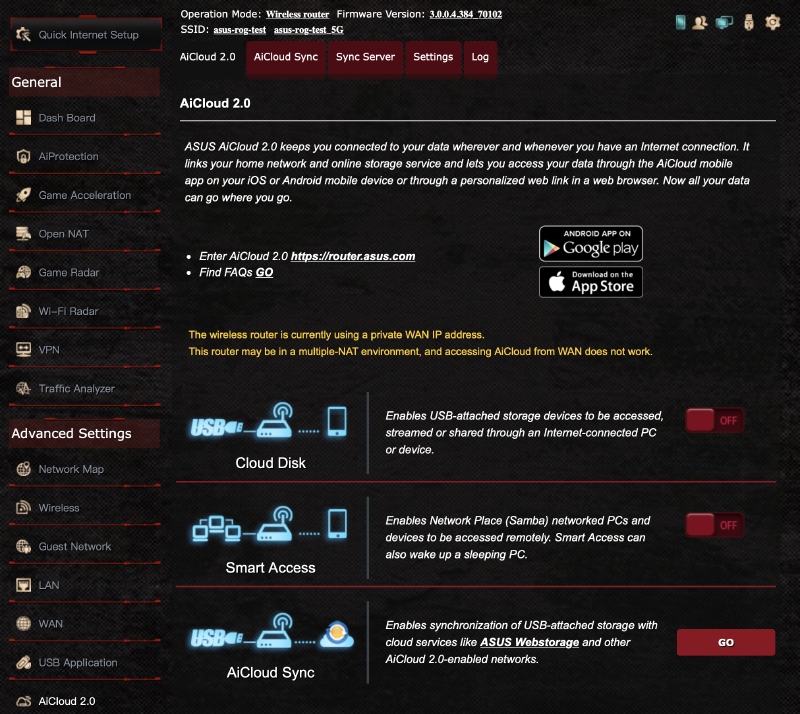 AiCloud — Using the ASUS AiCloud app, you can quickly access and share files stored on an external storage device that is connected to the ROG Rapture GT-AC2900’s USB port.

Can I manage all of this remote using an app? 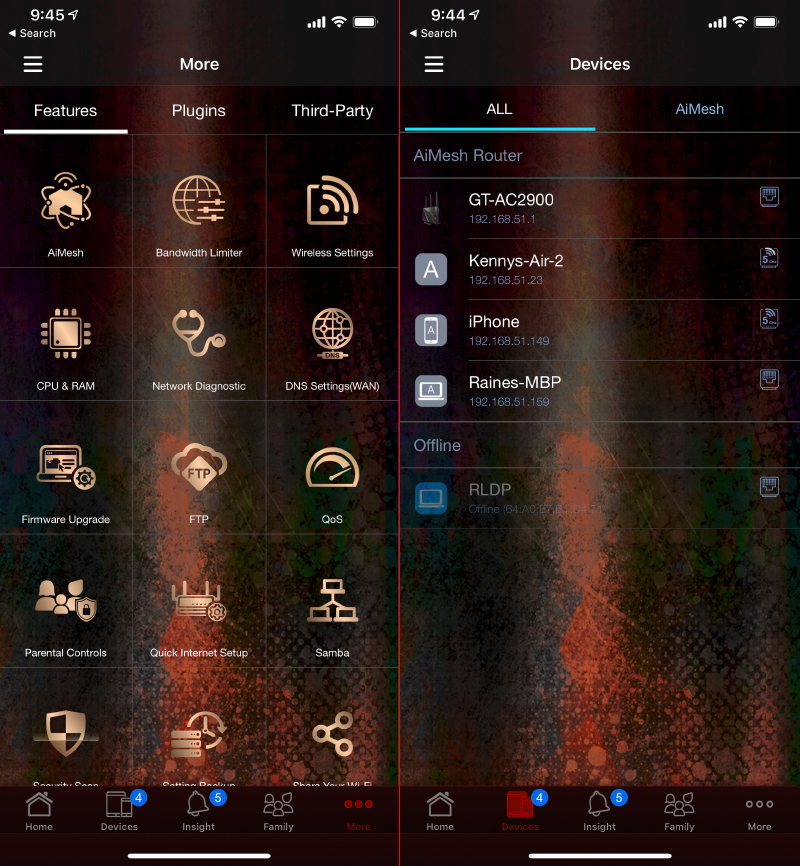 Yes, you can. The ASUS Router app — available free for Android and iOS devices — is actually one of the better ones available. Unlike its rivals, the ASUS Router app is more full featured and feels less like a watered-down version of the router's web management interface. Using the ASUS Router app, you can manage your parental control settings, adjust your wireless settings, create a guest network, see connected devices, configure port forwarding, and even adjust bandwidth limits for devices. That said, some features require separate standalone apps, which can be confusing, and not to mention, cumbersome. For example, the AiCloud app is required if you want to enable cloud storage functionality.

Write a Review
Compare This | Specifications
Good performance
Support for DFS
Dedicated gaming ports
Chock-full of features
Link aggregation
Remote router management
Only four Gigabit Ethernet ports
Mobile apps are cumbersome
Only for StarHub customers
Pricey
Our articles may contain affiliate links. If you buy through these links, we may earn a small commission.
Sponsored Links