On paper, the ROG Phone II with its Snapdragon 855 Plus processor and 12GB of RAM makes it the highest-spec Android phone in the market right now. But how does it compare in our benchmarks against other brands’ top-of-the-line phones? Let’s find out.

​​​​​JetStream 2 measures the browsing performance of a device when processing JavaScript. It not only takes into consideration the underlying hardware performance, but rewards browsers that start quickly, execute code well, and run smoothly. It runs a total of 64 sub-tests for multiple iterations, with each benchmark weighed equally, taking the geometric mean to compute the overall score.

This is a somewhat new benchmark for us, so we’re still building up our database of scores. Based on the phones we’ve tested here though, we’d say the new ROG Phone II performed well, as compared to the competition - and as well as the best performer we've had to-date on the Android camp with the OnePlus 7 Pro.

As you can see here though, the OnePlus 7 Pro absolutely bests the competition with a score of 66.441. That's some 20 points ahead of the nearest competition (the Galaxy Note10), and much higher than the Oppo Reno 10x Zoom, even though they both use the same Snapdragon 855 processor. 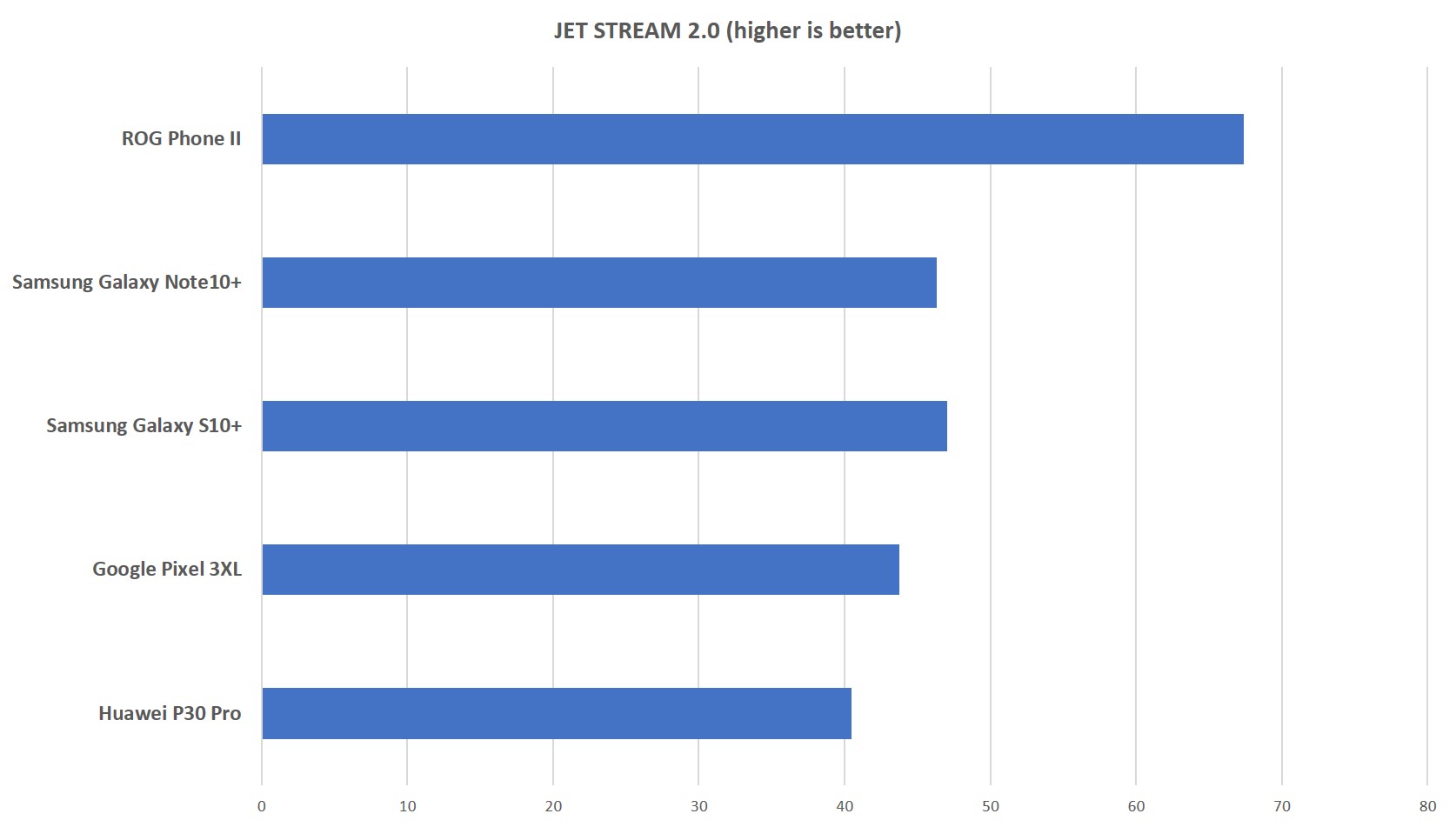 Given that the ROG Phone II is the only phone that features the fastest Qualcomm’s Snapdragon 855 Plus processor, it’s no surprise it outperforms everyone here. Yes, much better than even the OnePlus 7 Pro which has been our lead performer for this benchmark on the Android camp prior to the ROG Phone II. 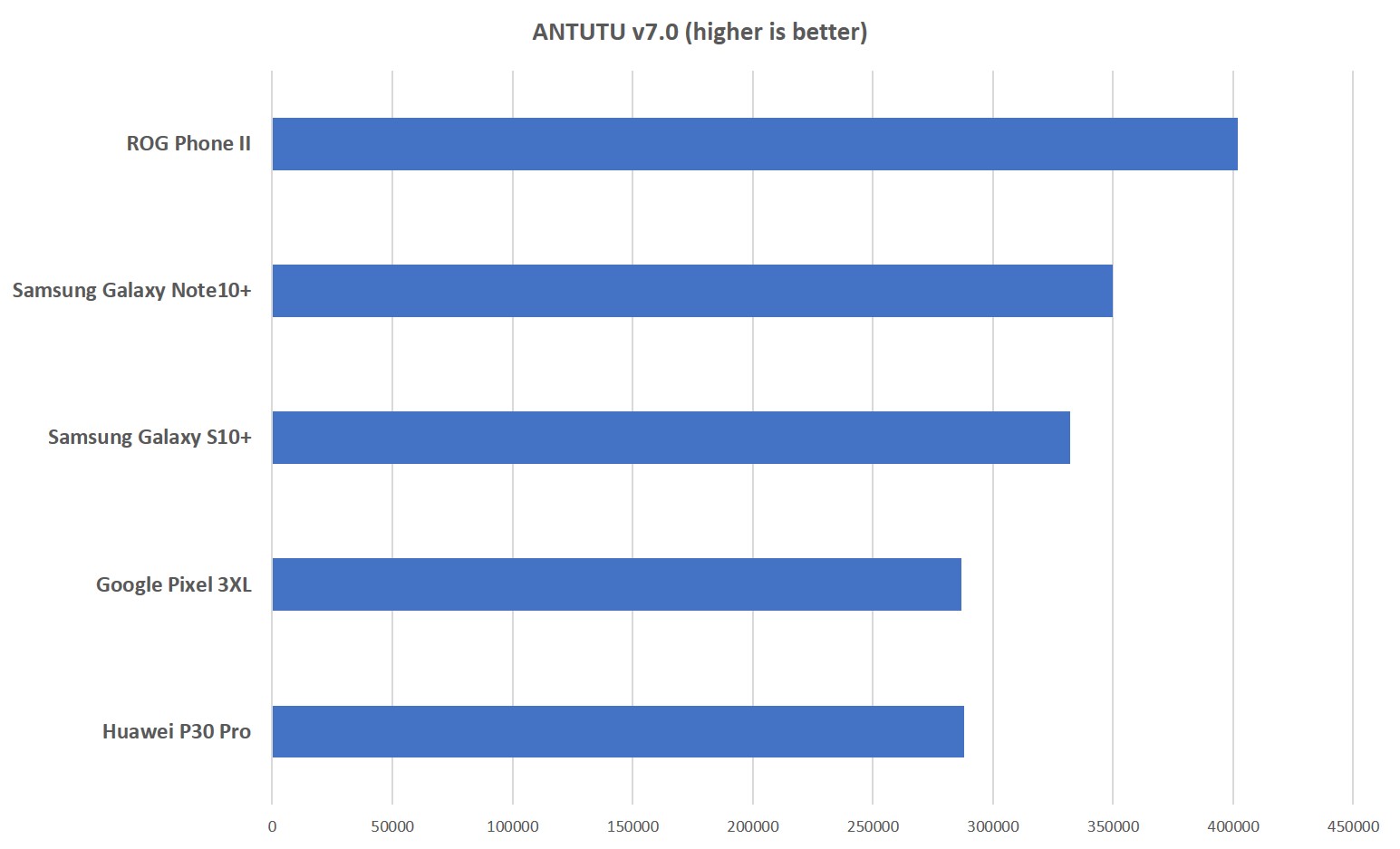 Geekbench 5 is a cross-platform processor benchmark that tests both single-core and multi-core performance with workloads that simulate real-world usage. Geekbench 5 scores are calibrated against a baseline score of 4,000 (which is the score of an Intel Core i7-6600U CPU processor).

Here the ROG Phone II’s single-core performance is on par with the Samsung phones, only gaining a small if negligible gains over them. Its multi-core performance is where the superior Snapdragon 855 Plus processor shows – leaving the rest of the pack to play catch up to it. 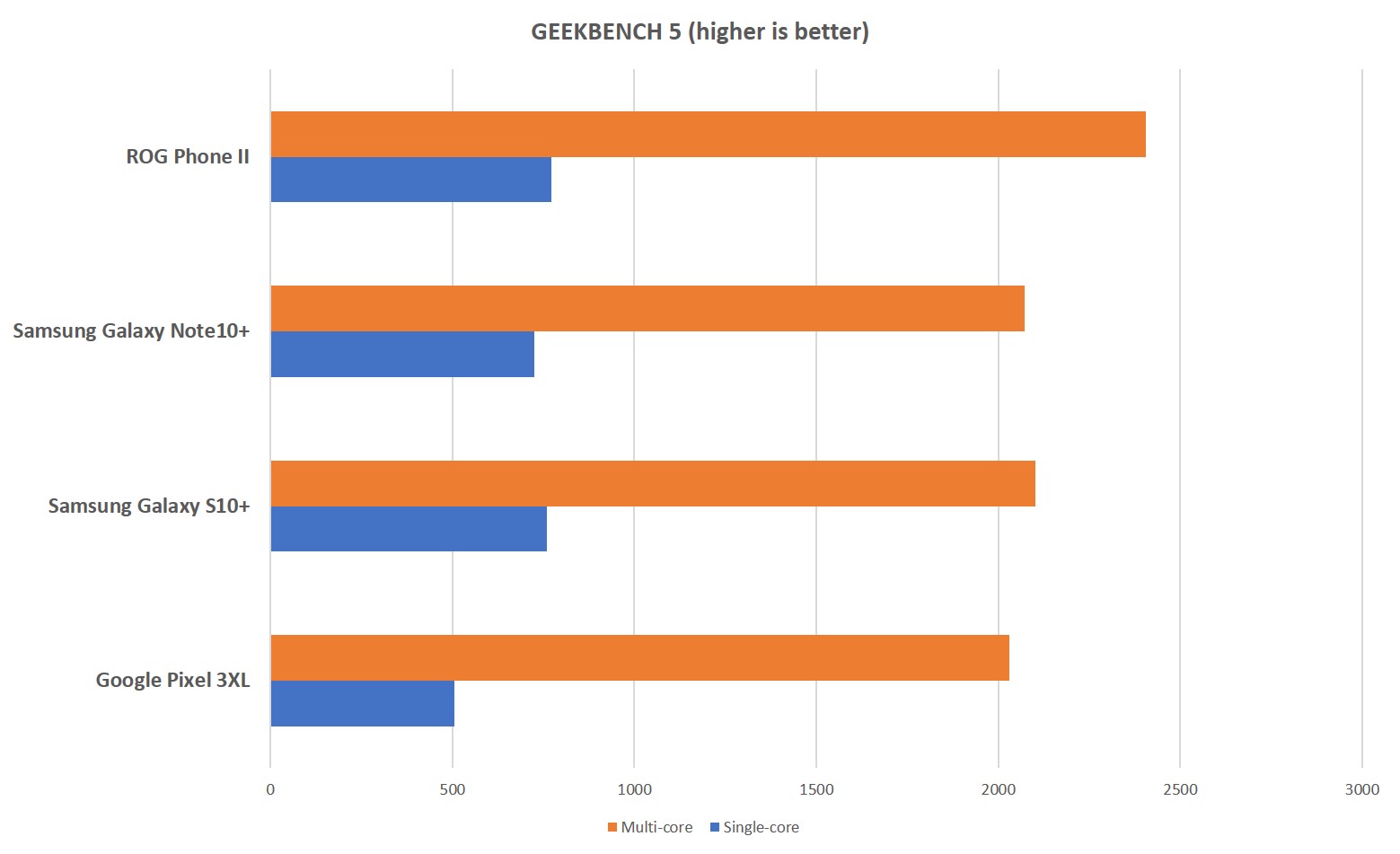 If anything, the results here only affirms what the above benchmarks have shown – for mobile gaming, there’s really no other Android-based phones that outshines the ROG Phone II.  Oh yes, the famed OnePlus 7 Pro is left behind in the dust. 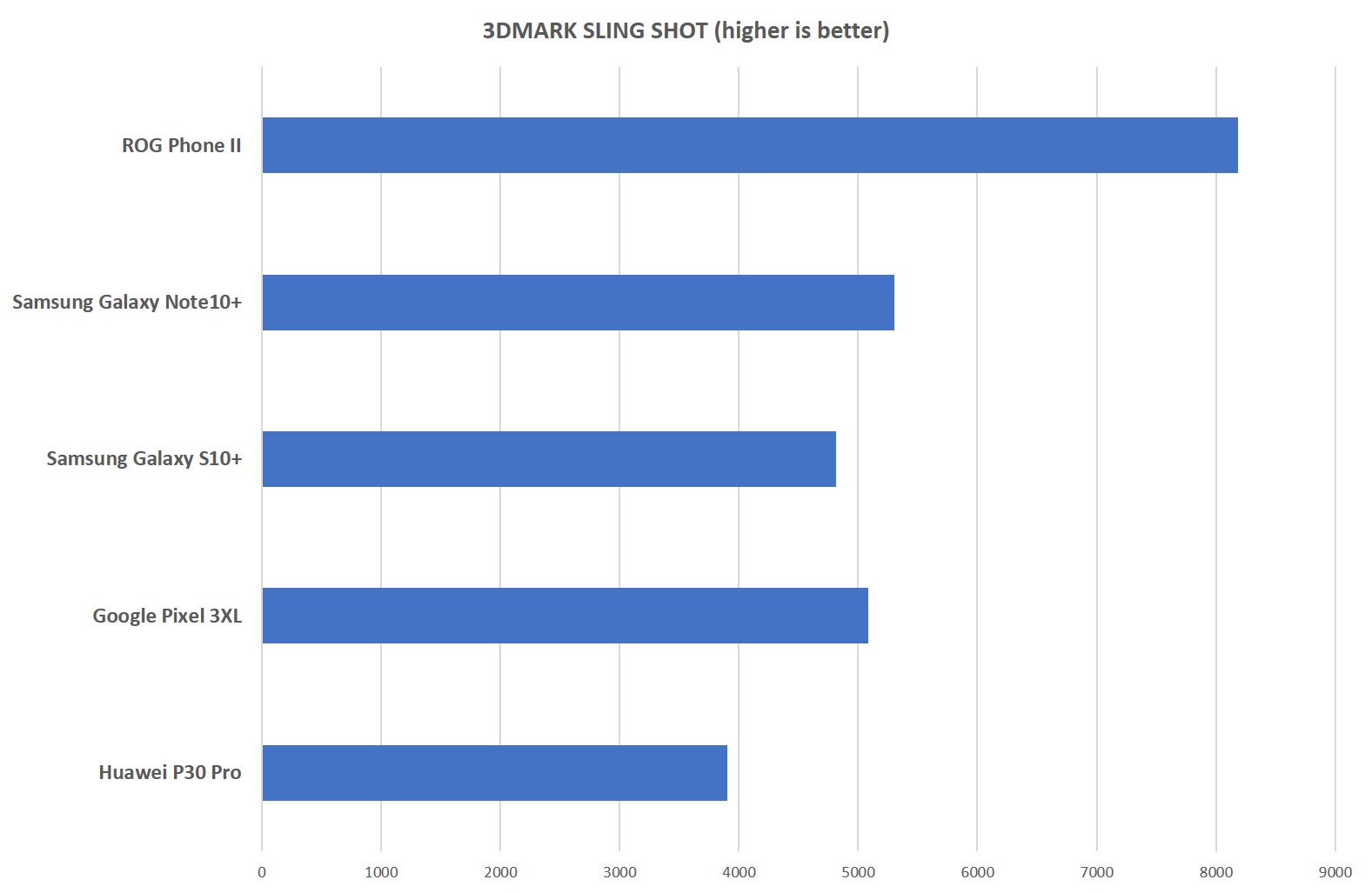 With a massive 6,000mAh battery inside, even the massive power demands of a huge 120Hz screen does not stop the ROG Phone 2 from impressing. It lasts a full day without breaking a sweat on auto-brightness, and if you’re careful, it can get you through two days - just make sure the gaming-centric X Mode and the phone's RGB lighting are turned off.

Within the settings, there’s a PowerMaster feature that opens up control over apps that auto-start, giving you access to a range of battery modes, including Power Saver, Super Saver, and Battery Care, as found in Sony Xperia phones, which slows down charging time to preserve the longevity of the ROG Phone 2’s battery during its entire life.

Turn it off, and thanks to the 30W Quick Charge 4 HyperCharger that ships with the phone, you’ll get about 40% of battery in about 30 minutes, which is impressive given the sheer size of the battery capacity inside the ROG Phone 2. The downside here, however, is that the phone doesn’t support wireless charging.

In our standard battery test rigour for mobile phones, the ROG Phone II still fared well. The following parameters were used for our tests. 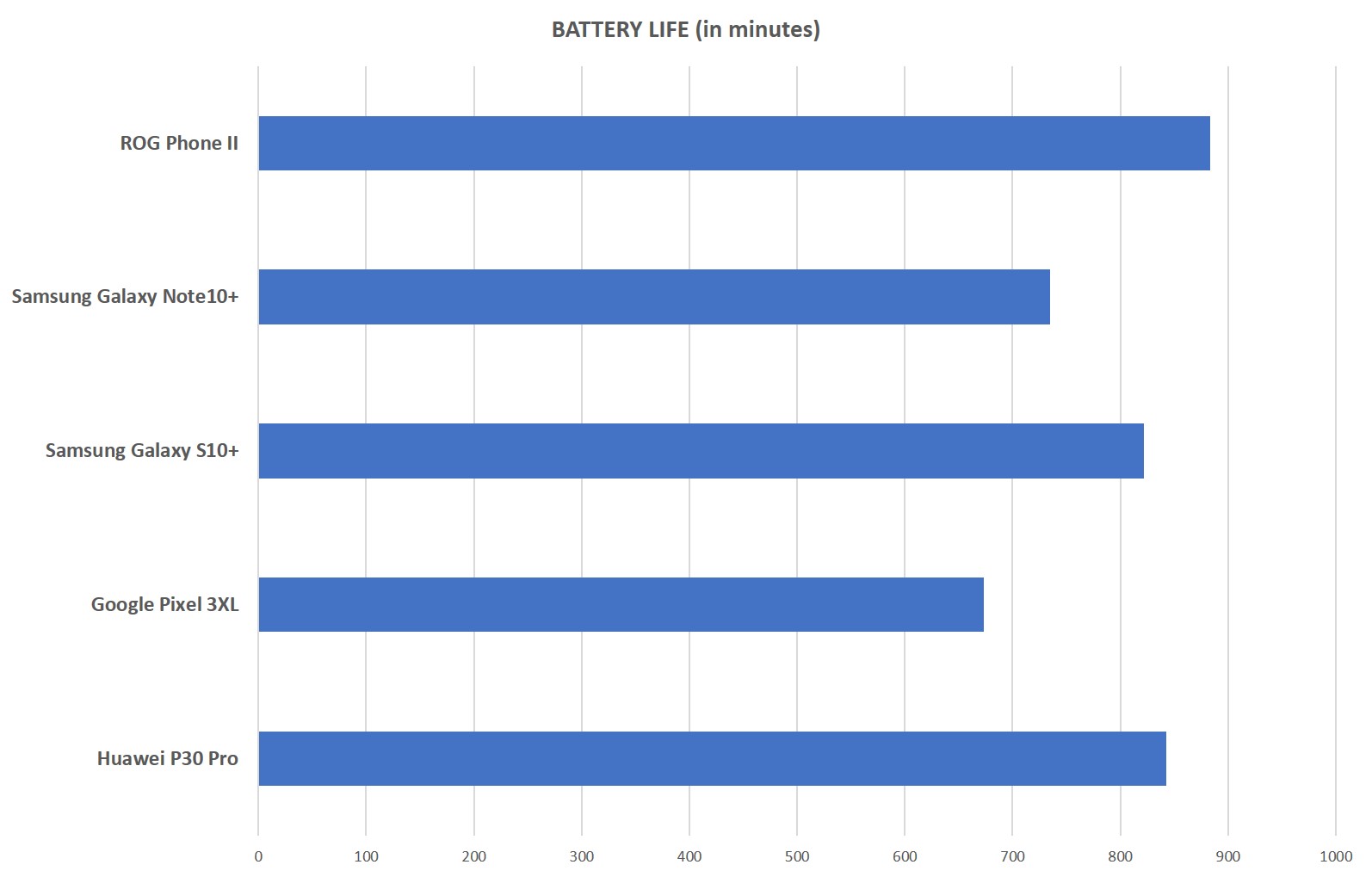 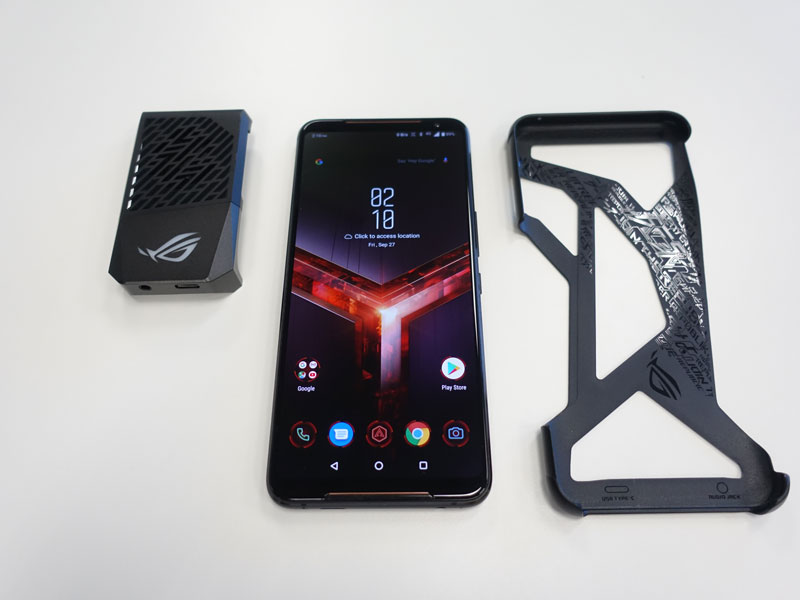 The ROG Phone II has a lot going for it. Its display is fantastic and fast, and the battery life is a champion in the class of any Android phones and quite possibly even the current iPhones as well. You might not get great results with its cameras, but you are guaranteed performance and dedicated gaming buttons in the form of the Air Triggers so if you are all about mobile gaming, the ROG Phone II is a no brainer – it’s the only choice.

As functional and well thought out for its intended audience, unfortunately, its extreme nature comes at a fairly high price tag of S$1,598. It's definitely not the most expensive in the field of Android devices, but given that its design and functional aesthetic works even better with the optional ROG Phone II accessories, which if you choose to collect them all, would cost almost as much as buying another flagship phone!

Think of the ROG Phone II as an extreme smartphone with real gaming prowess and great for all manner of multimedia – there aren’t any other phones quite like it. But if you’re after a more elegantly designed phone that has more all-rounded features appealing to users beyond just gamers and boasts excellent camera performance, then this isn’t it.

However, I can’t think of any other better phones I would like to get my rounds of Fornite or Mobile Legends or for me to binge-watch my downloaded Netflix shows on my next long-haul flight.