What's up with the design? 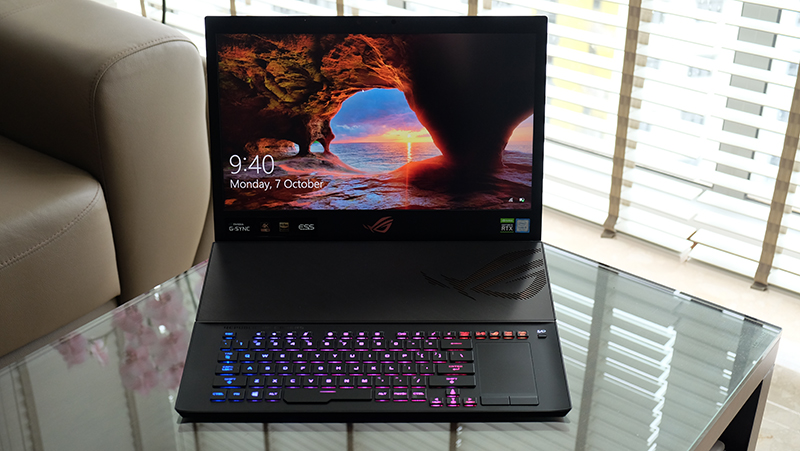 The ROG Mothership's name says most of what you need to know about it. It's big, it's ponderous, and it holds a bristling arsenal of features. But despite ASUS calling this a "portable powerhouse", I'm just going to call it as I see it – this is a desktop replacement. Trust me, you don't want to carry this thing out with you.

Sure, the form factor is pretty cool and somewhat portable. It looks like a giant convertible notebook, complete with a nifty kickstand that pops out when you activate the two pressure-sensitive buttons on its bottom edge. The keyboard is also detachable, which makes you wonder if you could actually use it as a tablet, until you remember that it doesn't in fact have a touchscreen. 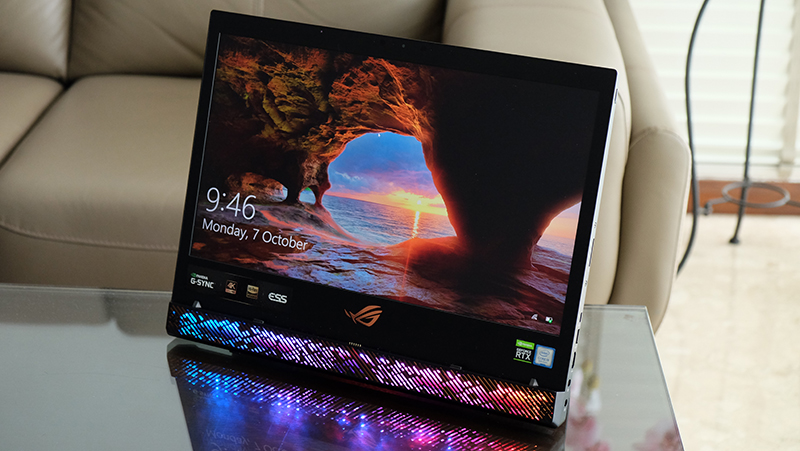 More importantly, the Mothership is really, really heavy. It weighs a good 4.8kg, so even though it's actually reasonably slim at 29mm considering the hardware it holds, it still feels like lugging a sack of bricks around. That's not even the worst of it, as the laptop actually requires two 280W power adapters. If you want to set up anywhere else, you'll have the unenviable task of packing two large adapters along with you. 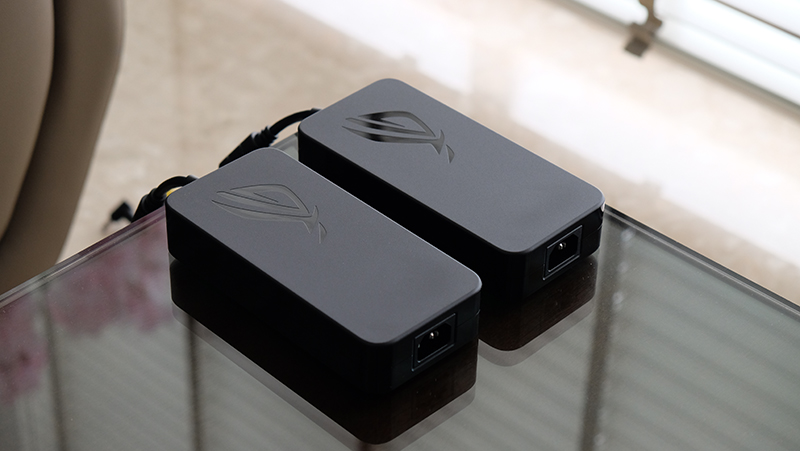 This really raises the question as to what the ROG Mothership is really for. Why make a laptop look like a 2-in-1 system if you can't actually use it that way? I think a big part of the answer lies in the cooling design. For starters, the keyboard remains super cool at all times, because all the key components are housed behind the display. Furthermore, the chassis sits upright, which means that the intake vents have access to better air flow and aren't blocked by the table as they normally would be. 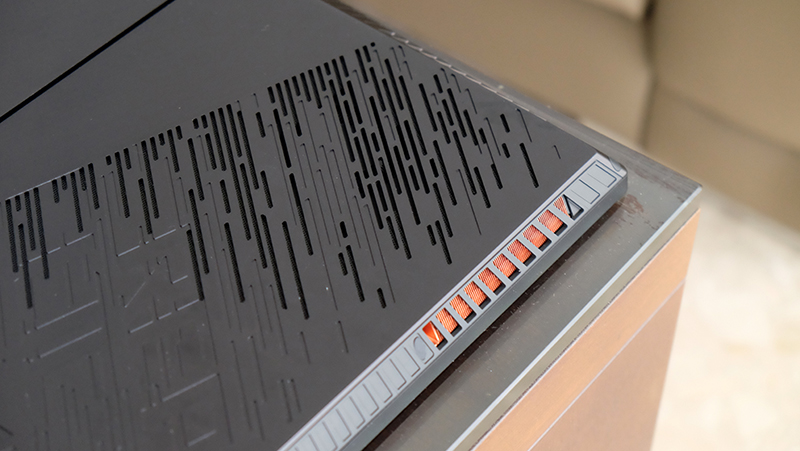 On top of that, ASUS is using Thermal Grizzly's Conductonaut liquid metal on its CPU, which further helps improve heat dissipation. That's really important, since the CPU is a hexa-core Core i9-9980HK that supports overclocking. There's also an internal fence around the CPU that prevents the liquid metal from leaking out over time, since it's electrically conductive.

All that heat needs somewhere to go though, and the Mothership features no fewer than eight heat pipes that transfer heat to four heat sinks located at the edges. ASUS says the heatsinks are comprised of 375 ultra-thin 0.1mm copper fins, which gives a total surface area of almost 200,000mm². The heat pipes also cover the CPU, GPU, VRM, and graphics memory, which takes care of all the crucial heat-generating components.

There are other benefits to the standing design too. The air intakes are exposed to less dust this way, but ASUS has also included anti-dust tunnels that catch particles entering the cooling system and blow them back out.

For what it's worth, ASUS did the best it could with an impractical design. It wanted to show that it had the engineering chops to switch up the idea of what a gaming notebook could be, and it's done that quite well. Whether or not it should have is a question for another day. 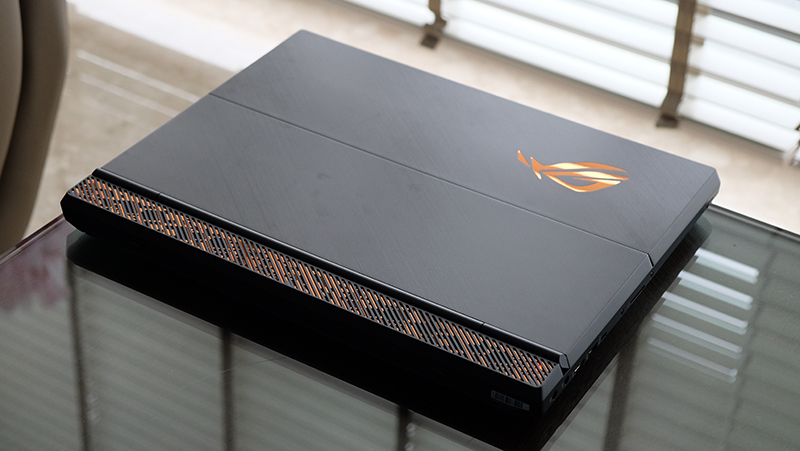 Build quality is great, and everything feels really solid, down to the kickstand and keyboard. The Mothership's machined aluminum chassis is impeccable, and there's virtually no give anywhere. The same applies to the keyboard, which interfaces with the display via magnetic anchors and pogo pins. It can even be detached and folded over to work as a 2.4GHz wireless keyboard. The keyboard is made of aluminum too and there's no flex to it either. The hinge could be smoother, but there's a reassuring resistance to it that ensures it never feels flimsy. It snaps onto and off the display without much hassle, so it's a breeze to switch to wireless mode and back again. Alternatively, the keyboard has a USB-C connector too that will let you use it in wired mode away from the display. 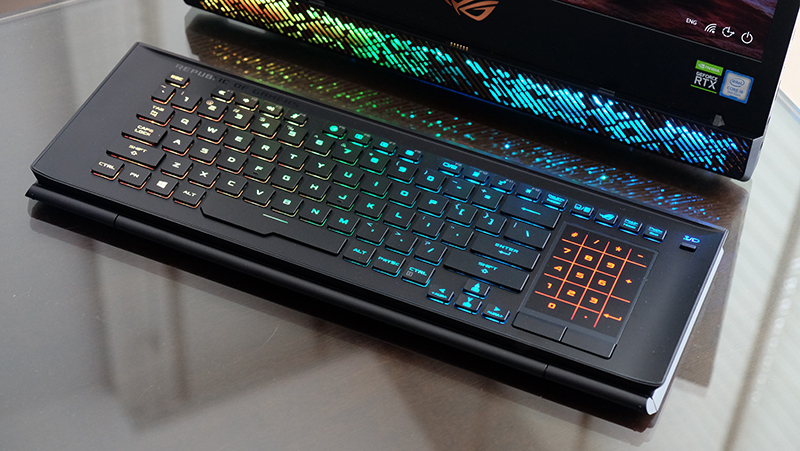 The keyboard is pretty nice to type on too. ASUS says the keys have a 2.5mm travel distance, and that's quite obvious once you lay hands on it. There's good key travel and feedback, and it also has a trackpad that doubles as a digital number pad on the right. Of course, there's support for per-key RGB customisations too from within ASUS' Armoury Crate software. The LEDs are bright enough and visible under direct overhead lighting, but they do suffer from clearly uneven lighting, particularly on the keys with secondary legends. 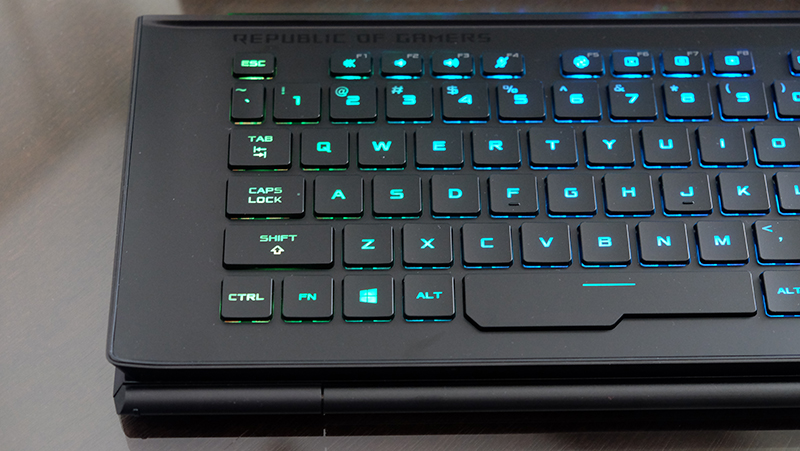 With such a large and heavy 17.3-inch screen though, it's probably not the best idea to have a kickstand you can fiddle with, so ASUS made this part very simple. The kickstand has a stepless hinge – press the bottom edge of the screen on your desk and it pops right out with no adjustments required. Alternatively, you can flip the kickstand out too. The kickstand can be pushed slightly further back as well, in case you want the screen to sit at a gentler angle. No need to worry about the display sliding around and getting scratched, or possibly scratching your table, either since there's a nice rubber strip at the base that makes sure it stays in place. 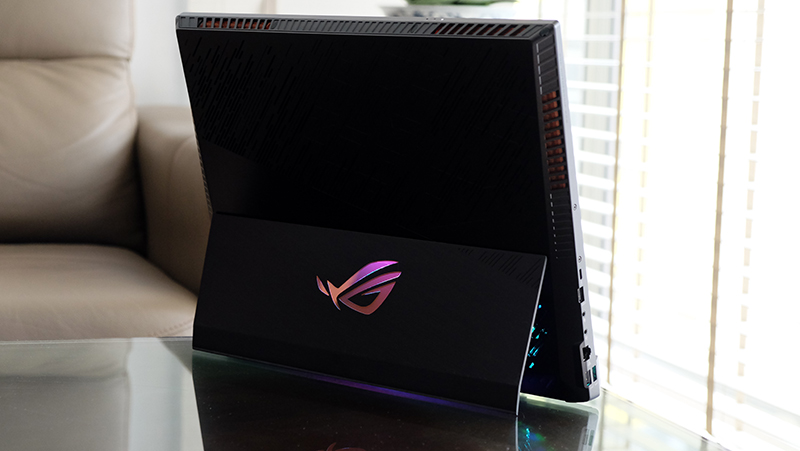 On the hardware front, the Mothership has just about everything you could want on a laptop. It is packed with the most powerful components you can squeeze into a laptop today, comprising an overclockable Intel Core i9-9980HK processor, 64GB of DDR4-2666 memory, an NVIDIA GeForce RTX 2080, and three 512GB PCIe M.2 SSDs in RAID 0.

It also has a large 90Wh battery, which delivers surprisingly alright battery life – for a machine of the Mothership's size and power that is – when paired with NVIDIA's Optimus technology. 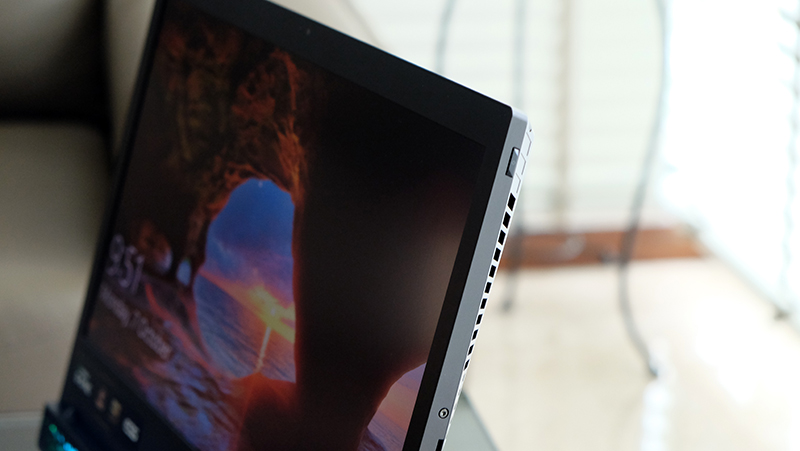 The 17.3-inch 4K IPS display has a 3,840 x 2,160-pixel resolution and supports NVIDIA G-Sync, which should mean a smooth and tear-free gaming experience. However, the refresh rate is capped at 60Hz, a pity for such a powerful resolution. I'd have gladly traded the 4K resolution for a more modest 1080p screen and a higher refresh rate. Furthermore, the Mothership is factory-set to Optimus mode, which means G-Sync is disabled at first. You'll have to enter the Armoury Crate software and switch the GPU Mode to Discrete Graphics to have access to G-Sync. This also requires a restart of the entire machine. 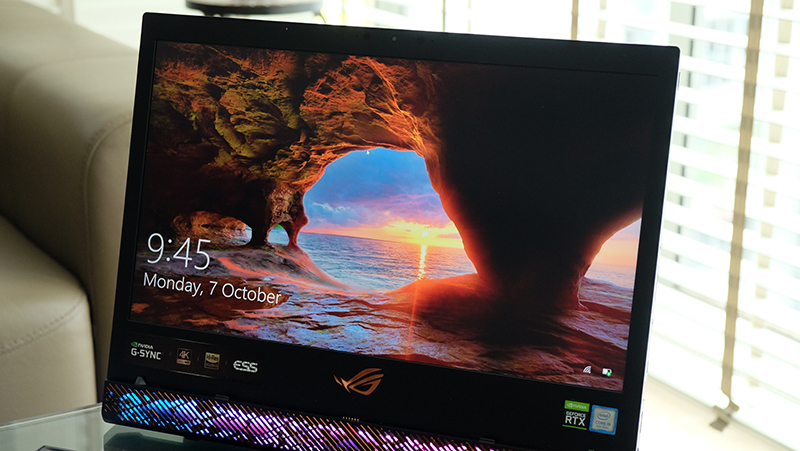 ASUS is also claiming 100 per cent coverage of the Adobe RGB colour space, which seems like good news for photographers and video editors. I didn't test this out for myself, but the display appears rather lacklustre, perhaps due to its middling brightness. It just seems a little too dim, especially for such a high-end machine. That said, viewing angles are good and colours appear accurate with no obvious bias toward either end of the colour spectrum.

Finally, there are the speakers, which is a 4W four-speaker array at the bottom of the display. The speakers are visible through the lighted grilles at the bottom, and they're capable of pumping out fairly loud tunes. However, they're not particularly impressive and end up sounding slightly hollow. They're powered by a Sabre ESS DAC and support 7.1-channel virtual surround sound, but you're probably better off sticking with just regular stereo.

There's one big flaw in this design though. When the keyboard is attached to the display, it sits over the speakers, which ends up muffling the sound a fair bit. If you want the best possible sound, you should use the system with the keyboard detached.

The Mothership also comes stuffed full of ports and connectors. Here's a list of everything it's got:

The two power connectors sit on the right, making for an almost laughable look when they're both plugged in. 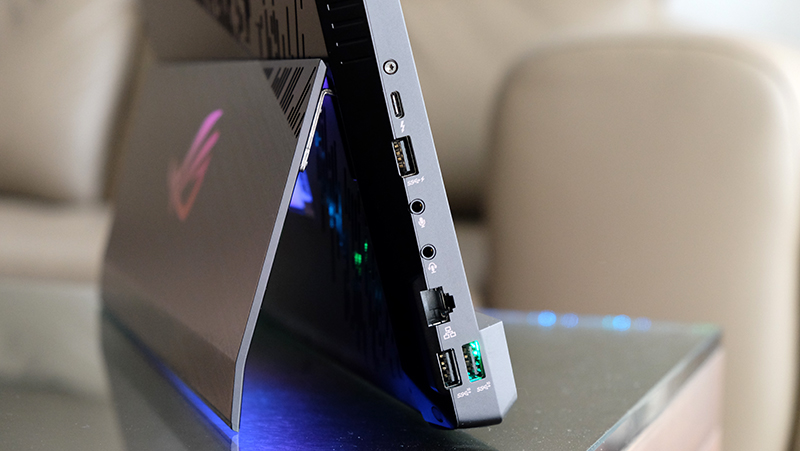 The Thunderbolt 3, HDMI, and DisplayPort outputs will support a total of three external monitors between them, so you could make the Mothership the heart of your next workstation. 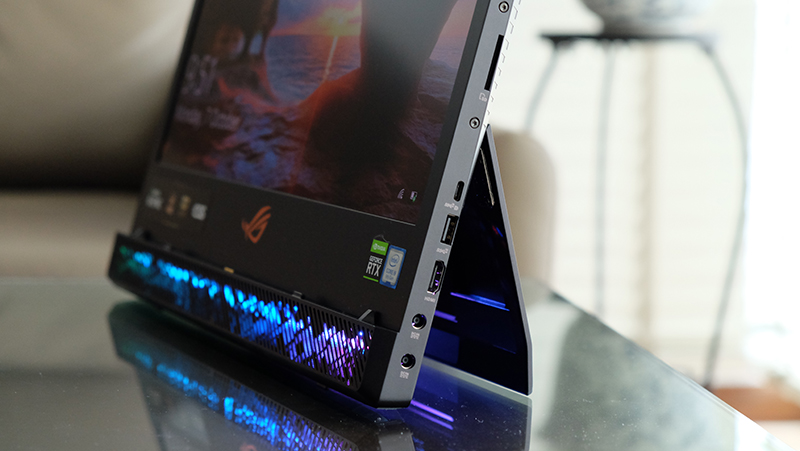 On the networking front, the Mothership is equipped with an Intel Wi-Fi 6 AX200 module and a Realtek Gaming 2.5GbE Family Controller, which means support for the latest Wi-Fi standard and faster-than Gigabit Ethernet speeds.