We have tested the ASUS ROG G501 using our usual suite of benchmarking utilities and games. For comparison, we will be including results from other 15-inch machines such as the Aftershock W15 and SM-15. And to see how the GeForce GTX 960M fares against the heavy hitters, we have included results of the ASUS ROG G751 and Gigabyte P35X V3, which are equipped with the NVIDIA GeForce GTX 970M and GTX 980M respectively.

Here is the list of benchmarks and games used for testing:

And here are how the notebooks stack up against each other.

Despite having a slightly quicker processor than the HP Omen, the ASUS ROG G501’s scores on PCMark 8 is best described as erratic, especially on the “Work” scenario where it managed just 3315 points - some 27% behind the HP Omen. Then again, the Gigabyte P35X V3 also had problems with this particular scenario and its specifications are also very similar to the HP Omen. On a whole, the ASUS ROG G501 consistently trailed the HP Omen and this should not be the case. If it’s any consolation, PCMark 8 is only a synthetic benchmark.

However, the important thing to note here is the gulf in performance between the GeForce GTX 960M and the GeForce GTX 970M. The ASUS ROG G751, which is powered by the latter, was over twice as quick on “Normal” and a whopping 85% faster on “High”.

Finally, looking at 4K gaming performance, it is clear that the GeForce GTX 960M is not quite up to snuff. At 4K resolution, the ASUS ROG G501 managed just 23.4fps on “Normal”. The GeForce GTX 980M in the Aftershock W-15, however, was more than capable, posting well above 30fps on both settings levels. 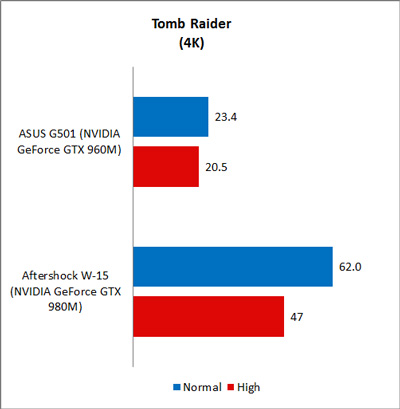 On Shadow of Mordor, the ASUS ROG G501 posted significant leads over the HP Omen and was about 11% quicker overall across the two settings. However, the ROG G501 trailed the Aftershock SM-15 by around 9%. Again, the gulf in performance between the GeForce GTX 960M and the GeForce GTX 970M is clear to see. Overall, the ASUS ROG G751 was around 80% faster than the ROG G501.

Expectedly, given the intensity of Shadow of Mordor, 4K gaming performance of the ROG G501 was dismal as it managed just around 11fps. It wasn’t much better for the Aftershock W-15 and its GeForce GTX 980M and it barely managed 31fps on “High” settings. 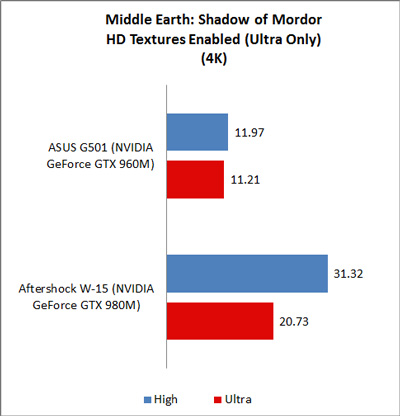 The ASUS ROG G501 features ASUS’ Hyper Cool technology which includes dual independent fans and copper heatsinks for better cooling performance. The idea is to quickly draw heat away from the keyboard area (where the CPU and GPU typically reside) so that gamers can play more comfortably.

In our tests, we found that the ROG G501’s GPU-Z temperature was on the high side. At 79 degrees Celsius, this means that the ROG G501 is over 12% warmer than the 15-inch HP Omen and Aftershock SM-15. Even so, the ROG G501 recorded the lowest surface temperatures on average, but then the other two competing 15-inch notebooks were only just very slightly warmer. The Gigabyte P35X V3 recorded the highest temperatures as it crams a high performance GeForce GTX 980M mobile GPU into a chassis that's only about 21mm thick.

The ASUS ROG G501’s battery life was 233 minutes, which is very nearly 4 hours and impressive for a gaming notebook. Even the second placed Gigabyte P35X V3 was nearly an hour behind. The reason for the ROG G501’s amazing battery life can be attributed to the size of its battery, which is a whopping 96Wh - even greater than that of the ASUS ROG G751 which is a larger 17-inch notebook.

Diving deeper, we can see that its power consumption was measured at 24.72W, which is over 30% better than the HP Omen, but over 9% more than the Aftershock SM-15.

Our Portability Index factors in battery life, weight and volume so you can see which notebook is the most worthwhile to carry around. And bearing in mind the ASUS ROG G501’s slim dimensions, manageable weight and long battery, is it any wonder that it scored the highest amongst all the gaming notebooks? Its ratio of 0.889 is over twice as good as the HP Omen and Aftershock SM-15, and only the thin and light Gigabyte P35X V3 came close to challenging it.