ASUS is certainly a big player in the mobile computing market as they've had first-mover advantage in the netbook and tablet product categories. However, the same can't be said in the mobile phone market with their scant presence. While they made pretty notable inroads with their Garmin collaboration which spun off touch screen phones such as the Windows Mobile 6.5-equipped Garmin-Asus nuvifone M10, the Android-powered Garmin-Asus A10 and Garmin-Asus A50, that was probably their high-point. Ever since their change of strategy to sell ASUS-only branded devices, we've yet to see anything noteworthy from the company. Instead, we're re reminded of their old in-house designed QWERTY phones like the M530w and M930.

Nonetheless all this is set to change for ASUS as it brings forth one of its most prized mobile devices, the PadFone, which was unveiled at Computex 2011 and last seen at Mobile World Congress 2012 where we had our first real hands-on. While it may seem to be just another Android smartphone in the market, the PadFone actually has some nifty tricks up its sleeves to surprise the unsuspecting consumer. What's unique about the PadFone is its ability to dock itself and power a 10.1-inch tablet accessory, known as the PadFone Station. The combination can be attached to yet another accessory, the Station Dock, which is essentially a keyboard docking station that doubles as an extra battery pack. Here's a very quick video overview to see how this works:-

The transformational concept isn't new as ASUS has pulled it off rather elegantly on its Eee Pad Transformer, Transformer Pad Prime, Eee Pad Slider and Transformer Pad TF300. While the concept was well received in the tablet realm, can ASUS replicate the same success on the smartphone front? That's what we intend to find out. We'll be focusing on how the three parts of the device work together, but first up is a quick diagnosis of the smartphone quotient with the PadFone :

The ASUS PadFone has the hallmarks of a modern Android smartphone - a plastic chassis, slim, rounded corners and a sizable 4.3-inch Super AMOLED display. In our hands, the PadFone feels quite solid despite its slender weight of 129 grams.

Its 9.2mm side profile sits comfortably in the middle of the competition; it is a hairline thinner than the Apple iPhone 4S (9.3mm) while measuring 0.3mm thicker than the HTC One X (8.9mm) and Samsung Galaxy Nexus (8.9mm). The PadFone edges out its closest rival, the Motorola Atrix 2, which is rather thick by today's standards at 10.4mm. 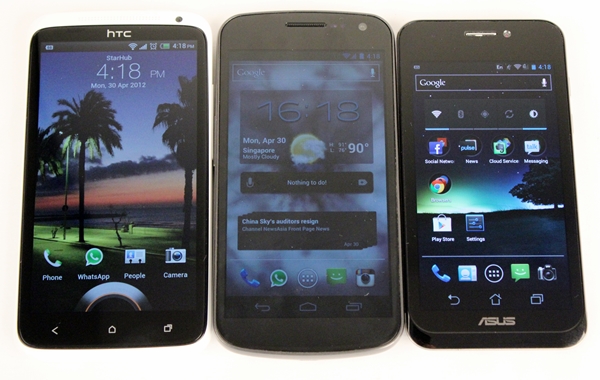 The standard suite of connectivity options can be found on the PadFone: micro-USB port, micro-HDMI port, 3.5mm audio output jack and microSD memory card slot. To access the memory card slot, you have to remove the battery cover. This may be inconvenient for some who often swap memory cards.

You will find the 8-megapixel rear camera, LED flash and speaker grille at the back of the PadFone. As there is no cover protecting the camera lens, it is recommended that you take extra caution when placing the PadFone on any surface to avoid scratching the lens. 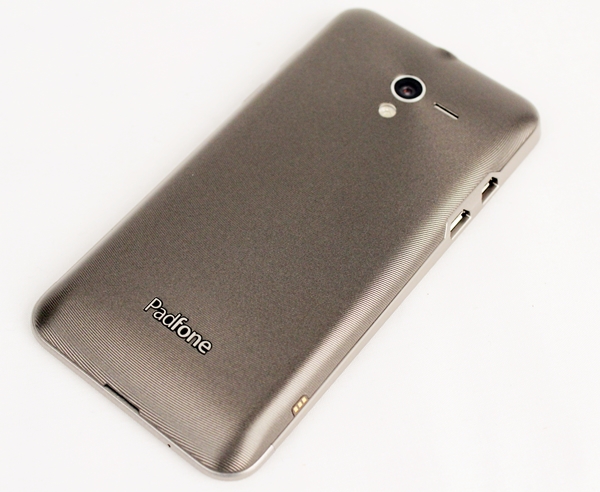 Keeping to its track record of delivering products with the latest software, the ASUS PadFone ships with Android 4.0 Ice Cream Sandwich out of the box. While HTC and Samsung like to toy around with the stock Android user interface (UI) and add on new features, ASUS opted to keep most of the UI intact with some minor additions.

The screenshot above on the left shows the PadFone sporting a familiar lock screen of the stock Android 4.0 UI where you can choose to unlock the phone by swiping right or activating the camera by swiping to the left. On the right is the screenshot depicting the ASUS PadFone running on Android 4.0.3, one of the three phones besides the Samsung Galaxy Nexus, HTC One X and One V, running Ice Cream Sandwich out of the box. 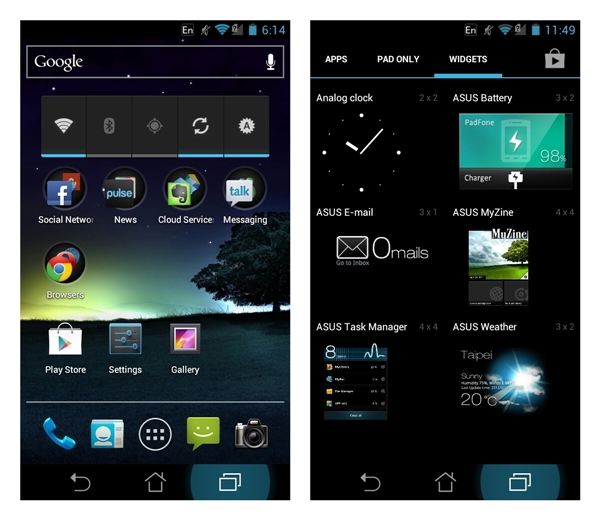 ASUS kept the look and feel of the stock Android 4.0 UI as seen in the screenshots above. However, it adds several of its own widgets such as ASUS Weather and Battery widgets (right). Having more widgets provides users with more customization options for their five home screens.

ASUS also added an extra column, "Pad Only", on the top bar in between Apps and Widgets to house Pad only apps (right). For example, you can drag a tablet-specific app like News 360 for Tablets from the App List onto the home screen and to the top right hand corner of the display where there is an option to add "Pad-Only app tag". After tagging it, the app will appear in the Pad Only tab. Similarly, you can remove the app from the Pad Only list by dragging it out from the tab onto the home screen. 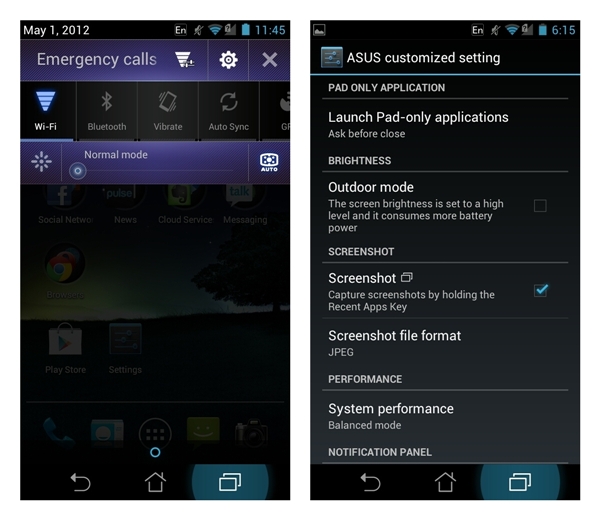 Another aspect where ASUS made changes to the stock UI is the pull-down notifcation tab (left). Besides giving you an overview of the notifications, ASUS supplements it with a row of quick settings to toggle, which includes the shortcut to toggle the outdoor mode to tune up the brightness for outdoor usage.

There is also a special customized settings under the Settings tab where you can enable several ASUS-exclusive features such as taking screenshots by holding the Recent Apps key and switching between the three system modes (Power Saving, Balanced and Performance).

Write a Review
Compare This | Specifications
Great overall performance
Good design and handling
Beautiful Super AMOLED display
Back cover gets warm easily
Camera performance not up to expectations
Accessories not very practical
Our articles may contain affiliate links. If you buy through these links, we may earn a small commission.
Sponsored Links