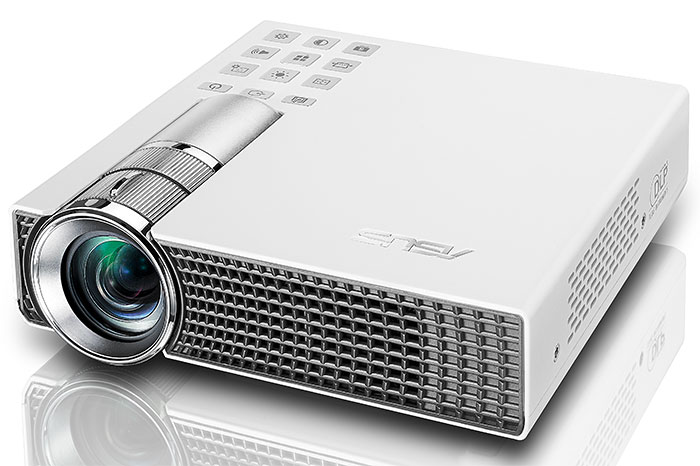 Until we reach the limits of miniaturization at atomic levels, hardware manufacturers will continue to push for smaller electronic devices. Just look at all the recently announced smartphones, tablets, notebooks, and wearables: not only are they smaller, they also do more than the models they replaced.

For traveling salesmen especially, this trend of miniaturization can only be good news. For example, with Ultrabooks, gone are the days when they needed to lug a bulky and heavy laptop everywhere they went. Today, many have even chosen to leave their laptop behind in the office because they’ve found ways to conduct presentations with their mobile device. For this group of people, it’s no hyperbole to say that it’s the projector and not the laptop in their briefcase that’s now breaking their shoulders.

Of course, the projector industry isn’t standing still either. Mini projectors have gotten increasingly popular this last couple of years, primary due to their super-small footprint and light weight. What used to require two bags (one for the projector, one for the laptop) now only requires one; not to mention there are those that are petite enough to fit into a coat’s pocket. While they may not be as bright or possess a picture quality as good as a regular office projector, for ease of presentation on the go, and when the audience size is small (say, up to 10 people), they are usually more than up to the task.

The ASUS P2B we’ve here is a portable DLP projector that uses LEDs as its light source. This combination is favored by mobile projector makers and users alike because the end result is a projector that requires very little to no maintenance, since there’s no lamp or filter to replace. In addition, LEDs have a much longer lifespan than traditional lamps. The P2B is rated at 30,000 hours, which is way longer than the 2,000 to 5,000 hours we commonly see in lamp based projectors. Put another way, even if you were to use the P2B for seven hours every day, it’ll last you more than 16 years.

Other specs of the P2B include a WXGA (1,280 x 800) native resolution, a brightness rating of 350 ANSI lumens, a footprint slightly larger than a CD jewel case, and a weight comparable to the recently revived 4th-gen iPad. It offers a good set of connectivity options too, including HDMI (that supports MHL) and mini-VGA. Of course, since most mobile devices don’t come with a full-size HDMI output, a converting cable or adapter is needed. For iOS, it can be something like Apple’s very own Lightning Digital AV Adapter; for Android, be sure to find a MHL adapter that works with your device. One nice thing is that the P2B will top up the charge of the connected MHL device, so there’s no worry that it’ll run out of juice in the middle of a presentation.

While we posit mini-VGA is chosen over the regular (but bigger) VGA connector to keep the size down, this also means there’s an additional mini-VGA-to-VGA cable to toss into the bag. A microSD card slot and a USB 2.0 port are also present at the rear panel, giving you the options to conduct presentations sans a PC. And while it’s not immediately apparent, the P2B also comes with 2GB of onboard storage, which you can easily get to by connecting the projector to your PC using the supplied micro-USB cable. 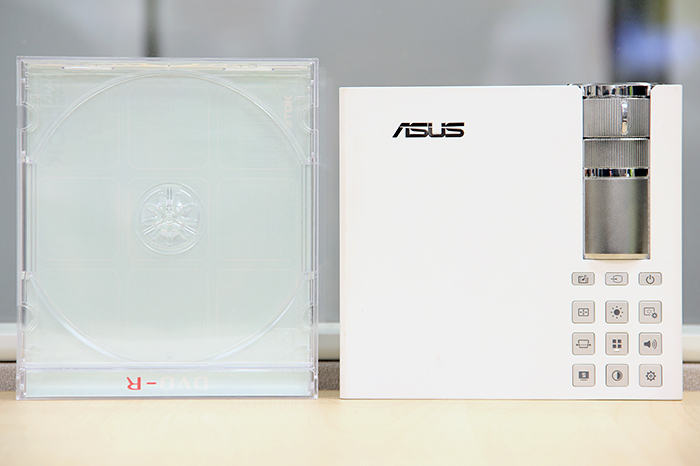 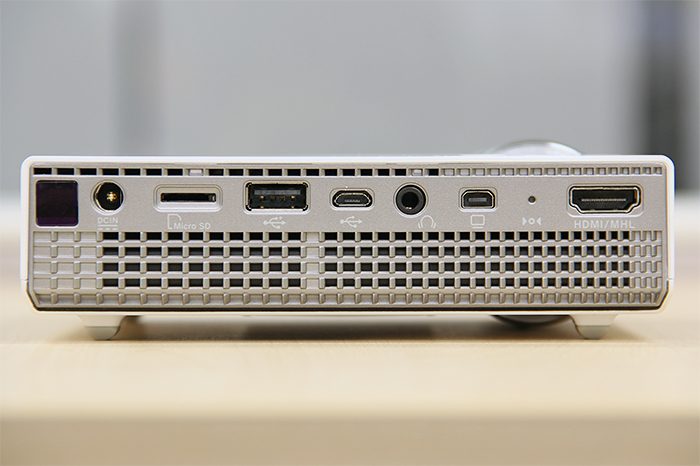 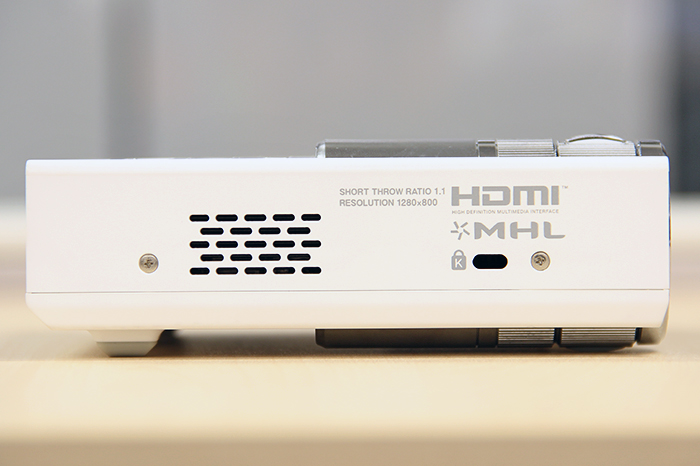 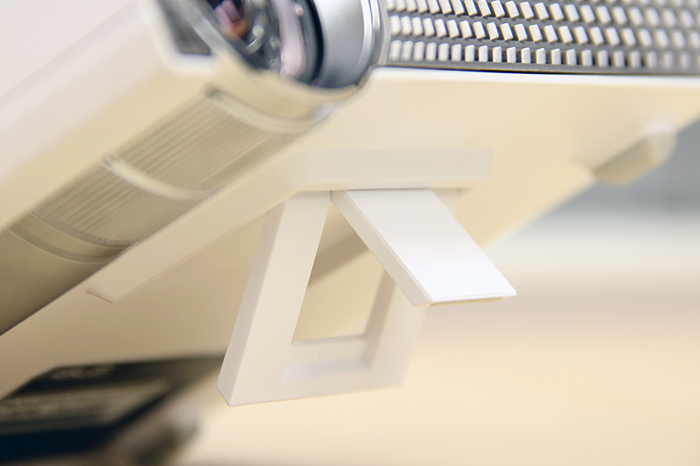 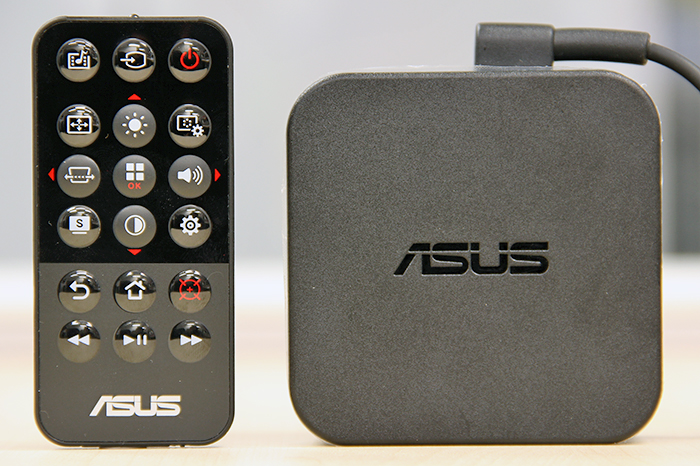 Getting the P2B up and ready is fast and easy. It powers up (and shuts down) fast (under five seconds), the auto signal detection works, and the auto keystone correction only takes a second or two to straighten an angled projection. The only user intervention needed is to adjust the focus ring to try to get the sharpest image. The zoom-less P2B has a short throw ratio of 1.1:1, which means you don’t need a very long distance between it and the screen to get a decent-sized image. In this case, a 42-inch projection only needs 1m. A 120-inch projection requires slightly less than 3m, but that’s pushing it for a 350-lumen projector. 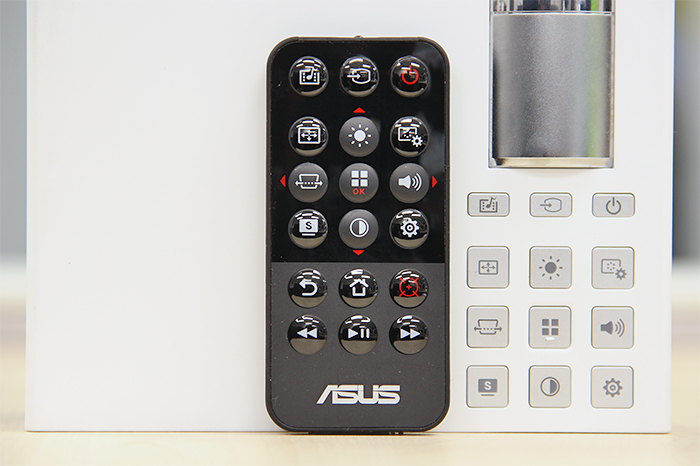 With this in mind, it’s easy to understand which scenarios the P2B (or any other mobile projector) works best under. One, if you’ve pretty strong ambient light (e.g., curtains undrawn, room lights turned on), it makes no sense to try to do a giant 120-inch projection. The image will be overwhelmed by the ambient light and will look washed out. Instead, reduce the projection size by going nearer to the screen. This reduces light fall-off, and while colors may still look pale due to the ambient light, the image quality should be much better now. In the P2B’s case, we’ve had good results anywhere between 42 and 50 inches in a brightly-lit meeting room in our office. Coupled with its great portability and built-in battery, it's not difficult to see that the P2B will also work well in confined places, like a coffee shop. Presentations can take place literally anywhere as long as there's a flat wall.

If you've control over the ambient lighting, the P2B can project an image quite a bit bigger. Most of our tests were conducted in a dimmed room and with a screen size of 60 inches. In our opinion, the greatest strength of the P2B is its built-in media center function, which plays videos, music, photos, as well as documents. In other words, it's entirely possible to ditch the laptop and just load all your presentation materials onto the projector's internal storage. The media center also launches automatically when it detects an external USB drive or a microSD card. Otherwise, you can press the Media Center button that's on the remote control or the projector's top panel. 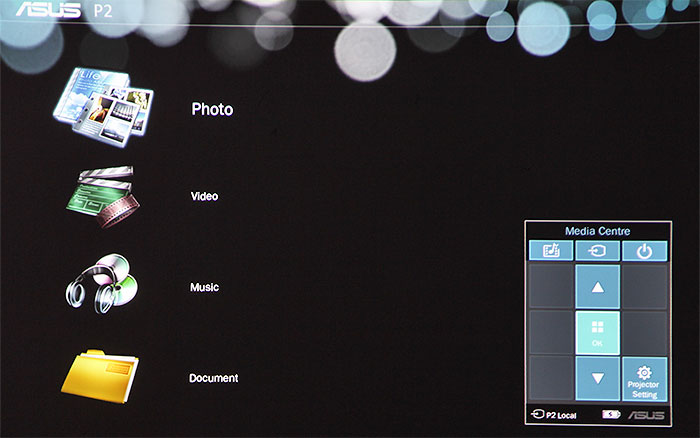 For the most part, the P2B displayed good colors. You can adjust brightness, contrast, and choose from a list of seven picture modes (Black board, White board, Dynamic, Scenery, Theater, Standard, sRGB). To get anywhere near the claimed 350 lumens, Dynamic mode is the way to go. Both Standard and sRGB modes produce fairly neutral grays; but if you want your images to pop or take on a warmer tone, you can try Game or Theater mode. Likewise, video playback quality was decent; the ability to quickly play short clips in between presentations more than makes up for any image quality deficiencies (e.g., the less than stellar contrast).

Text quality is more of a mixed bag, however. At 42 inches, text wasn't very readable at small sizes. Enlarging the screen to 60 inches (which now gave bigger text) and sitting about 2m away from the screen improved readability considerably. We did try 80 inches, and the corner softness became quite obvious. Either way, we feel that text could have been sharper. Feeding the P2B a signal that's the same or close to its native 1,280 x 800 pixels resolution will help to alleviate a bit of this problem; but considering that most recent laptops and Blu-ray players output at full HD (the P2B accepts up to 1080/60i over HDMI, and 1,440 x 900 over HDMI for PC and mini-VGA), we consider this loss of sharpness during scaling the main weakness of the P2B. 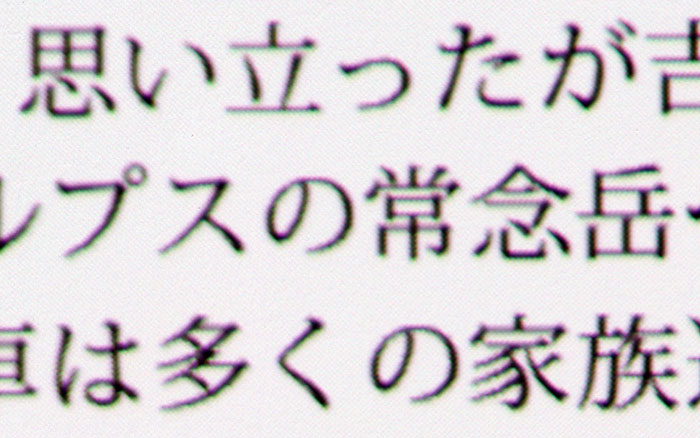 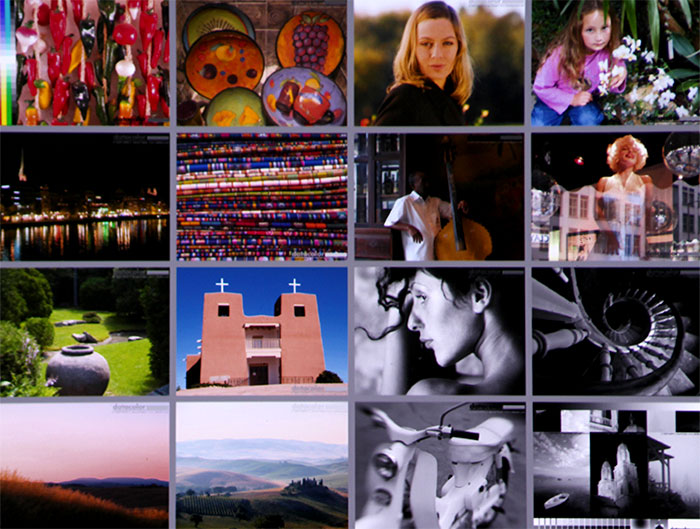 Like many other palm-top projectors, the ASUS P2B trades brightness for ease of use and great portability. It offers a solid set of input choices (no Wi-Fi option though), and even manages to top that by incorporating a full-fledged media player. From a convenience standpoint, it's hard to take points away from the P2B.

While the P2B isn't the brightest in its class, it's bright enough for smaller screen sizes (typically in places where space is a premium), and especially in a reasonably dark room. Overall, we'd say that its data and video image quality is more than acceptable. Yes, there's some text softness but we see this a lot in other mobile projectors too. On a separate note, the P2B's 1.5W speaker didn't feel underpowered to us, which is a common issue in other models.

Whether you're a businessman who always goes around conducting presentations and therefore needs a personal portable projector, or a home user looking for an option to get a reasonably big screen in a confined space to play your mobile games, the ASUS P2B is well worth considering if you're willing to part with S$739. If you need higher light output, the internal battery-less ASUS P2M is rated at 500 lumens, but costs a hundred dollars more.

Write a Review
Compare This | Specifications
30,000-hour LED lifespan
Read AV and presentation files from USB storage, microSD card, and internal storage
HDMI/MHL support
Slight text softness
Fan noise can get quite loud
No Wi-Fi dongle option
Our articles may contain affiliate links. If you buy through these links, we may earn a small commission.
Sponsored Links