Apple hikes prices of products in Japan by as much as 25%, unlikely to happen in Singapore (for now)
Product Listing
AcerAftershockAlienwareAorusAppleArchosASUSAxiooDellDopodDreamcoreFujitsuGatewayGigabyteHandiiHPHuaweiLenovoLGMicrosoftMSINECNEOPanasonicRazerSagerSamsungSonySuzukiToshibaViliv

ASUS has channeled considerable resources to raise their N-series notebooks to superstardom status of late. To begin with, the Taiwanese CE maker has paired up with Jay Chou to create a spinoff of the original N43SL entertainment notebook and was showcased at a glitzy media event held in Taipei. More recently, we've also received word that ASUS has been rubbing shoulders with Jason Mraz, Andy Morahan and Don McCullin for their "In Search of Incredible" global marketing campaign, primed mainly for the N45SF model bundled with its own SonicMaster subwoofer. What about Jay's protege? For all its celebrity hype, is the Jay Chou Special Edition (we'll call it JCSE for short) better than its predecessor? 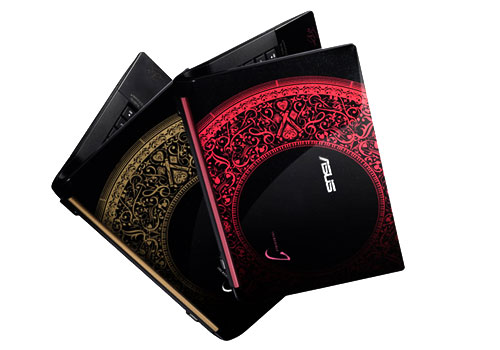 At its heart, the JCSE is an aesthetical makeover of the silver N43SL edition launched earlier this year. It is laudable, in that Jay Chou himself has invested a great deal of heart and soul into the JCSE's design, such as the Chinese porcelain motifs and little artistic nuances inspired by his music and personal tastes. Retailing in red or gold variations, ASUS has chosen to stack the JCSE with a more conservative hardware compared to the preliminary N43SL. For instance, while ASUS is still offering Intel's Sandy Bridge Core i5 and i3 processors with the JCSE, the quad-core Core i7-2630QM has clearly been left out of the equation. Apart from that, most of its hardware remains status quo, including the discrete NVIDIA GeForce GT 540M GPU as well as speakers developed by the Bang & Olufsen ICEpower team. It's time now to check out the JCSE's construction before we scrutinize its performance benchmarks.