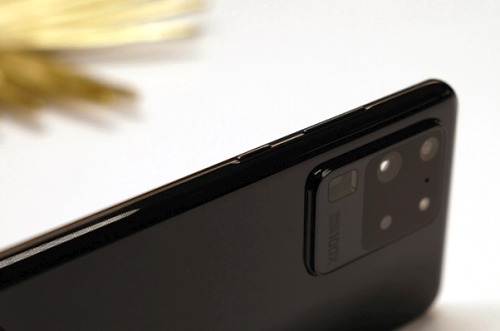 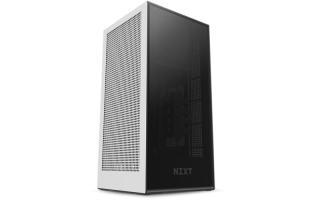 The NZXT H1 is a stunning mini-ITX chassis

ASUS Mars 760 - Pairing Up for Performance

ASUS Mars 760: Pairing Up for Performance

After a long hiatus, ASUS has revived the company's prestigious Mars dual-GPU graphics cards series. The ASUS Mars 760 is the latest addition to the lineup featuring dual GeForce GTX 760 GPUs sandwiched on a single PCB with each GPU having a dedicated 2GB of video memory (a grand total of 4GB). It also carries the Republic of Gamers branding; hence, the card's familiar red-and-black color scheme. It goes without saying that ASUS is once again the first to push their engineering prowess to bring about a unique graphics card to the market, but is their efforts worthwhile and will we recommend this over a faster single GPU card? That's what we intend to find out in our quick review. 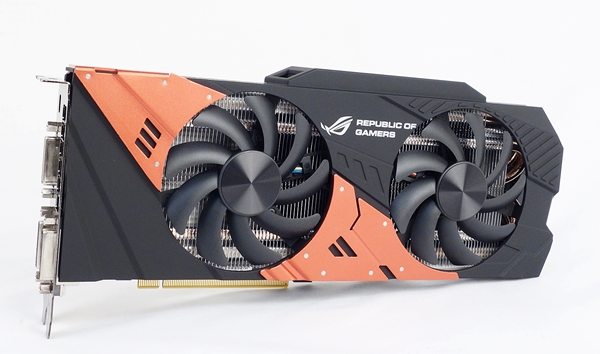 On first impressions, this new addition to the Mars series seems a little subdued. Usually, Mars cards have a pair of top-end graphics cores, in the likes of the Mars II or Mars III. We can only second guess ASUS's decision to put two mainstream, overclocked GeForce GTX 760 GPUs. Each GPU has a base clock of 1006MHz, compared to the default clock speed of a reference GTX 760 that is rated at 980MHz. Each core also has a boost clock of 1072MHz. Besides cramming two mainstream GPUs, the Mars 760 boasts of a number of high-end features. Starting with its cooling system, it sports a pair of 100mm cooling fans with fan hubs that prevent dust from gathering at the fan bearings. Coupled with the DirectCU II cooling technology, this card is touted to run cool, even with the card overclocked.

To support such an exercise, the card boasts of 12-phase power design that is backed by a slew of high-end components like its hardened chokes, black metallic capacitors and MOSFETs. The card also features ASUS' Digi+ voltage regulation module for stable power delivery, especially under load operation.

There are two dual-link DVI-I ports, and one DVI-D port, as well as a mini-DisplayPort port. A bundled DVI-to-HDMI dongle ensures that HDMI devices can still be used with the Mars 760 without needing you to hunt for one.

The rear of the card has an aluminum back plate that may offer some passive cooling to the PCB components. It also prevents the PCB from flexing too much due to the weight of the card's cooling system. We can also see the POSCAPs that are exposed by the cut-outs of the back plate.

Since we know what to expect in a traditional GeForce GTX 760 SLI setup, we've chosen to report on a subset of our usual benchmarks for our assessment of the ASUS Mars 760:-

Here's a look at how specifications of the ASUS Mars 760 stacks up against the competing cards:

From its gaming performance, we can witness the advantages of having more CUDA cores during graphically intensive situations that are represented by the Fire Strike Extreme and Crysis 3, with its 8x anti-aliasing setting. The Mars 760 actually pulled ahead of the GTX 780 Ti, the current most powerful single GPU gaming graphics card. On average, the Mars 760 is about 8% better than the GTX 780 Ti, and commands a 30 % lead over the AMD R9 290X. Against the GTX Titan, Mars 760 outperforms the former by roughly 18%. This is based on the more demanding tests from our testing subset. 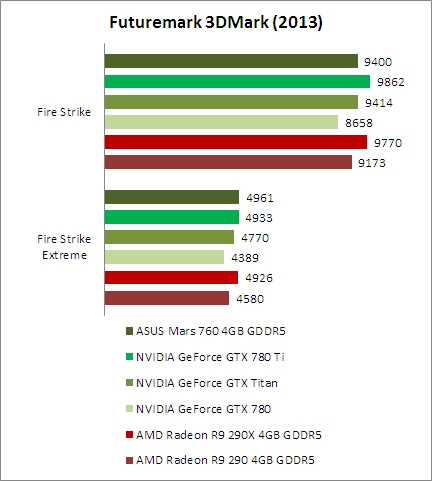 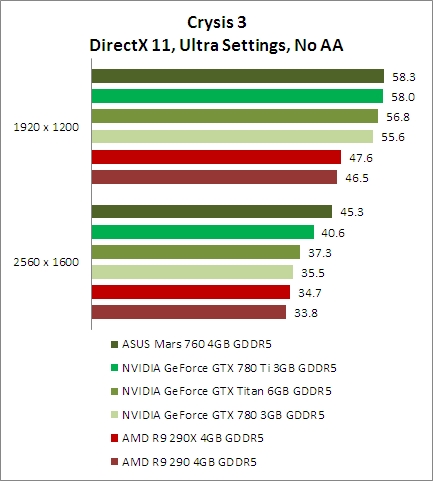 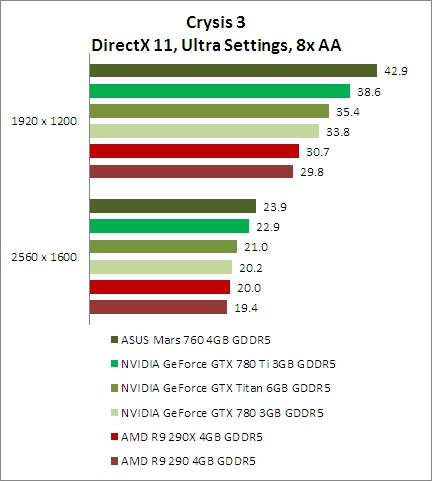 We were impressed by the cooling fans equipped on the ASUS Mars 760 as they were whisper quiet in normal operation. At 100%, they only registered noise levels of about 58dB. Under load conditions, the card was kept at a 'low' of 72 degrees Celsius, courtesy of card's cooling system and DirectCU II cooling technology. However, it was the high power consumption that had us worried. The Mars 760 registered the highest power draw of 520W, under load. Alas, the impressive graphics compute prowess of its dual-GPU system came with this price. Fortunately, it is not out of line and is more of the card's extreme performance that draws this much of power. For one, a single GPU GTX 760 already demands 350W total system power, so 520W total system power with two GPUs is not out of place. 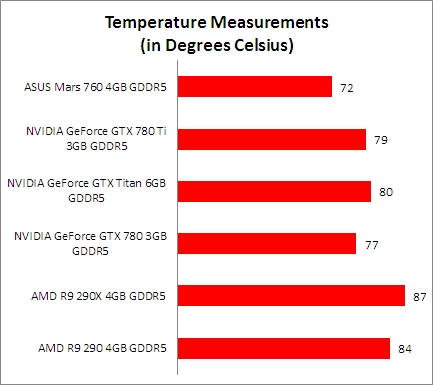 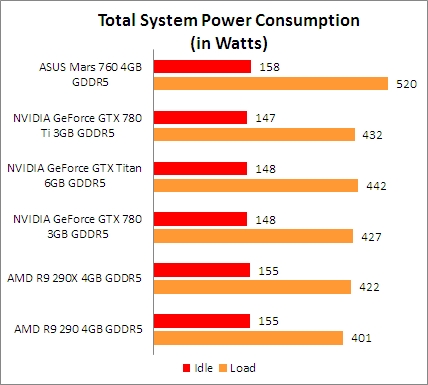 Despite its impressive performance against the top-end GeForce GTX 780 Ti graphics card, the Mars 760 is actually in line with the performance of a pair of GTX 760 cards in standard SLI configuration. What separates the Mars 760 from a typical graphics card setup is the engineering feat carried out to equip two GTX 760 cores onto a single PCB and the fact that the Mars 760 appears no larger than a standard single GPU product. To be exact, this dual-slot card measures 279 x 111 x 40mm.

The card also features high-end power regulation components as well as a 12-phase power design to support the efforts of overclockers and power users. As a departure from the normal of featuring high-end graphics cores like the Mars II and Mars III, perhaps the comparatively more subdued Mars 760 will have a price tag that is slightly easier on the pocket? Stay tuned to find out if the ASUS Mars 760 can entice upgraders when we get more information on its price and availability. 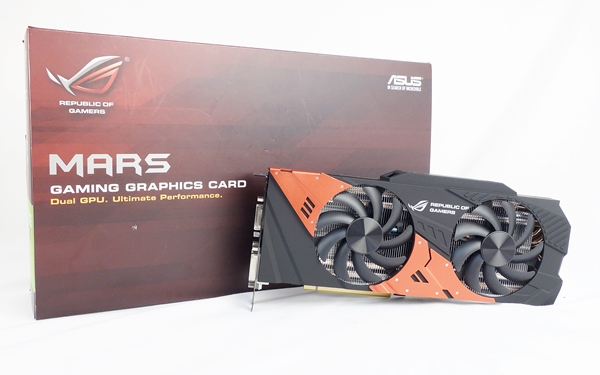 Not long after we published our article, ASUS has revealed a local retail price of S$949, which is in the ballpark of our estimate that it would be priced in the territory of a GeForce GTX 780 Ti card. As such, the Mars 760 does offer a viable option for gamers and system builders who are considering something out of the norm, with performance levels that are above the GTX 780 Ti. However, there are more considerations to keep in mind.

For one, if you're really looking for value for money options, buying two pieces of an identical GeForce GTX 760 model and operating them in SLI is a lot cheaper; in fact, you could save more than S$200 by checking current prices!

Beyond cost, there are other concerns such as performance scaling that may work out fine in most cases, but there's no guarantee that SLI will always work to give you twice the performance of a single GPU. Also, while the Mars 760 'boasts' of 4GB of memory and a 512-bit memory bus, these are just marketing statistics. In reality, you're still stuck with the limitations of a graphics card with a 2GB video memory and a 256-bit memory bus because that's how much each GPU can access dedicatedly. So for dollar to dollar, a GeForce GTX 780 Ti comes with more video memory for intensive gaming in higher details and resolution. The GeForce GTX 780 Ti is also a lot easier and more eager to overclock than trying to push the dual-GPU ASUS Mars 760. In fact, it could be tricky to get a sweet spot. Last but not least, you'll also have to put up with higher power consumption for performance that's not a greatly speedier than the GeForce GTX 780 Ti.

Having pointed out all of these aspects, if you want to walk the road less traveled, then the ASUS Mars 760 could be your choice companion. According to ASUS, the card will go for sale from 15th December.