Note: This review was first published on 28 February 2022. 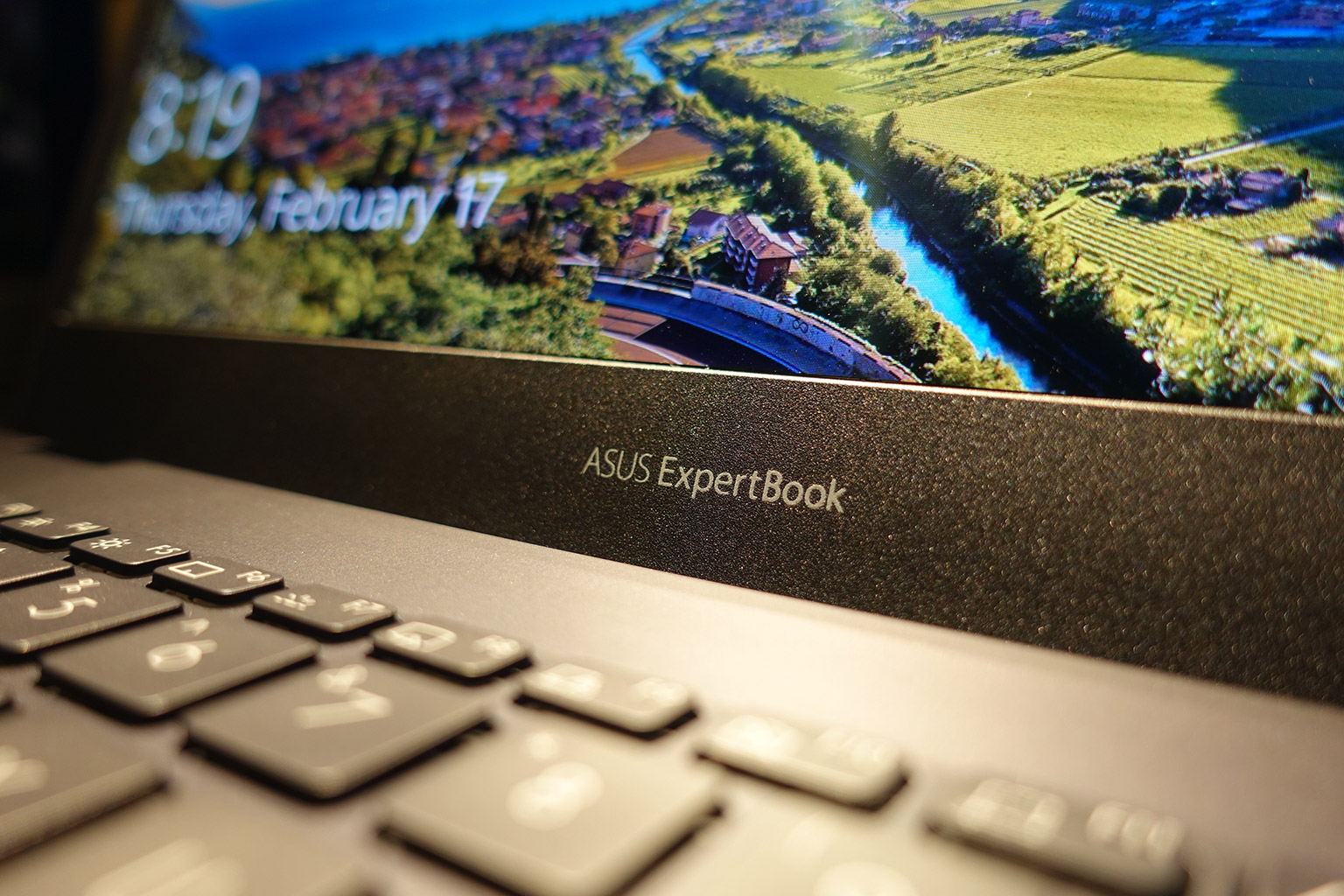 Most of us should be familiar with ASUS’ two mainstream notebook series – the ZenBooks and the VivoBooks – as well as those from its gaming sub-brand, Republic of Gamers (ROG). Then there’s the ExpertBook professional notebook series, and as its name implies, is geared towards commercial and business users.

For those uninitiated, the ExpertBook's lineage has been around for quite a while and was formerly under the ASUSPRO branding for commercial products. The current ExpertBook series is heavily influenced by the ASUSPRO B9440 notebook back from 2017, which we liked very much, and many aspects of it are still present in successive models like the ExpertBook B9450 in 2020, all the way to today's model.

That brings me to today's article where I got to use the ExpertBook B5, on loan from ASUS for about a month, for my review and I’m here to share my experience with the latest of their professional series. 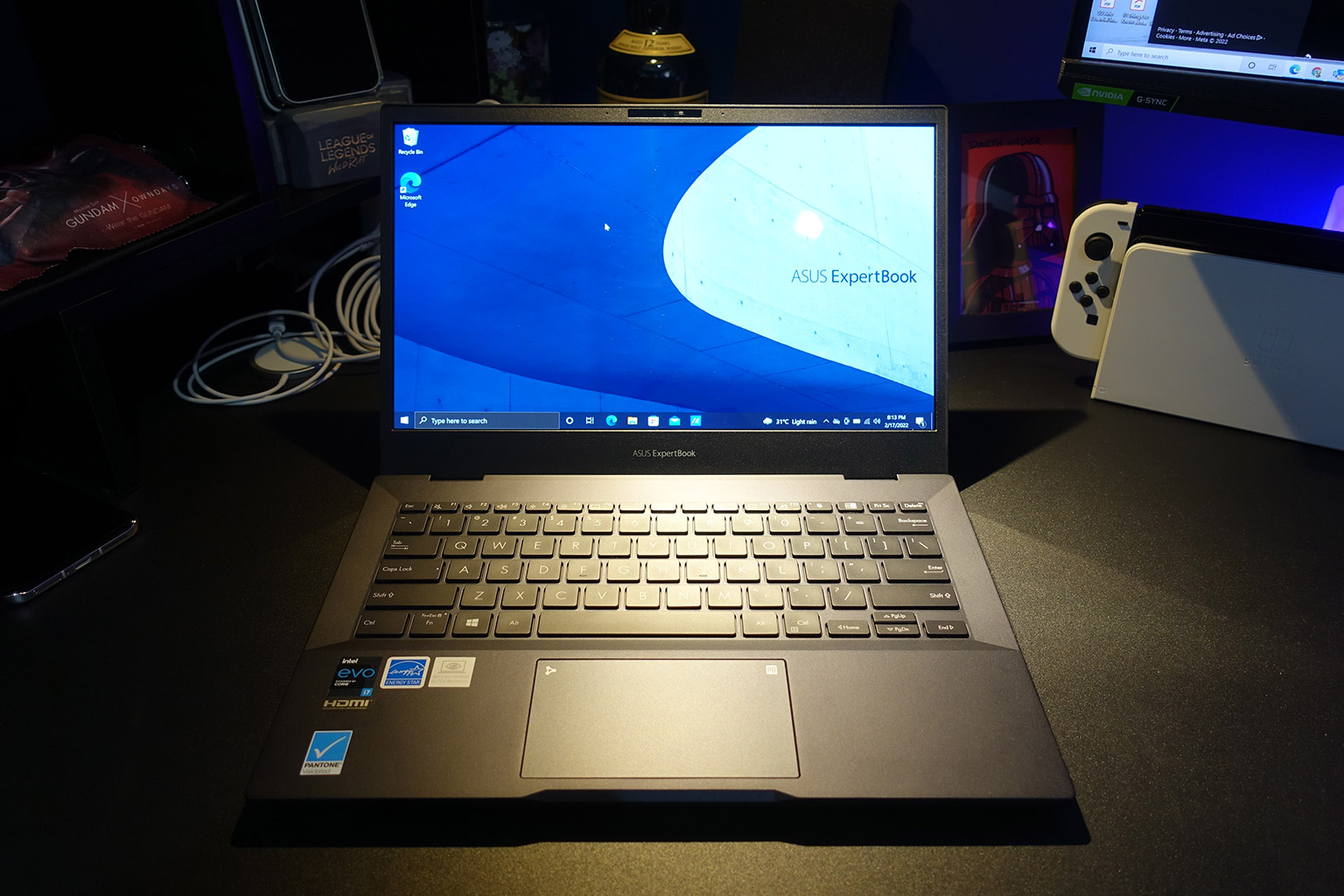 While the lines between gaming notebooks and those used for day-to-day productivity or content creation have blurred, especially over the past couple of years (any notebook that comes with a discrete graphics card can run most modern games), notebooks like the ExpertBook B5 have a higher emphasis on portability and battery life. That’s not to say they are slouches when it comes to performance. My review unit, for example, comes with an Intel 11th Gen Core i7-1165G7 (Tiger Lake) processor, 8GB memory, a Full-HD (1080p) OLED screen and Intel’s Iris Xe GPU to power it. That's more than enough for a typical productivity work pattern and some light photo editing. In fact, the notebook is also Intel Evo certified for excellent responsiveness and a great user experience.

Housing all these specifications is a 1.1kg chassis measuring a compact 309 x 210.6 x 16.9mm and a 13.3-inch display. There’s also a “Flip” version and as its name implies, this variant of the ExpertBook B5 allows you to use it as a standard notebook or as a tablet simply by flipping the screen over to the back.

That said, business notebooks aren’t unusual nowadays but what sets the ExpertBook apart for me is its solid and rigid build. There’s something about the ExpertBook B5’s build quality that exudes confidence in it being able to rough it out in all but the most dramatic accidents. It could be its mix of aluminium and magnesium aluminium alloys materials that allow ASUS to achieve a light form-factor that’s also durable, or the fact of the matter that the company also tested it to the military-grade MIL-STD810H standards for durability. Now, this grade of testing is often brandished by many notebooks, but there are several tests that vendors can pick and choose to certify their machines. The ExpertBooks go through a fair bit more than the usual set you'll encounter, so do check out the full gamut of tests that ASUS has put this series of notebooks under scrutiny. 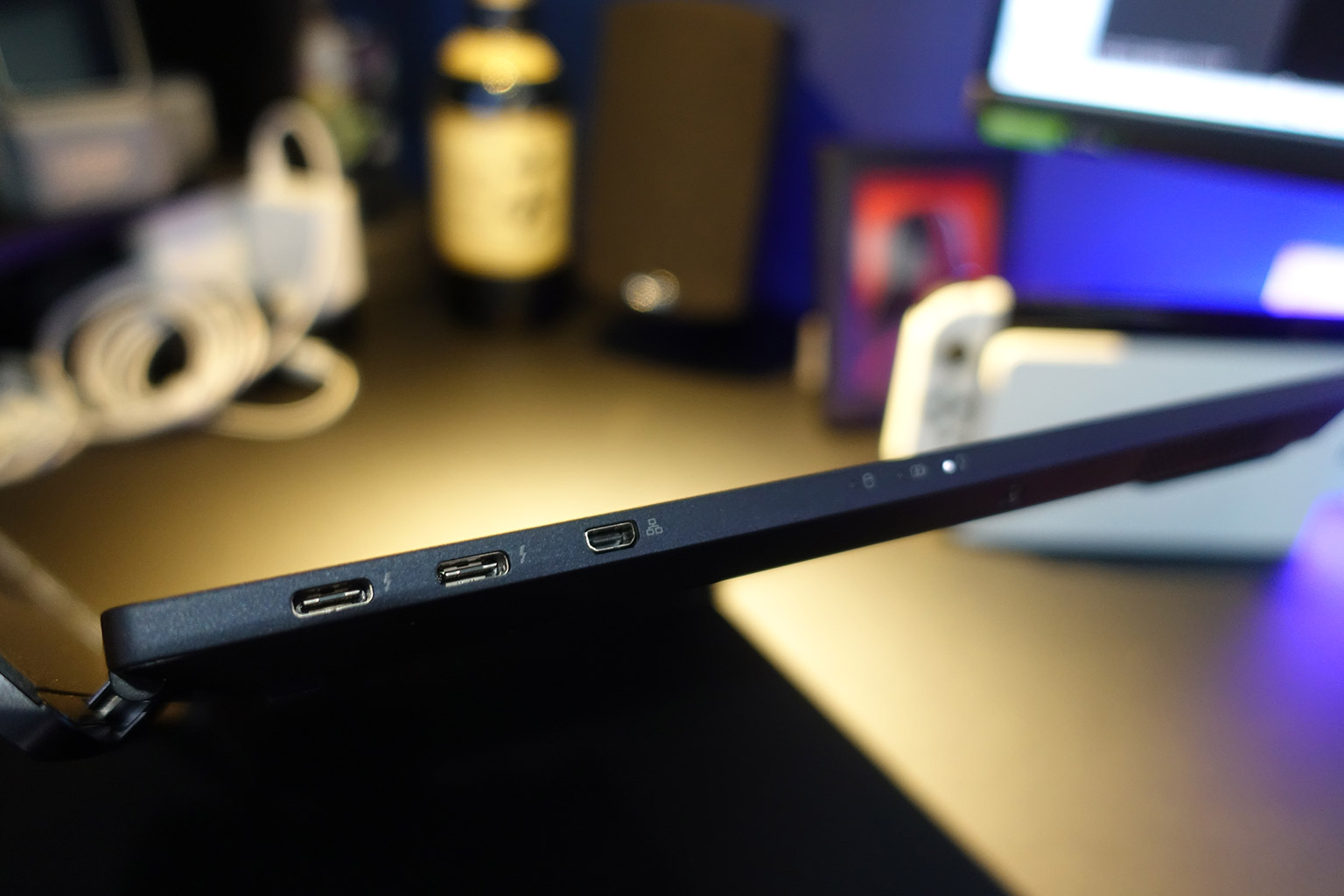 Despite its svelteness, the ExpertBook B5 has a pretty comprehensive range of I/O connectivity. For starters, on the left side, there are two Thunderbolt 4 Type-C ports – either will allow you to charge the notebook with the supplied power adapter, and/or charge a mobile device at the same time – alongside a micro-HDMI port that allows you to connect the notebook directly to a LAN point (yes, you've read that right) via an included RJ45 dongle. (Also read why we recommend that your next notebook should have Thunderbolt 4 ports.) 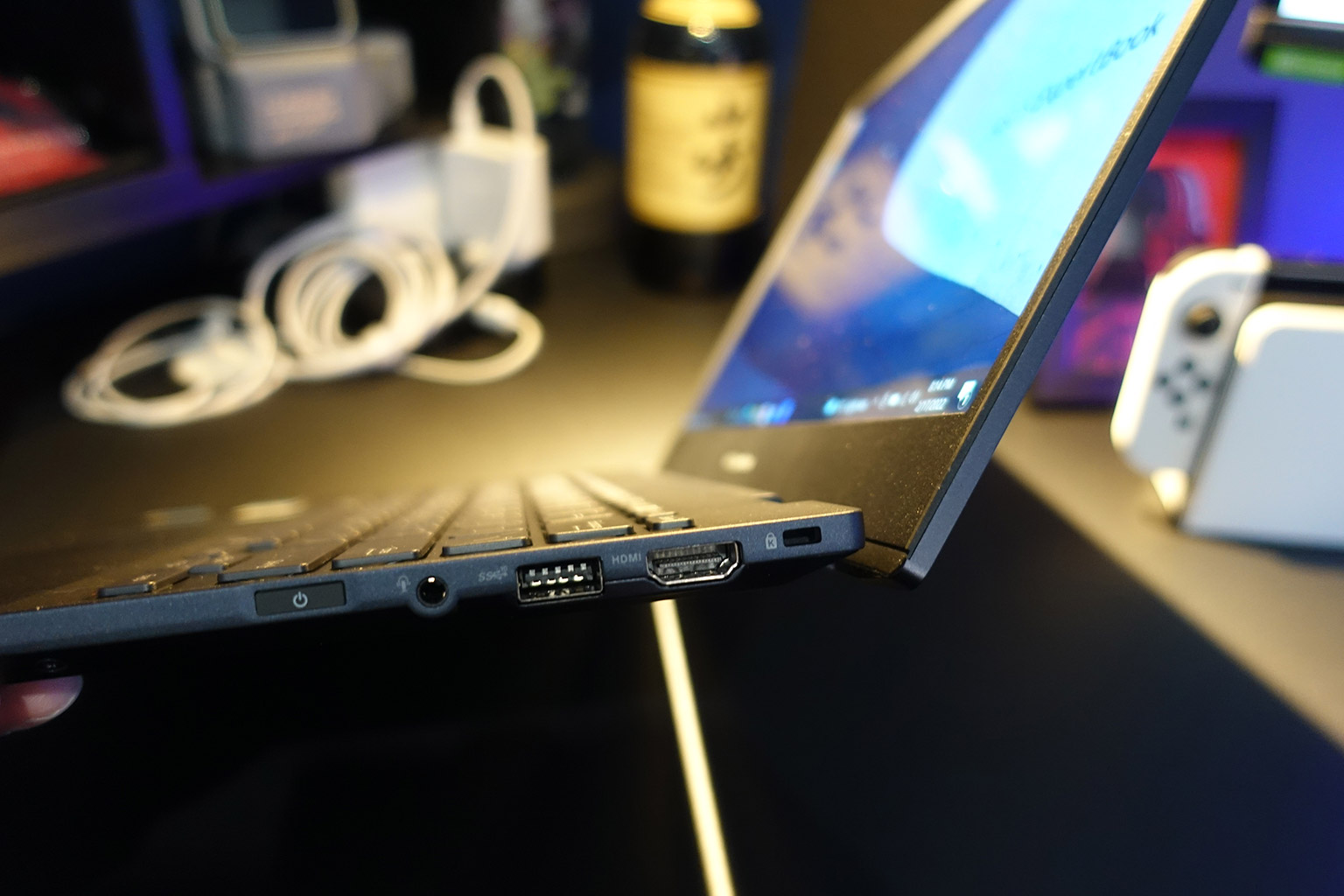 There is also an HDMI port, 3.5mm audio port as well as a single USB Type-A on the opposite side. The single USB-A may not be sufficient if you are using a lot of USB accessories such as an external keyboard and mouse. It’s certainly not a deal-breaker in my opinion as one can always go with wireless Bluetooth options and adding on another USB Type-A port would no doubt compromise the notebook’s form factor too. You could also easily opt for a Thunderbolt dock to expand your port options significantly (such as this crazy Belkin model with 12 ports), but the underlining aspect is that this notebook has enough ports where it counts and is easy to expand. And if you are wondering why there is no SD card reader, bear in mind that the ExpertBook series, like many other business and professional notebooks, is built to work in a secured office environment where card readers are generally discouraged.

Without a doubt, one of the best features of the ExpertBook B5 is its OLED display. Where most notebook makers tend to use OLED panels on only their top-of-the-line models and running them in 4K glory, ASUS is running it at a sensible 1080p resolution on the ExpertBook B5’s 13.3-inch display. There’s simply zero sense in running 4K in such a small screen estate anyway, and it would also needlessly impact the notebook’s battery life performance too.

But because it’s using an OLED panel, the result is that the ExpertBook B5’s video output is nothing short of stunning. It’s certainly on par with those I have seen on ASUS’ high-end ZenBooks and one of the best, if not the best display of any professional business notebook out there. Not only is its rated 0.2ms response time smoothly impressive, but the display also offers an ultra-wide colour gamut of 100 per cent DCI-P3, which is the standard for the motion-picture industry, as well as Pantone Validated to provide precise colour accuracy.

Some might opine that a high-end panel like this is a tad overkill for a business notebook. But for what it’s worth, I think good displays have been too lowly prioritised for this class of notebooks for far too long. Our eyes certainly deserve better whether at work or play, and ASUS gets a big thumb up here from me. Hop over to find out even more about why OLED displays are so good and how ASUS treats them to overcome concerts of this display technology. 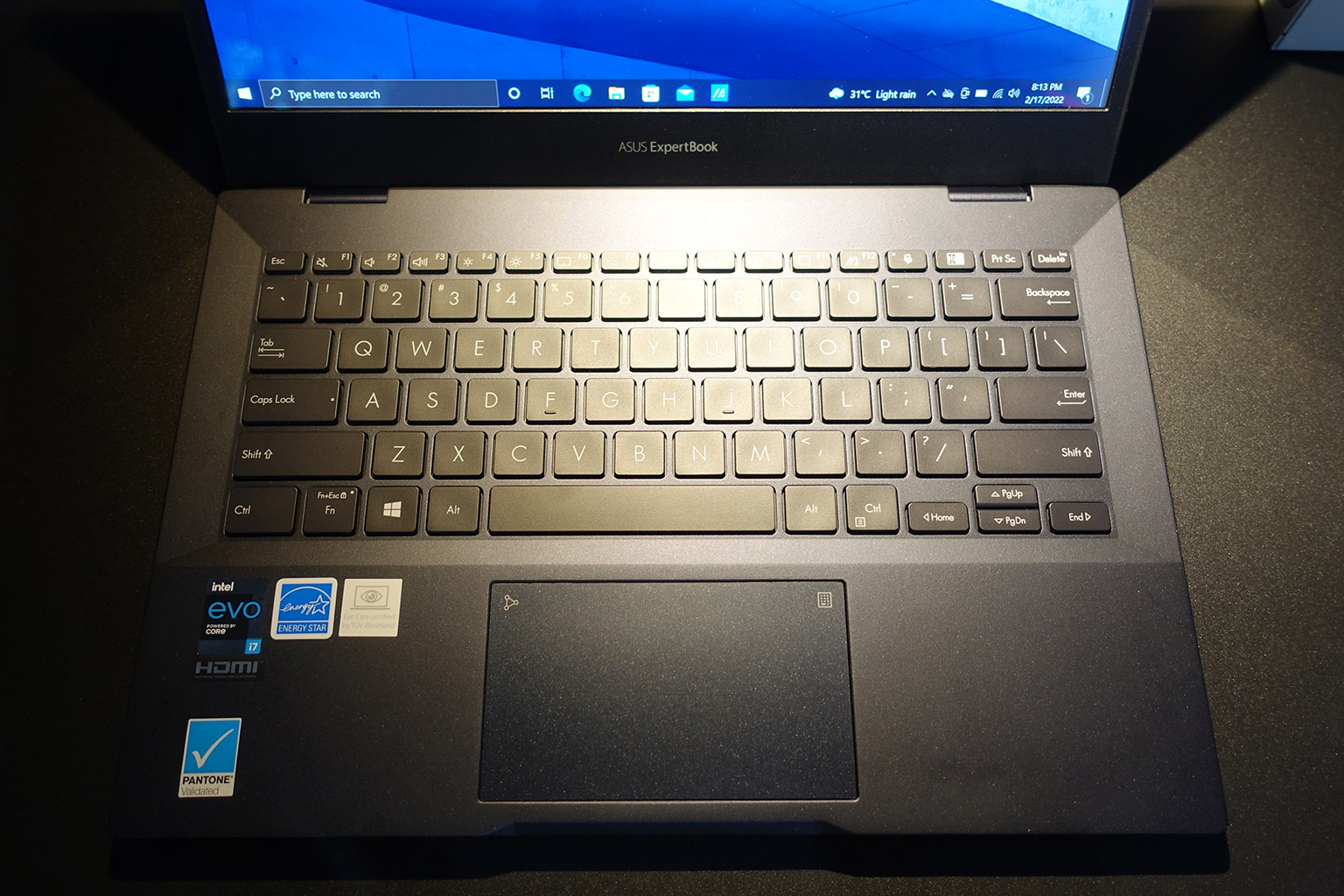 Right at the top of the display within its thin bezel, ASUS has packed a 720p webcam which while it isn't Windows Hello certified, is integrated with a physical privacy shutter. The webcam is also accompanied by a microphone array that is enhanced with two-way AI noise-cancelling technology powered by ASUS for clearer conferencing needs. Since we're on the topic of virtual meetings, you'll be glad to know that the ExpertBook B5 has a handy user status indicator that glows when you're in a Skype or Teams meeting so you'll never get disturbed by colleagues. This is embedded on the display's rear cover next to the ExperBook's branding.

Below the display is an equally good keyboard and trackpad too.

It’s fair to say that my experience with the ExpertBook B5 has been positive in my time with it, and one key reason is the notebook’s responsive and tactile keyboard. Even for a 13.3-inch notebook, the back-lit keyboard felt spacious, is spill-resistant (admittedly, I cannot bring myself to test this), comes in a layout that’s sensible and has good key travel for typing comfortably and accurately through tactile feedback. Much of these aspects are hallmark highlights from even the ASUSPRO B9440 from five years back. Let's not forget the ErgoLift hinge that titles the keyboard for a better typing experience when you open the display panel, which while it doesn't sound much these days, was revolutionary years back on the ASUSPRO B9440 and is still present today.

The trackpad works as one would expect it to, and is what ASUS calls the NumberPad 2.0. As its name suggests, can function as a numeric keypad by tapping the top right corner of it. We've covered more about it in an earlier notebook featuring it, so do hop over to check it out if you're keen to know more.

Unlike our usual notebook benchmarks, with the enterprise/business ExpertBook B5 I will focus mainly on its productivity and battery performances. We have not reviewed many notebooks in this class – such as the Latitude and ThinkPad series by Dell and Lenovo respectively as they aren't readily offered for review. The last truly professional office notebook we've reviewed was HP's Elite Dragonfly and although not much older than a couple of years, its use of an outdated 8th Gen Intel Core processing platform makes it quite long in the tooth. But just for comparison’s sake, let’s see how the ExpertBook B5 compares to the recently reviewed Dreamcore Dreambook Touch 15 which comes specced similar to the ASUS – albeit in a larger 15-inch chassis and therefore higher battery capacity. 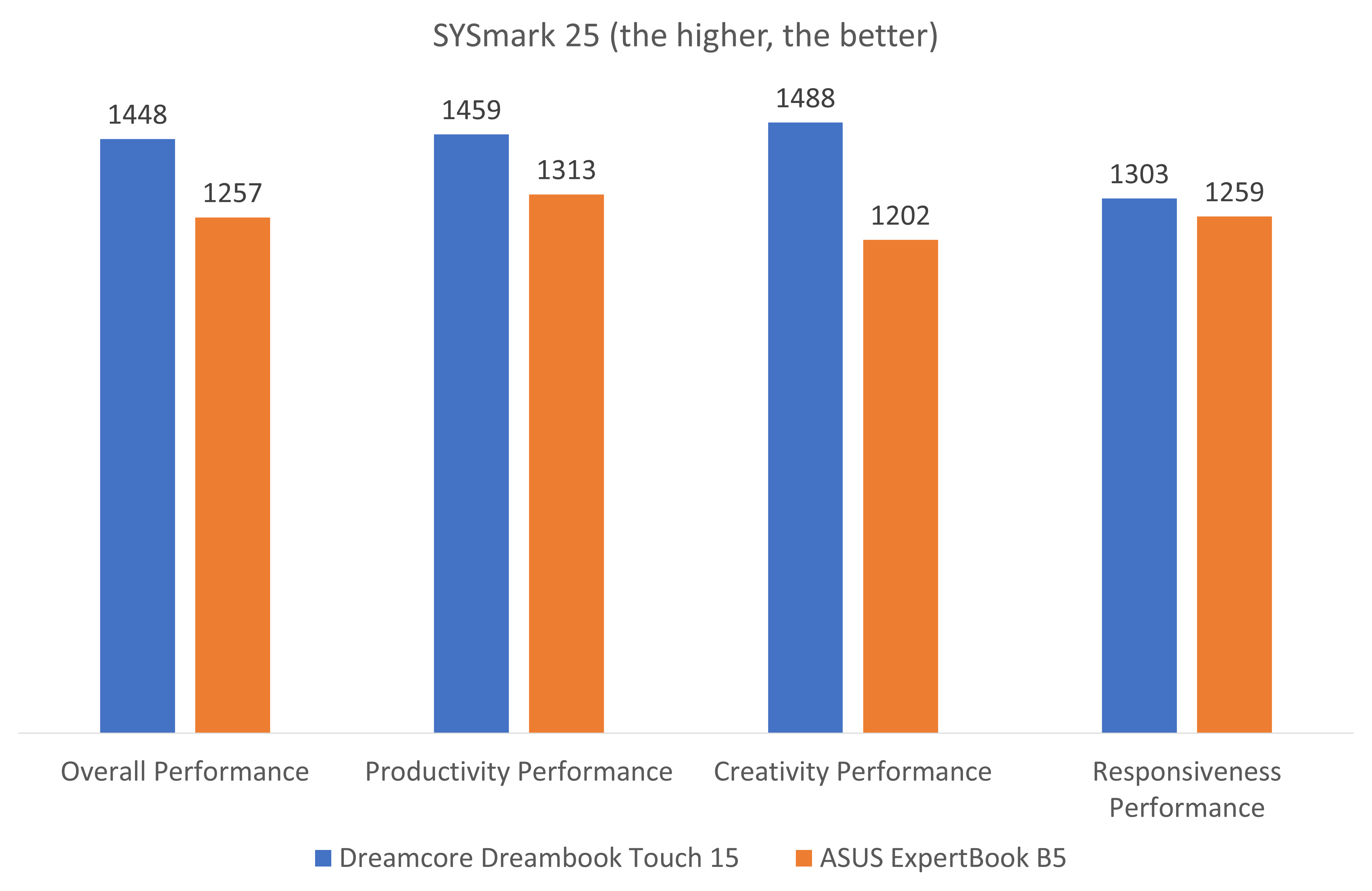 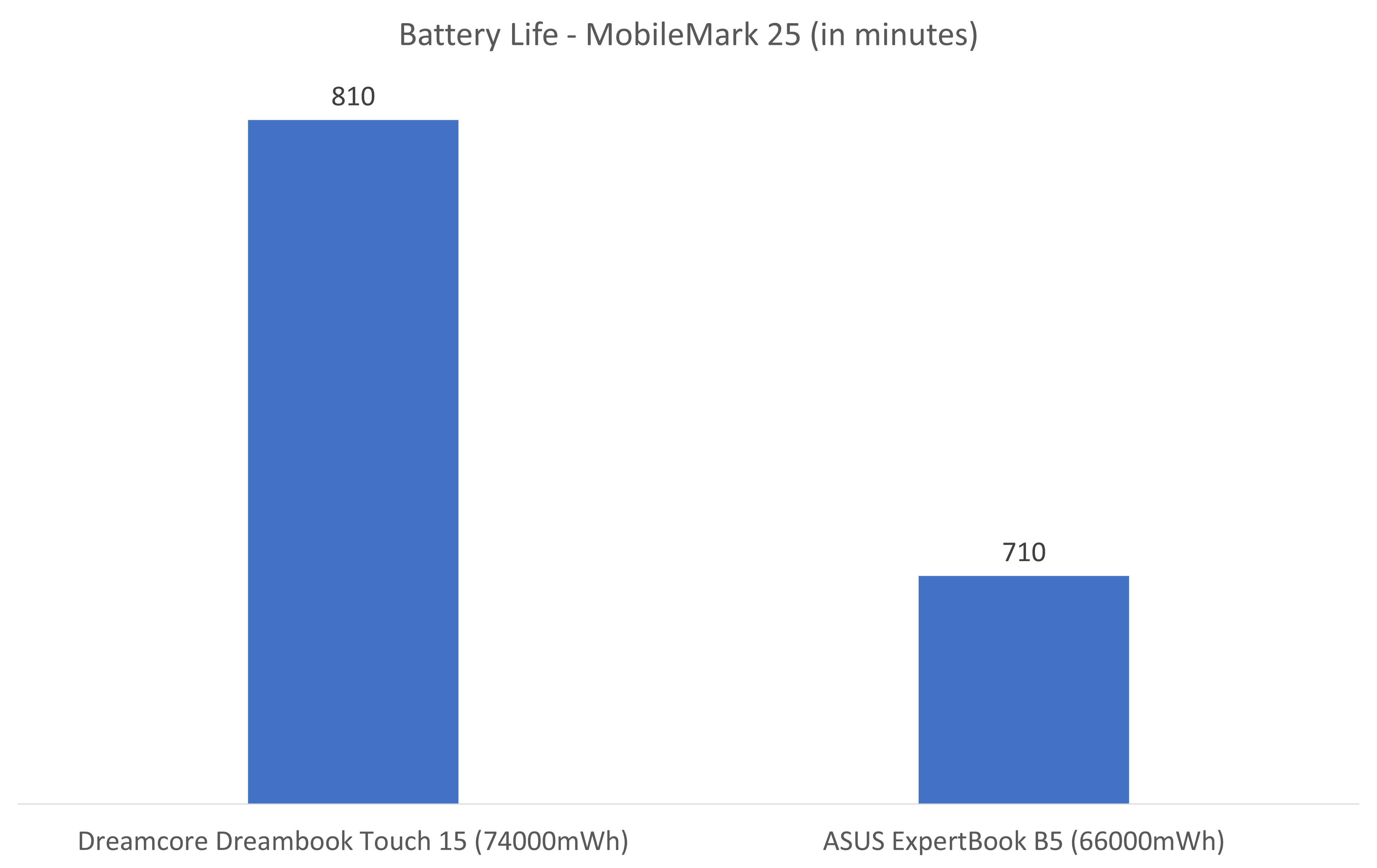 If there’s one performance gripe that I have with the ExpertBook B5, it is the 8GB memory running on a single channel – almost pitiful by today’s standard where 16GB of memory is the norm rather than the exception. This has a negative effect on Bapco's real-world application based test suites, SYSmark 25 and MobileMark 25 benchmarks, where higher memory capacity that runs on dual channels will show a marked improvement across the board. Simply put, if you intend to get the ExpertBook B5, make sure to get an additional 8GB upgrade or opt for an SKU from ASUS that adds the additional memory stick - ASUS has several iterations on offer.

Battery life is where it truly shines, attaining almost a 12-hour run in MobileMark 25, and this is close to the 14-hour battery life claim by ASUS. To put it in context, the battery will last for the entire duration of your flight to a European city (from our sunny Singapore island, of course). For business travellers or those on the road often with little access to a power outlet, the ExpertBook B5 is a good consideration if you are on the hunt for a notebook that can last an entire day with heavy usage. 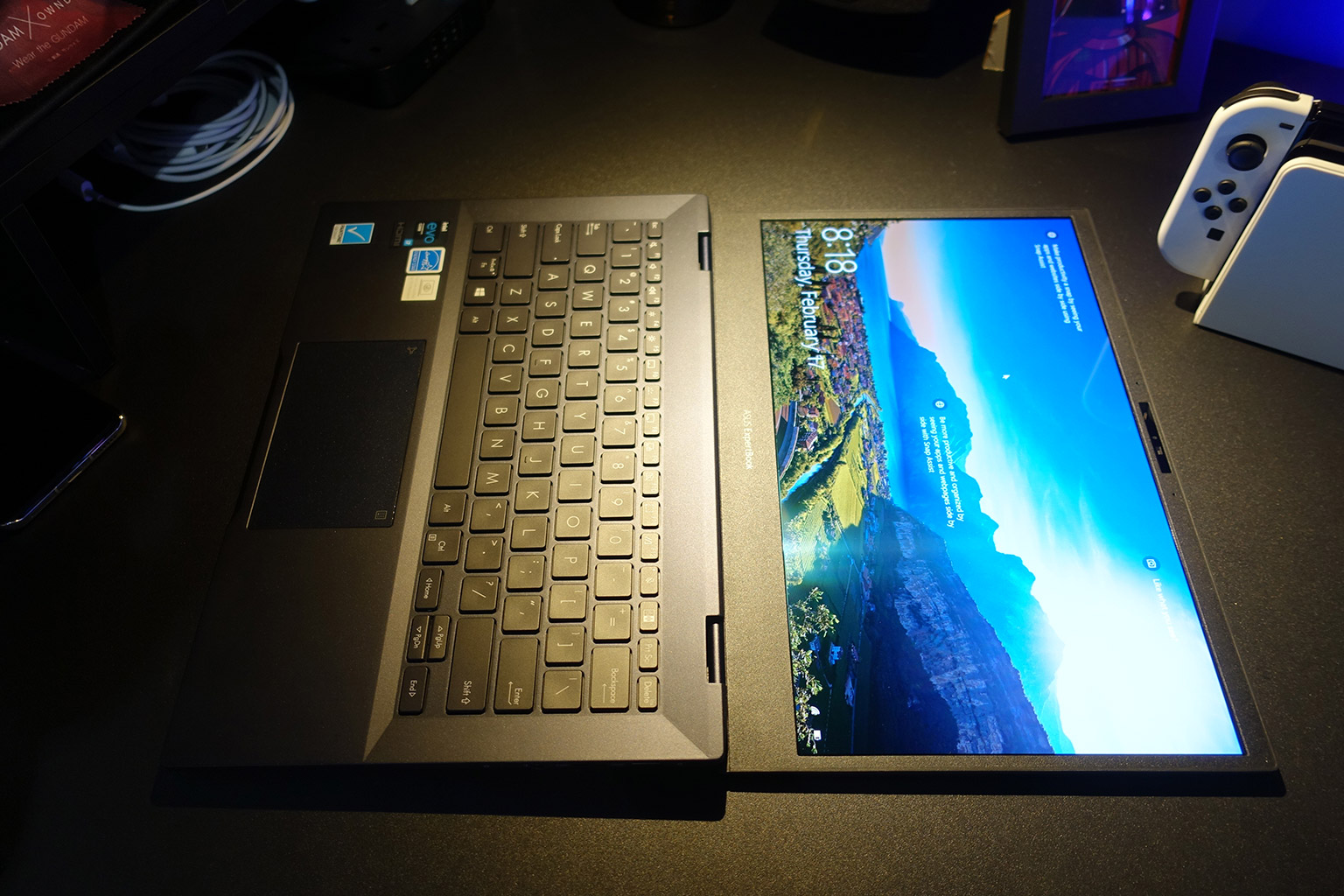 The audience that ASUS is pitching the ExpertBook B5 to is quite specific – gamers and content creators need not apply – but it is not a small one. For professionals, you should care more about portability, battery life and even the build quality. With the ExpertBook B5, you will get all of these for the price of S$2,098 (the same specifications as my review unit) alongside a brilliant OLED display.

It is also among the lightest business notebook available at this size, and while the unit tested comes with just 8GB, the ExpertBook B5 has plenty of upgradeability options available including dual storage slots for those that need the additional bump in storage capacity, something that I suspect not many competing business notebooks from other brands are offering. Let's not forget for those who wish to have a tablet-like usage experience, the Flip edition is also available for just a hundred bucks more.

For those who wish to have the base model of the ExperBook B5 that has an IPS display and a Core i5 processor, the series starts from just S$1,498.

Write a Review
Compare This | Specifications
Excellent OLED display
Battery life is astounding for a 13.3-inch
Extensive I/O ports
Keyboard is quite possibly one of the best in its class
Good upgrade flexibility
Single-channel memory in review unit
Could ASUS have given a more powerful CPU option?
Not Windows 11 out of the box
Our articles may contain affiliate links. If you buy through these links, we may earn a small commission.
Sponsored Links