For perhaps half a year now, the high-end graphics card space has been constantly playing the 'power shuffle' game as we saw the graphics card crown being bounced back and forth between ATI and NVIDIA on a frequent basis. To keep the chase short, here's how the crown has shifted hands since the birth of the NVIDIA GeForce 7800 GTX (May.2005) --> ATI Radeon X1800 XT (Oct.2005) --> NVIDIA GeForce 7800 GTX 512MB (Nov.2005) --> ATI Radeon X1900XTX (Jan.2006). If you factor in availability issues of the GeForce 7800 GTX 512MB soon after the initial batch, that means ATI's solutions have been leading the performance race at the retail graphics card market since late last year. While that's a victory for the red team as far as absolute performance matters, NVIDIA's GeForce 7800 GTX 256MB and the GeForce 7800 GT have both been eating into ATI's high-end graphics card sales simply because these two NVIDIA SKUs have been steadily sliding in price over the many months with plentiful supply and though they don't hold the speed record title, they still had plenty of performance to offer. Simply said, their price-to-performance ratio was unlike any other card in a long time in the high-end space.

NVIDIA was still holding the lead in a number of other key categories, so the missing performance crown wasn't really a big issue, but nevertheless it is still something that they will relentlessly pursue just like its competitor. While ATI has successfully rolled over to the 90nm manufacturing process for all its Radeon X1000 series graphics cards, NVIDIA has only barely started their transition with their first major move in the low-end segment with the recently launched GeForce 7300 GS. Looking at how well NVIDIA's existing lineup is holding well with the existing mainstream and high-end GPUs still using the tried and proven 110nm process, it's not difficult to fathom what a GPU die-shrink to 90nm would do for them. Lower costs, reduced power consumption, greater clock speeds are just some of the most immediate gains from using a more advanced manufacturing process technology and that's exactly what NVIDIA set out to accomplish for the mainstream and high-end GeForce 7 segment with updated parts.

Hannover in Germany is the home ground of CeBIT, the world's largest exposition for IT and telecommunication solutions, lasting nearly a week from the 9th to 15th March 2006. For a trade fair of its reputation, it is an ideal setting for mass attention of any company's new announcements and product launches. NVIDIA knows the rules of capitalizing exposure all too well and so they chose the grounds of CeBIT to launch their new refresh of graphics cards that will enhance their high-end segment and finally bring forth the mid-range segment in the GeForce 7 series, which finally completes the family. More on the mid-range in an upcoming article, but today we'll focus on the high-end.

Following the footstep of the GeForce 7800 series that was based on the G70 core, the foundation of the new GeForce 7900 series will be the G71 core which is basically a 90nm process technology version of the former that used the 110nm process. Feature-wise, both cores are identical and there were minimal enhancements if any at all. From the benefits we mentioned earlier of adopting the new process technology, the GeForce 7900 series have been updated with new specifications in both the GT and GTX variants. In this article, we'll be focusing on the GeForce 7900 GT, so lets take a quick look at its base specs and compare against other cards in its performance/price rung:- 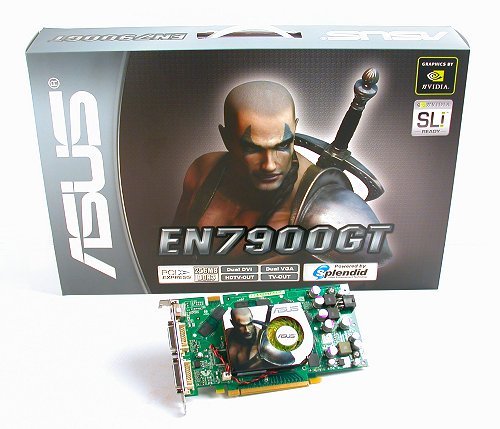 We managed to land our hands on the ASUS EN7900GT, a GeForce 7900 GT graphics card with 256MB of DDR3 frame buffer for our evaluation and with this, we'll soon find out exactly the value and performance proposition of the new GeForce 7900 GT.