Mountain Everest 60 keyboard review: You never have to give up the numpad
Product Listing
AcerAppleASUSBlackBerryHPHTCHuaweiLenovoLGMicrosoftMotorolaPanasonicProlinkSamsungSonyToshibaViewsonicXiaomi

Technology is advancing so rapidly this year that consumers hardly have any time to think what hit them. Dual-core tablets are on the rampage this year and now a tablet powered by a quad-core processor has arrived. Did the ASUS Eee Pad Transformer Prime live up to the media hype? Well, it does in most aspects elegantly.

The ASUS Eee Pad Transformer Prime is second to none when it comes to design and build quality. Encased in a stunning aluminum body with metallic spun finish, the Transformer Prime trumps almost every other Android tablet aesthetically and is comparable with the Apple iPad 2. Thanks to the properties of aluminum, the 586g Transformer Prime is very portable to tote around and yet provides a very assuring feel in the hands. You will also have no problems with fingerprints or dirt soiling the looks of the Transformer Prime as they do not show up easily on its metallic frame.

With more people carrying their tablets around, it is a blessing that ASUS continues to harden the displays on its tablets with Corning Gorilla Glass. What can be more heartbreaking than seeing a small scratch on your newly purchased Eee Pad Transformer Prime, right? Taking a similar naming convention as Samsung, ASUS unveiled the Super IPS+ panel on the Transformer Prime, giving it a record breaking brightness of 600nits. While it is unnecessary in most situations, it will come handy when viewing content in outdoor environments.

The 8-megapixel rear camera on the ASUS Eee Pad Transformer Prime scores a hit with us as it produces the best image quality among all the tablets we have tested so far. The quality is comparable to many of the top-end smartphones today in the market although it is odd to be seen using a tablet to take photos. We appreciate that ASUS invested its efforts in bumping up the camera performance on the Transformer Prime. This will certainly induce competitors to come up with comparable or even better camera specs, which ultimately benefits consumers.

Another key milestone achieved by the ASUS Eee Pad Transformer Prime is its battery stamina. By leveraging on NVIDIA's implementation of vSMP technology, ASUS is able to maximize the battery life on the Transformer Prime to over seven hours in our strenuous battery testing regiment - the best showing by an Android tablet so far. We suppose ASUS also played some part by optimizing power management on the device.

Last but not least, the optional keyboard docking station is a necessity for those who want to work on the tablet wherever they go. Even though the keys are flat and shallow, they still offer a decent and comfortable typing experience - far better than an onscreen keyboard. An additional bonus is its battery pack that can last you a further six hours over what the tablet can endure on its own.

Being the first to introduce a quad-core processor in a mobile device doesn't mean that you will have the fastest tablet in the market. While the ASUS Eee Pad Transformer Prime has the Tegra 3 quad-core processor to boast, its actual performance left a lot to be desired. The user experience was generally fine except that we encountered some unusual and unexpected lags from the device time to time. A likely explanation for these observations could be that the Android Honeycomb platform is not optimized for use with Tegra 3 quad-core processor. Simply put, the operating system may be the one holding the Transformer Prime back from maximizing the full potential of the quad-core processor. Another aspect which bothered us is the booting up process which is slightly longer than usual. We'll have to reassess these aspects when the commercial models are available for us to test with the Android 4.0 OS.

While fingerprints and smudges on the screen are a common problem faced by most tablets these days, the problem is especially irritating on the ASUS Eee Pad Transformer Prime. We could not help but wipe the display ever so often as we could not tolerate the soiled look after a few minutes of touchscreen usage. 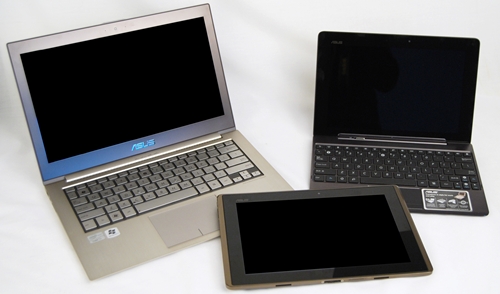 With such competitive pricing, it is hard not to recommend to anyone who is looking for the best Android tablet in the market at the moment. To put things into perspective, the Transformer Prime costs almost the same as the one-year-old Transformer (S$898 with keyboard docking station). The Samsung Galaxy Tab 10.1 32GB (Wi-Fi) and Sony Tablet S 32GB (Wi-Fi) may be priced lower at S$798 but you lose the extra functionality afforded by the keyboard docking station and up to six hours of extra battery stamina.

The ASUS Eee Pad Transformer Prime with Android 4.0 seems to be a perfect match for each other. We did not experience the occasional lags on the device that were reported when it was running Android 3.2. Even the boot up process is much faster now. The overall user experience is beyond any doubt, a step above all other Android tablets and closes the gap with the Apple iPads. We enjoyed using the Transformer Prime loaded with Android 4.0, especially the improved multitasking, home screen folder support and enhanced lock screen functionality.

Write a Review
Compare This | Specifications
Great design and build quality
Lightweight form factor
Excellent battery life
Good camera performance
Pleasant user experience
Screen is a fingerprint magnet
Keyboard dock could be better
Our articles may contain affiliate links. If you buy through these links, we may earn a small commission.
Sponsored Links