Due to a perceived need that hardware manufacturers should provide the widest compatibility possible, legacy hardware generally remain entrenched for longer than it should. This can be observed for the AGP graphics interface and the same scenario is now happening with PATA (or IDE as it is more commonly known), which is gradually being supplanted by SATA. Despite the fact that most new motherboards now usually come with more SATA ports than IDE ones (Intel's new chipsets only have SATA interface), there is still a rather healthy market for IDE drives and more so when it comes to optical drives.

Just the other day, we were grumbling among ourselves about the thickness of IDE cables in general and how that affected cable management within the chassis. The consensus was that the slow introduction of SATA optical drives in the market means that motherboard makers have no choice but to include IDE ports, if just for that purpose, even if the motherboard is targeted at enthusiasts who are unlikely to have any legacy hardware. Unlike the demand related reasons why other legacy hardware stick around longer than preferred, for optical drives, it seems that their lackluster uptake of the SATA interface is solely cost related - at one point, they can cost up to twice that of their IDE drive counterparts. It is no wonder that the response has been muted, but that's finally going to change this year with more drive vendors focusing on SATA. So far, there have been very few SATA optical drives; we can only find a couple of models from Samsung and Plextor. And now we can also add the ASUS DRW-1814BLT 18x DVD writer to that small group of pioneers. 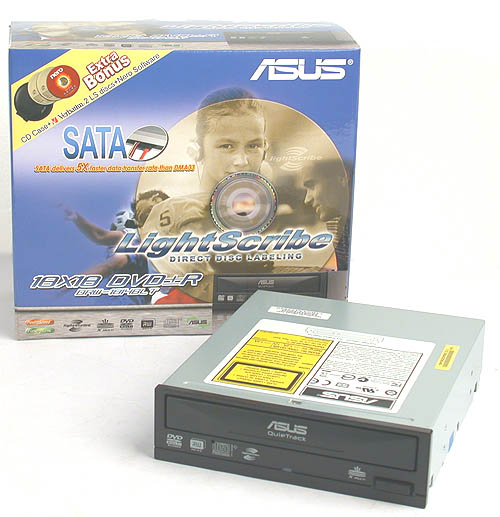 Besides the 'novelty' of the SATA interface, the ASUS DRW-1814BLT is rated as one of the faster DVD writers now. After flatlining at 16x DVD write speeds for some while, manufacturers have recently introduced models capable of 18x and even 20x write speeds for the typical DVD+/-R media. Suddenly, it seems that the speed race has been revived, though with the relative scarcity of media rated above 16x and the competition posed by the new high-definition media like Blu-ray and HD DVD, we believe that this would ultimately fizzle out. But before we speculate further on whether such speedy drives will amount to anything in the market, let us first take a look at the performance of such a drive like the ASUS DRW-1814BLT.