Astro's Playroom is an irresistibly joyful celebration of PlayStation history

Astro's Playroom is an irresistibly joyful celebration of PlayStation history 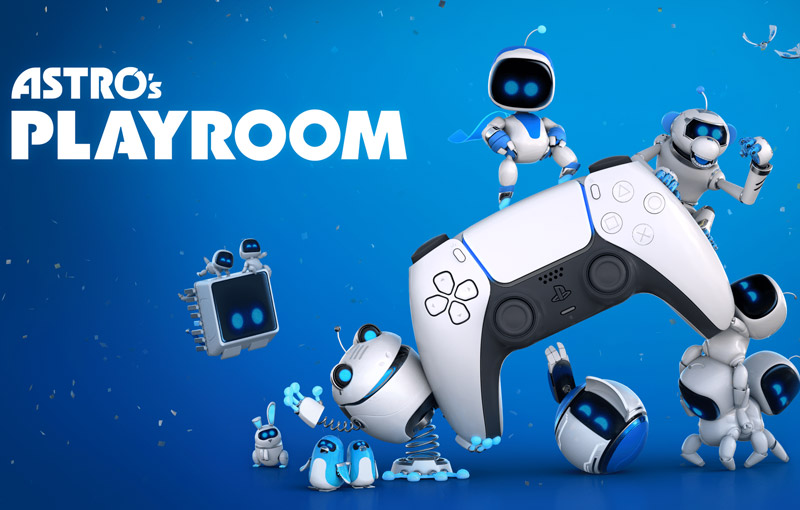 Owners of a brand-new PlayStation 5 might notice that they’ve received an extra game in their library for free: Astro’s Playroom! This game was created by Japan Studio to show off the DualSense controller’s interesting new features, but the team went above and beyond to make this so much more than a fun collection of minigames. If you look past its tech demo-like gimmicks, Astro’s Playroom is a legitimately emotional tour through 25 years of PlayStation history.

It might be tempting to skip out on Astro’s Playroom entirely and play something like Spider-Man: Miles Morales or Demon’s Souls to test out your shiny new console, but that would be a tragic mistake. This is one of the most fun experiences you can have on a PlayStation 5 right now, especially if you’ve been following PlayStation consoles for a long time.

What is Astro’s Playroom? 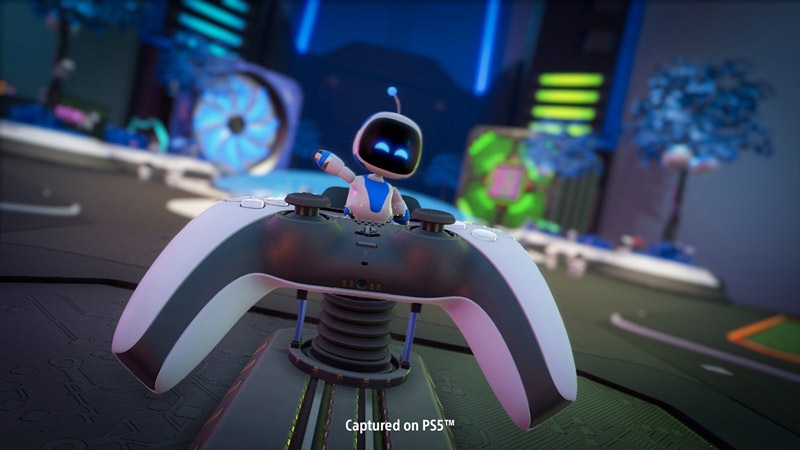 Astro’s Playroom puts you in the bright blue boots of Astro Bot, a little robot with enough peppy energy to match the Road Runner. The game has Astro tour through different worlds, each themed after a specific component of the PS5. For example, the console’s cooling system is represented via Cooling Springs, an area that shifts from sunny beaches to icy floes. It’s such a gorgeous place, and a great example of how just one of these worlds can offer so much environmental variety. I spent a ton of time on the beach alone, exploring its waters and unlocking secrets - but more on those secrets later.

This is a platforming game, which means that you’ll spend a lot of time collecting coins and unlocking paths forward by zipping about and solving puzzles. The DualSense comes into play when each world presents its unique gameplay gimmick, which usually comes in the form of a suit that Astro has to wear to navigate certain levels. In Cooling Springs, it’s a spring-like suit that jumps in the direction your controller is tilting towards. You have to press down on the R2 button - with the haptic feedback fighting you back - and release it to make Astro spin off into the air. 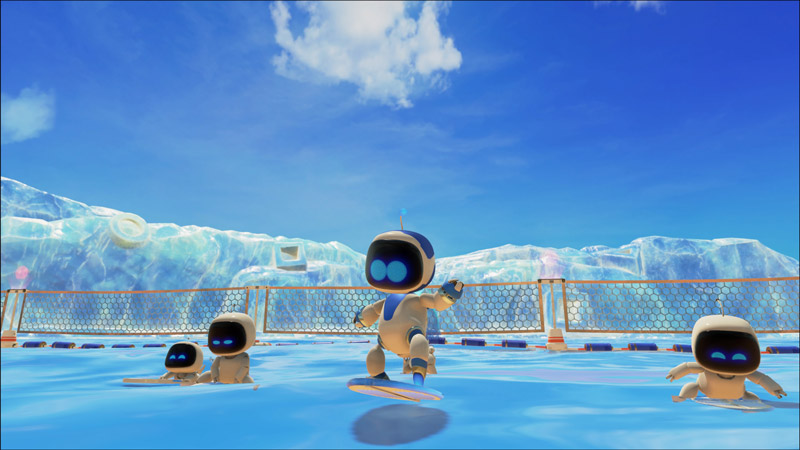 All of the DualSense’s new upgrades come together for this simple slice of gameplay, which is really neat. You hear the spring coil contract via the speaker (which isn’t new, but it sounds a whole lot better now), feel the tension ramping up via the back triggers and a low rumble throughout the controller as the robot quivers right before takeoff. This is a really specific example of what Astro’s Playroom does with the controller, but there are dozens more scattered throughout the game that really immerse you in this weird, magical world.

The DualSense integration is cool and all, but some of its gimmicks fell a little flat for me. One of Astro’s suits turns the robot into a bowling ball, with you swiping on the touchpad to control it. It felt a lot less fun to control compared to the spring-like suit, and since entire levels of each world are designed after these suits, things can go south fast if you don’t like using them. Fortunately, these segments rarely outstay their welcome, and they do allow each world to feel totally fresh in gameplay. 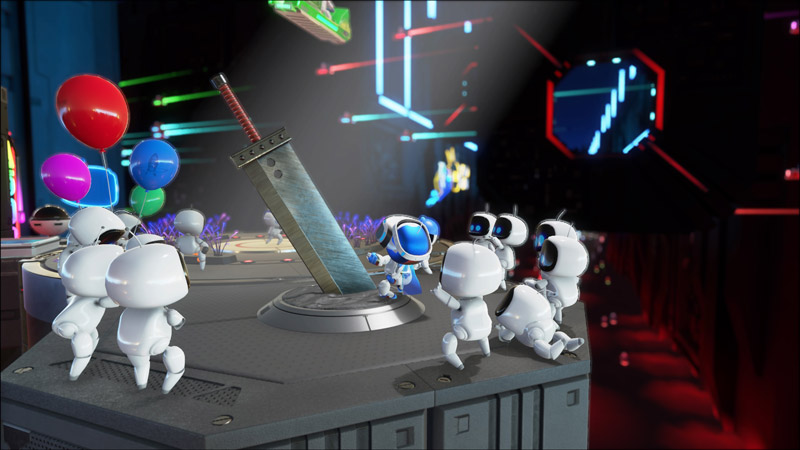 Astro’s Playroom seemed adorable in the very few trailers I saw of it before release, but my main concern was that all of its PlayStation-themed elements would start to feel garish rather than nostalgic. Product placement in games coast a thin line. On one hand, you have something cute and novel like Chex Quest, a kid-friendly Doom remake that came in cereal boxes. On the other, you have ads for Norman Reedus’ motorcycle series displayed on Death Stranding’s toilets, which just felt icky on several levels.

I’d say Astro’s Playroom toes the line remarkably well. You’re walking through the innards of a PS5, but it’s not just a look forward at this new machine. Easter eggs are scattered throughout the game, referencing old Sony hardware and iconic games that graced those devices. The amount of detail is mindblowing. Every time you finish a level, you end up in an area that plays the sweet, sweet startup sounds of each generation of PlayStation consoles. Every artifact you dig up off the beaten path references old devices and their peripherals. Do you even remember the PSP microphone? Because Japan Studio surely does. 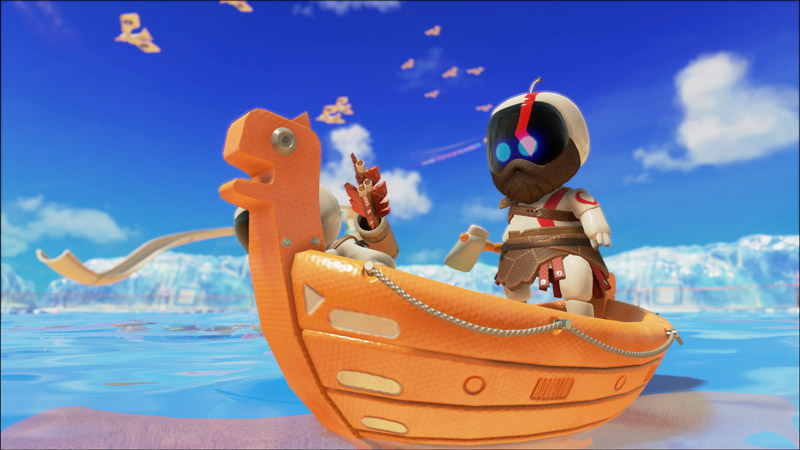 Hands-down, what kept me coming back to this game level-after-level were all the delightful cameos. Astro’s Playroom is filled with robots, and you’ll find them reenacting iconic scenes from legendary PlayStation videogames in every single world. A seemingly innocent cardboard box could reveal Solid Snake when hit, and elsewhere you might find a certain Buster Sword planted in the ground, illuminated by a reverential ray of light. You don’t get physical rewards for finding these, but it’s just so much fun seeing two soldiers hiding from a zombie and squealing, “Ah! Resident Evil!”

Astro also collects coins throughout their journey, and these can be used to operate the gacha machine in the PlayStation Labo - an environment that displays all the collectibles you’ve racked up so far. The gacha machine ended up being a real guilty pleasure of mine, partially because feeling the DualSense vibrate before cracking open capsules was as satisfying as it was addictive. To sum up, even if you’ve only indulged in one PlayStation console generation - it’s likely that Astro’s Playroom has a lot of nostalgic value to offer you.

And that's not even mentioning a certain, truly exceptional boss that goes above and beyond to honour PlayStation history. So good. Astro’s Playroom might bank heavily on PlayStation nostalgia to charm players, but the game’s still a great platformer! This game just oozes charm, with unexpectedly pretty visuals and a catchy soundtrack - the main theme of which, after many hours of banging my head against the wall, I now realise is Starlight by Muse. The soundtrack really deserves a special mention here, as it sets the tone for each world so well. The GPU robot’s song in GPU Jungle is a bop all by itself.

Any good platformer requires a good protagonist with a ton of tricks up their sleeve. In Super Mario Odyssey, our favourite plumber could toss his hat, triple jump and dive to cover great distances. Astro feels similarly great to control. The robot can do standard melee attacks, pull objects, and even glide through the air while shooting lasers from their boots. Enemy encounters are often simple enough to push through without a second thought, though you’ll have to keep every aspect of Astro’s kit in mind while doing so.

Astro’s Playroom feels fairly easy to play, making it a breezy playthrough even for those who might not have a lot of experience with videogames. I don’t mean this as a knock against it in any way - it’s just a really light, joyful experience that you can get through with few problems. Not every game needs to be Demon’s Souls, after all. Astro’s Playroom doesn’t outlive its welcome. The game took me about three to four hours to beat, and that’s with me being obsessed enough to check out all of its secrets. It’s the perfect game to break in your PlayStation 5 console, what with its bright visuals, lively music and nostalgic throwbacks to decades of PlayStation history. Miles Morales can wait - just don’t miss out on this fun platformer!

Write a Review
Compare This | Specifications
Tons of easter eggs
Fun platforming
Fun DualSense implementation
Great finale
The DualSense gimmicks can get a little old in places
Our articles may contain affiliate links. If you buy through these links, we may earn a small commission.
Sponsored Links