Combat, some actually good stuff and a verdict 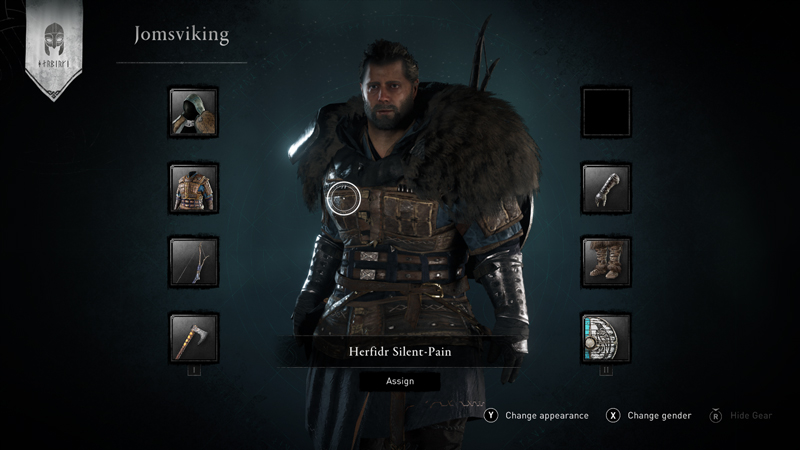 It might read like I hated this game in its entirety, but there are parts of it that I actually really liked. Ubisoft has clearly tried to tinker with the way open-world exploration works in this game, after numerous complaints about Odyssey’s insurmountable bevy of side quests. All of the open-world activities are now represented by little white, blue and gold dots on Valhalla's map. There are no icons to differentiate one activity from the other anymore, unless you get up close and discover it for yourself.

These activities come in all shapes and forms, and most of them are short and fun enough that you’ll want to partake in them - despite not knowing what that little dot might turn out to be. I ran into all sorts of fun side quests this way, just by seeing a blue dot close by and wanting to find out what it was. The side quests are strangely hilarious most of the time too, which I really dug. One of my favourites involved a man who had been stabbed in the head with an axe, but remained blissfully unaware of it.

The major improvement in most of these ‘World Events’ is that the game doesn’t really tell you how to complete them anymore. Finishing these quests usually requires you to pay attention to what these characters need, and make educated guesses based off of that. Across the board, there’s just a higher emphasis on player agency and exploration that I really loved. It didn’t feel like Ubisoft was just holding my hand through a series of painfully clear objectives anymore, and that made my Viking adventures a hell of a lot more fun. The open-world environments are also straight up gorgeous. The game starts off in a relatively plain snow-laden part of Norway, but once you get to the rolling green hills of England, there’s beauty to be seen everywhere you look. The novelty of exploring old England, including its many castles and towns makes it worth going off the beaten path. New drinking and flyting (Viking rap battling) minigames are also a ton of fun to do whenever they pop up. Unfortunately, the Xbox One version of this game didn’t hold up against all of this visual splendour very well. I saw major framerate dips in crowded areas and a mind-boggling amount of screen tearing in cutscenes.

Finally, the raids. Assassin’s Creed Valhalla introduces a new settlement metagame, where you can funnel resources into constructing new buildings for your people. As you build up your village and start filling it out, the settlement will level up - and you’ll start to benefit from the many buffs and tools your settlement provides. Building a fishing hut lets you fish in the open world, for example. Building up your barracks lets you customise the army of soldiers you take into raids.

Raids are really fun. You’ll find various monasteries around the map that house resources you need to upgrade your settlement. If you find one doable according to your Power Level, you can signal a raid, and your fellow Vikings will storm into the monastery and lay down the pain on your enemies. While they do so, you can break into various buildings and open crates to steal the resources you need. These raids basically go the same way every time you do them, but the metagame of spending resources and watching your settlement expand is satisfying enough to make up for that. It really feels like Ubisoft is trying to right past wrongs in the series with Assassin’s Creed Valhalla, if only by taking half-steps in the right direction. I like that they experimented with the structure of its story. I like that the combat feels meatier. It's just that both of these things are so flawed in execution, that they hamper the entire gameplay experience from start to finish. If you can look past all of its many flaws however, there’s a gorgeous world worth exploring here, and some of the best visuals from the series so far.