Let's preface this article by saying again - we are getting tired of the frequent socket changes by Intel. To use a gaming analogy, it's beginning to feel like grinding for gears in World of Warcraft. Currently, there are three Intel sockets out there in the market - LGA1156 for the first-gen Intel Core processors (Lynnfield and Clarkdale), LGA1366 for the enthusiast-class Core processors and the latest, LGA1155 for the second-gen, Sandy Bridge Core processors.

To upgraders, it's like navigating a minefield, with missteps potentially leading to costly platform upgrades rather than just a new processor or motherboard. Whether you agree or disagree with Intel's reasons for such changes, the company seems committed to this constant product churn. For instance, there's a new LGA2011 socket coming out later this year to replace the LGA1366.

With processing power rarely the bottleneck for the tasks that the average user engages in, the usual answer is to wait a few more years before upgrading the entire platform. There are however times when the motherboard and the chipset start to lack important updates such as the introduction of new technologies like USB 3.0 and SATA 6Gbps, not to mention the arrival of Intel's latest interface, Thunderbolt.

For those who are struggling to justify upgrading the whole platform despite having a decent processor that's good for another couple of years, ASRock has the answer. The motherboard manufacturer has made a name for itself with some unorthodox motherboard designs in the past and it continues this tradition with the ASRock P67 Transformer.

You would not be wrong to think that this ASRock board uses the Intel P67 chipset, but the twist lies in the fact that it actually supports older LGA1156, Lynnfield Core processors, not the newer LGA1155, Sandy Bridge processors that it should. ASRock has basically transplanted the Intel P67 chipset over to a board with the LGA1156 socket, bringing along the incremental upgrades that one gets from the newer chipset over its Intel P55 predecessor - native Intel SATA 6Gbps support and greater PCIe bandwidth on the chipset (a jump from 500MB/s on the Intel P55 to 5GB/s on the P67). The extra bandwidth ensures that there will always be 'true', full speed USB 3.0 and SATA 6Gbps on this ASRock hybrid.

In case you're not sure what's the fuss about the PCIe bandwidth on the Intel P55 chipset, check out our previous writeup where you can find out how manufacturers compensate (or not) for this limitation. And if you need a reminder of what the Intel P67 chipset brings to the table, here's a refresher.

So to sum up, the ASRock P67 Transformer supports solely Lynnfield Core processors despite its 'P67' moniker, which makes it suitable for those who have a moderately high-end processor, like the Core i7-870 and intend to retain it. 32nm Clarkdale Core processors however are not supported despite having the same LGA1156 socket due to chipset limitations (before you ask, we did try with a Clarkdale CPU and it failed to boot). This reduces the potential upgraders and buyers of this ASRock board to a relatively small group. Before we get to finding out if there's any real gains from using the P67 Transformer, here's a look at this seemingly nondescript board: 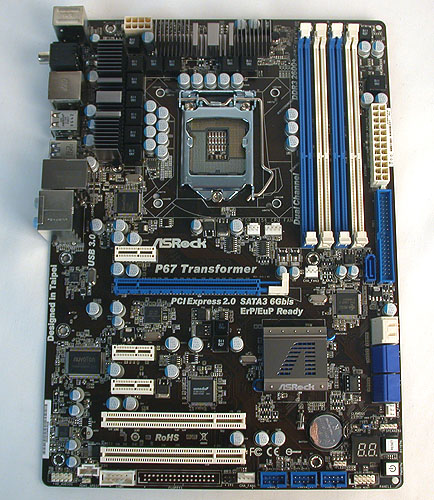 Write a Review
Compare This | Specifications
Interesting, unique attempt to address a niche problem
Decent layout with good mix of features
Too costly for a niche solution
Our articles may contain affiliate links. If you buy through these links, we may earn a small commission.
Sponsored Links