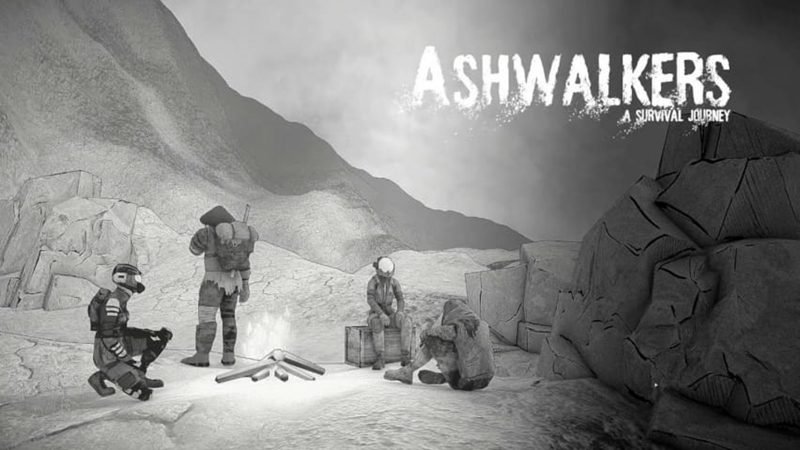 Sporting a relatively simple story, a point-and-click-style gameplay formula and a bleak, uncoloured aesthetic package that resembles a noir-style Fallout, it's fair to say that Ashwalkers is far from being the most eye-popping title on the block at first glance.

However, like many other events within the game itself, appearances can often be deceiving. Developed by the team over at Nameless XIII, Ashwalkers is a post-apocalyptic survival adventure that combines the open-endedness of a choice-based narrative with the tactical resource management element found in traditional survivalist titles.

When put together, this combo makes for an experience that's not only easy for anyone to comprehend and engage with, but backs it up with surprisingly complex gameplay as well. Sure, we've seen this particular fusion of game elements before in titles such as A Dark Room, but the level of strategic detail in Ashwalkers is what really sets it apart from the rest of the crowd.

Monotone but not necessarily monotonous 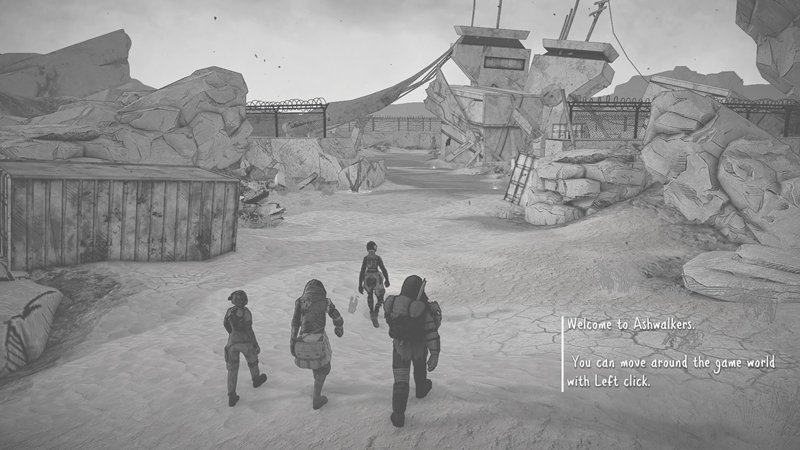 Aesthetically, Ashwalkers isn't the flashiest kid on the block - that much should be obvious. Compared to many other modern titles that run wild with vibrant splashes of colour, this game packs an otherwise unimpressive palette of whites and greys, using the occasional splash of red and black to emphasise injuries and threats respectively. However, that's not necessarily a flaw in this case, as the quartet of colours is more than enough to get the message across.

In fact, I think it's quite impressive how detailed the developers have made the landscape look in spite of the relatively monotone aesthetic. It can be quite entrancing just making your way slowly through the level, with deserted structures, flora and fauna dotting your path as you go. Otherwise, I daresay the bleak colour palette might even help centre players' focus on the actual gameplay and narrative.

Still, having a world which is nothing but greys and whites can get a little dull or even misleading at times, since it's hard to tell exactly where you can and can't walk. There were several instances in my playthrough where I headed towards what appeared to be a marked out path, only to find out that I couldn't walk to that area. Not only does it make for an absolute waste of the characters' energy resource-wise, but the relatively slow walk speed means you'll probably take ages to get back to the other paths. 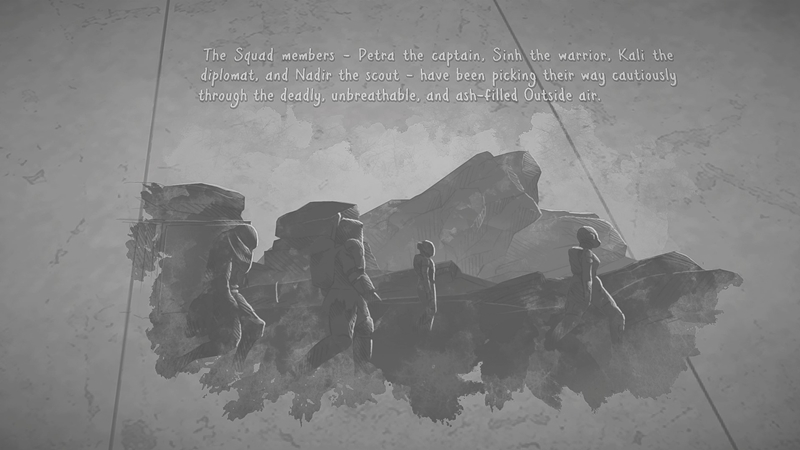 But that's enough about the aesthetics - let's touch on the narrative. After all, you've got four people wandering around the arid wastelands, and it's only sensible that you know why. Fundamentally, your group of four travellers, namely Petra, Sinh, Kali and Nadir are a Squad on the trail of humanity's last refuge, a mysterious sanctuary known only as the Dome of Domes.

To uncover its location, you'll have to make your way across this dead and dying land where ash has blanketed the world, hence the game's title. Needless to say, there will be numerous threats along the way, which can be external in the form of bandits, wild animals and traps, or internal, in the form of hunger, exhaustion, disloyalty and cold. It will take a skilled commander to successfully navigate or mitigate these issues, which might sometimes require that you leave people behind for the sake of the mission. So, yes, much like the game itself, there will be many morally "grey" areas that you'll need to cross. 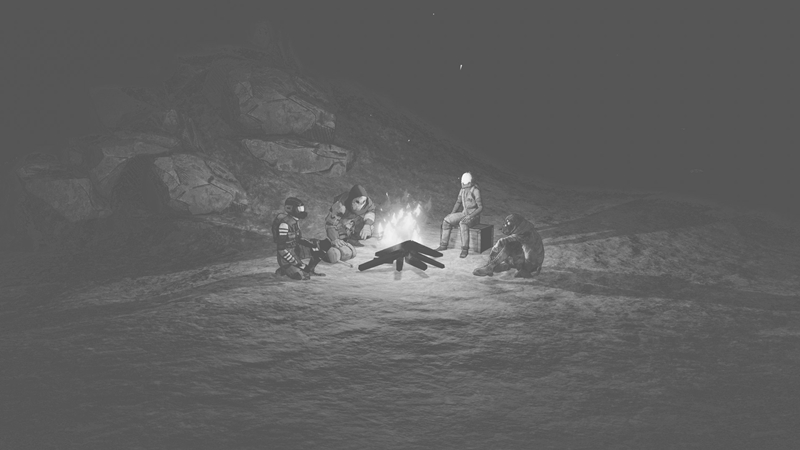 Frankly in terms of the narrative, this post-apocalyptic, "last refuge" gig is one that we've seen countless times, and as such we're probably no stranger to making the "tough decisions" in games. Oddly enough, this one hits just a little closer to home than usual for me, especially after spending some time reading the dialogue between the four characters. It makes them feel a lot more real in that sense, as their fears, concerns, motivations and hopes are all laid bare in these short but impactful sequences.

As an added note, I think it's a really nice (if chilling) touch to reflect the current state of the party during loading screens - if you've only got two members left in your squad, the loading screen will only show the silhouettes of the two remaining survivors. So, what does it all mean us players? Well, the crux of it is that Ashwalkers might end up hitting (obnoxiously) hard in the "feels" department despite having a rather commonplace narrative. Easy on the emotional hammer, guys - I didn't sign up for Guilt-tripping 101. Gosh.

Moving on to the actual gameplay, a lot of your time in Ashwalkers will be spent walking...yes, I know it's in the name. But as noted above, where the game sets itself apart from other survivalist titles is in the sheer amount of things that players will have to keep track of while you're busy putting one foot in front of the other. Specifically, the game includes more obvious elements like food, inventory weight and energy, but there's also stuff like warmth, injuries and even morale that you need to monitor as well. This already staggering amount of factors is made even more complex by the fact that you have not one but four party members to look after, meaning you'll need to be immensely practical when you're assigning tasks and portioning out rations.

And that's only half of the equation - the other half of the game is spent making choices, all of which will have a significant impact on your playthrough. Most situations (assuming you have the necessary members) provide multiple options, and it's up to you whether to opt for fight or flight.

Making the wrong choices can end up losing you resources or getting your members injured unnecessarily, or worse still, killed. The game requires a minimum of two members within the squad, so the moment the count drops to one, it's curtains for you. On top of all of those considerations, each party member also features varying levels of skill in various tasks - some are skilled in diplomacy, others in combat, and some have bulkier physiques that let them carry more stuff. As such, it's important for players to quickly identify and capitalise on these advantages as soon as they can - it makes the playthrough that much more tactical and interesting. 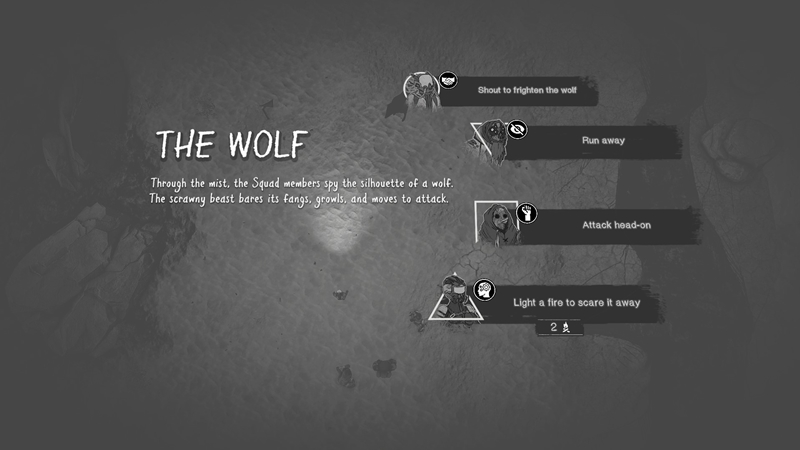 As for playthroughs themselves, the game will allow you to create custom stages once you've cleared the game for the first time, or as the game refers to it, "completed and Expedition". This function allows you to go back and try out new strategies and approaches - you may have opted for a stealth approach the last time around, so why not try being aggressive this round, and so on.. However, this seemingly-beneficial element in the game is also its Achilles' heel. Sure enough, while the game does provide lots of room for you to try different approaches, you could also say that there is also hardly any incentive to do so apart from getting achievements. The most that can be argued is that you'll replay it for a chance to see the different endings, but that might not be a good enough reason for some players to pick it up again.

But even with that in mind, this flaw of sorts still doesn't come close to beating the monstrous tactical appeal of Ashwalkers' core gameplay formula. The sheer amount of decisions and potential effects on your playthrough encapsulated within the game are nothing short of impressive, and to call this aspect expansive would probably still be an understatement. At the very least, I know I had fun reviewing it, and I will probably continue to have fun for a good amount of time after this.

Success is a journey 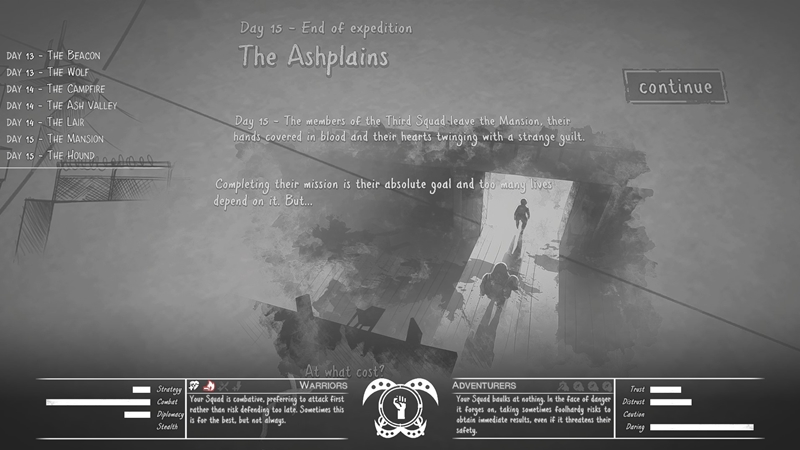 So, to cut a long story short, Ashwalkers is a game where the significance of the journey dwarfs the impact of the ending, and the open-ended nature of its narrative ensures that each playthrough will always be ever so slightly different from the last. Couple that with a tastefully bleak but enrapturing portrayal of a post-apocalyptic world, and what you've got is a surprisingly replayable test of cunning, shrewdness and tactical acumen for anyone willing to step up to the plate.

Write a Review
Tactical aspect is easy to learn, but hard to master
Offers numerous approaches for players to try out
The narrative hits a surprising number of emotional notes
Aesthetics are impressively detailed despite the narrow colour palette
RNG is a thing
Paths can be somewhat misleading and cause you to waste resources
Slow walking speed can be slightly annoying at times
Replayability elements might not appeal to all players
RNG is still a thing
Our articles may contain affiliate links. If you buy through these links, we may earn a small commission.
Sponsored Links