Note: This article was first published on 12th March 2018. 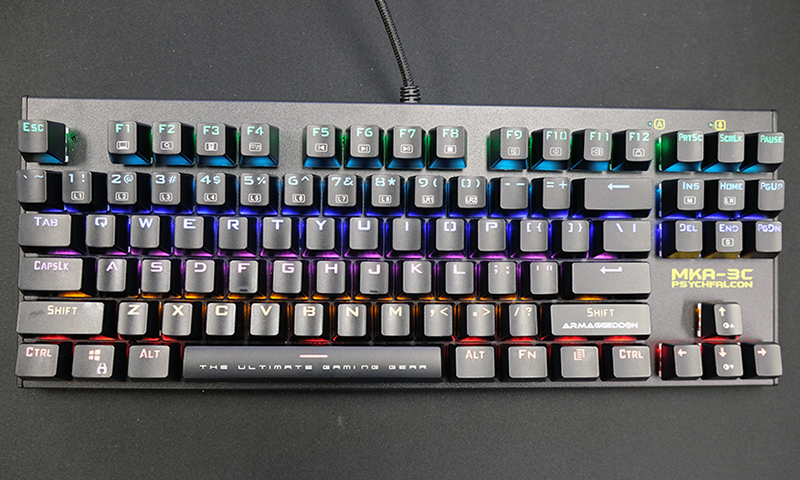 The barriers to getting a mechanical keyboard are coming down. The deluge of more affordable Cherry MX clones translates into cheaper keyboards, and the price of going mechanical is no longer that prohibitive.

The Tecware Phantom RGB mechanical keyboard I reviewed recently is a great example of an entry-level mechanical keyboard for anyone looking to dip their toes in these waters. At just S$79, it offers great bang for your buck, and is frankly a lot better than its price suggests.

Armaggeddon’s MKA-3C Psychfalcon keyboard offers much of the same. It costs a supremely palatable S$59.90, and is targeted not at keyboard enthusiasts, but at gamers on a budget who want to see what all the fuss is about. I have to say though, if you don’t yet own a mechanical keyboard in 2018, you owe it to yourself to go get one.

2017’s version of the Psychfalcon has been much improved compared to its predecessor. While previous reviews cite problems such as abrasive keycaps and poor build quality, I don’t see these problems on my review unit. 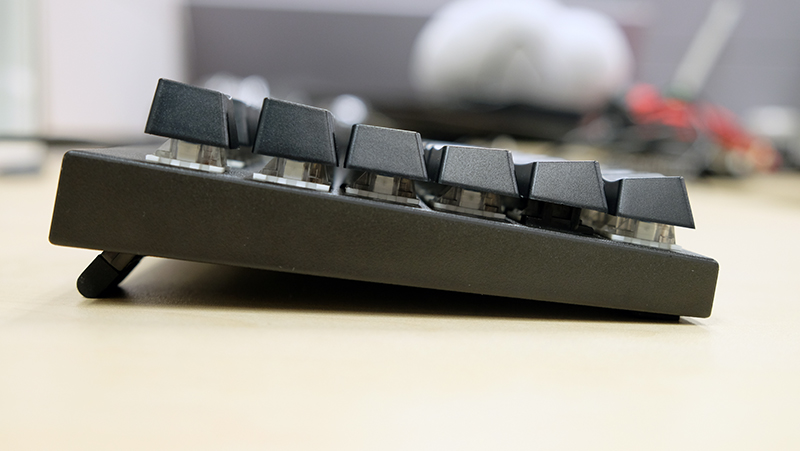 For starters, the keyboard feels fairly weighty at 976g. It’s definitely not as solid or heavy as something like a Filco, but it doesn’t feel like something you picked up from the bargain bin either. The metal body feels stiff and rigid, with no discernible flex to its chassis. As with the Tecware keyboard, I’m pleasantly surprised that the super affordable pricing hasn’t led to huge compromises in terms of build quality.

I should point out that the weight has gone up by around 100g compared to its predecessor, so that likely contributed to the more robust chassis this time around. I also like how sturdy the keyboard feet feel, which wasn’t something I was expecting at this price point.

The Psychfalcon is outfitted with Outemu Blue switches, which are very similar to Cherry MX Blues. They are tactile and clicky, and feature an operating force of around 60g. The very distinct click that comes with every key press means that they are also very noisy to type on, so you’ll want to bear that in mind if you intend to use this keyboard in the office.

These switches are also modular and hot swappable, so you can pluck them out and replace them with a new switch if you do get bored of how they feel. That’s similar to what Tecware offers, and it’s nice to see this level of flexibility at this price point. The Psychfalcon ships with a keycap puller and a separate switch puller (and two spare switches), so you’ll have all the tools you need to change things up right out of the box. 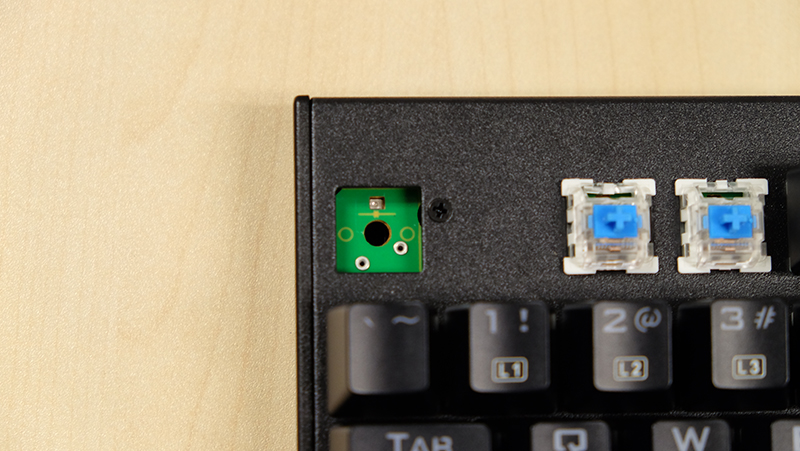 Removing a switch is easy – once you’ve got the keycap off, all you need to do is grip the top and bottom of the switch and give it a firm pull. I don’t see anyone having trouble with this, even someone who has never done this before. 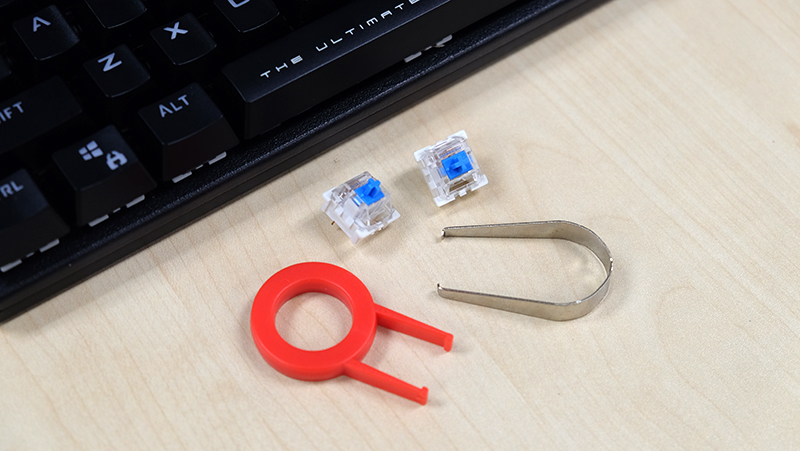 The keycaps are constructed out of ABS plastic, which is known to wear easily and take on an unpleasant shine over time. Still, this is pretty much standard fare for most keyboards, even those that cost twice or even triple the price, so I can’t really fault Armaggeddon here. 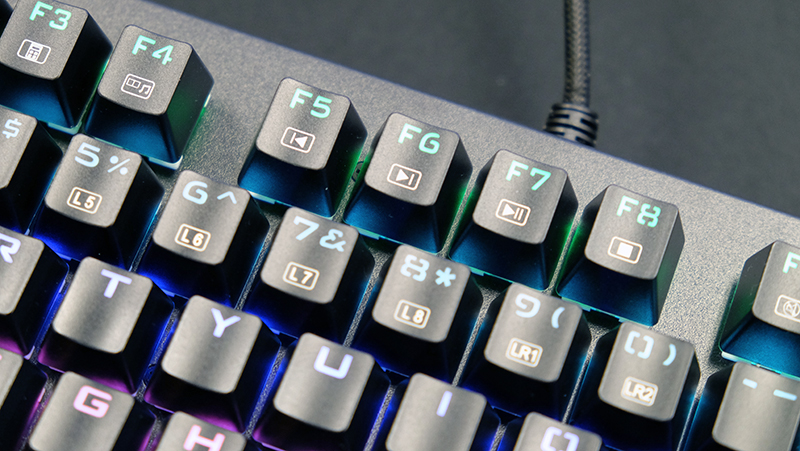 Pad printing is one of the cheapest ways of applying legends to a keycap, and they’re known to fade over time. Unlike something like dye sublimation, where the ink penetrates the plastic, the layer of ink just sits on top and is susceptible to daily wear and tear. That said, Armaggeddon is claiming that its legends are more resilient than usual, and it’s backing that up with a lifetime fade-proof warranty.

That’s encouraging, but it still falls short compared to the Tecware Phantom RGB, which uses doubleshot keycaps. These are comprised of two separate pieces of plastic molded together, so it’s literally impossible for the legends to be scrapped off or fade. Despite what Armaggeddon is saying, doubleshot molding is simply the superior method, and you don’t need any lifetime guarantee to know that the legends won’t wear off.

Finally, the Psychfalcon features RGB lighting for those who like their LEDs. The good news is that the lighting is quite even, as the keycaps with dual legends have them sitting side by side, so they’re both sitting directly above the LED.

The keyboard supports true driver-free operation, and you’re meant to do everything on the keyboard itself. This means you don’t get more advanced features such as per-key RGB backlighting (the Tecware keyboard had this) and are limited to just nine different lighting effects and nine game lighting profiles. 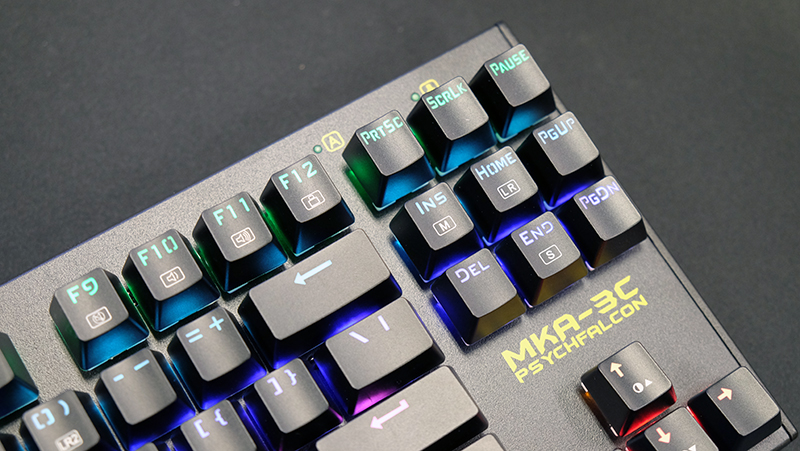 There are three different brightness levels, and you can adjust this using the Fn button and the up and down arrow keys. However, if none of the presets appeal to you, you can also program your own on the keyboard itself. I won’t dive into the details here, but the keyboard ships with a helpful instruction slip on how to do this.

However, you won’t find the same breadth of options on something like the Ducky Shine 5, and you’re mostly limited to picking which keys are illuminated. Each row of keys appears to be assigned a specific color, and it’s something that you’ll notice even with the lighting presets.

Overall, it’s difficult to complain about the Psychfalcon given how affordable it is. I’m not a fan of the design and the obvious branding on keys like the spacebar and right Shift, but these are hardly deal breakers. Furthermore, while I also don’t like the pad-printed legends and somewhat lackluster lighting effects, it seems uncharitable to nitpick at this price point.

Like the Tecware, the Psychfalcon managed to surprise me. It offers decent build quality, modular mechanical switches, and RGB lighting for just S$59.90, and if that isn’t a steal, I don’t know what is.

That said, the Psychfalcon is also a tenkeyless model, so that accounts for it being cheaper than the full-sized S$79 Tecware keyboard. As a result, I'd say that the Tecware Phantom RGB overall offers better value, given the additional features it has under its belt and the fact that it doesn't cost much more either.

Write a Review
Compare This | Specifications
Extremely affordable
Modular switches
Decent build quality
Pad-printed legends
Limited lighting customizations
No detachable cable
Competition offers better for not much more
Our articles may contain affiliate links. If you buy through these links, we may earn a small commission.
Sponsored Links