Apple Watch Series 7 review: Solid and capable, but not groundbreaking

Note: This review was first published on 13 October 2021.

Have we reached a plateau?

Few people would argue that the last big update to the Apple Watch came in Series 4 when ECG was introduced and it received a completely new case design. If you recall, Series 4 was released way back in 2018. 2018, that seemed like another age. Since then, the Apple Watch has received fewer hard-hitting updates. Series 5 added an always-on display and a built-in compass, and last year’s Series 6 added a blood oxygen level sensor, brighter display, and a faster processor. This year, I’m afraid it’s more of the same. But does that mean the latest Series 7 watches are no longer the best smartwatches around? Are they worthy upgrades? And what does it mean for the Apple Watch in general? Let’s try to answer these questions in this review. 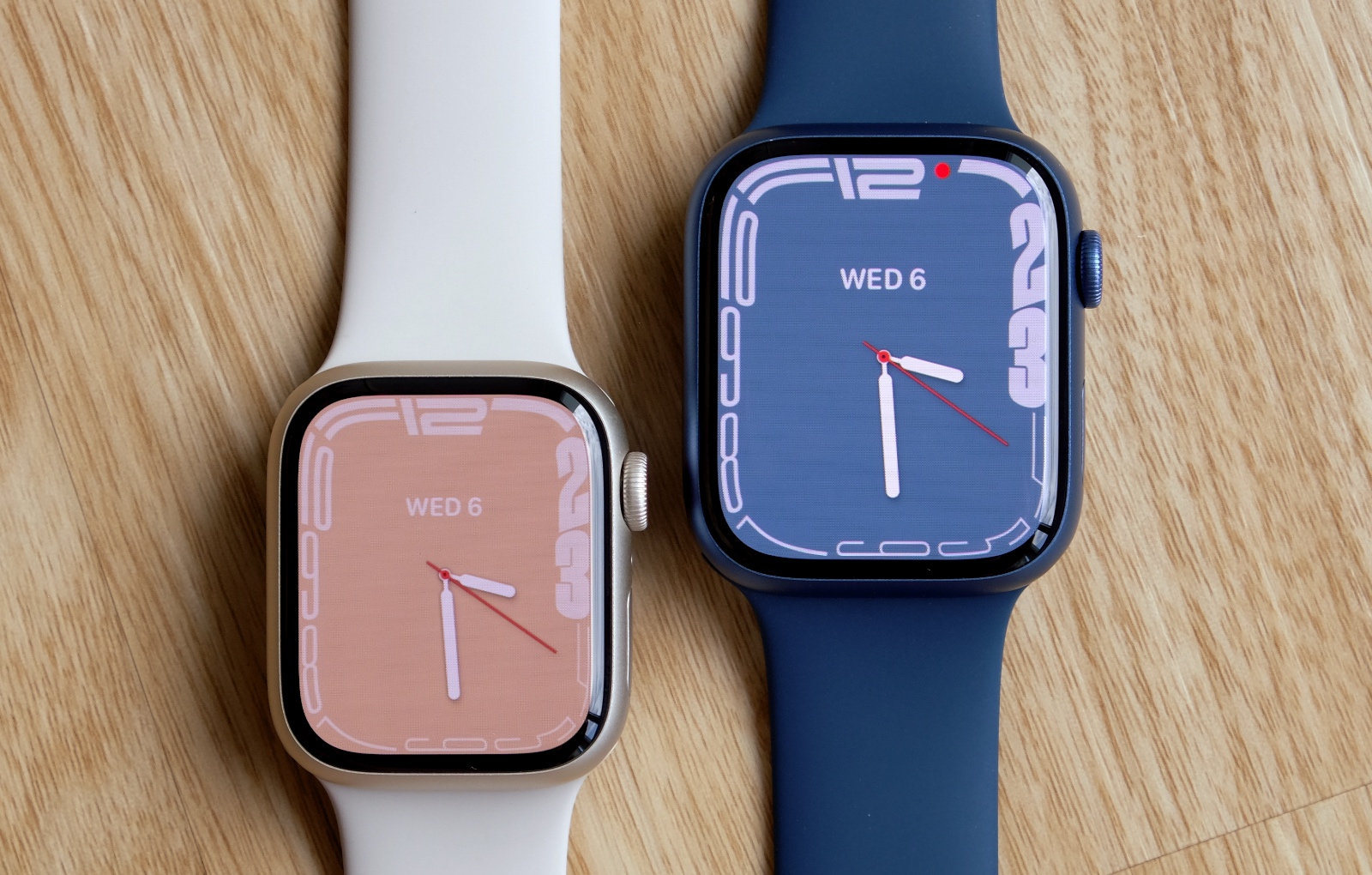 The Apple Watch Series 7 now comes in 41mm and 45mm case sizes and the single biggest and most noticeable improvement is the display. Series 7 still has an always-on display but it’s 20% larger than Series 6’s. The benefits of a larger display are obvious: it’s easier to read and more things can be shown. For example, Series 7 watches contain two additional larger font type sizes. And for the same size text, Series 7 can show up to 50% more text as compared to Series 6. On top of that, Control Centre buttons are 13% larger, Stopwatch controls are 27% larger, and so on. 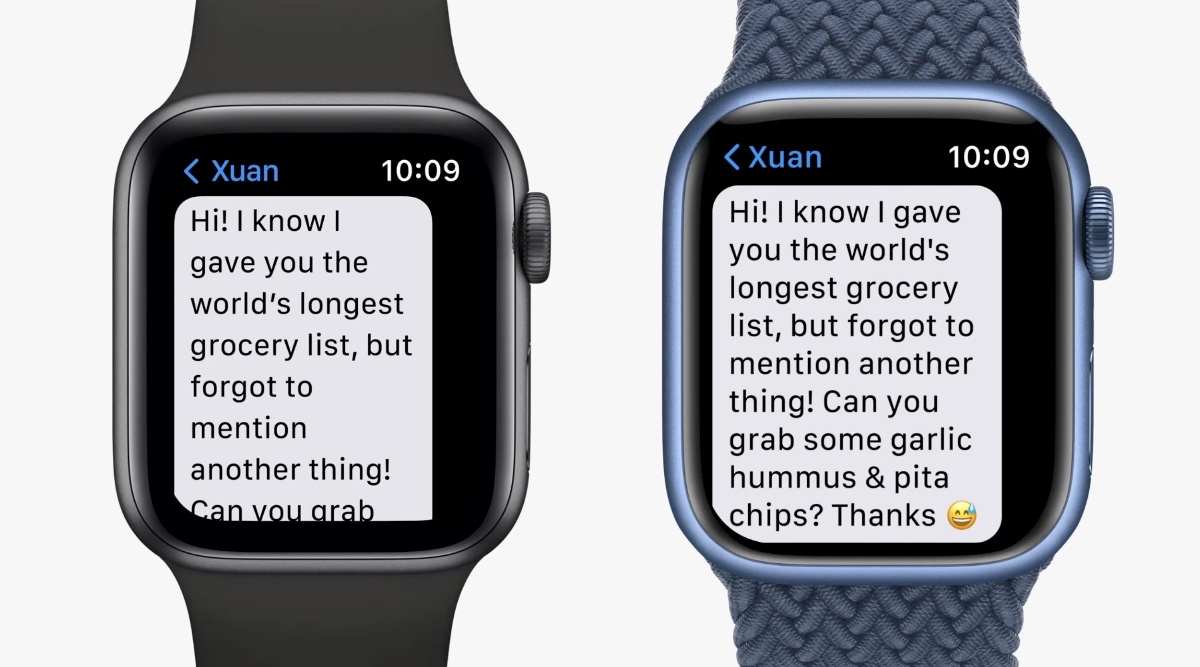 In practice, the larger buttons are unquestionably easier to hit. Series 7 also shows you more text but since how much it shows is partly dependent on the way the text is formatted, you are not always going to see exactly 50% more. Nevertheless, the larger display is undoubtedly a good thing. This is doubly true for the smaller 41mm Series 7 watch because that watch’s display now comes very close to that of last year’s 44mm Series 6. 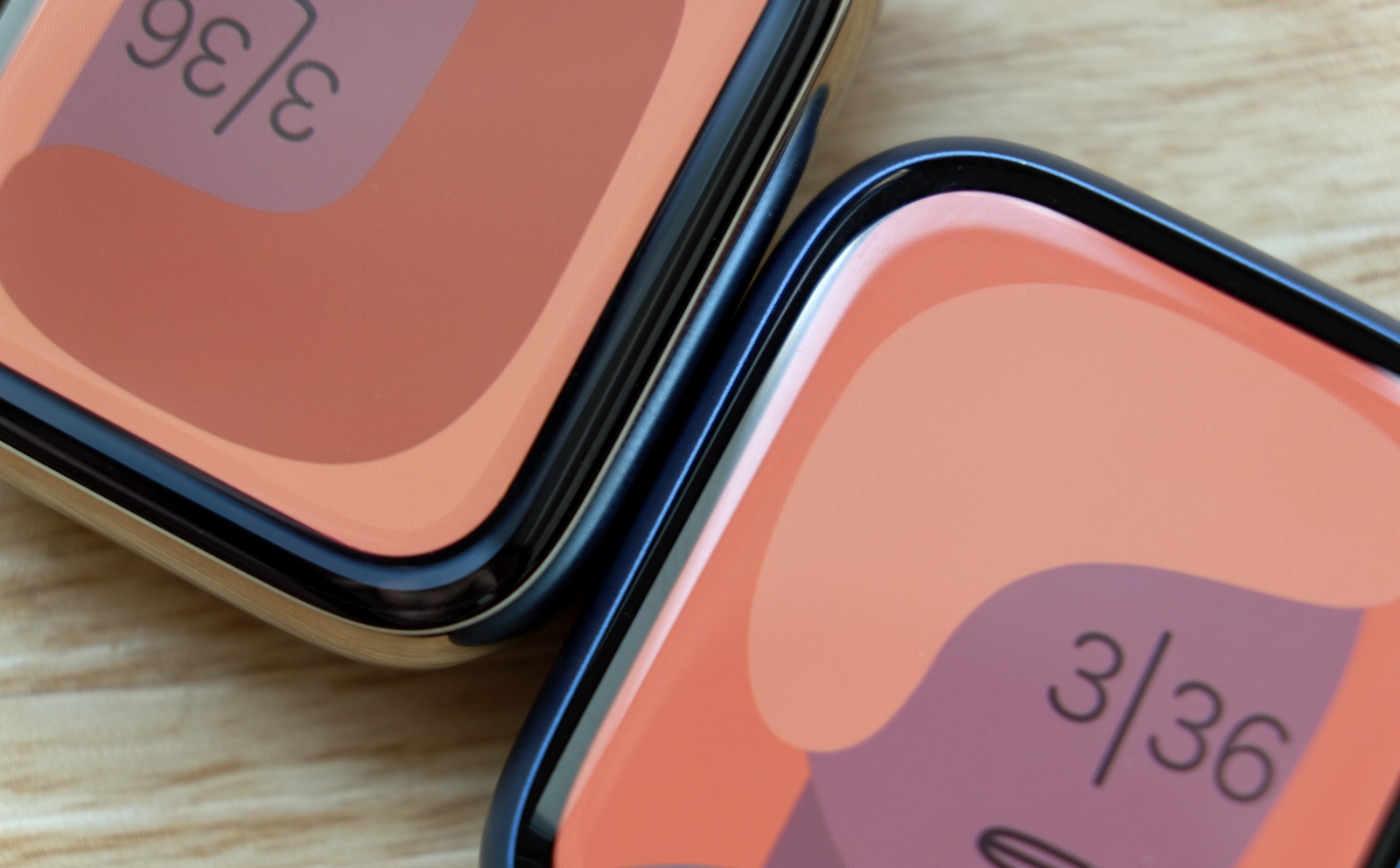 Owners of older Apple Watches only need to take one glance at the new Series 7 watches to know that the larger display was partially achieved by having thinner bezels. I should know because I have criticised the thick bezels umpteen times in the past. According to Apple, the bezels are now just 1.7mm thin which is 40% thinner. But more importantly, the display finally looks as if it stretches to the edges now. This is especially apparent if you use a coloured watch face.

To take advantage of the new display, the Series 7 watches get two exclusive new watch faces: Contour and Modular Duo. The former features hour indexes that stretch right to the edge of the display while the latter can display two extra-large complications. 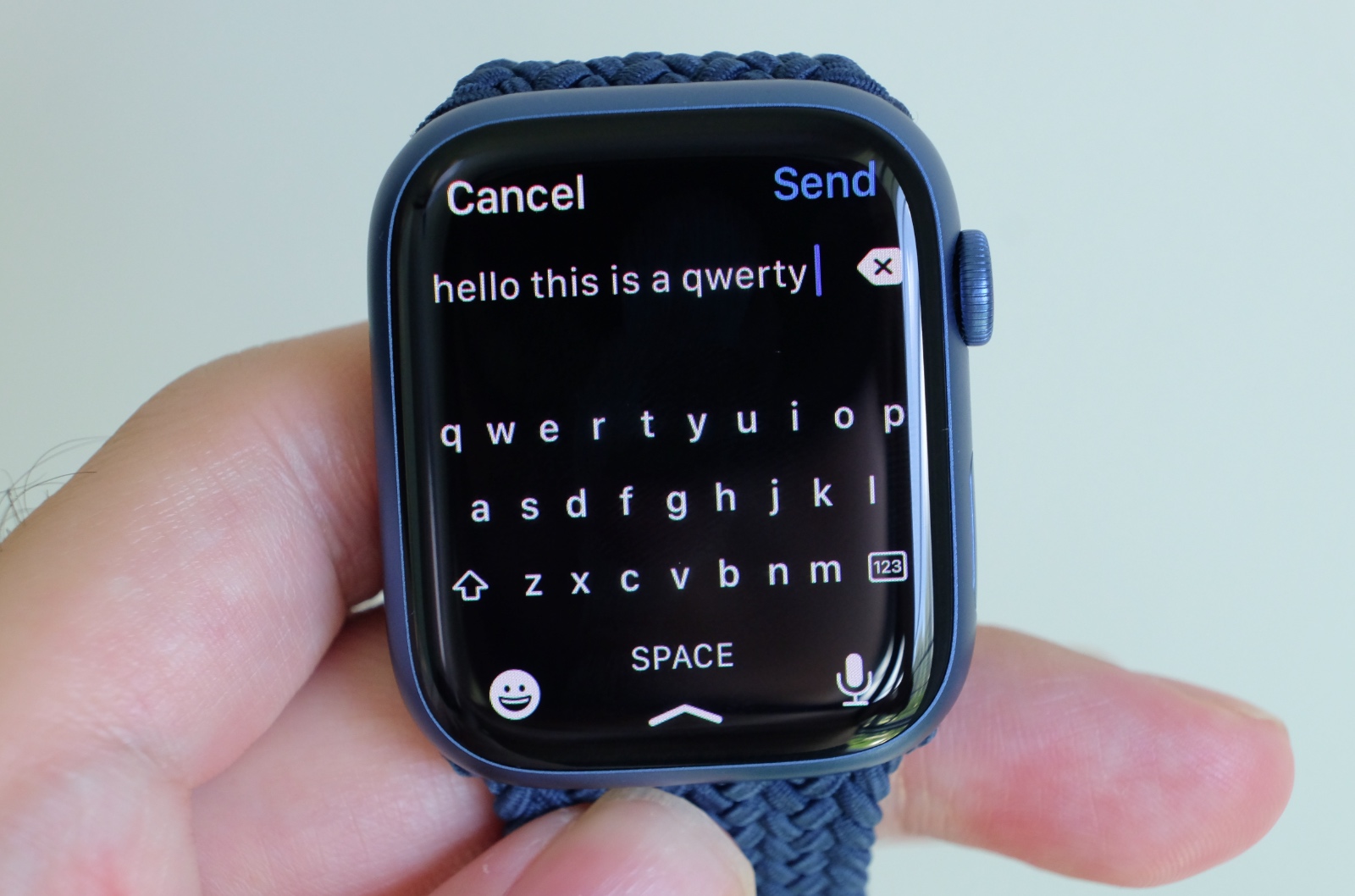 Also, Series 7 watches will be the first Apple Watches to feature a full QWERTY virtual keyboard for text inputs. While these new features are nice, one suspects that they are exclusive to the Series 7 by choice. Apple says a full QWERTY keyboard is possible because the displays are larger than ever and one could certainly argue that these features can’t be properly integrated on last year’s 40mm watch, but what about the larger 44mm? That watch’s display is just as large, if not larger than the new 41mm Series 7. Oh well.

The QWERTY keyboard is a nice addition but it needs some getting used to. Regardless of the additional real estate, the fact remains that you are typing on a small screen. You can tap or swipe to invoke QuickPath and the watch will use machine learning to predict what you are trying to type. For the most part, it’s eerily accurate so I can certainly see myself switching over to the QWERTY keyboard from the Scribble method. 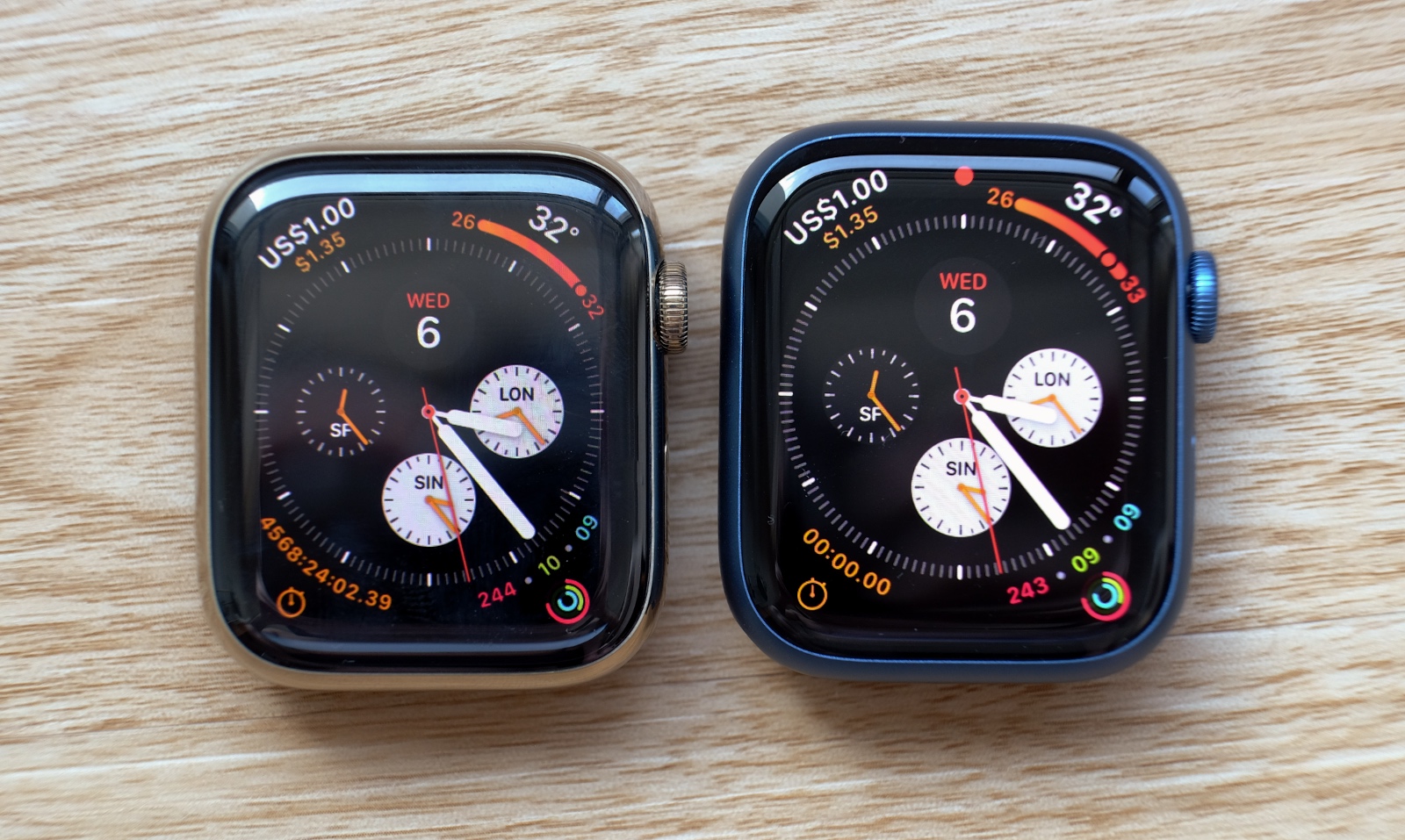 Apart from being larger, the new displays are also brighter. Apple says it is up to 70% brighter indoors when your wrist is down and while I can’t confirm the accuracy of that figure, what I can say is that the always-on display is very noticeably brighter. This is great if you find yourself in a situation where you have to check the time or complication discreetly without raising your wrist. 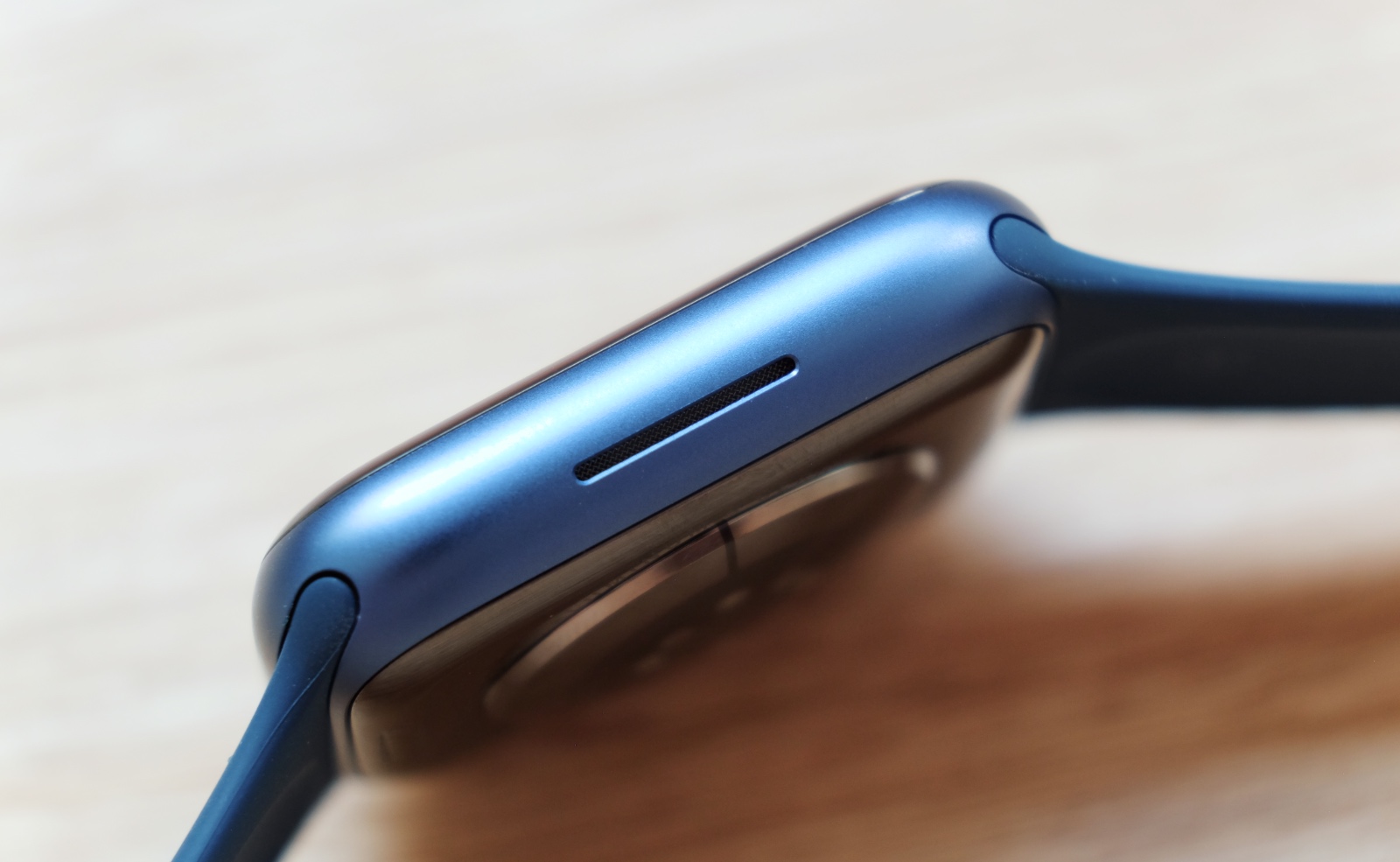 Anyway, what’s amazing is that despite the larger display, case sizes have only gone up by just a tad. The distance from the top of the watch to the bottom has increased by a single millimetre while the case width has increased by just 0.4mm. Case thickness is completely unchanged.

To hide the extra girth, the case design has been tweaked. The corners are softer, more rounded, and the front crystal now stretches to the edge to create what Apple calls “a subtle wraparound effect” where you can see more of the display from an off-angle. Speaking of the crystal, it has a revised geometry and profile so it’s over 50% thicker at its chunkiest point. This makes it more resistant to cracks. And since we are on the subject of durability, Series 7 is also the first Apple Watch to be IP6X dust-resistant. Water resistance is unchanged at 50 metres so you can take these watches swimming. 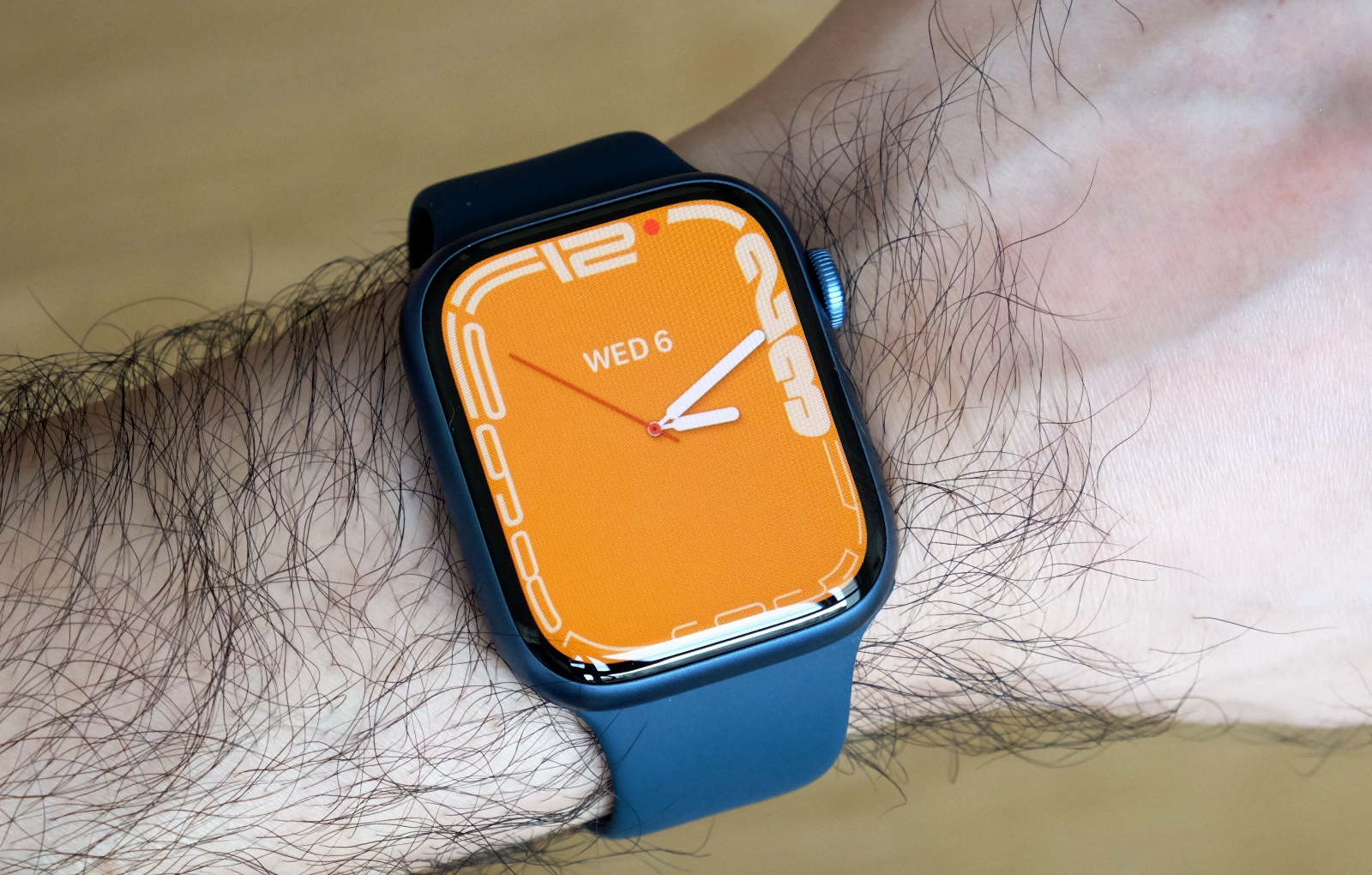 Crucially, the new 45mm Series 7 doesn’t look nor feel any chunkier than the old 44mm Series 6 on the wrist. It fits just as well and is just as comfortable. What’s irrefutable, however, is that the larger display vastly improves legibility. Also, the thinner bezels give these new watches a sleeker look. Oh, and don’t worry, the new Series 7 watches are completely compatible with existing straps. 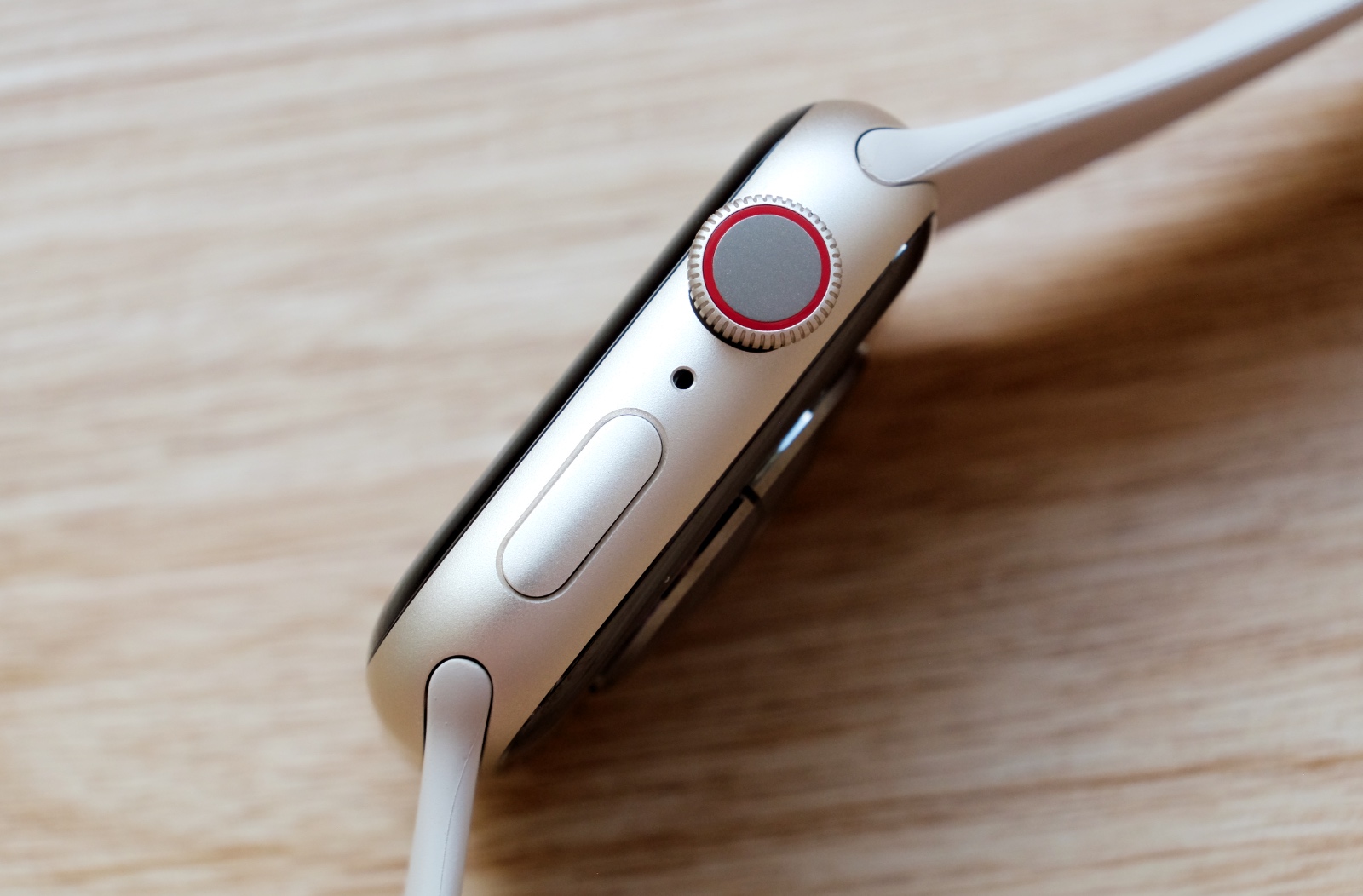 Still on the topic of looks, you can get the Series 7 watches in three case materials – that hasn’t changed. They are aluminium, stainless steel, and titanium. The aluminium finishes are new and they are Midnight, Starlight, Green, Blue, and (PRODUCT)RED. Though we had Blue and (PRODUCT)RED last year, this year’s finishes are said to have richer brighter hues. Starlight is arguably the most interesting colour as it looks like a mix of silver and gold. The finishes for stainless steel and titanium are said to be the same. The unit I have is Blue.