Apple Watch Series 5 review: The best smartwatch gets even better

Introduction, what's new, and what's not

Note: This article was first published on 24 September 2019. 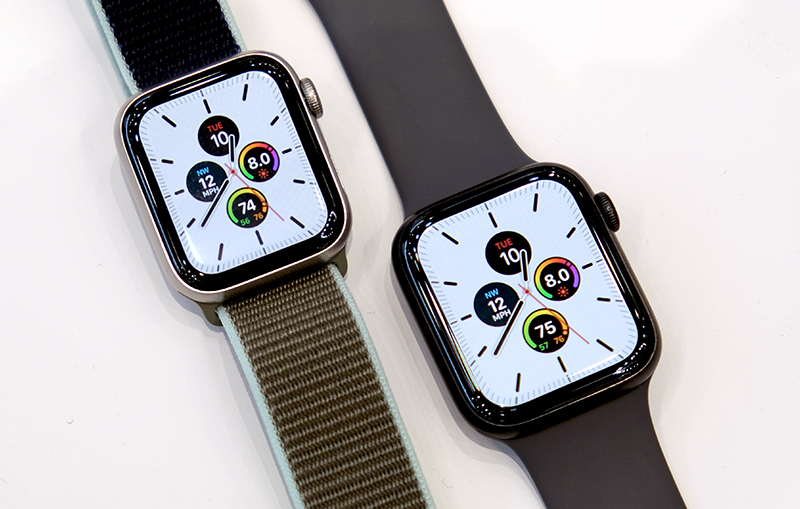 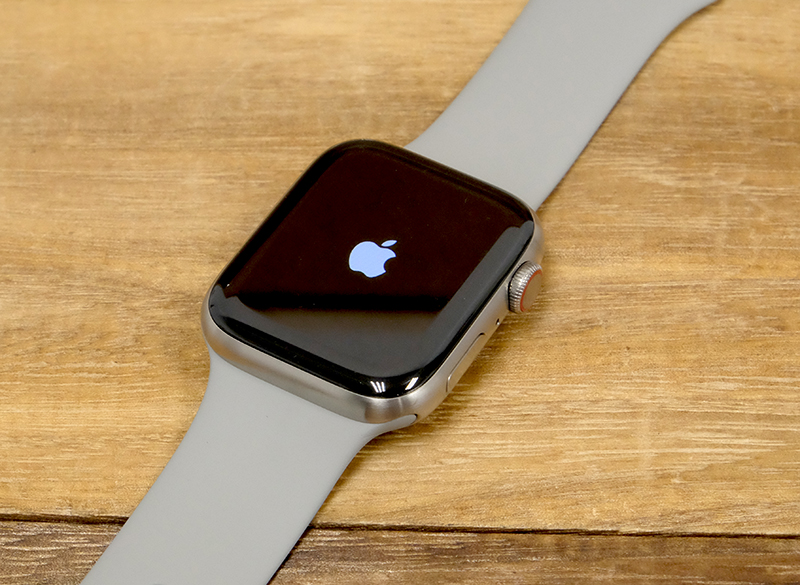 Before I talk about what's new, I should talk about what's unchanged. Last year’s Apple Watch Series 4 saw a dramatic change in case design. 38mm became 40mm and the 42mm became 44mm. It got wider but it also became substantially thinner and that made it wear a lot better. The new Series 4 case meant it slid under shirt cuffs and sleeves more easily. The overall dimensions are much more refined and this year’s Series 5 watches retain the same case shape and dimensions. It also means that your straps will work with this year’s watches. Also, water resistance remains the same at 50 metres so you can take the Apple Watch Series 5 swimming with no issues.

Display size and resolution are also unchanged. And the new S5 processor is said to be identical to the S4 processor except that it has additional some additional sensors and more storage — up from 16GB to 32GB. The increase in storage space means you can store more songs on the watch and listen to them through your wireless headphones. It also means you can install more apps. 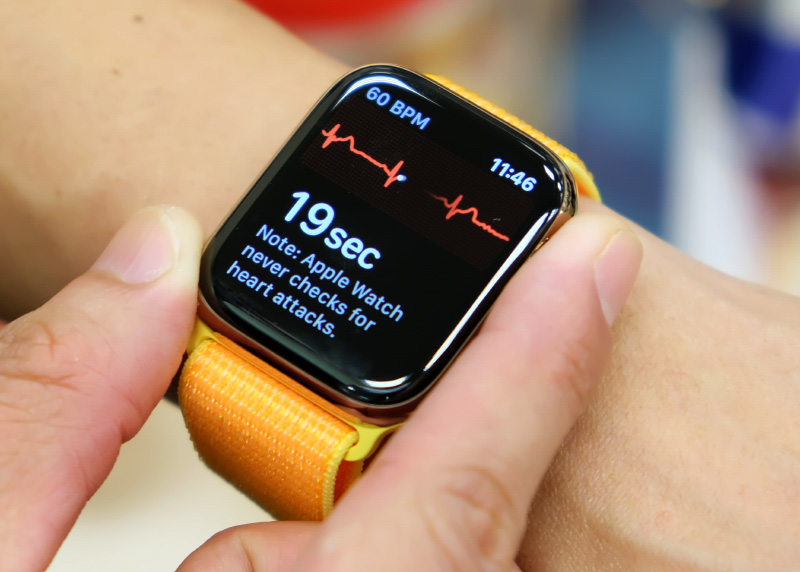 Read more about the ECG function on the Apple Watch Series 4 and Series 5 here. 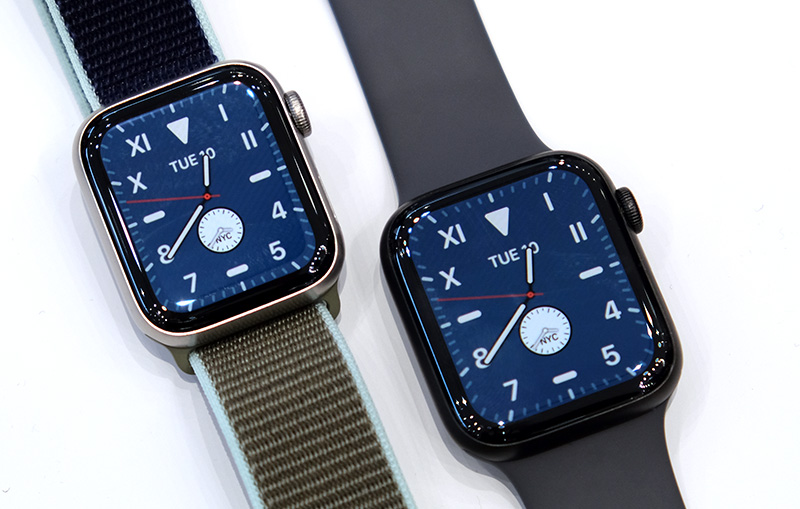 The big news is that it finally has an Always-On Retina display. It has taken Apple over four years but it has finally given the Apple Watch a display that never turns off. For some people, this is a big deal because it means you don’t have to do that exaggerated raise your wrist to your face action to tell the time. It doesn’t sound like much but it’s exceptionally handy if you are in a situation like a long boring meeting with important people or if you are doing something particularly challenging like the Taraksvasana yoga pose (yeah, go look it up). 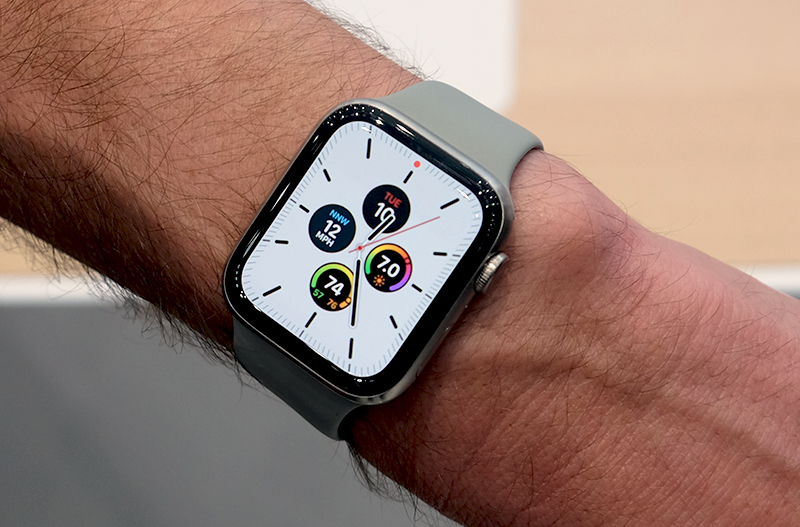 This is achieved using an LTPO (low-temperature polycrystalline oxide) OLED display. Wait a minute, wasn’t Series 4 using an LTPO display too? Yes it was, but it lacks a few crucial ingredients. Series 5 pairs the LTPO display with a new ultra low power display controller, new power management integrated circuit, and ambient light sensor. As a result of this, the Series 5’s display can adjust its refresh rate from as high as 60Hz to as low as just 1Hz. 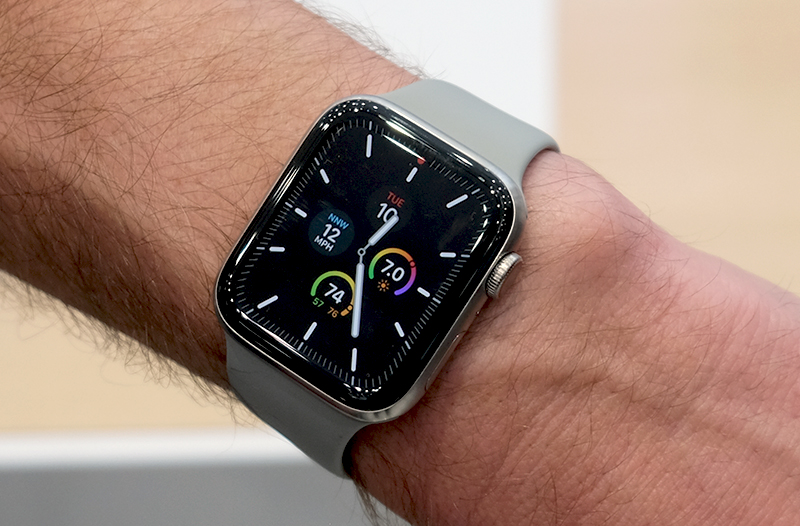 When the display goes to sleep, it doesn’t just show a generic watch face. It actually shows a dimmed version of your selected watch face. The second hand also goes away so that it reduces the need to update the display. Some of your complications (like Date and Activity) will still show but some others that require constant updating (like the new Noise and Compass app) will go to sleep. 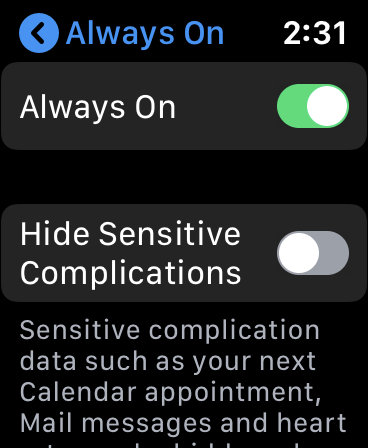 There’s also an option in the Settings to mask sensitive complications so that information like your calendar appointments, heart rate, mail and messages won’t be displayed. That said, it’s worth noting that notifications are never displayed when the display is in sleep mode. You can also turn this display off entirely in rest mode like older Apple Watches if you want.

One reason it took Apple so long to give us a smartwatch with an always-on display is because Apple says that it could finally implement it in such a way that it doesn’t hurt battery life. It’s hard to test this but I found my Series 5 watch to have about 40% of battery life left after about 11 hours of use, which is slightly less than what my Series 4 watch used to have, which is about 55%. This could be because of the additional complications that I have such as Noise and Compass (more on these later). At any rate, the Apple Watch Series 5 still requires a nightly charge. 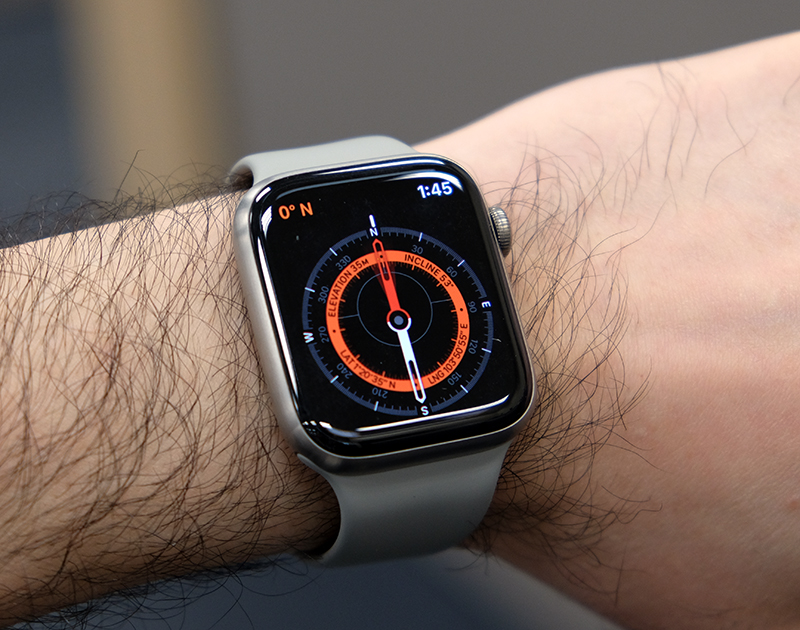 The other notable new feature is the built-in compass. For most people, the new compass is a nice to have feature and can be helpful when you are trying to navigate unfamiliar places, but it’s an invaluable tool for hikers and maybe also cyclists and runners.

The compass app not only shows your heading, it also shows your incline, elevation, latitude and longitude. Thanks to the compass, the Maps app will now also show the direction you are facing, just like what you’d see on your iPhone.

Those thinking of getting the cellular version of the new Series 5 watches will also be happy to know that there is wider support for international emergency calling. You can use your cellular Series 5 watch to call emergency services in over 150 countries even if you don’t have a cellular plan for your watch. This could be a potential lifesaver because who knows what may happen when you are travelling. 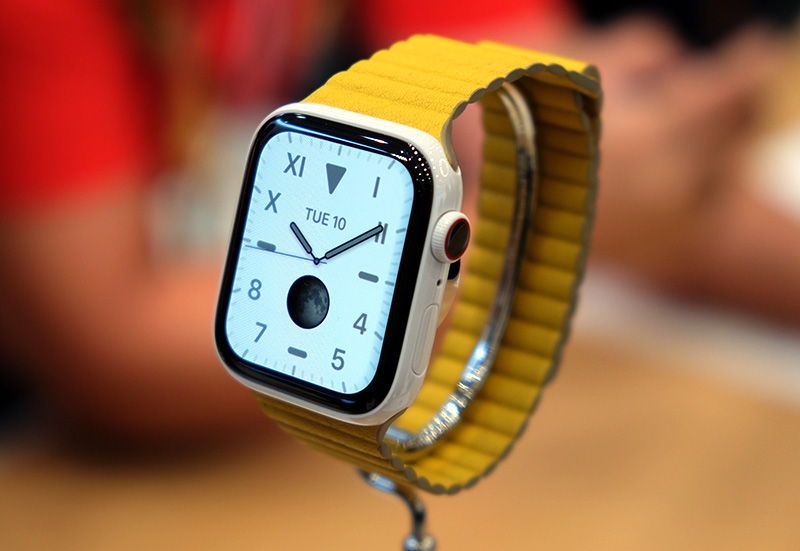 Apple Watch Edition makes a comeback too. This collection was curiously missing from last year’s lineup but it is back now. There are three distinct models here, two in titanium and one in striking white ceramic. The titanium model is available in two finishes: natural titanium and space black. The Apple Watch Edition watches also get an exclusive "Edition" colour — which is best described as a shade of taupe — for their watch faces. 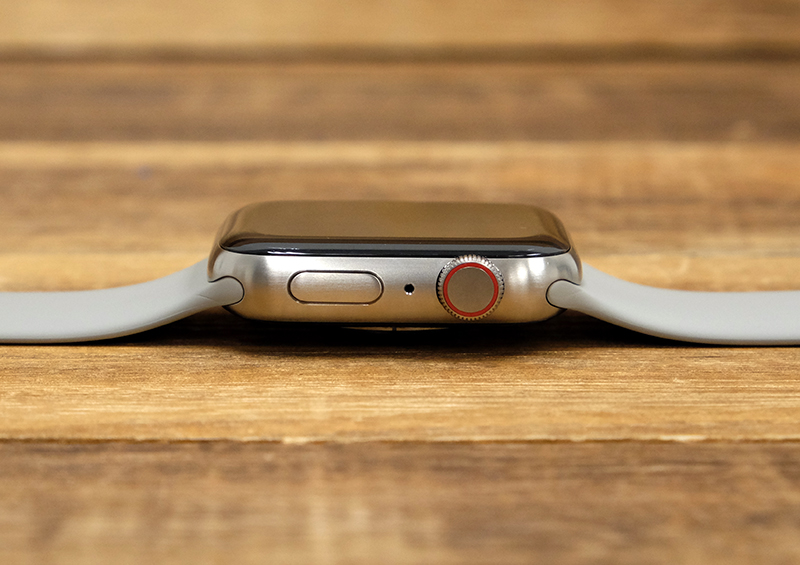 Actually calling it "natural" is a bit of a misnomer because it has obviously been finished and treated. It has a horizontal brushed finish and Apple says it has been given a special custom-engineered surface treatment to resist patina. This is the model that I have been testing and it seems to resist fingerprints and scratches very well. I have been banging it around for the past week and it still looks fairly pristine. It also has this gunmetal hue that is interesting to look at since it slightly changes its shade depending on how light hits it.

The space black titanium also has a brushed finish and is definitely more eye-catching than the natural titanium model. Curiously, I don’t find the titanium models to be significantly lighter than the stainless steel ones. In case you were wondering, of all the case materials, aluminium is the lightest, followed by titanium, ceramic, and stainless steel. 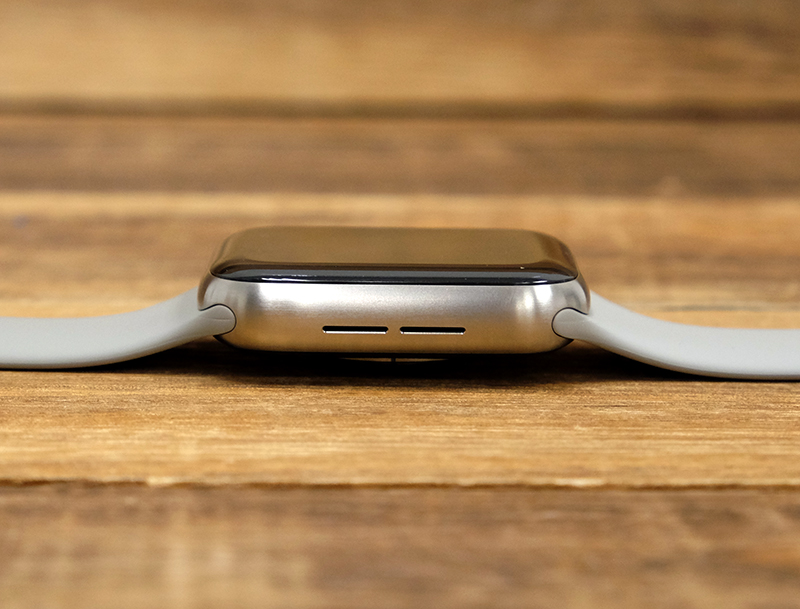 And that’s basically it. These are really the only things that are new and exclusive to the Apple Watch Series 5. The rest of them are enabled by Apple’s new watchOS 6, which I should probably talk about now.

Write a Review
Compare This | Specifications
Class-leading build quality
Gorgeous, always-on display
Strong, effective design
Lots of straps for customisation
Great health and fitness tracking
ECG capability
Built-in compass
Needs to be recharged daily
Only works with iPhone
Pricey
Our articles may contain affiliate links. If you buy through these links, we may earn a small commission.
Sponsored Links