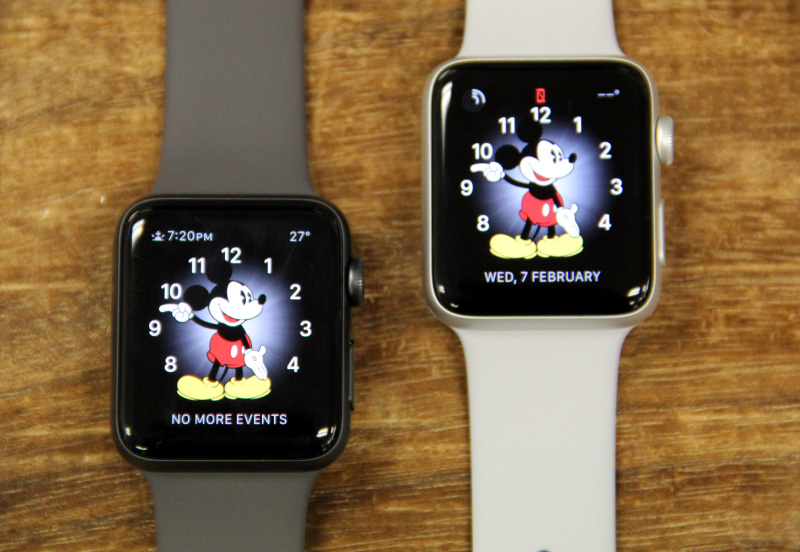 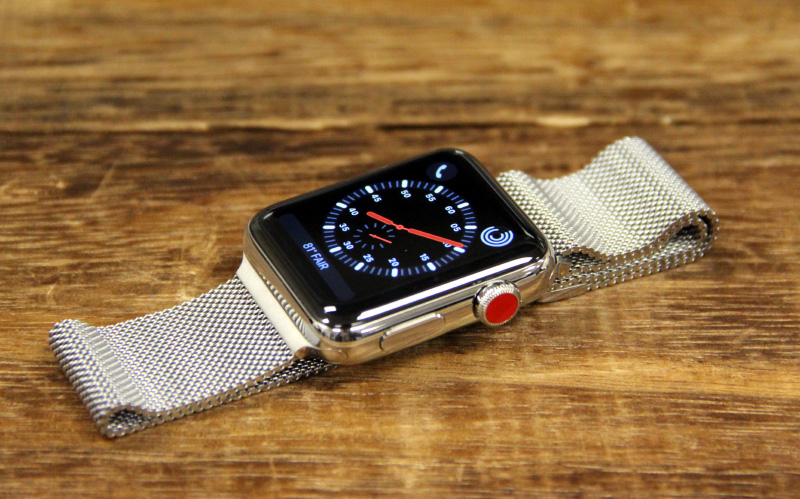 The LTE versions of the Apple Watch Series 3 will also have a red dot on the Digital Crown. Personally, I’m not a fan of this design quirk, but I suppose there will be owners who like it because it distinguishes them as having an Apple Watch that is a little bit special than the others.

And finally, the LTE versions of the Apple Watch Series 3 will also get an exclusive watch face called ‘Explorer.’ It is basically a variant of the ‘Utility’ dial but with a subsidiary seconds dial and a cellular strength indicator at 12 o’clock. Unfortunately, there’s no “cellular complication” so if you are using other watch faces, it can be hard to tell at a glance what your cellular strength is. The only workaround to this is to swipe up to bring up the Control Center and look at the top left corner.

So how do I get cellular connectivity? Do I need to go down to my mobile service provider? 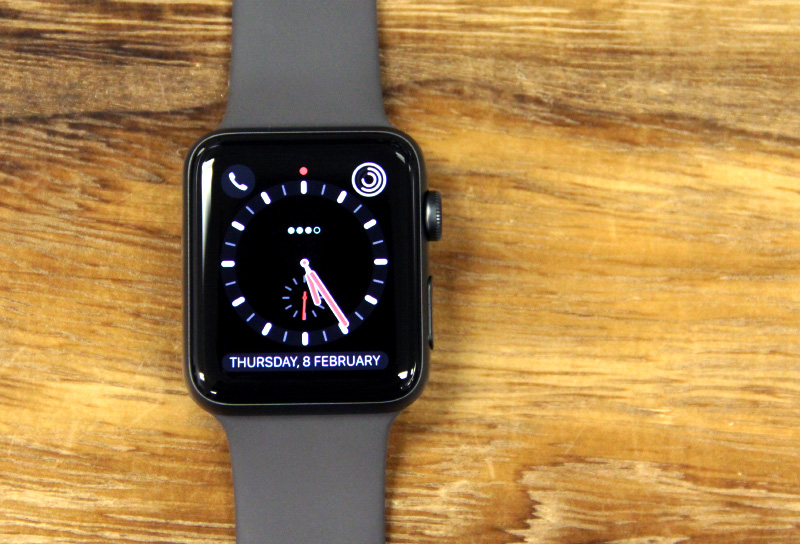 Thankfully, the answer is no. But let’s backtrack a little first. For now at least, the Apple Watch Series 3 LTE will only work if you are a Singtel Mobile subscriber. Customers with other telcos are out of luck.

Getting cellular connectivity to work is easy. SingTel is offering a new service called NumberShare, which shares your existing mobile number with your Apple Watch Series 3 LTE.

What is NumberShare? From Singtel:

NumberShare is an add-on service that allows iPhone users to share the same mobile number, data and talktime as your mobile plan on an Apple Watch Series 3 (GPS+Cellular). With NumberShare, you can make or receive calls and access the Internet on your Apple Watch Series 3 (GPS+Cellular) over 4G connection, even when your iPhone is not nearby or powered on. You can also get an additional 0.3GB data per month on your main mobile line.

A prompt will appear when you are setting up your Apple Watch Series 3 LTE asking if you want to set up mobile data (NumberShare) as well. Just tap on it and you will be brought to a page where you are asked to key in your NRIC. Do so and voila, you are set and ready to go. This is the process that most people will face. However, because of undisclosed limitations, EasyMobile, Prepaid, and Multi-SIM customers of Singtel will not be able to sign up for NumberShare.

NumberShare is available as an add-on service for all Singtel Postpaid Mobile customers who have subscribed to a Combo Mobile Plan, SIM Only Plan or MobileShare Supplementary Plan with 4G ClearVoice. NumberShare can only be activated on Apple Watch Series 3 (GPS+Cellular) and newer models.

Also, you don’t necessarily have to enable cellular connectivity during the initial process. You can set it up later by going to the Watch app and selecting the ‘Mobile Data’ tab. 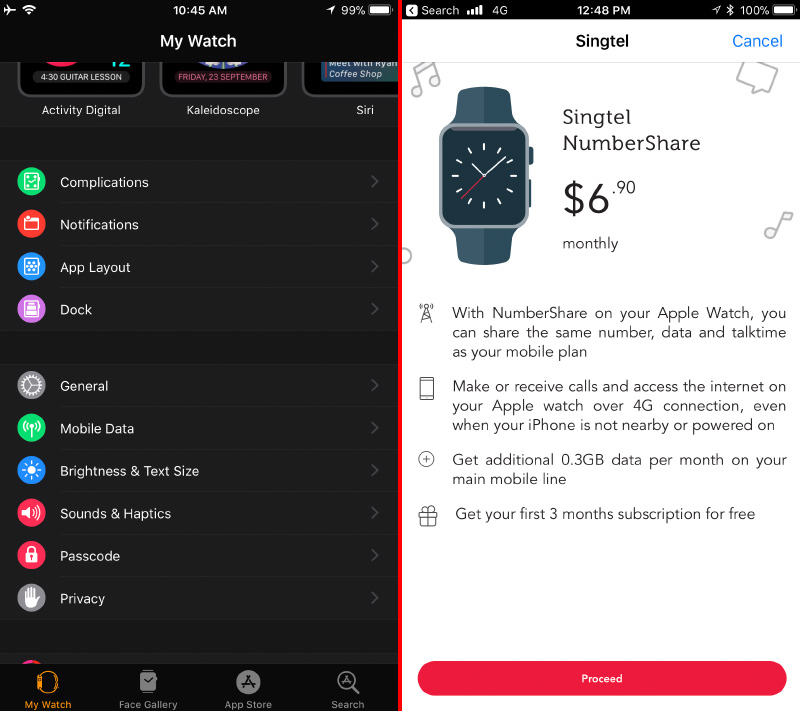 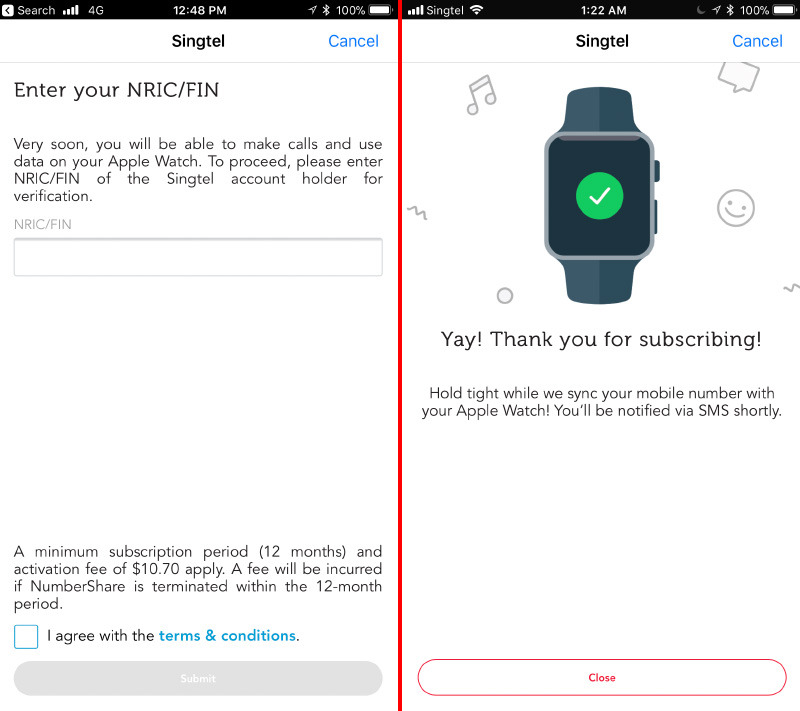 For more information regarding NumberShare, you can check out Singtel's FAQ page here. What's not immediately obvious from the FAQ is this:

Does the watch work without LTE?

Yes, it does. It will work just like the Apple Watch Series 3 GPS.

Does it support roaming?

No, it doesn’t. In the fine print, it says, “Roaming is not available outside your carrier network coverage area.”

Can I buy an Apple Watch Series 3 LTE from overseas and use it here?

Yes and no. The problem lies in the fact that unlike your iPhone, the Apple Watch Series 3 LTE only supports a limited number of LTE bands. If you are feeling adventurous, you could buy from a country that uses the same LTE bands as us. More specifically, the Europe and Asia Pacific versions bearing model numbers A1889 (38mm) and A1891 (42mm).

Write a Review
Compare This | Specifications
Better functionality thanks to LTE
Built-in GPS and heart rate monitor
50-meter water resistance
Strong design, lots of straps for customization
Class-leading build quality
Arguably the best fitness watch you can buy
Battery life takes a dramatic hit with heavy cellular usage
Activity tracking can be a little generous
Even with light usage, still needs to be recharged every night
Our articles may contain affiliate links. If you buy through these links, we may earn a small commission.
Sponsored Links