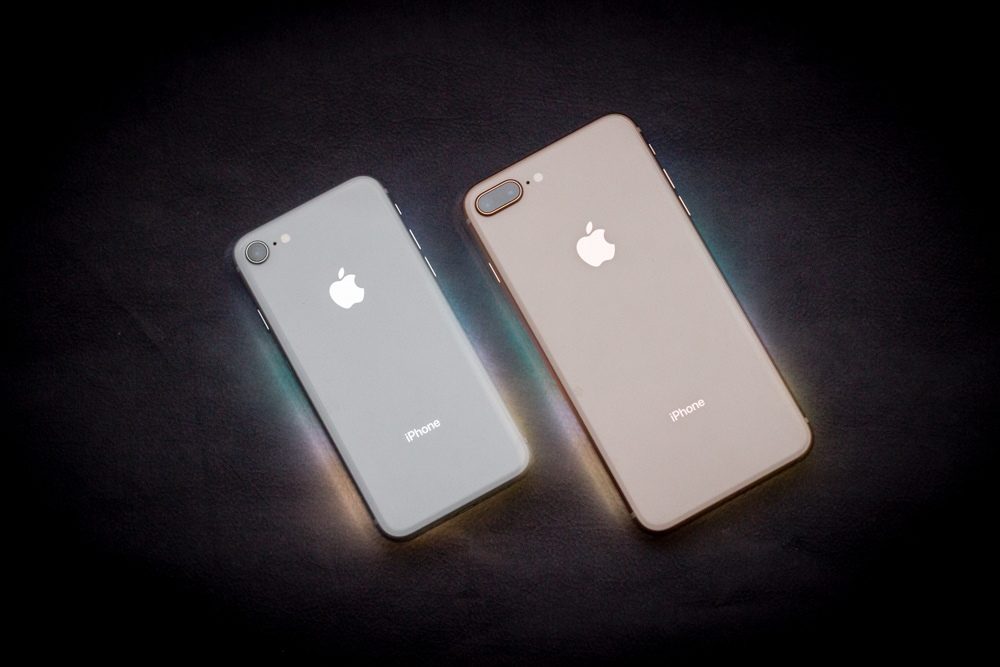 The iPhone 8 cameras ship with new 12MP sensors — yes, that’s the same resolution as the iPhone 7, but the current sensors are bigger. Unfortunately, Apple doesn’t reveal how much bigger, but all things being equal, the bigger the image sensor, the better the image quality. That‘s why a 12MP image shot by a full-frame DSLR outpaces one shot by a phone.

The iPhone 8 Plus comes with a dual camera system, just like on the iPhone 7 Plus, which gives it optical zoom and Portrait mode. The lenses are just as fast, at f/1.8 for the wide-angle and f/2.8 for the telephoto, and like before, only the wide-angle comes with optical image stabilization (OIS). The upcoming iPhone X will be the first and only iPhone to ship with OIS on both cameras.

Colors are natural and true to life 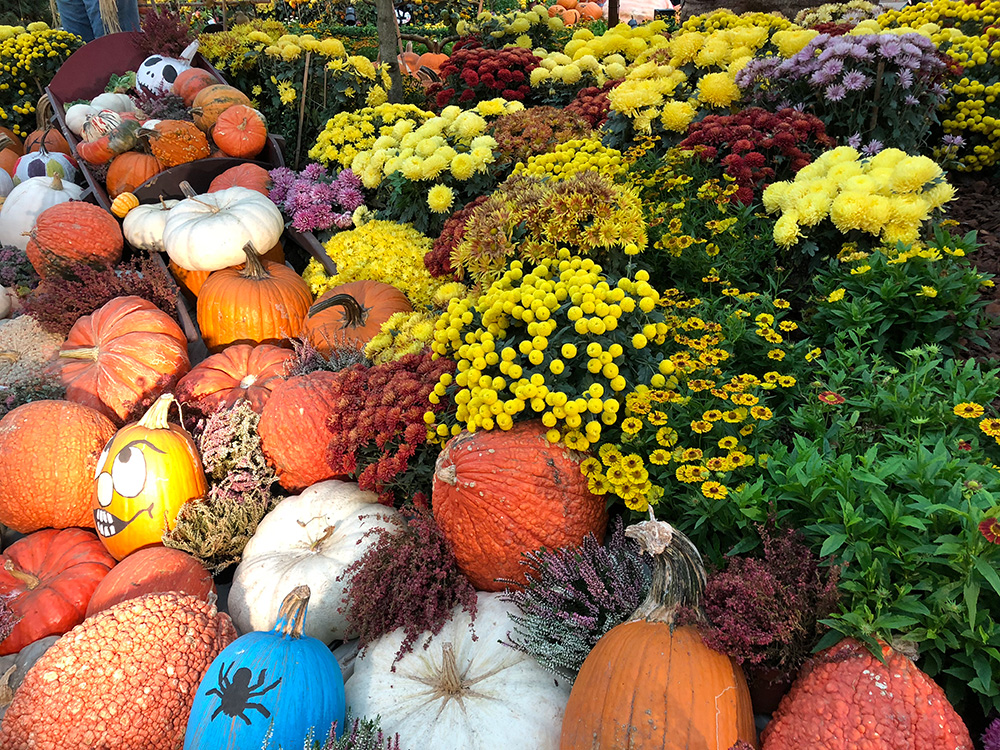 As before, colors are the iPhone’s strong suit. They’re rendered beautifully, with subtle graduations, and remain mostly true to life (more on this in a while). Starting with the iPhone 7, images are saved in the DCI-P3 color space, or what Apple calls Wide Color. The DCI-P3 profile contains more colors than the standard sRGB color space used as default in most cameras, but you’ll also need a display which supports the DCI-P3 color space to see it (most of Apple’s latest products, like the iPad Pro and MacBook Pro, do).

Now, I say the colors are mostly true to life, because the iPhone 8 has an odd tendency to shift blue-green at times, especially when shooting greens in shadow. It’s likely that the ISP (image signal processor) is getting confused about the white balance in these situations. 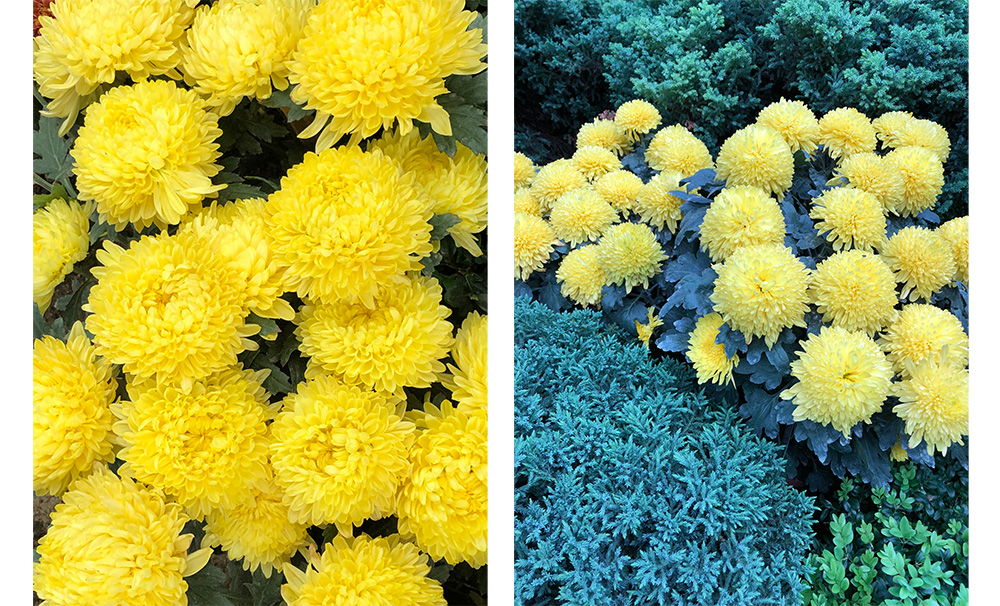 Retaining image detail has never been the iPhone's strength, and that’s true again here. Details are slightly sharper, but I can’t spot significantly more detail in the 8 Plus images than the 7 Plus when I place them side by side. When it comes to shooting with the zoom, the 8 Plus still does that same trick from time to time where it crops and enlarges the image taken with the wide-angle instead, giving you softer details as a result. This is, again, likely because the telephoto still doesn’t ship with OIS. 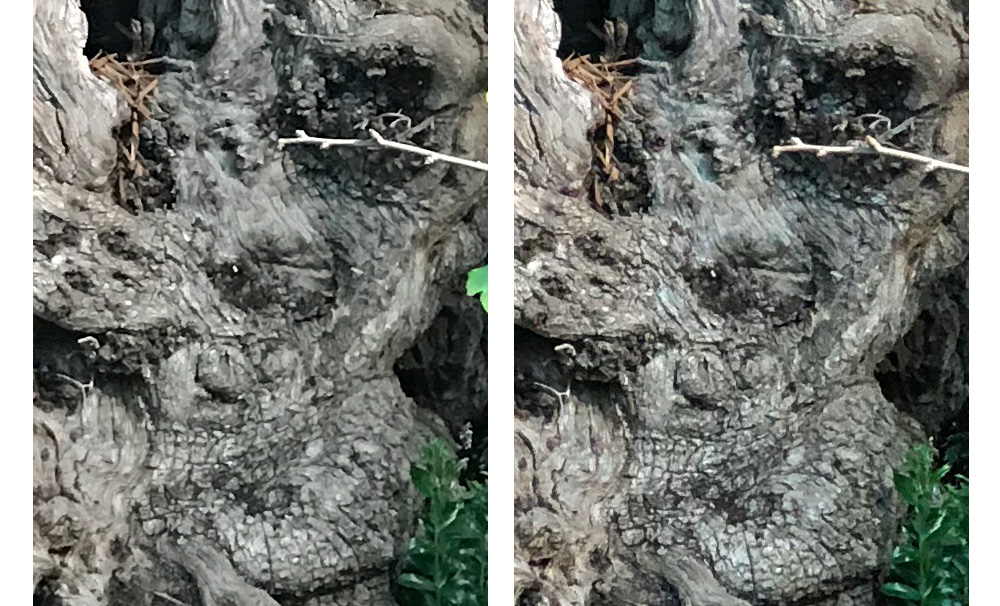 The iPhone 8 is noticeably smarter at metering. Compared with the iPhone 7, which tends to underexpose challenging scenes, the iPhone 8 is better at shooting with a brighter exposure while not blowing the highlights. 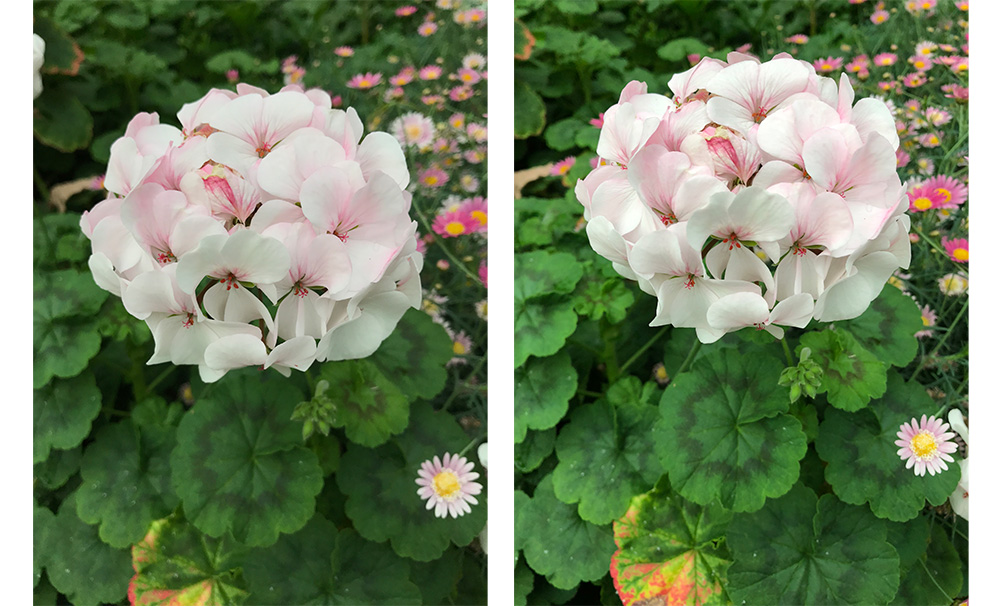 HDR is so much better now 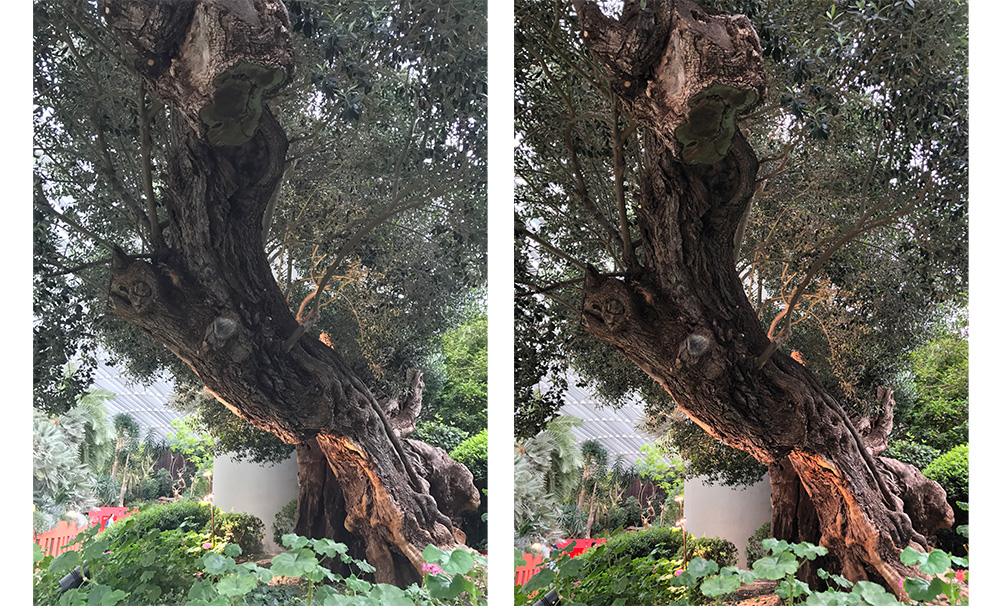 Apple appears to be so confident in the iPhone 8’s HDR capability that Auto HDR is turned on by default on the new iPhones (‘auto’ in this case means that it’ll automatically decide, not that it’ll automatically shoot HDR all the time), and the option to save a normal version of the photo is toggled off. In fact, unless you change it in Settings, the HDR toggle doesn’t appear anymore in the camera UI.

Portrait Mode and Portrait Lighting are a whole lot of fun 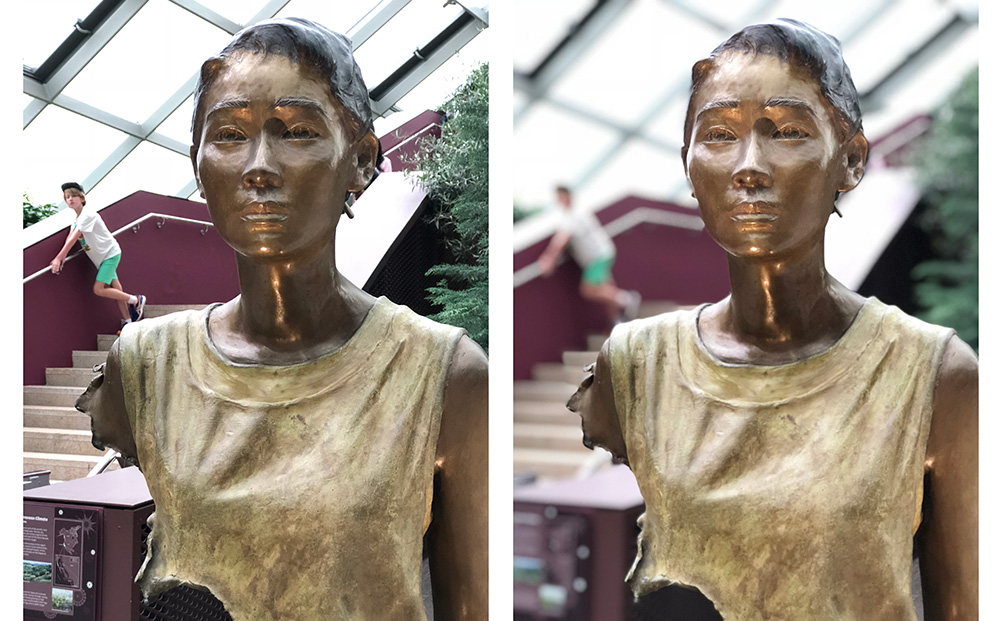 If you want the best camera system on an iPhone, it’s worth upgrading to the 8 Plus for its dual camera system, even if you’re ambivalent about the larger display. The dual cameras give you Portrait Mode, which delivers a faux background blur that makes a big difference when shooting people — without Portrait Mode, for example, the image above is about this woman (pretend it’s a woman) and a boy behind her, with Portrait Mode, it’s just about her.

I’m also having a lot of fun with the new Portrait Lighting (beta) feature, which simulates studio lighting in Portrait Mode. There are five effects, Natural Light, Studio Light, Contour Light, Stage Light, and Stage Light Mono; the looks range from natural and even, to dramatic and striking.

The overall effect is quite natural. The shadows in Contour Light, for example, follow the curves of my face quite accurately, and even the lighting on my neck and shoulders has been changed for a more believable overall result. 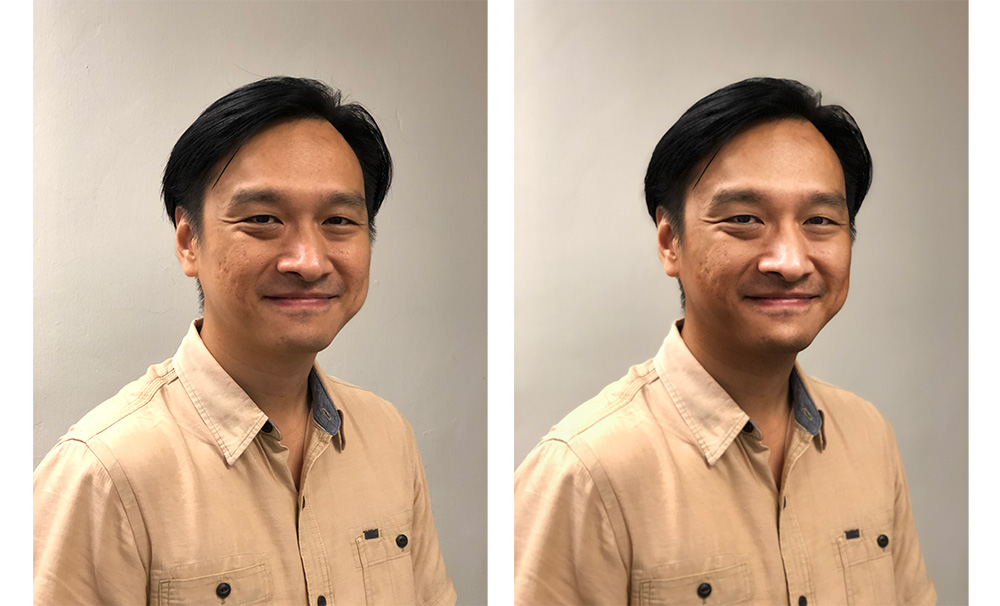 My favorite effect so far is Stage Light, which magically removes the background and superimposes your subject against a black background. Stage Light, however, needs to be quite precise — you need to place your subject at the right distance and angle, and it doesn’t work all the time. 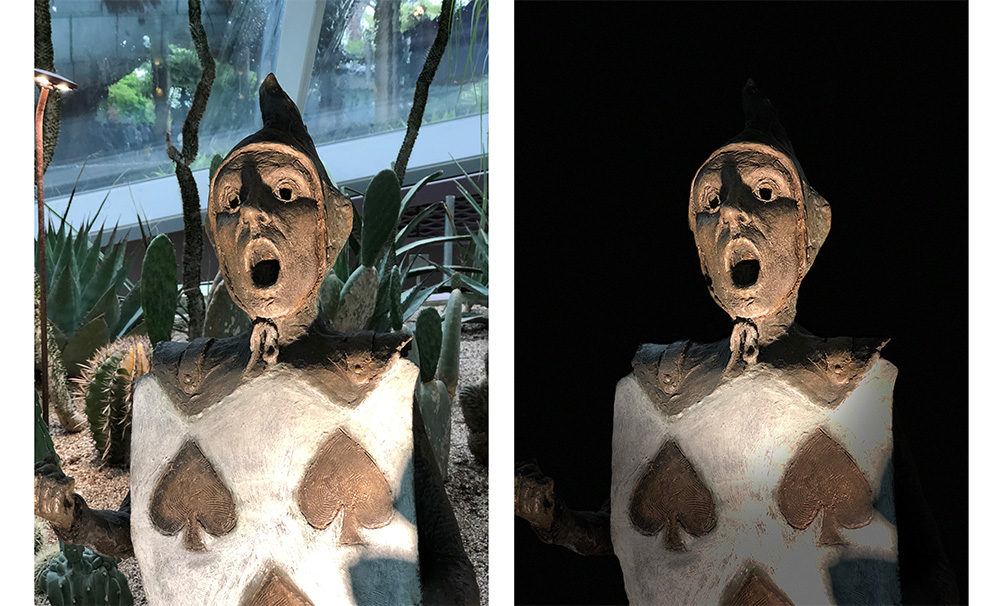 The best thing about Portrait Lighting is that you can always go back and change the effect you’ve applied. It’s more fun than I thought it’d be, makes people look great, and produces a far more realistic look than Mei Tu Xiu Xiu.

The iPhone has always excelled at shooting videos, and the iPhone 8 continues in this regard. Videos look more vibrant than they did on the iPhone 7 Plus, which may be a result of the new color filter, the new ISP, or both. The OIS is excellent, minimizing shaky videos to a great extent. Once again, however, it’s disappointing how only the wide-angle camera on the 8 Plus has OIS, as videos shot with the telephoto aren’t stabilized.

Rolling shutter is well controlled, and the new iPhones can now shoot 4K at 60fps, double the maximum frame rate of the iPhones 7. While 60fps offers increased clarity, it also gives me motion sickness. If you watched The Hobbit in cinemas at 48fps, you’ll know what I’m talking about. While high frame-rate videos look more true-to-life, they can also look like video games or shot for TV dramas with the super-smooth motion.

4K at 60fps also appears to be less forgiving when it comes to stabilization. While handheld video at 30fps looks quite steady, the same video at 60fps reveals so much more motion; including the small movements of your hands. While 60fps isn’t for me, I’m glad that Apple also included a 4K at 24fps frame rate, which is the frame rate that film is shot at.

iOS is eating the camera world

The iPhone 8 and 8 Plus have cameras that capture images with better exposure and more vibrant HDR images. The colors are true to life, in both stills and video, and video comes with an increased 60fps framerate at 4K. While images appear slightly sharper, it’s too bad that there’s no significant increase in resolution, and also too bad that the telephoto on the iPhone 8 Plus still doesn’t have OIS.

On the other hand, with Portrait Mode and Portrait Lighting on the 8 Plus, Apple once again demonstrates what you can do with full control over the hardware and software stack. Portrait Mode makes possible on a smartphone what was once only doable with a prime lens on a big camera. Portrait Lighting, which is only available on the iPhone 8 Plus and iPhone X, makes these same portraits look so much better.

While both modes are only faux simulations and are still buggy in some situations, the software is miraculously making possible what was once impossible without a ‘serious’ camera, and that’s nothing to sneeze at. And most importantly, they’re good fun to play with.