Since the iPad isn't a traditional notebook, we have no means of running our usual suite of benchmarks, hence we'll be elaborating in depth on the experience of using the iPad.

For starters, let's start with the system specifications of the iPad. Apple has been very secretive about the A4 chip that powers the iPad. All we know is that the Apple-designed chip runs at 1GHz and contains an ARM Cortex-A8 CPU and a PowerVRX SGX 535 graphics processing unit. Generally, it is mostly similar to the one found on the iPhone 3GS, except that it is running at a higher clock speed. On top of that, the iPad also gets 256MB of RAM and is available with 16GB, 32GB or 64GB of flash storage capacity.

As a result, the iPad is blazing fast and highly responsive since the operating system is a variant of the iPhone OS. Applications and videos launch and play almost instantly, and games showed no signs of lagging or dropped frame rates. It's really something you have to experience for yourself to appreciate, but suffice to say, we're sure most would be pleased by the speed and responsiveness of the iPad. 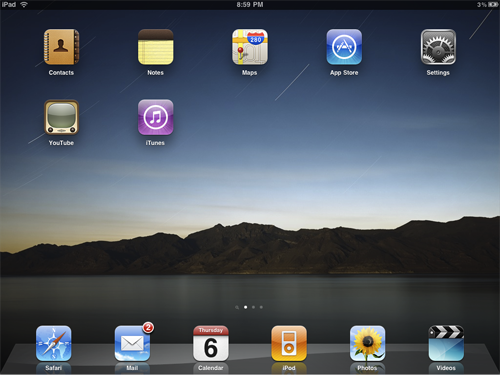 The iPad is also easy to use. Since its running on the iPhone OS, iPhone and iPod Touch users will hit the ground running, while first time users will also pick it up in no time since the iPhone OS is really user-friendly and intuitive.

Seeing that the iPad makes use of a touchscreen virtual keyboard, the large screen of the iPad helps make typing easier since the virtual keys are now larger. There's no haptic feedback though, but the iPad's screen is generally responsive, so this shouldn't be too much of an issue. It feels a little odd at first, but as you spend more time with it, you'll feel more comfortable.

The virtual keyboard can also be displayed in portrait or landscape mode. Personally, we prefer laying the iPad down and typing in landscape mode better as the layout and size resembles that of a traditional physical keyboard. You can hold the iPad upright and type in portrait mode with your thumbs too, but the size of the iPad makes it a tad tough to do so. 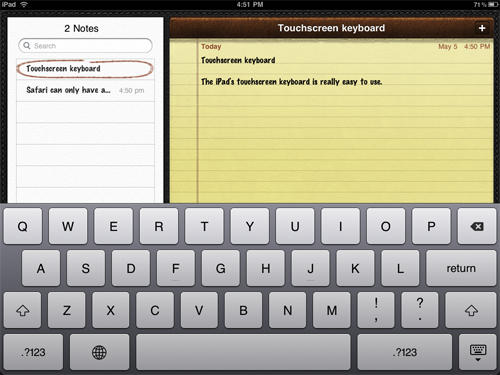 Generally, the virtual keyboard is easy enough to use and good for tasks such as updating Facebook statuses, sending tweets and replying E-mails. Writing a whole essay will be much more cumbersome because the main problem with the virtual keyboard, is that punctuation and numbers can only be accessed by hitting a key and switching templates. This means an extra stroke and can be frustrating for some users.

For those who find it difficult to type on the virtual keyboard, Apple also has a special keyboard dock for the iPad. But if you ask us, getting the keyboard dock defeats the purpose of the iPad since it is its multitouch interface that really defines the whole iPad experience.